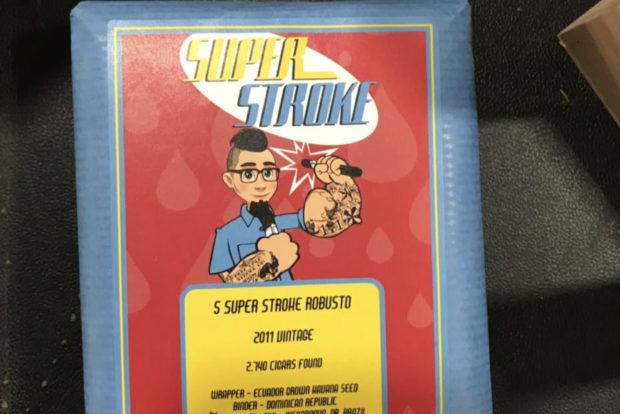 First there was a Caldwell Cigar Co. and Room101 collaboration, now there is a Lost&Found and Room101 project.

Matt Booth has teamed up with Lost&Found for “three very small limited releases,” the first of which is named SuperStroke. It’s offered in both Corona (5 3/4 x 43, $10.50) and Robusto (5 x 50, $11), using an Ecuadorian sun grown wrapper over a Dominican binder and fillers from the Dominican Republic, Brazil and Nicaragua.

The project is limited to just over 5,000 cigars between the two sizes.

“I am excited and honored to be involved with these upcoming releases from the LNF series,” said Booth. “I have always admired the Lost&Found concept seeing it as a truly unique project. Traveling with (Robert) Caldwell to the DR, I got bit by the vintage bug and wanted to develop a couple of cameo projects. The idea is to give consumers some vintage product that fits my palate.”

Lost&Found is a project started by Caldwell, Tony Bellatto and Jaclyn Sears. Typically, Caldwell goes into factories and purchases cigars that were previously rolled, but not sold for a variety of reasons. Many of these cigars are small quantities of limited editions and other releases that have continued to age in factories. While most are difficult to pinpoint, some have been seemingly obvious like the Pepper Cream Chocolate Crush, which appeared to be the Camacho Liberty 2007.

“Matt and I have been boys for years,” said Caldwell. “We have a natural flow in our friendship and working life. I’m glad to have him on this project for these series. It will be really cool for the 101 enthusiasts to have a chance to enjoy Matt’s take on this project. This is Lost&Found by Booth.”

Last year, Booth and Caldwell teamed up for two releases: Hit & Run and The T. Earlier this year, Booth’s Room101 announced Farce, which will be distributed by another of Caldwell’s companies.