In January 2015, Room101 announced the Ichiban Series, heralded by Matt Booth as “one of our finer works over the past five years and a recipe that I have been holding close for a while; waiting for the right time, the right project and the right people to share it with.” The series would be made up of eight store exclusives, each a unique size of the Ichiban blend with up to 1,000 boxes of ten cigars produced for each release.

The fourth retailer selected for this series was STOGIES World Class Cigars in Houston, Texas, and for those who know about owner Jorge Ahued’s leanings towards cigar vitolas, it should come as no surprise that he picked a lancero. The 7 x 38 Mutante, one that has appeared in a number of Room101’s other lines, arrived on June 18, 2015, with just 600 boxes of 10 cigars produced.

While the Room101 Ichiban Mutante bears the store’s name, it isn’t part of STOGIES’ H-Town Lancero series, a 10-cigar set that features ten different blends in the long and slender vitola. Had it been, it would have been the second Room101 in the series, with the Room101 Namakubi Ecuador H-Town Lancero released in 2013, but per the rules there’s only one cigar per manufacturer in that collection.

Here’s what I said about the Room101 Ichiban Mutante when I reviewed it in August 2015:

The idea of releasing of the Room101 Ichiban Series in a lancero format seems almost perfect for STOGIES World Class Cigars, though the actual result falls a bit short for my palate. The opening note is a head-scratcher, and while the cigar gets better from there, it doesn’t take off on my palate like a number of other Room101 blends have done, instead choosing to find a familiar place in the first third and then holding to it with a few subtle highlights. A solid, if not quite stellar release, at a very reasonable price.

I often bring up the aspect of ceremony when it comes to getting a cigar ready to be smoked, and the Room101 Ichiban Mutante presents several layers of opportunity, beginning with the outermost paper wrapper which can either be slid off the cigar, or as I prefer to do, opened by slicing the small piece of tape that holds it together. After that, a piece of tissue paper must be removed, twisted at both ends to hold it in place and straightforward in its invitation. Underneath that wrapping lies a slender cylinder of tobacco wrapped in a mocha colored Ecuadorian capa leaf. There are a few small veins, clean seam lines and just a few spots where the color isn’t perfectly uniform, with an open foot and compact cinnamon bun cap made out of the tobacco at the head. The foot offers aromas of chocolate, French bread and a woody note that falls somewhere between wet tree bark and firewood. The cold draw is a bit firm but not tight, presenting a subtle suggestion of peanut butter and a slightly oily taste.

The Room101 Ichiban Mutante starts with a subtle but firm greeting of pepper that goes for the big part of the tongue, but that’s not what makes the first puffs of the cigar so interesting; rather it’s a complex aroma that brings the pepper together with smoky earth and leather and grabs the attention. A bit of cream and chalk come in as the bright white ash builds impressively, holding for an inch or so before my nervousness takes over and I tap it off to avoid an unexpected detachment. While smoke production isn’t abundant and tends to shut down quickly after a puff is taken, it is decent for a lancero and carries a still subdued flavor that has white pepper stands out but for the most part creates a softer profile and for some reason has me thinking of chocolate milk due to both the creaminess and very subtle cocoa powder. That flavor carries the Mutante through its midpoint and into the second half while the burn line remains fairly even, with only an inattentive rate of puffing leading to any issues with combustion. 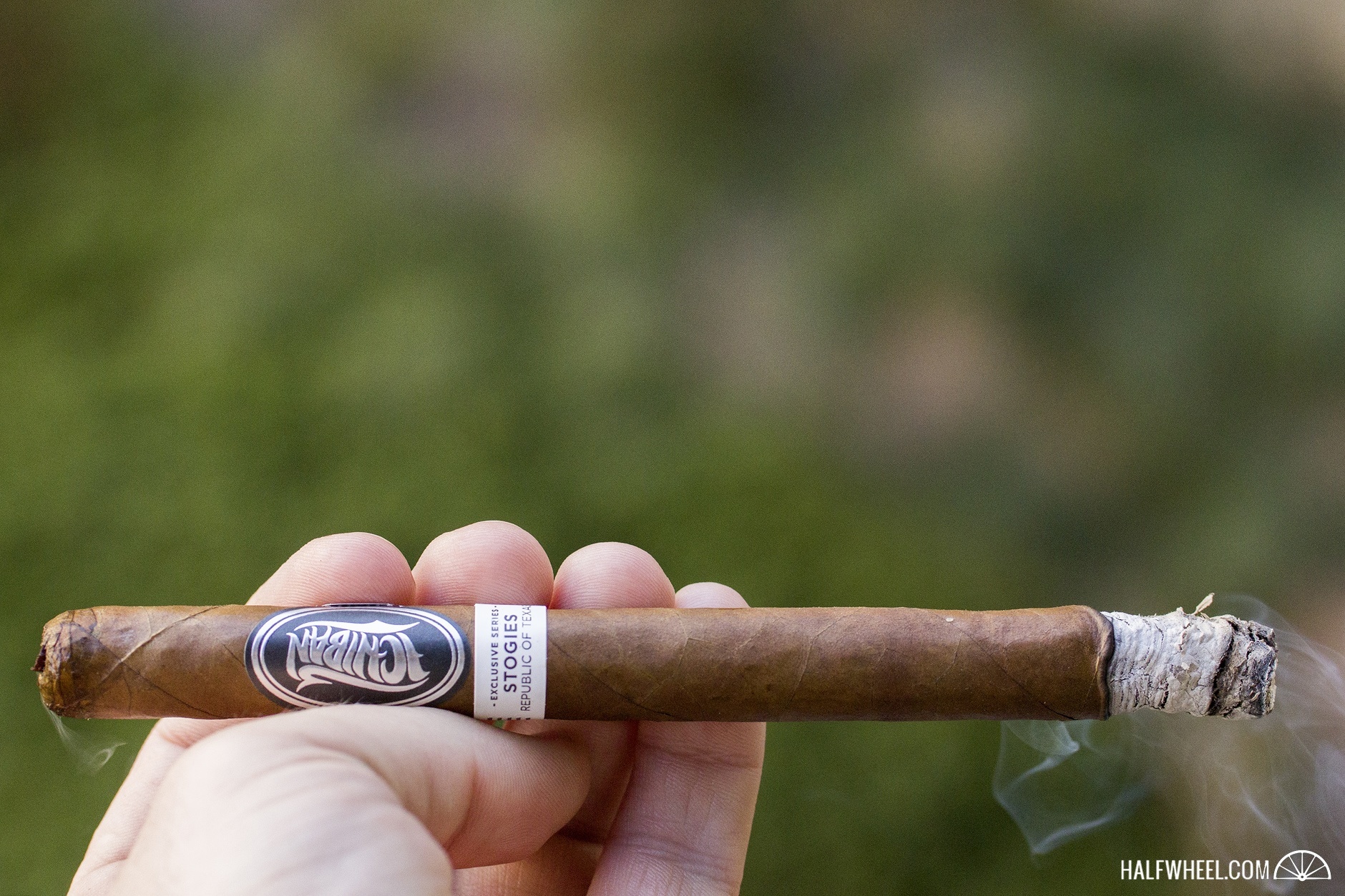 Black pepper begins to emerge and roughen up the fairly smooth profile as the second half of the Room101 Ichiban Mutante gets underway, pushing the creamy sweetness out of the way for a much more soil driven note that is dry and has rocky tones to it. It’s a flavor that sits on the fence with me as it’s certainly palatable and enjoyable, though the fairly sudden departure from the subtleness of the first half is a bit more of a pivot than I would have preferred. This rougher texture takes the cigar into its final third, gradually welcoming the chocolate back into the equation  with just over two inches left though the creaminess seems lost to history. It’s not quite the cocoa powder manifestation anymore either, shifting a bit darker and fuller but without the bitterness of dark chocolate. This represents a fairly sweet spot of the cigar so far, as all the elements are interacting well and none seem intent on trying to outdo the others, resulting in a good half inch’s worth of balance and complexity. Pepper begins to upset that a bit in the final inch, stepping forward and expanding on the palate and into the back of the throat for one last flirt with roughness, while also making an appearance in the nose via retrohales, but in a much brighter and cleaner expression that seems to draw in a bit of white pepper and mineral. Depending how much you want to let the pepper make one last run at your senses, the Ichiban Mutante can get smoked fairly far down as heat doesn’t become a factor and combustion remains worry-free.

While I didn’t find the Room101 Ichiban Mutante to be much of a flavor journey when I first smoked it, a bit of time has helped create a bit more of a path from start to finish, though it hasn’t yet paved over the rougher parts of the road. The difference between the sweet, chocolate and cream portions and those of robust pepper and earth seem just a bit too far apart to be joined successfully, and the bridge between the two comes abruptly and without an easing in period, which only further highlights their disparity. While I didn’t experience it during the cigar, a bit of a nicotine hit caps off the experience and leaves one final and lasting impression. The cigar has certainly gotten better with six months of rest, but it still falls a bit short of being one of Room101’s better offerings for my palate.