Back in 2012, Matt Booth released his annual limited edition for Room101, a new blend called Daruma that uses a Ecuadorian habano wrapper, as well as a Brazilian mata fina binder, and fillers from the Dominican Republic and Honduras. Like many of his cigars, it has roots in Japanese culture and philosophy.

The names comes from a doll that is created in the likeness of Bodhidharma, founder of the Zen sect of Buddhism. It’s seen as a talisman of good luck in Japanese culture, representing encouragement and perseverance.

In the original boxes of the Room101 Daruma was a small booklet that elaborated further:

The single eye I have penciled in on my Daruma doll is my silent reminder that I have set a goal that is pending completion. My Daruma will become a bi-oculared character once my task is complete. I have one year in which to complete my task – and if one of my attempts should fall short of victory I will not quit, but rather try again. Because, I know that if I do not give up and my will does not falter it is never a question of “if,” but only a question of “when.” We have named our latest series after the Daruma as he symbolizes resilience – a key ingredient to our success. Use your Daruma to set a goal of your own.

Fill his left eye when you have decided what you will be committing yourself to, his right when your task is complete. As the tradition is to burn the Daruma at the end of the year, take a brief moment to ignite a fine cigar in celebration of your accomplishment.

Now get back to work.

Recently, it was announced that The Humidor Cigars & Lounge in Wichita, Kan. had received its own version of the Room101 Daruma, dubbed the Nappy B. 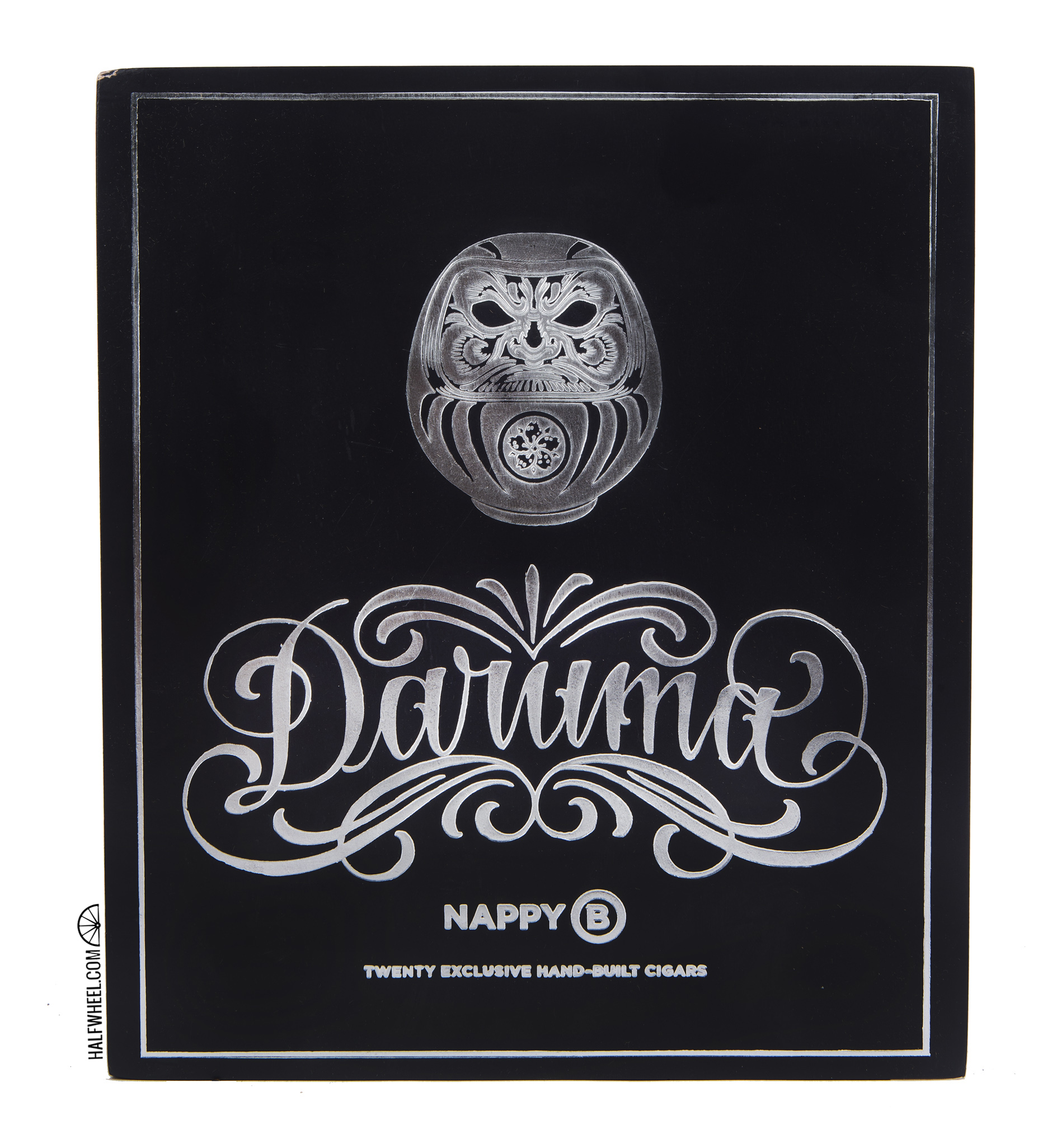 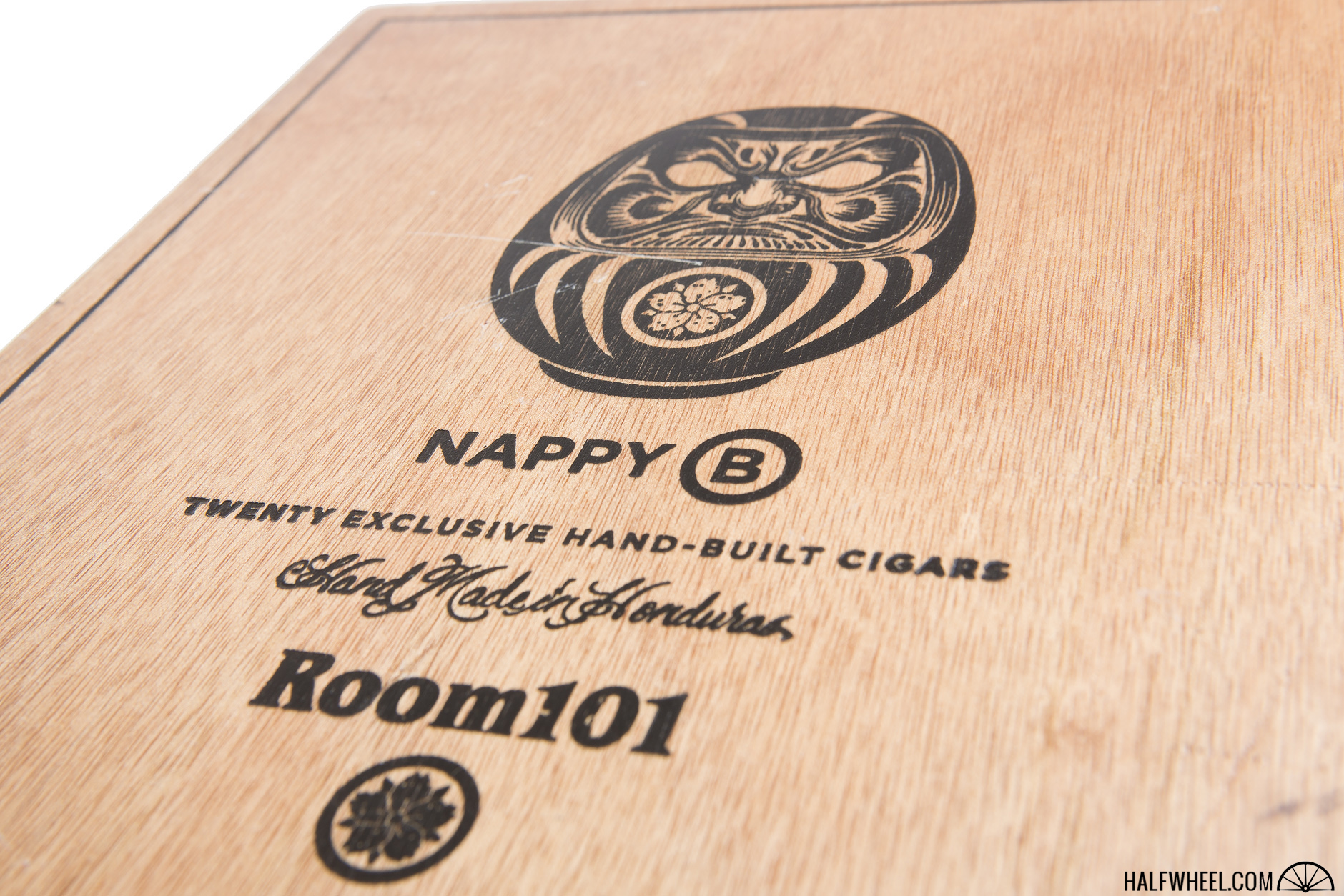 Inspired by the original Room101 Daruma, the Nappy B replaces the original’s Ecuadorian habano wrapper with a Mexican San Andrés leaf, while swapping out the Brazilian mata fina binder on the original for one from Honduras. It comes in two sizes, the Papi Chulo (4 x 42, $6.50) and Torpedo (6 x 54, $9.50), both of which undergo a year of aging after being rolled. 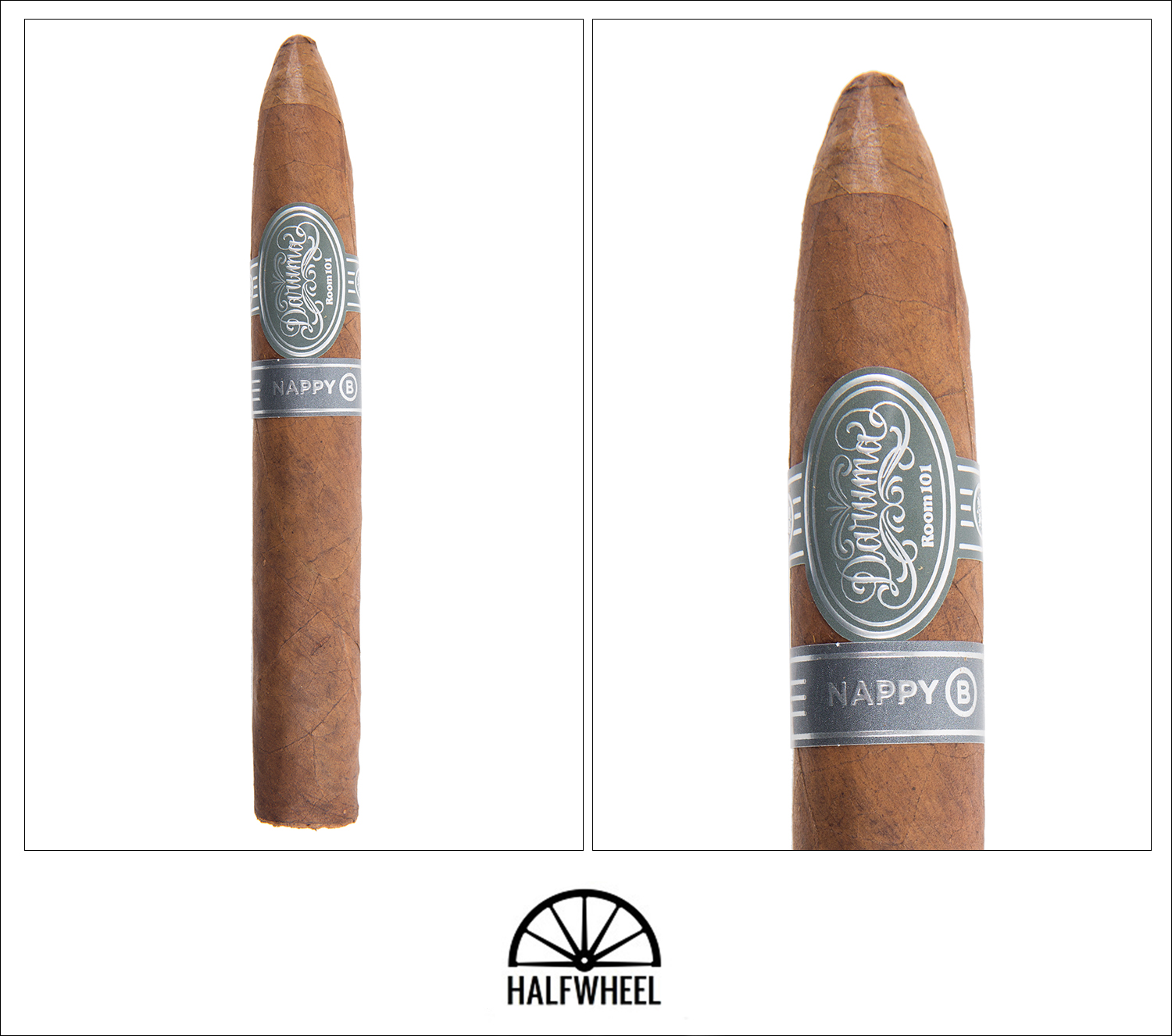 For fans and critics of the pyramid vitola, the Room101 Daruma Nappy B should certainly pass the test; it’s a thick cigar with what feels like a bit bigger ring gauge than normal, but the roll quality appears more than adequate. The head is a bit on the flat side and there’s the occasional glue spot, but otherwise it’s a cleanly rolled figurado with clean seams and a fairly standard vein structure. One cigar managed to get banded backwards, it appears, as there is a sizable vein coming up from the top of the Daruma band to the head of the cigar. Skewing to the firm side, there is just a bit of give, and its a consistent feeling underneath the dry, earthy brown wrapper from head to foot. From the foot I get a mix of sarsaparilla, graham cracker and vanilla ice cream, almost like an ice cream float but without the coldness and with the occasional peppery kick. As I do with most figurados, I take off a fairly small amount of the cap to start, which gives me a slightly firm cold draw. It’s a much more subtle offering than the aroma, with a bit of graham cracker sweetness standing out most prominently on top of sweet leather and minimal pepper.

I can’t say I find tons to write about from the first puffs of the Room101 Daruma Nappy B, despite the fact that there is some sweetness and earthiness in the profile. While there is pepper present as well, it doesn’t reach out and take control of the senses until the first retrohale, and even then the term take control might be a bit generous, yet after about a quarter of an inch has burned, it becomes a bit less generous and more accurate. I begin to get a bit of pepper in the nose, while some underlying citrus sweetness and dry, almost dusty earth continues to be part of the equation. That pepper moves south to the back of the throat fairly quickly, bringing a bit of harshness to the early goings of the cigar. With the fairly small cut to the cap, the draw is just a bit firmer than I might generally prefer, but I’m okay with where it is at the moment; while smoke isn’t billowing from the foot, the amount is sufficient though the texture can be a bit thin at times. The harshness fades quickly and frees up the cigar to put off an aroma that has near equal roots in orange citrus and thin but sharp black pepper. It’s that black pepper that seems to be leading the evolution of the flavor and profile, both of which are in the medium category with strength leaning medium-minus. With the first inch of ash gone, the cigar adds a touch of sour chalk to the palate while pepper grows in the nose amidst a bit of warm peanut butter. 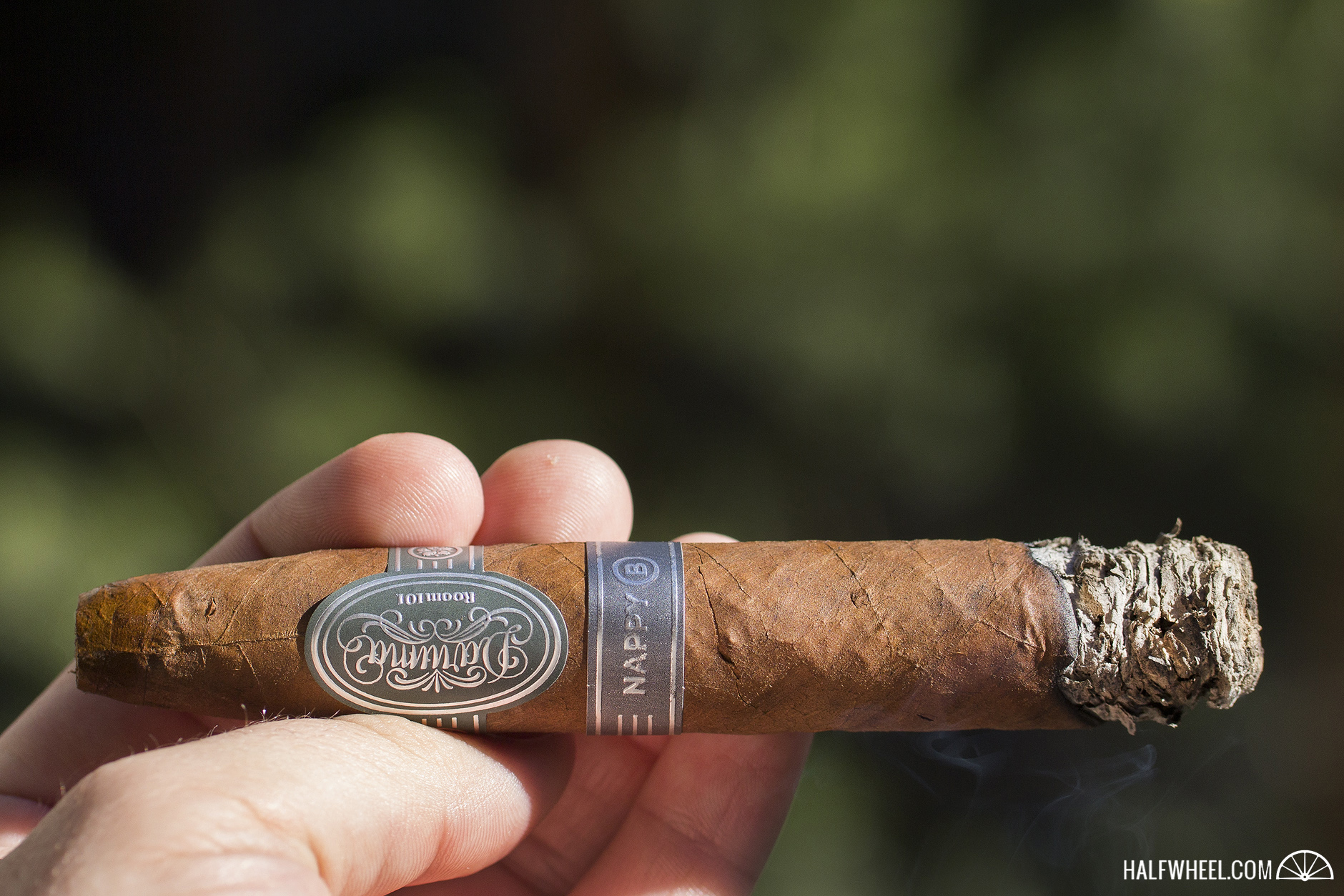 There is still plenty of pepper for the nose at the start of the second third, while I’m still wanting for a bit thicker texture from the smoke overall. Pepper continues to build in the nose and on the palate, and while nicotine isn’t much of a factor, the pepper has gotten strong enough to make you feel the cigar much more than it did in the first third. Behind that I get a bit of earth and some dry graham cracker, but the sweetness is more or less gone, or at least lost behind the pepper. Burn issues become a bit of a problem around the midpoint, as combustion slows to a crawl and I find myself needing to relight the Nappy B more times that I would like. When it is burning, the draw has found a very good spot, neither too tight nor too loose, while smoke production is sufficient and the burn line stays fairly even, though the ash began to flower quite a bit in one sample. Flavor wise, pepper is still guiding the overall offering with a thin but sharp taste that lingers on the palate for several seconds. Through the nose, it’s sharp as well, though without the somewhat metallic edge that hits the palate. 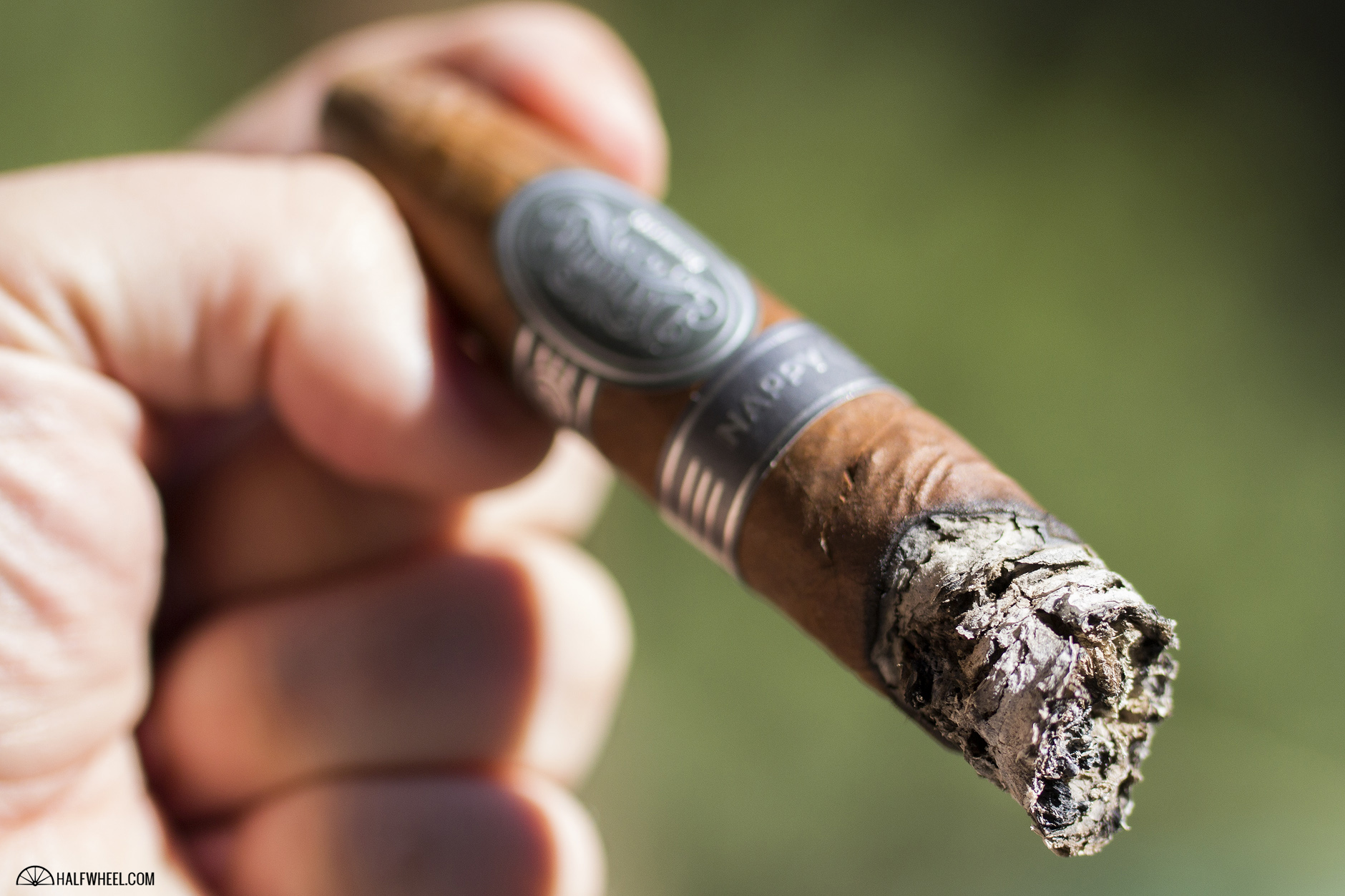 Moving into the final third, I begin to get a more prominent note of warm peanut butter from the aroma, and in particular the smell of warm peanut oil. There is still a good bit of bite from the pepper when the smoke hits the palate, and while the pepper has backed off just slightly, it has only cleared the way for more of the sour, somewhat metallic and somewhat chalky taste to emerge. Burn issues continue to be part of the experience, though not as prominently as in the second third, while the combustion rate still leans toward being dubbed a crawl. The final inch or so shows continued dry earthiness that leaves a lasting tingle on the lips and tongue, followed by more metal and thin black pepper. As much as I want to smoke the Room101 Daruma Nappy B down further, I find myself letting it go with well over an inch left, both out of fatigue and a feeling that it won’t get much better with heat becoming more of a factor. 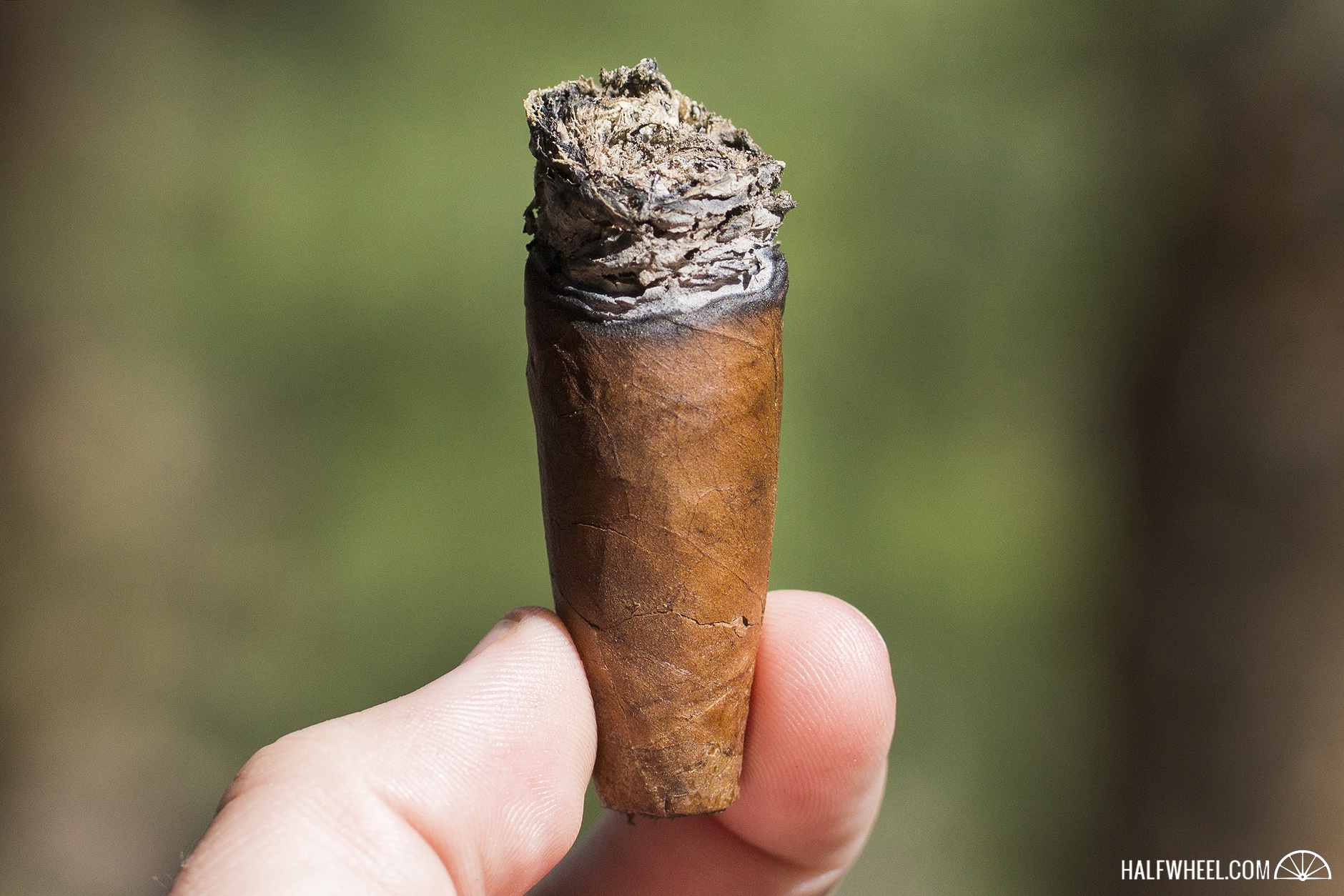 Given how well the original Room101 Daruma Mutante scored in its original review, redux and in the Top 25 of 2012 list, plus that it was the #9 cigar on the 2012 Consensus, I couldn’t help but have high expectations for this cigar. Four samples later (three of the Torpedo vitola and one of the Papi Chulo), I don’t know what to make of this incarnation. At one level, the burn issues lead me to believe it simply wasn’t ready to be smoked. At another level, I wonder if the tobacco used for this batch simply didn’t match up with the quality of that used in the original. Then I realize that this isn't the same Daruma as the original, as the wrapper and binder have changed, and to compare the two is apples and oranges, which is a shame given that they wear the same primary band. I’m holding out hope that a bit of time will get these cigars where they need to be in terms of flavor and combustion, as it would be a shame to tarnish the Daruma’s reputation with these inferior samples.