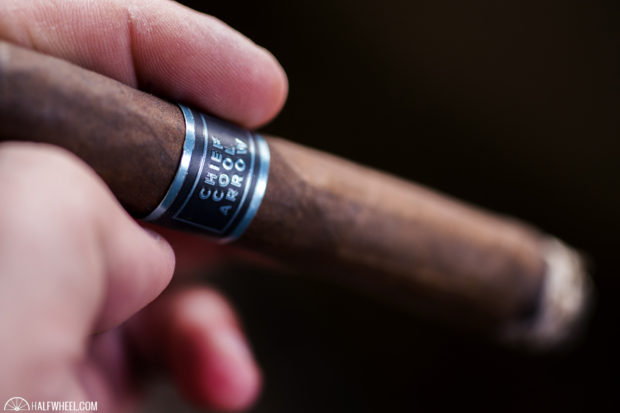 Last week, Room101 owner Matt Booth announced that he and his Room101 brand are leaving the cigar business. However, during the 2016 IPCPR Convention & Trade Show, the cigar company made another splash with its release of Chief Cool Arrow, mostly due to the Mexican wrapper and Pennsylvania leaves in the filler, which are far from a normal offering from Davidoff and its other brands.

Room101 Chief Cool Arrow is composed of a wrapper leaf from Mexico, a Honduran binder and filler tobaccos from Dominican Republic, Pennsylvania and Nicaragua. The new line was launched in three different vitolas packaged in boxes of 20 and prices ranging from $12.50 to $14.50 each. The Fileokee and Chingonimo vitolas are limited to 1,000 boxes each, while the Ranflajo size had a larger release of 1,500 boxes. The cigars were rolled at the Agroindustria LAEPE S.A. factory in Danlí, Honduras and began shipping to retailers on July 25, 2016.

Raider of the sacred leaf, Chief Cool Arrow doesn’t care what you call him, as long as you call him. So call this tasty tobacco treat your new favorite, and call often. Surrender to its aggressively romantic flavor profile that will tantalize every molecule of your being. Constructed with semi emotionally stable, non—bipartisan, low viscosity all natural tobaccos from hither and yon. Give your taste buds that back alley diddling that you have always fantasized about, yet were too conservative to act upon your semi pervy wanton desires. Chief Cool Arrow is your main man of flavor and another step in your galactic quest for relaxation. 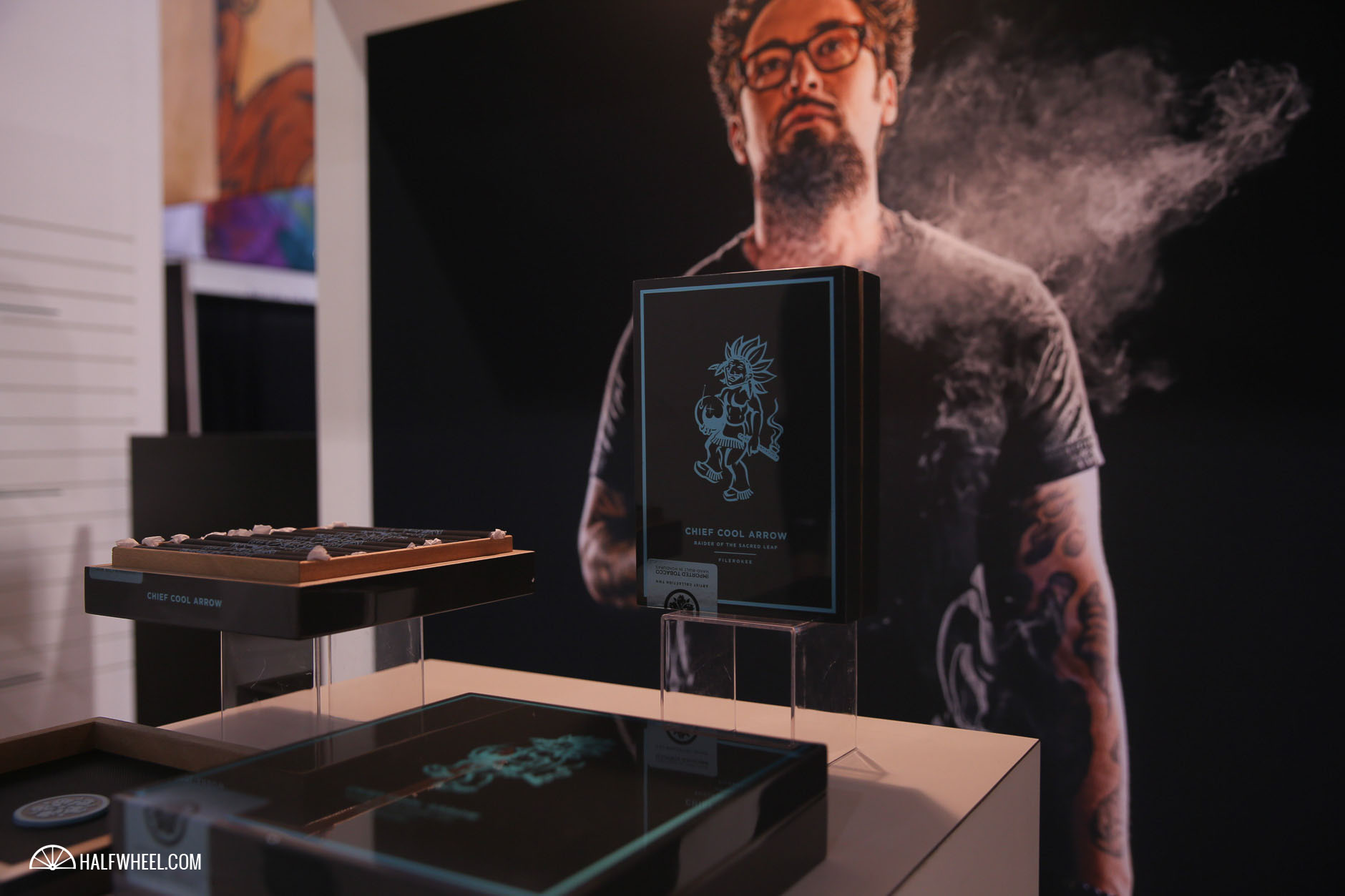 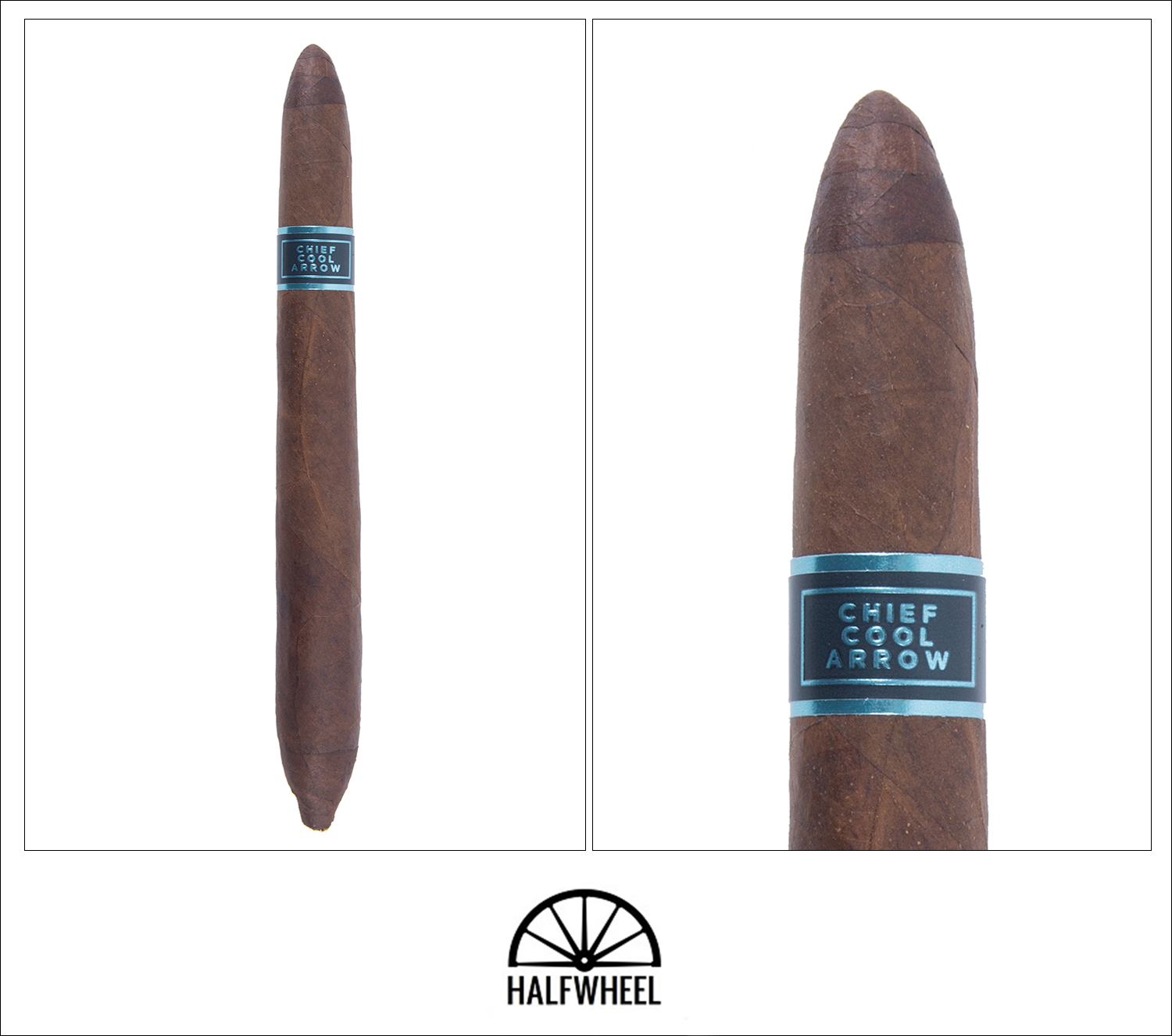 The double perfecto is an impressive specimen with a bulbous foot and pointed cap covered in a dark espresso brown wrapper that is sandpaper rough to the touch. The cigar is quite spongy when squeezed and while there is a bit of oil present, there are also a number of prominent veins running up and down the length. Aroma from the wrapper is a combination of combination of hay, strong earth, leather and black pepper with just a hint of nuttiness, while the cold draw brings flavors of strong orange citrus, leather, grass, dark chocolate, espresso beans and cedar.

The flavors in the Room101 Chief Cool Arrow Chingonomo come fast and furious right off the bat including a dominant combination of dark chocolate and orange citrus brought over from the cold draw followed by a deep earthiness, dark cocoa, bitter espresso and strong leather. In addition, there is an indeterminate sweetness that lingers on the tongue, but it is not strong enough to identify as of yet that is present on the retrohale and an interesting—and thankfully slight—vegetive note on the palate. The draw is a bit on the firm side and the burn is a bit wavy, but neither are unusual for a perfecto. Strength-wise, the Room101 ends the first third about halfway to the medium mark and does not seem to be letting up anytime soon. 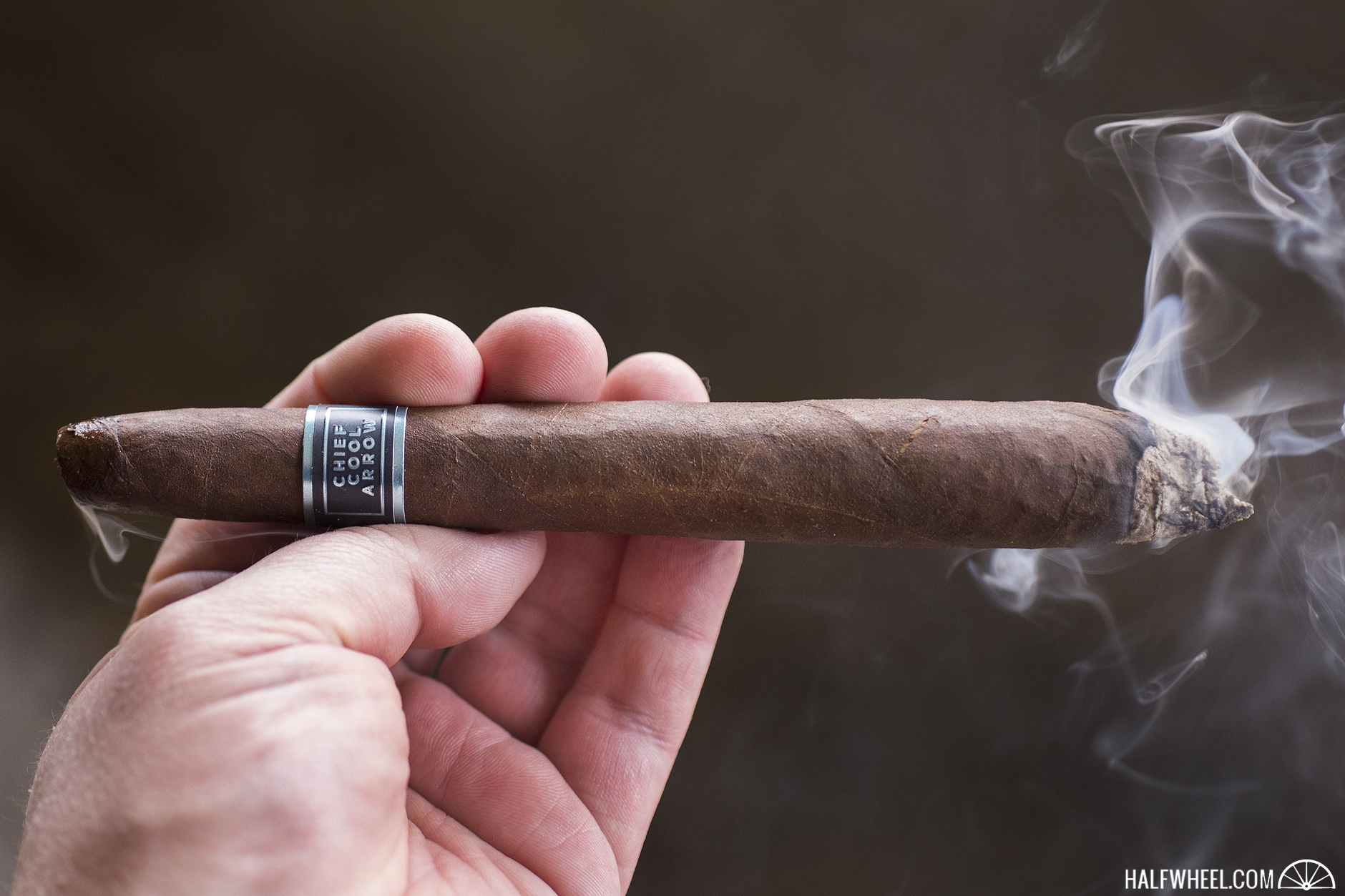 It’s pretty much the same during the second third of the Room101 Chief Cool Arrow with the dark chocolate and orange citrus fighting back and forth for dominance. Other notes of leather, cocoa, hay and cedar flit in and out in the background, along with a slightly more noticeable sweetness on the finish that is still not strong enough to place. There is a nice amount of black pepper on the retrohale that seems to be increasing as the second third burns down and the smoke production has remained constant. Thankfully, the burn has evened up nicely and draw has tightened up and while the strength has not increased as much as I thought it might, it still easily hits the medium mark by the end of the second third. 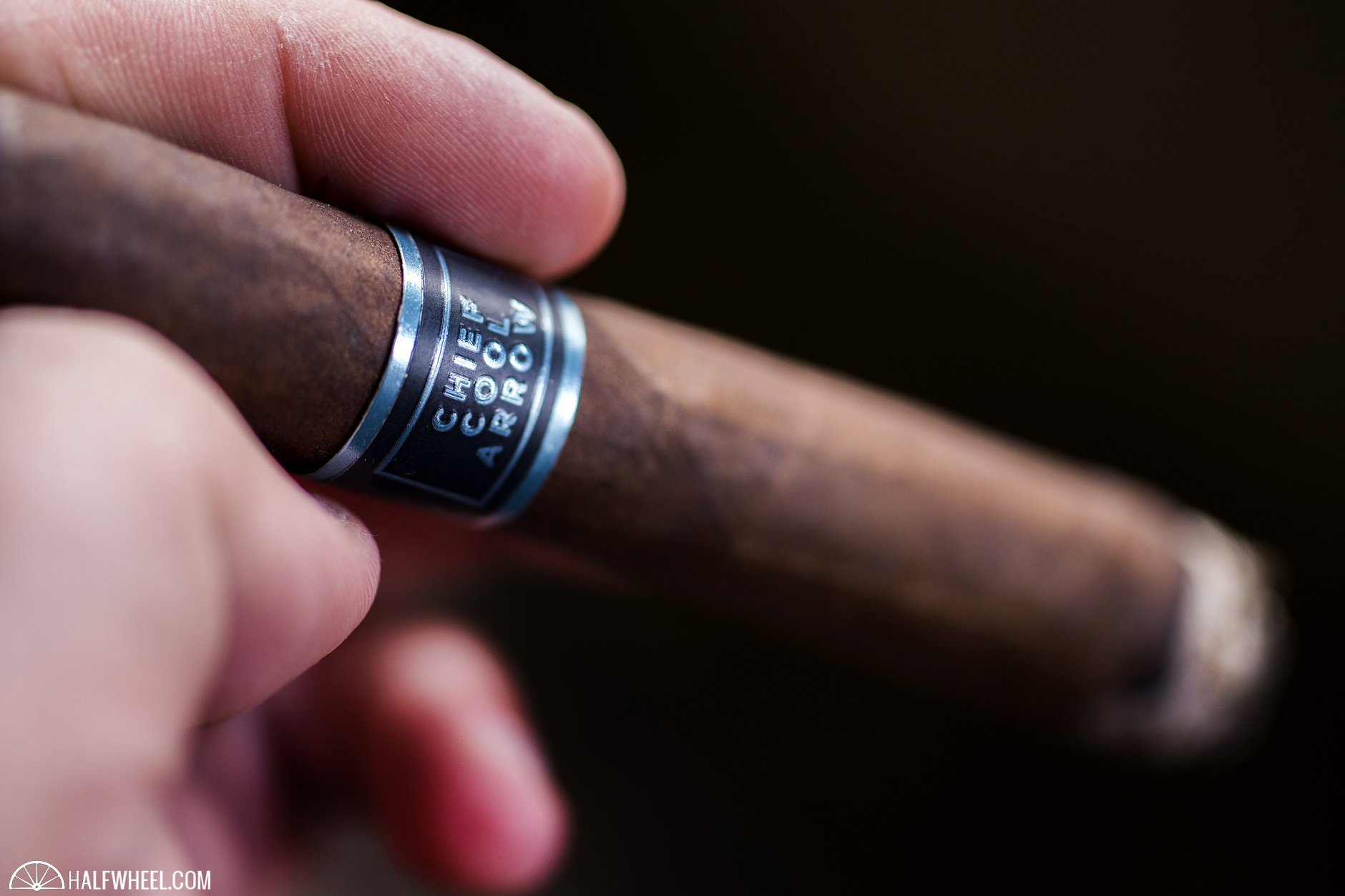 The final third of the Room101 Chief Cool Arrow features the same dark chocolate and orange citrus as the first two thirds, although in different amounts with the dark chocolate in becoming dominant and the orange citrus takes a back seat. Other notes include dark espresso, cedar, earth, slightly creamy nuts and just a tad more sweetness on the finish that reminds me of nutmeg as well as a bit of mint. The retrohale still features some black pepper, but it is not even close to as much as was in the second third. Both the burn and draw continue to impress. While the strength increases compared to the second third, it falls just a touch stronger than medium by the time I put the cigar down with a bit more than an inch left. 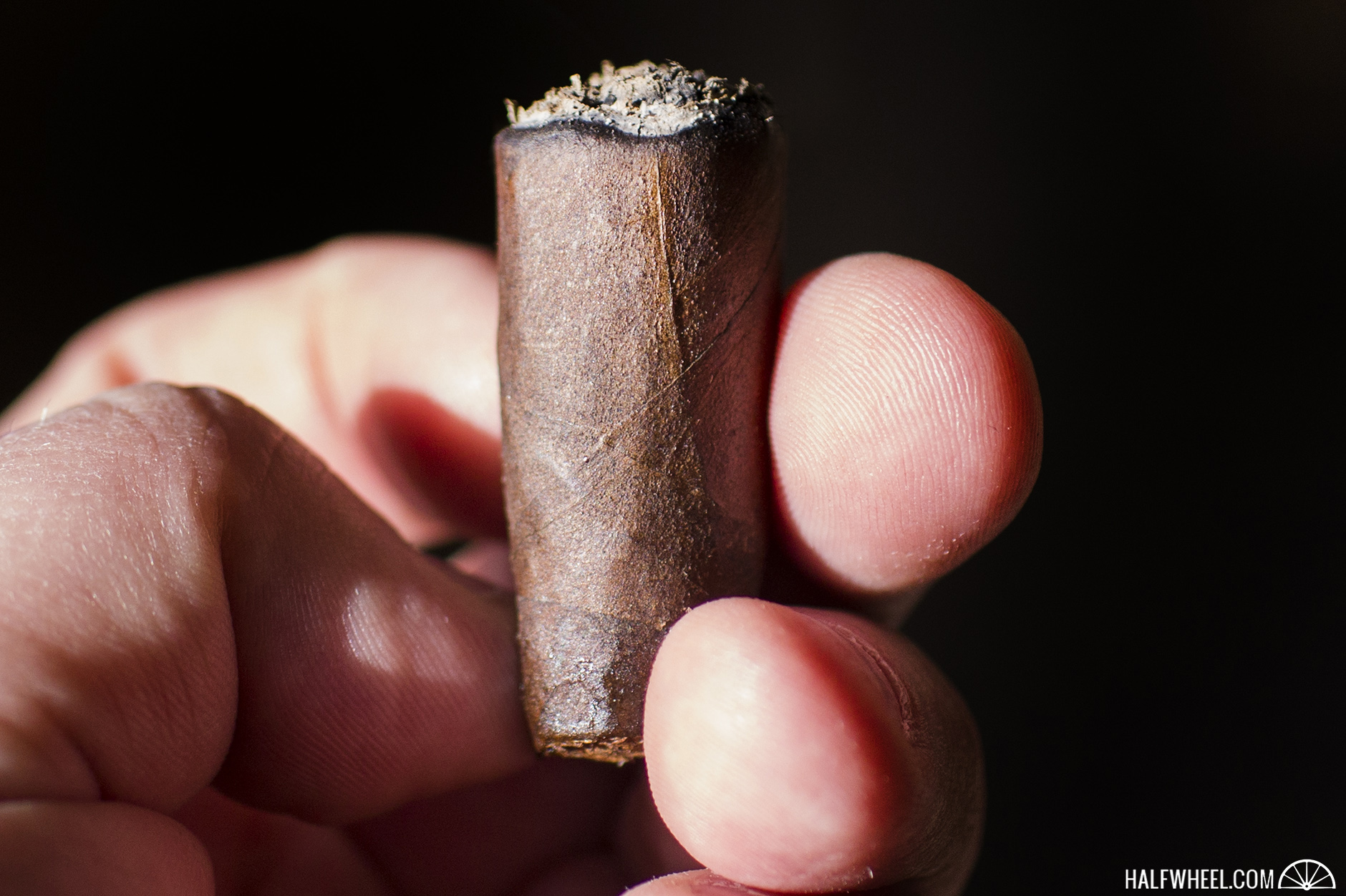 I do love cigars with complex profiles, and there is no doubt that the Room101 Chief Cool Arrow has that in spades with flavors bouncing around from one second to the next, seemingly changing on almost every puff. However, what the cigar does not exhibit is balance. All of those aforementioned flavors actually became a bit distracting after a time, something that was only exasperated by the more than two and a half hour smoking time. If you are looking for an incredibly complex cigar, look no further, but you will probably get palate fatigue before you put it down for the last time.