Measuring 6 3/8 x 52, the Romeo y Julieta Romeos is one of a multitude of cigars that the Romeo y Julieta marca introduced sometime prior to 1960. It was discontinued in the 1970’s and was not seen again until 1999, when it was released in the Siglo XXI Millennium Humidor, then again in 2000 for the 125 Aniversario Humidor.

In 2008, Habanos S.A. released the Romeo y Julieta Romeos vitola again in that year’s Réplica de Humidor Antiguo (Replica Antique Humidor) series, which consists of extremely well-made and expensive replicas of antique humidors that include cigars rolled in vitolas within specific marcas that are either discontinued, never released or previous special editions. 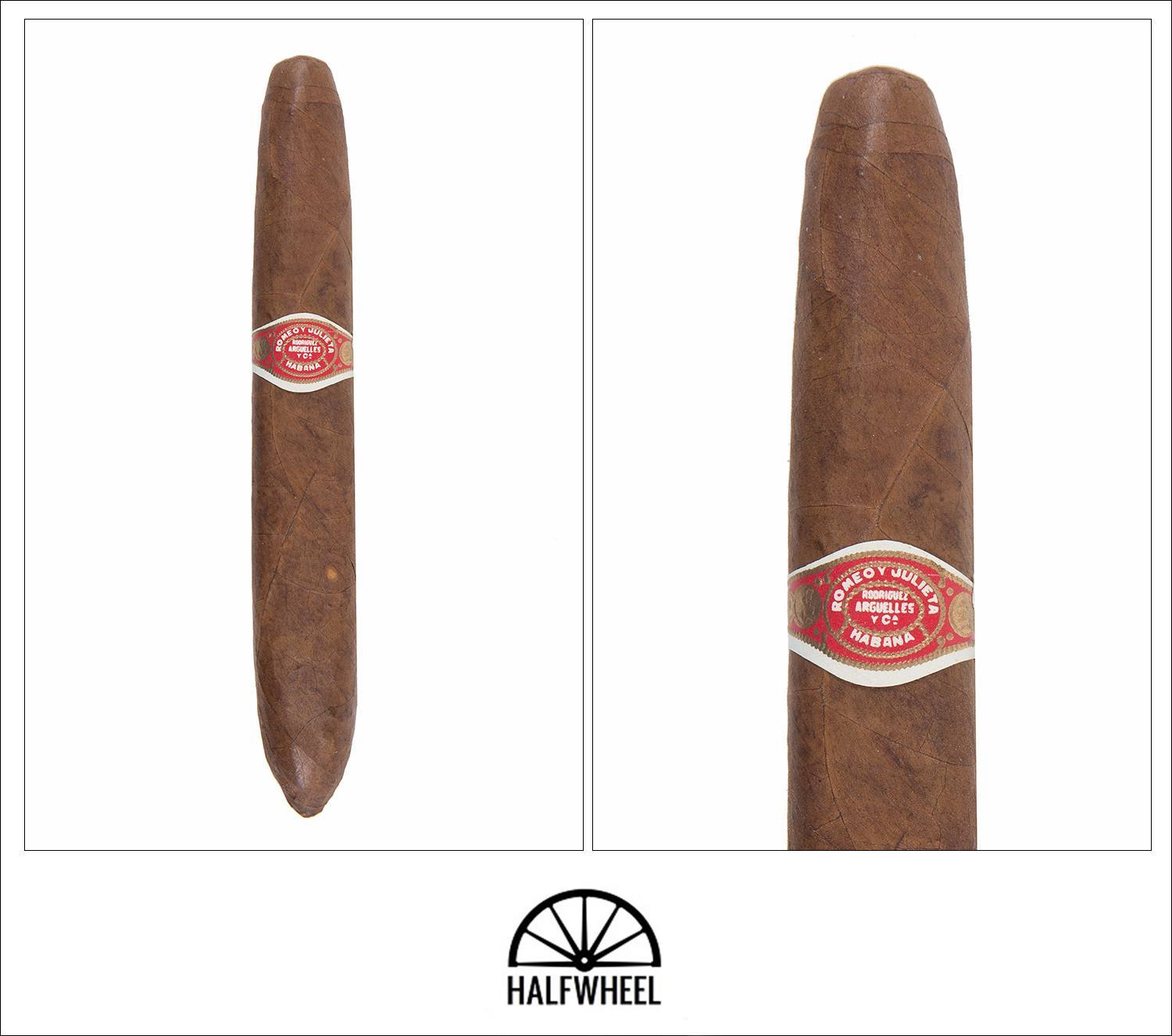 The Romeo y Julieta Romeos is visually striking and seemingly perfectly constructed, with a perfecto tip foot on one end and a rounded cap on the other. The wrapper is a slight reddish brown in color and is silky smooth to the touch, while the cigar has some nice give when squeezed. Aroma from the wrapper is surprisingly strong combination of cedar, leather, manure and coffee while the cold draw brings flavors of distinct orange cream soda along with oak, chocolate and gritty earth.

The Romeo y Julieta Romeos starts off with a distinct bitterness on the palate and the finish, although other flavors of aged leather, oak, dark chocolate and a bit of barnyard manage to break through intermittently. There is a very slight generic sweetness that comes and goes on the finish, but it is just not strong enough to impact the overall profile in any major way as of yet. Construction-wise, the draw is excellent, even at the beginning of the perfecto tip, while the burn is also quite good. The smoke production is about average, and while I can notice some strength, the level does not come close to the medium mark by the end of the first third. Coming into the second third of the Romeos, the flavors in the profile are basically unchanged from the first third, with the same aged leather note remaining dominant, and a combination of wood, bitter cocoa, hay and barnyard flitting in and out. The generic sweetness is still present on the retrohale, and has even become a bit stronger, but it still not distinct enough to place as anything specific. Both the burn and the draw continue to impress and the smoke production has increased slightly. The overall strength however has not, still falling well short of the medium mark. 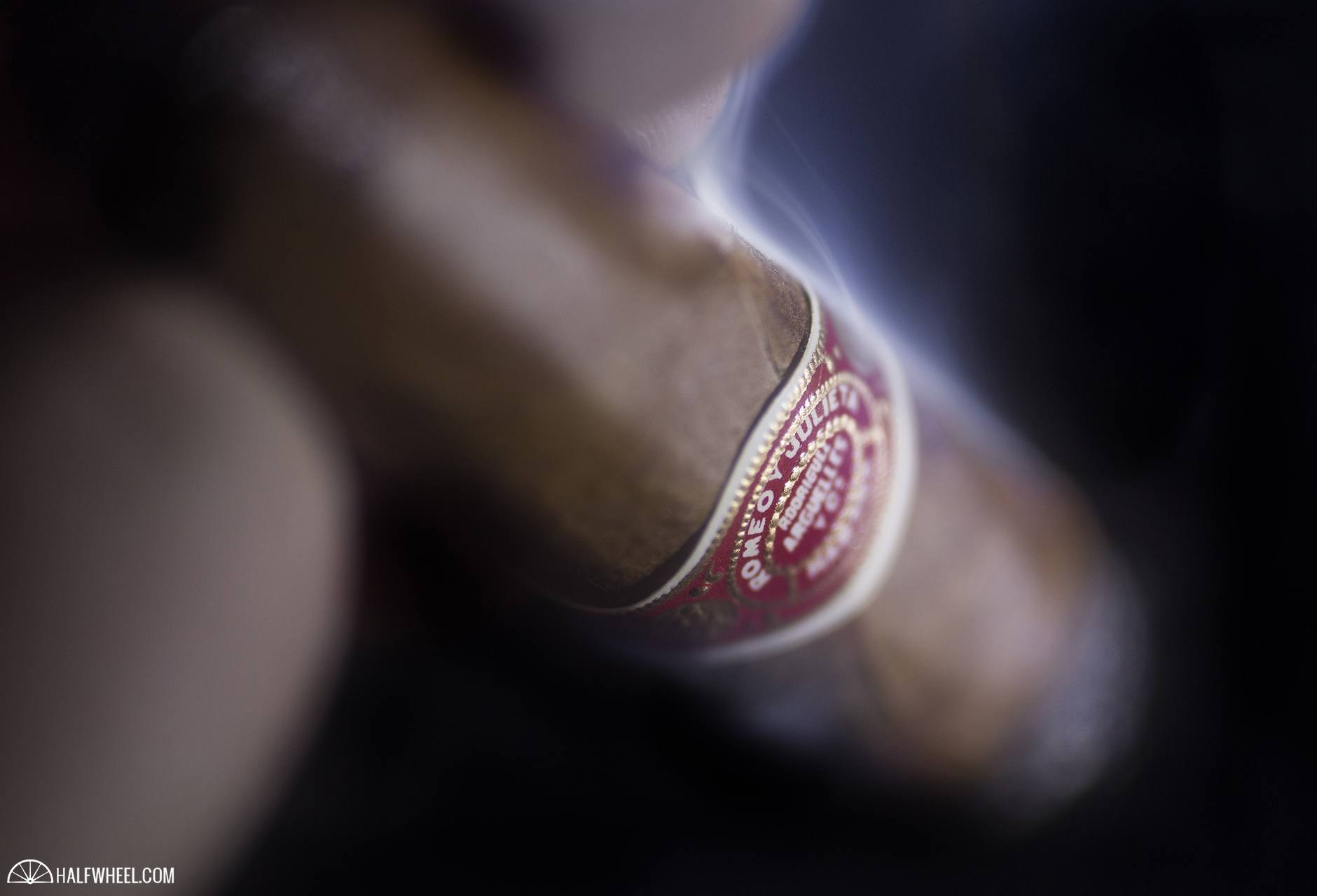 The final third of the Romeo y Julieta Romeos stays the course for the most part, still leading with the aged leather note that I have become so familiar with. The profile does add a touch of creaminess at points, but the other flavors present remain the same hay, barnyard, dark chocolate and oak, with only the strength of each changing. The sweetness that was present in the prior two thirds has finally given up the and disappeared, as has most of the smoke production. Both the burn and draw remain a high point of the cigar and the strength finishes the cigar somewhere close to the medium mark, but never threatened to go over. Honestly, I was hoping that my second go around with this vitola from Romeo y Julieta would be better than my first experience, but that was just not to be. Unfortunately, the unique cold draw and the construction were the high points of this cigar. While the profile was not offensive in any way, it really did not have any flavors that stood out in a significant way, and was fairly monotonous for the entire two hour smoking time. A joy to smoke for the experience of smoking a 45-year old Cuban cigar, but not something I would suggest spending the amount of time or money it would take to track one down.