In late 2017, Habanos S.A. announced a new line called Habanos Línea Retro, Spanish for retro line. It was announced with two cigars, the Partagás Capitols and Romeo y Julieta Club Kings. Both are to offered in the classic Marevas vitola, a petit corona that measures 5 1/12 inches (129mm) long with a 42 ring gauge.

For those intimately familiar with the sizes that each brand’s portfolio contains, both already have cigars in that size. For Romeo y Julieta, there’s the Mille Fleurs, while Romeo y Julieta has had the Petit Coronas and the Cedros de Luxe No.3.

The notable difference is the packaging, as both are packaged in tins of five cigars. What’s interesting is that this release is a throwback, as both cigars were previously sold like this decades ago. The Club Kings was discontinued in the 1980s according to Cuban Cigar Website. 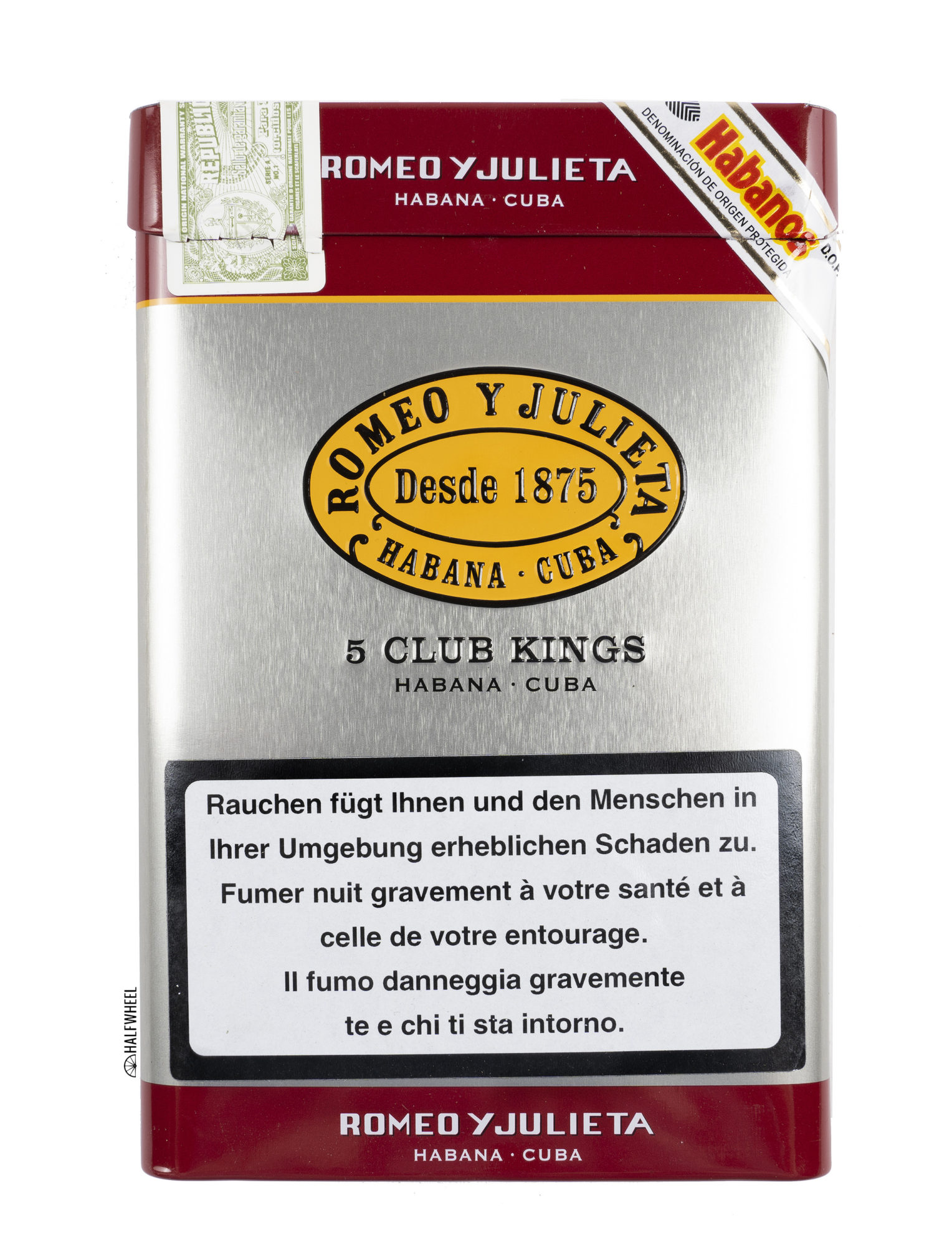 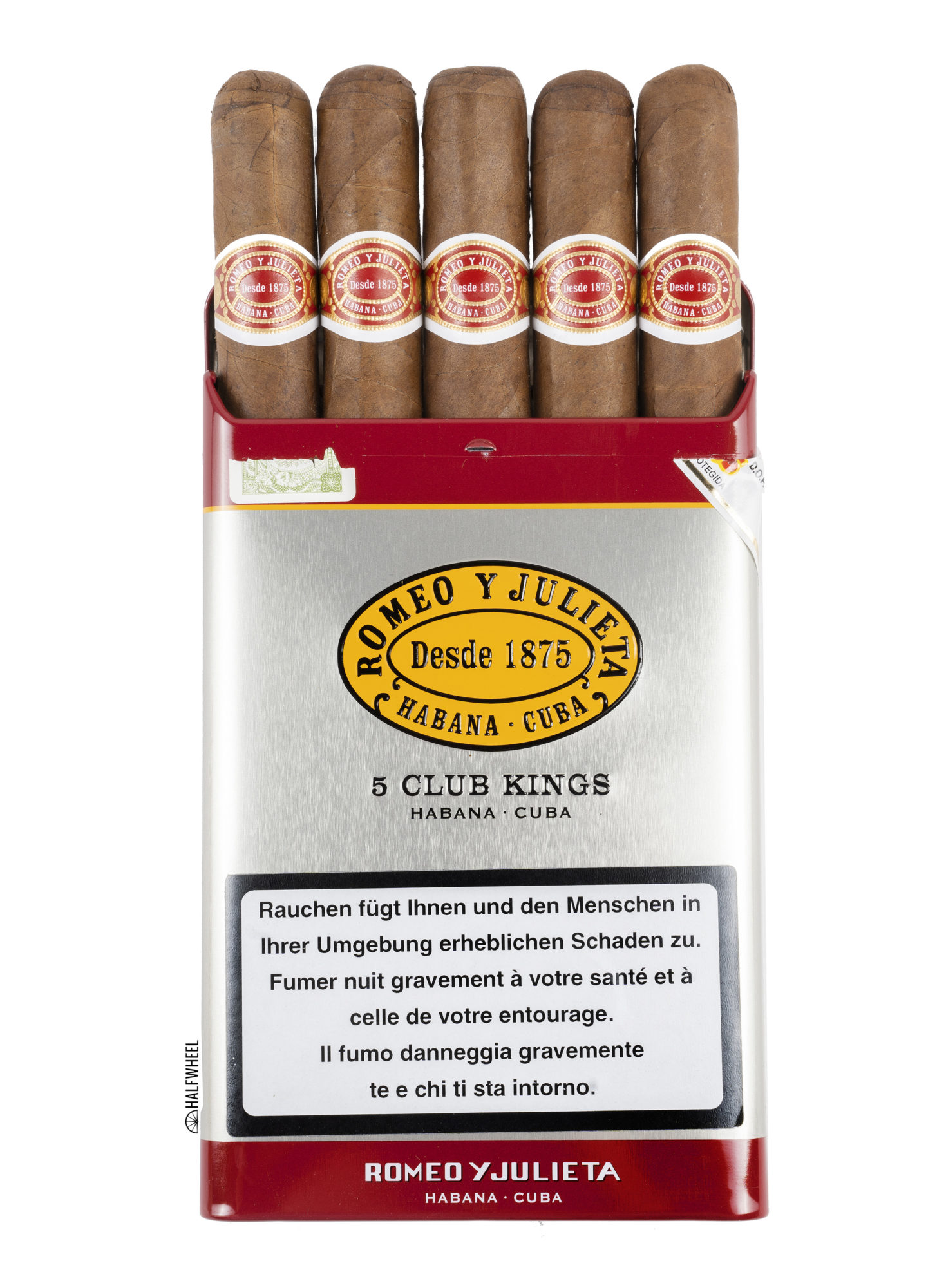 In February 2020—more than two years after the cigars were first announced—the Romeo y Julieta Club Kings was finally set for release. In Switzerland, the cigar was priced at 62.50 CHF ($64.20) per pack of five.

As of now, it does not appear the Partagás Capitols has been released. 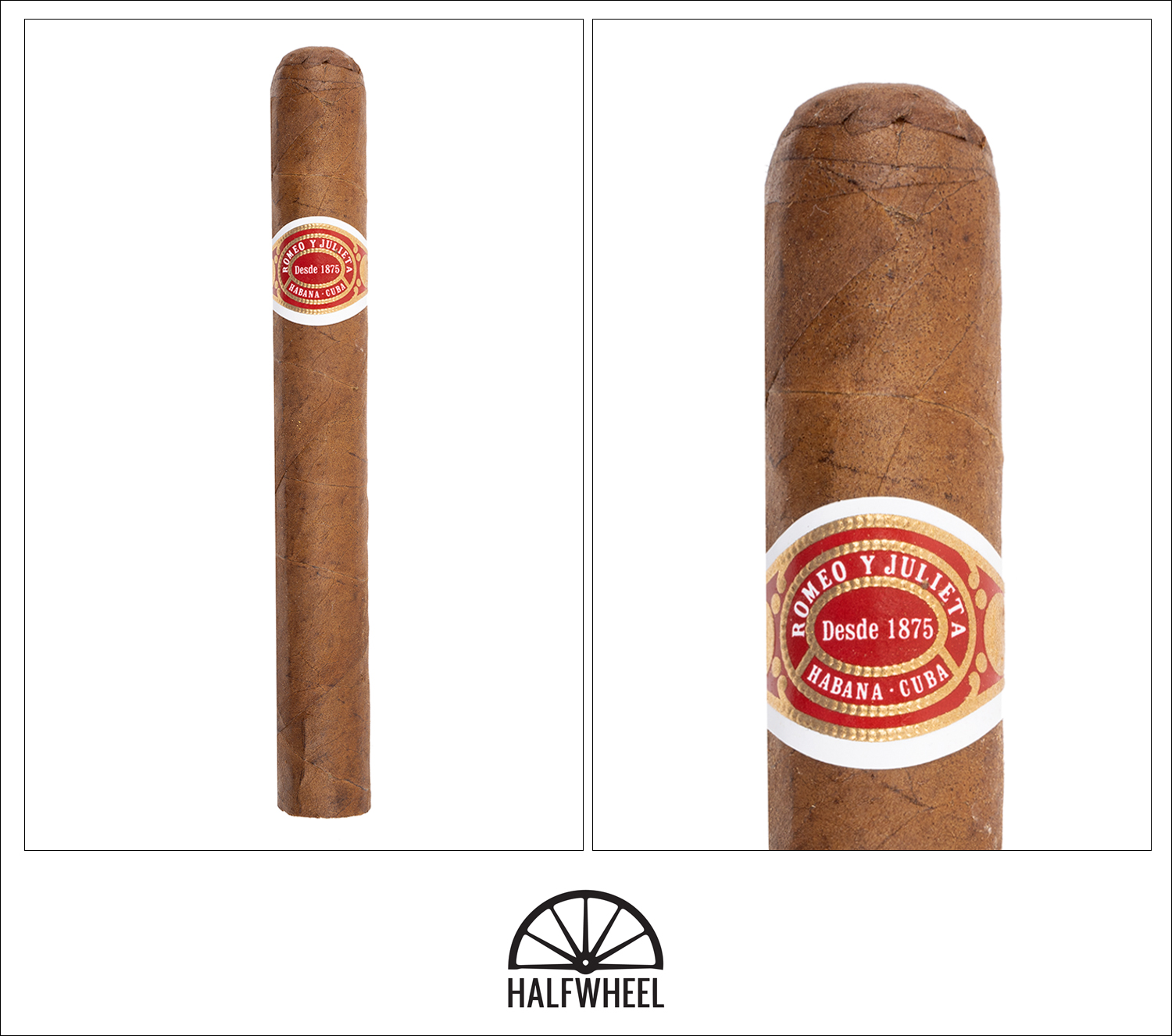 While the color of the wrapper is great, the overall quality of the wrapper isn’t great. It’s visibly rough, it’s rough to the touch, and squeezing the cigar doesn’t give me a ton of confidence given how tight the cigar feels. Despite the fact that the cigars were stored in a sealed tin, I really can’t pick up much in the way of aroma from the wrapper. There’s some cedar and sweet bread flavors, but it’s mild at best. The foot is stronger, around medium, with just raisins. Not surprisingly, the cold draw is quite tight and features lots of oatmeal over somewhat of a rice flavor, around medium.

Things begin very Cuban. Flavor-wise, my notes actually say, “Classic Cuban” because of the cedar and oak with just a bit of underlying sweetness. My notes also indicate that the draw is “super tight,” which some cynics would say is also very authentic. The flavor develops into a profile that has a mixture of a french fry flavor and charred earth. It’s a bit acidic with hints of a sweet tomato flavor. Unfortunately, the flavors are too concentrated and sharp, which creates a bit of a harsh aggregate. Retrohales have nuts and a bourbon-like finish. The finish has lots of harshness at the back of the throat, some more of that french fry flavor along with some touches of white pepper. Flavor is full, body is medium-full and strength is medium. The draw is super tight, forcing me to smoke much quicker to keep the cigar from going out. 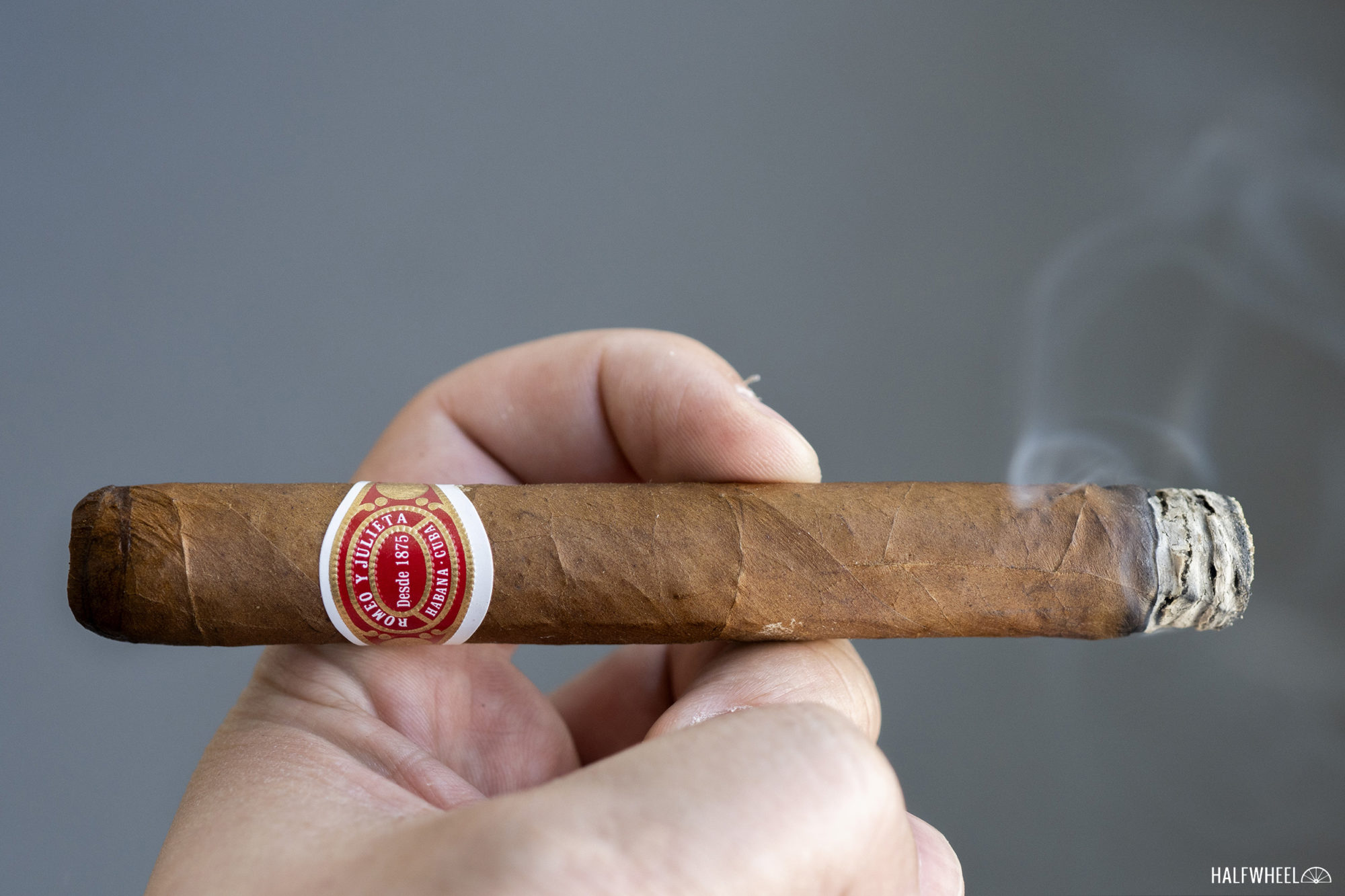 The second third of the Romeo y Julieta Club Kings gets a bit more sour. Fortunately, it only lasts for 10 minutes or so on each cigar. Unfortunately, it’s quite unpleasant. Once that clears up, the profile is left with some underlying sweetness, creaminess and light touches of citrus. Retrohales are pleasant with a lot of nuttiness, some lemongrass and hints of butter. The finish is a combination of nuttiness and cedar with the harshness remaining on the back of the throat. I think the harshness isn’t as strong as it once was, but it’s been sitting on my throat for 25 minutes and as such it’s the most noticeable flavor to me. Construction gets worse, the draw is still tight but now touch-ups are needed to keep things lit. Flavor is medium-full, body is medium-plus and strength is still medium. 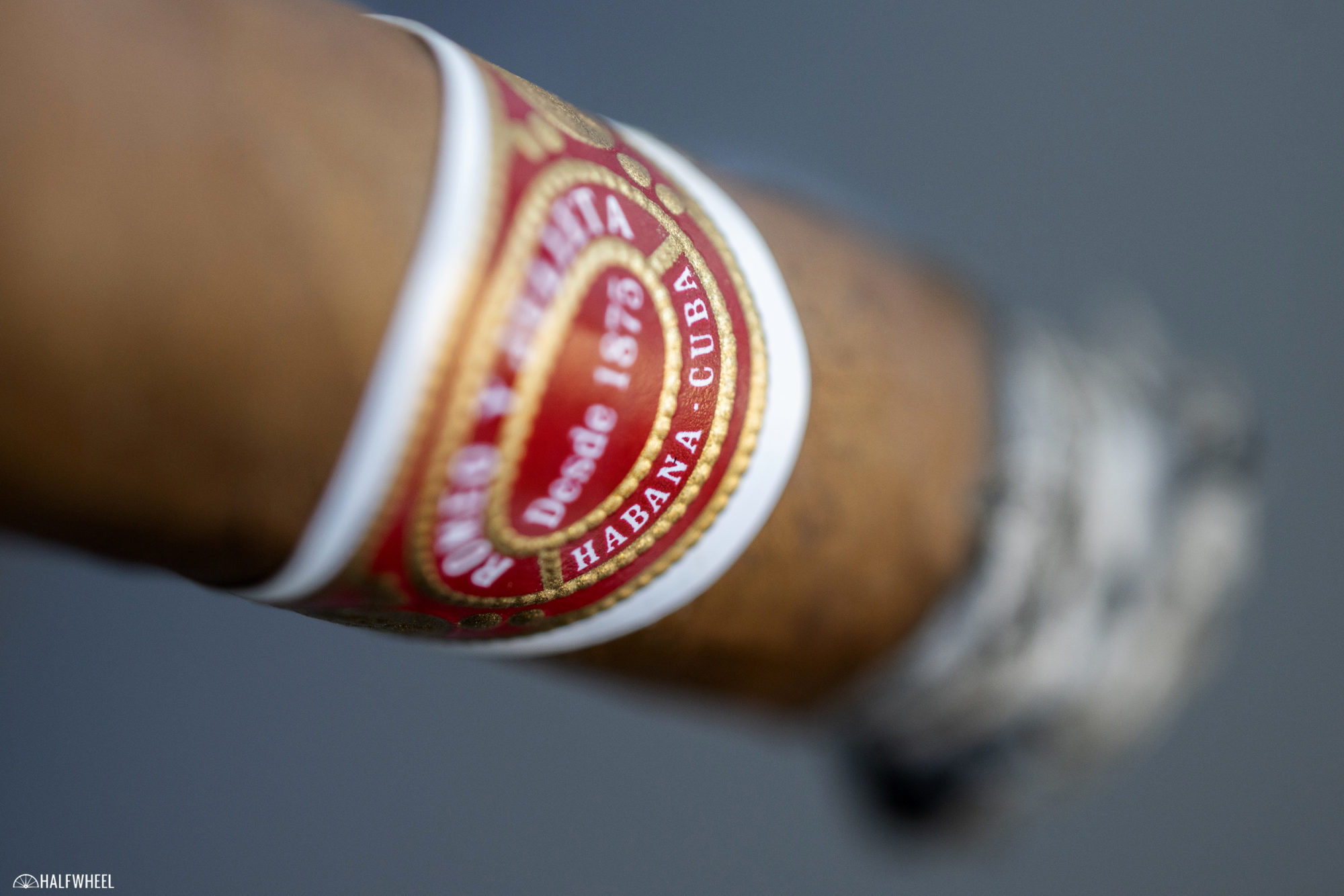 Fortunately, the harshness disappears for the most part in the final third. That allows the Club Kings to smooth out a bit with nuts and a touch of herbal flavor. Retrohales have nuttiness along with some red wine. The finish has a blast of white pepper, peanuts and a touch of saltiness. Flavor is medium-full, body is medium-full and strength is medium. Unfortunately, the construction continues its downward trend with touch-ups needed to help keep the smoke production going. The Romeo y Julieta Club Kings might be a good cigar, but these examples were not. At best, the draw was very tight, but even that seems generous. If this wasn’t a cigar that I was having to smoke for review, I wouldn’t have kept smoking any of the samples based on the draw. The flavor was better that the construction, but still not good and certainly not enough to make up for the construction. I think Cuba’s construction woes are oftentimes overinflated but cigars like this don’t help to try to change the narrative. Perhaps at some point the cigars will be rolled properly, perhaps not. For now, at least the packaging is great.