There are a lot of things I’d love to be able to do when it comes to the cigar industry and my knowledge of it. One of the main ones would be to travel back to different points in it to see just what the market was like, what people were smoking, what brands were around, and so on.

I bring that up because, at one point, the non-Cuban Romeo y Julieta brand was much smaller than it is today. It was a staple in a number of humidors, one of the go-tos for an earlier generation of cigar smokers who didn’t have nearly the variety of cigars that are on the market.

Of course, that has changed dramatically, and Romeo y Julieta, one of more than two dozen brands under the Altadis U.S.A. header, now has more offerings than many smaller brands and companies.

The latest installment under the Romeo y Julieta flag is an extension to an extension, so to speak, as the Romeo San Andrés by Romeo y Julieta joins the ROMEO by Romeo y Julieta subgroup, a collection of cigars that first debuted in 2012 as a stronger option to the standard portfolio. It also builds on a pair of other recent developments for Altadis U.S.A., the hiring of Rafael Nodal as head of product capability for its parent, Tabacalera USA, as well as the increasing relationship with Abdel Fernández.

Nodal and Fernández partnered together on the creation of the cigar, with the latter producing it at his factory in Estelí, Nicaragua. While the Mexican San Andrés wrapper leaf gets the headline, the binder comes from Nicaragua, as does a portion of the filler, which gets paired with Dominican tobaccos.

It was released in March in four sizes:

As noted at its release, this is the fourth widely released project that Abdel Fernández and Altadis U.S.A. have partnered on, joining the Gispert Intenso, Monte by Montecristo AJ Fernandez, and the H. Upmann by AJ Fernandez. Fernández has also produced cigars for Altadis U.S.A.’s Montecristo and Romeo y Julieta brands, though those went to the distributor Santa Clara, Inc., which handles catalog and internet sales.

Additionally, this is the third time that a Romeo y Julieta release has been produced by a factory other than Altadis’ Tabacalera de García; Nodal blended the ROMEO by Romeo y Julieta Aging Room Small Batch F25, which is made at Tabacalera Palma, while the Romeo 505 Nicaragua was made by Plasencia Cigars S.A. 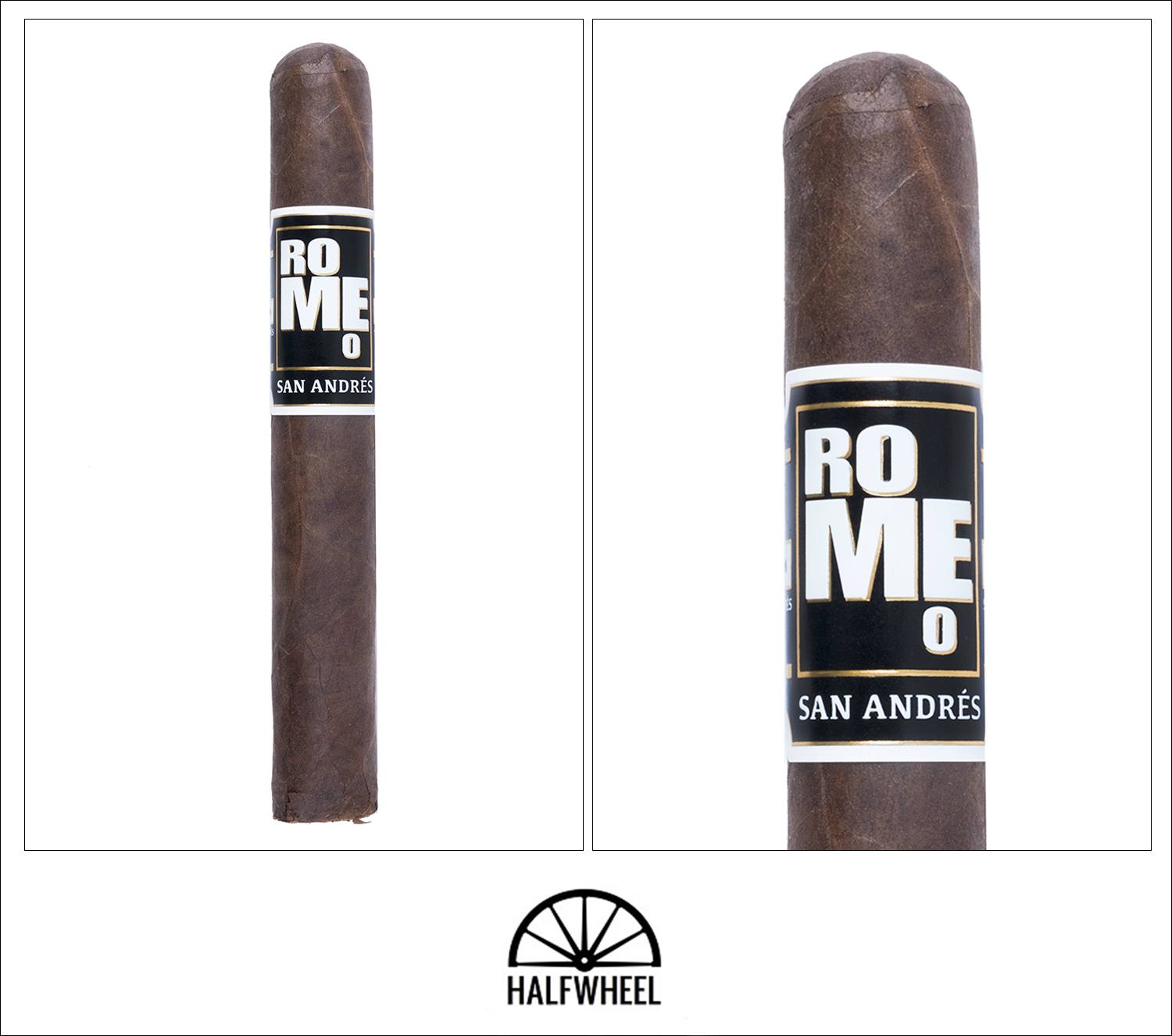 Whoever was tasked with matching the band to the wrapper gets a gold star, as the two play well off each other while staying true to the ROMEO aesthetic that was created several years ago. The black, gold and white colors in the band complement the dark, earthy brown of the leaf both on their own and collectively, making for a solid presentation. The leaf itself is dry and offers a fine grit texture to the fingertips, while veins are generally small, toothiness is minimal and the color is quite even. It is a very firmly rolled cigar with little give, a well-applied cap and invisible seams. The foot of the ROMEO has a first smell that is very reminiscent of a lumberyard as it is woody but with a sawdust softness and some dark chocolate aromatics. Each sample falls between firm and rock hard. I’m also struck by the firmness of the first sample’s cap, as it makes me cautious that an aggressive cut my split the wrapper or do other damage. When I finally create a decent opening, I’m treated to a fairly firm draw that offers a subtle chocolate chip note on top of some earthiness and just a bit of pepper.

The first sample lights quickly but it comes at the expense of a crack in the wrapper that begins to not only develop, but encourage some of the wrapper to pucker up along a seam line. As for the flavor, it’s a solid medium-plus with a good bit of earthiness at the base, some pepper that hits several parts of the mouth. My first retrohale is surprisingly tame and compact in terms of the impact it has in the nostrils, offering just a bit of white pepper tingle before things return to normal. The Romeo San Andrés by Romeo y Julieta Toro is certainly starting to develop into what I would call a San Andrés-forward cigar, though I do find it lacking a bit of the lushness and richness that I’ve found in other cigars using the same wrapper and/or marketing. While the flavors are plenty enjoyable, they don’t quite sing, at least yet. The ash builds up quite nicely into a dense clump of light gray memories, which I eventually. 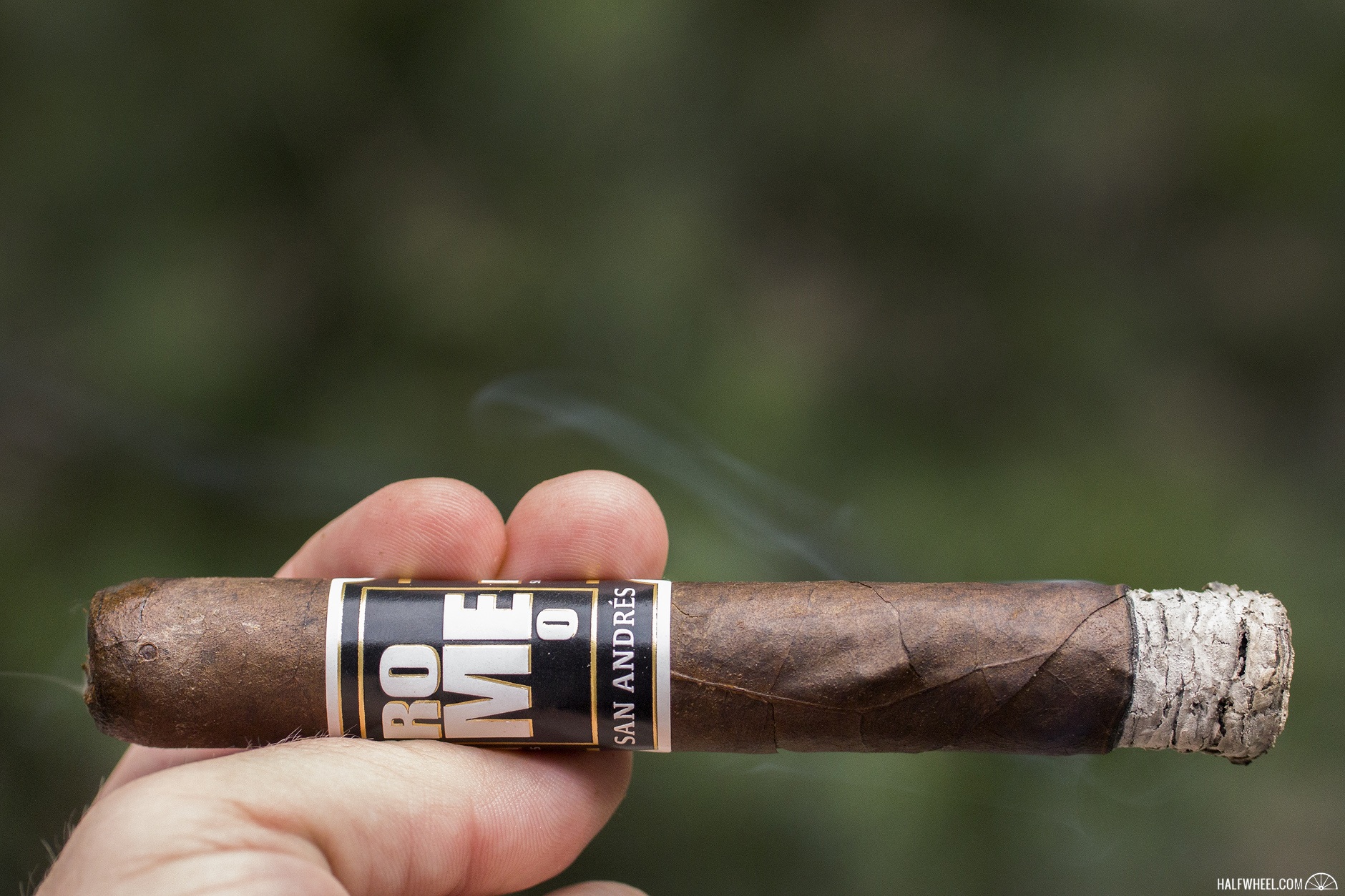 There’s a bit more strength to be found at the start of the second third; it’s a small step up, but the first retrohale confirms what I was thinking by way of an increased black pepper, the earth note becoming a bit more concentrated, as well as some thick chocolate syrup now appearing on the finish, which begins to address the lack of lushness I noted in the first third. One of the three samples doesn’t quite follow the path laid by the other two, instead it gets a bit sharper and more metallic on the palate, and in turn generating some harshness in the mouth. It appears that the lushness and depth experienced earlier is a thing of the past, as the final puffs of the second third see the flavor dry out, and in turn dry my mouth out, while returning to its earthy core with an accents of pepper, and just a bit of chocolate left in the aroma. I’m a bit hesitant to peg it at a true full-bodied cigar, though that just be my own meter speaking, as I certainly think this would be too much for devotees to the milder end of the spectrum.

Continuing on the final puffs of the second third, the final third of the Romeo San Andrés by Romeo y Julieta Toro stays full in flavor if somewhat lacking in vibrancy, though when the pepper is at its fullest the sentiment isn’t quite as strong. Through the nose, the pepper has taken on an interesting char note similar to that of burnt steak ends, and while that’s something I’m a fan of, it’s not quite as good through the nose here. The third sample can’t seem to get itself back on course either; having strayed earlier in the cigar, it’s still got a harsh metallic twinge to it that is not sitting well on my palate. That gets rectified with about two inches to go as the pepper starts to stand out and there’s a bit of rocky earth emerging that gets a bit more pointed on the tongue. 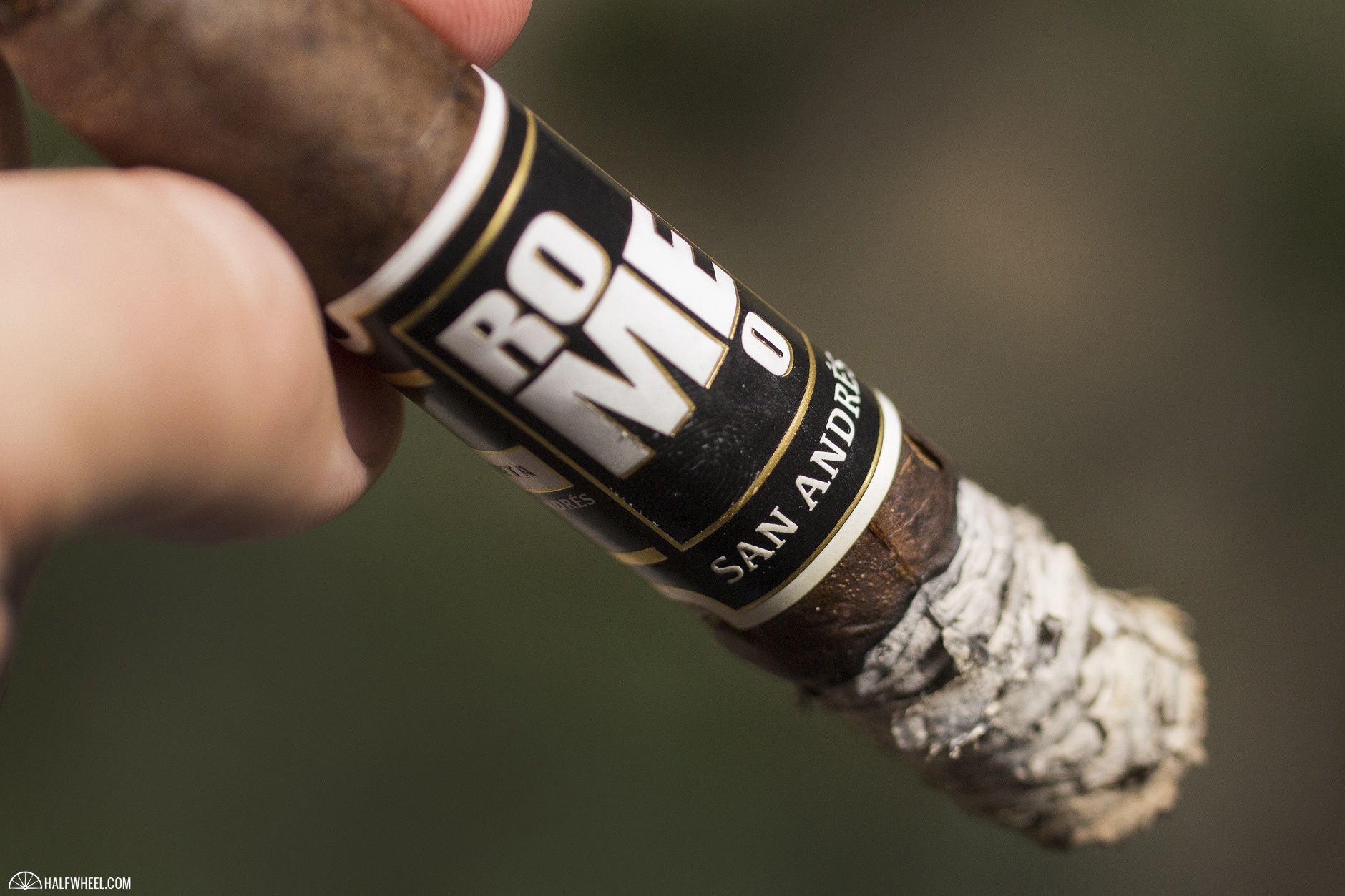 There’s some nicotine strength to be found here as well, and in the final inch the smoke begins to heat up and further alters the experience, though it remains quite palate-friendly, assuming you’re not wary of fuller-bodied cigars and willing to be very patient with your puffs. That’s also a needed strategy as the smoke has become eye-stinging, so consider being downwind as well. The cigar finishes without any technical problems other than a draw that could be considered a tick tight, producing plenty of smoke and maintaining a sharp, even burn line. 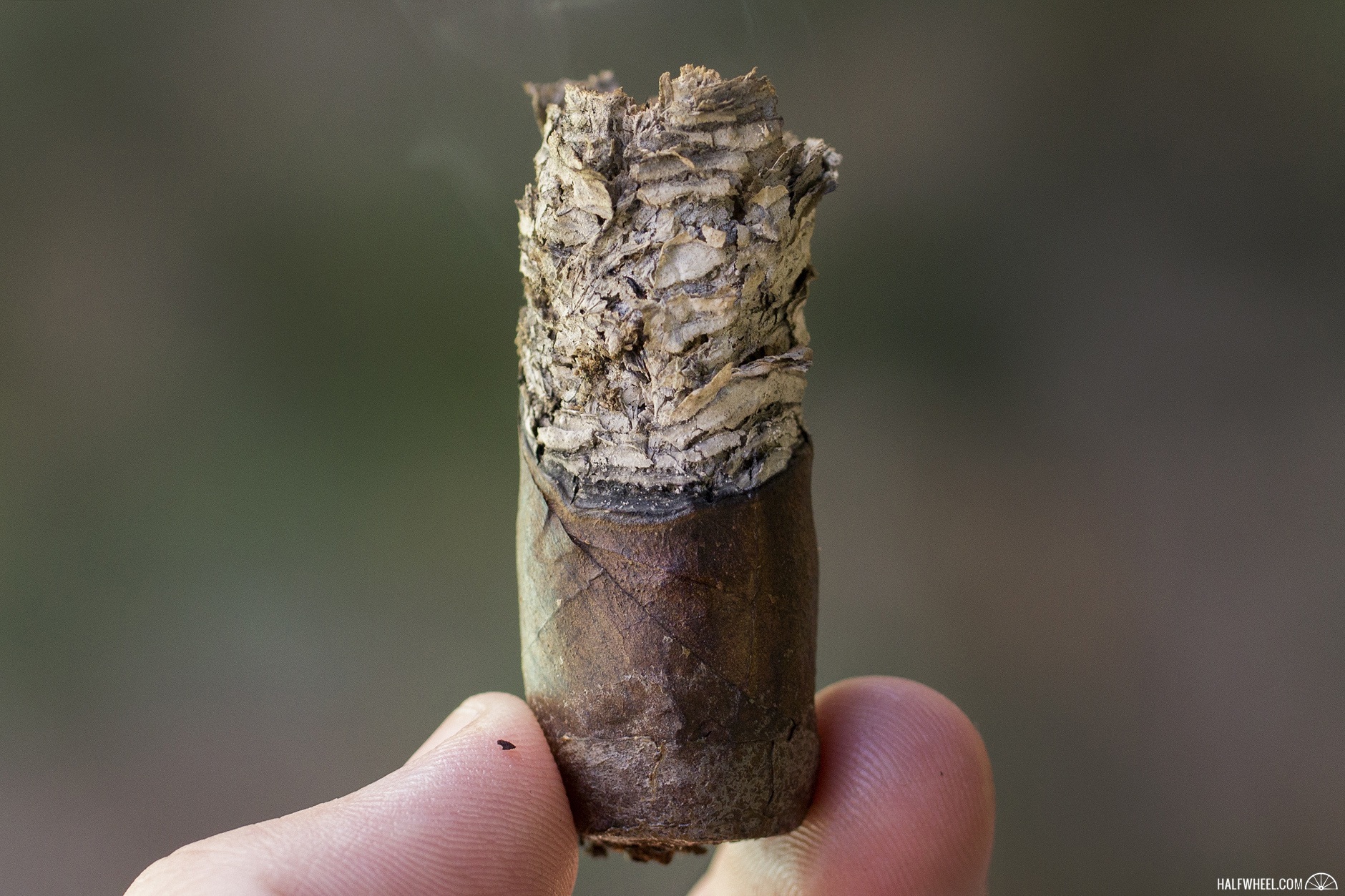 I've said it before and I'll say it again, you had me at San Andrés. It has become one of my favored leaves for a number of reasons, and in two of the three samples, the Romeo San Andrés by Romeo y Julieta Toro does a commendable job showing off some of its better qualities. It's still not the top of the heap, and the third sample left quite a bit to be desired thanks to a second half that was rough and metallic, including leaving a stinging sensation on my tongue as I write this. I'm certainly intrigued by this blend as putting the brand in the hands of Nodal and Fernández seems to have been a smart move, and hopefully a bit more time will be favorable to this. If you're a fan of San Andrés tobacco, I certainly think this is worth giving a shot as it doesn't do anything to diminish the growing reputation of the varietal.