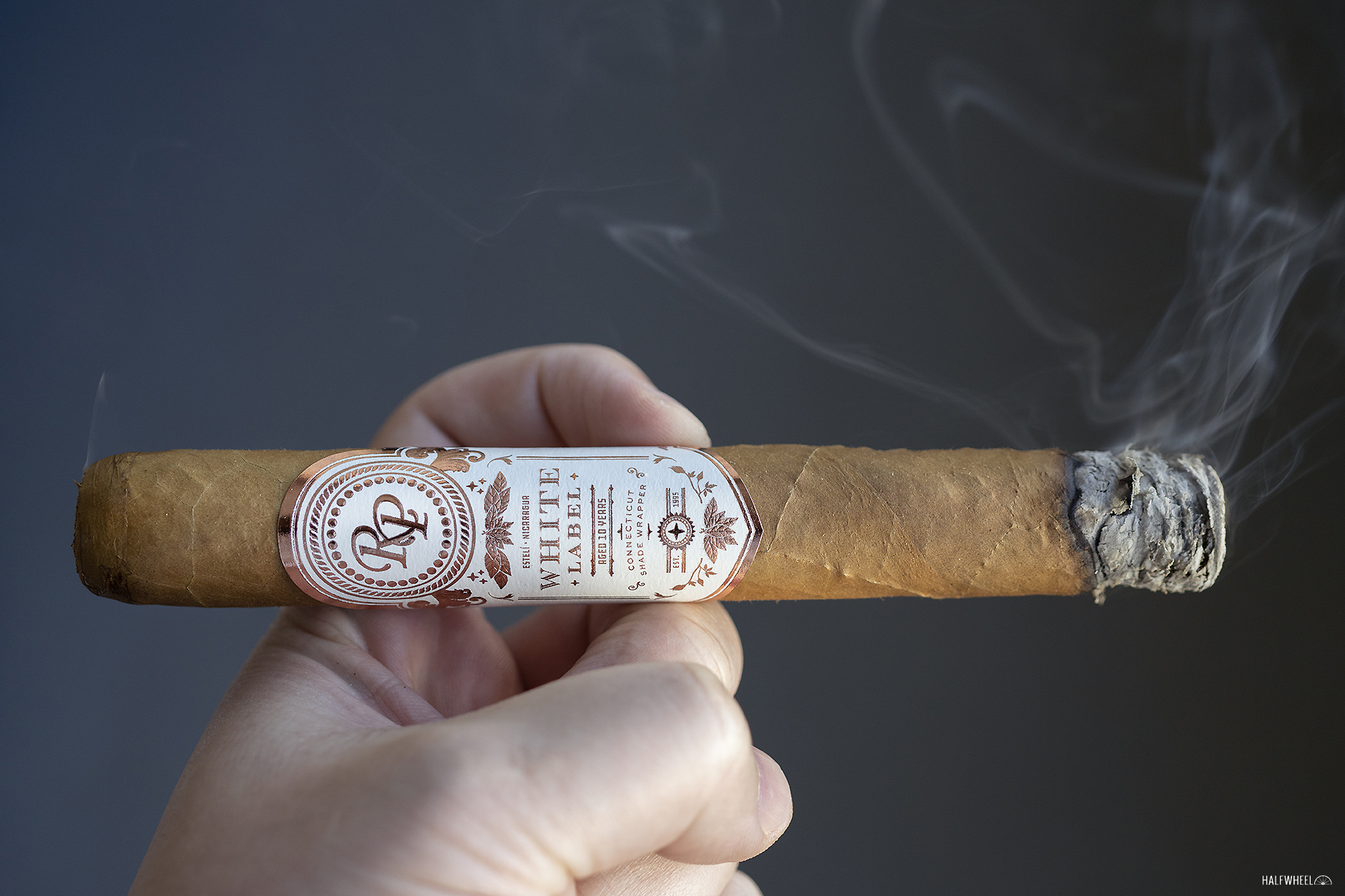 Few companies approach new products launched at the annual PCA Convention & Trade Show with as predictable of a manner as Rocky Patel Premium Cigars, Inc. Nearly without fail, the company’s new offerings are: three new lines, less than a handful of new sizes for existing lines, and new accessories.

While the latter parts change slightly year-to-year, the three new lines per trade show has been remarkably consistent. That’s why—leading up to the trade show—I was a bit surprised when the company only announced two new cigars. But the past is prologue and it turns out there was a third line.

The reason for not announcing the cigar was, apparently, related to some trademark concerns and with seemingly good reasons. Rocky Patel, the company, wanted to remain quiet about a trademark it has filed for regarding the name “White Label.” On April 20, 2021, that trademark was published for opposition, seemingly clearing the way for it to introduce a cigar with a name that probably irked a number of companies.

As for the cigar, the Rocky Patel White Label seems targeted at going after two humidor staples: Montecristo and Davidoff. It’s a $20ish line that uses a Connecticut shade wrapper over a Nicaraguan binder and fillers from the Jamastran Valley in Honduras, Nicaragua and at least one undisclosed tobacco. The company says the tobaccos used for this release have been aged for a decade. 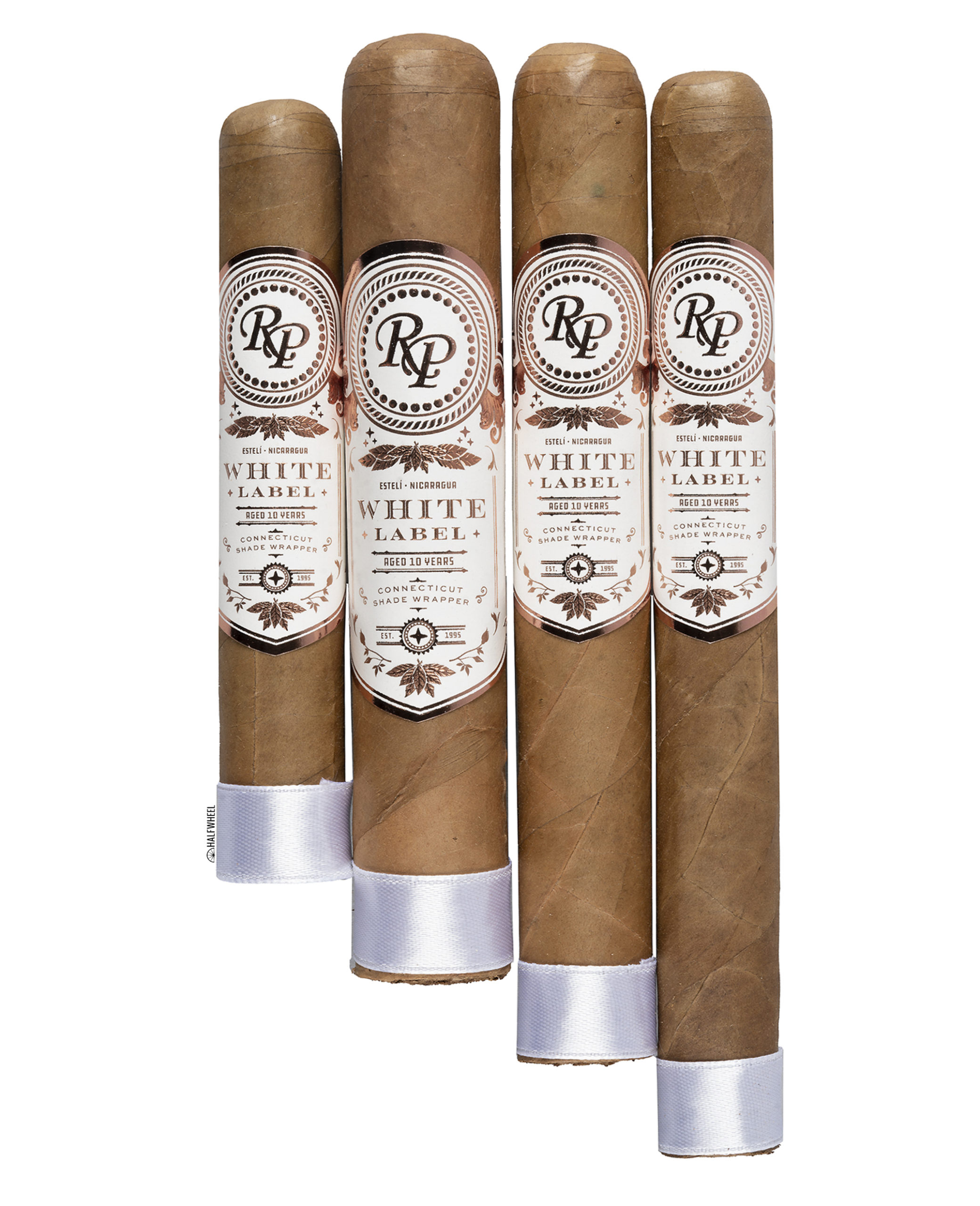 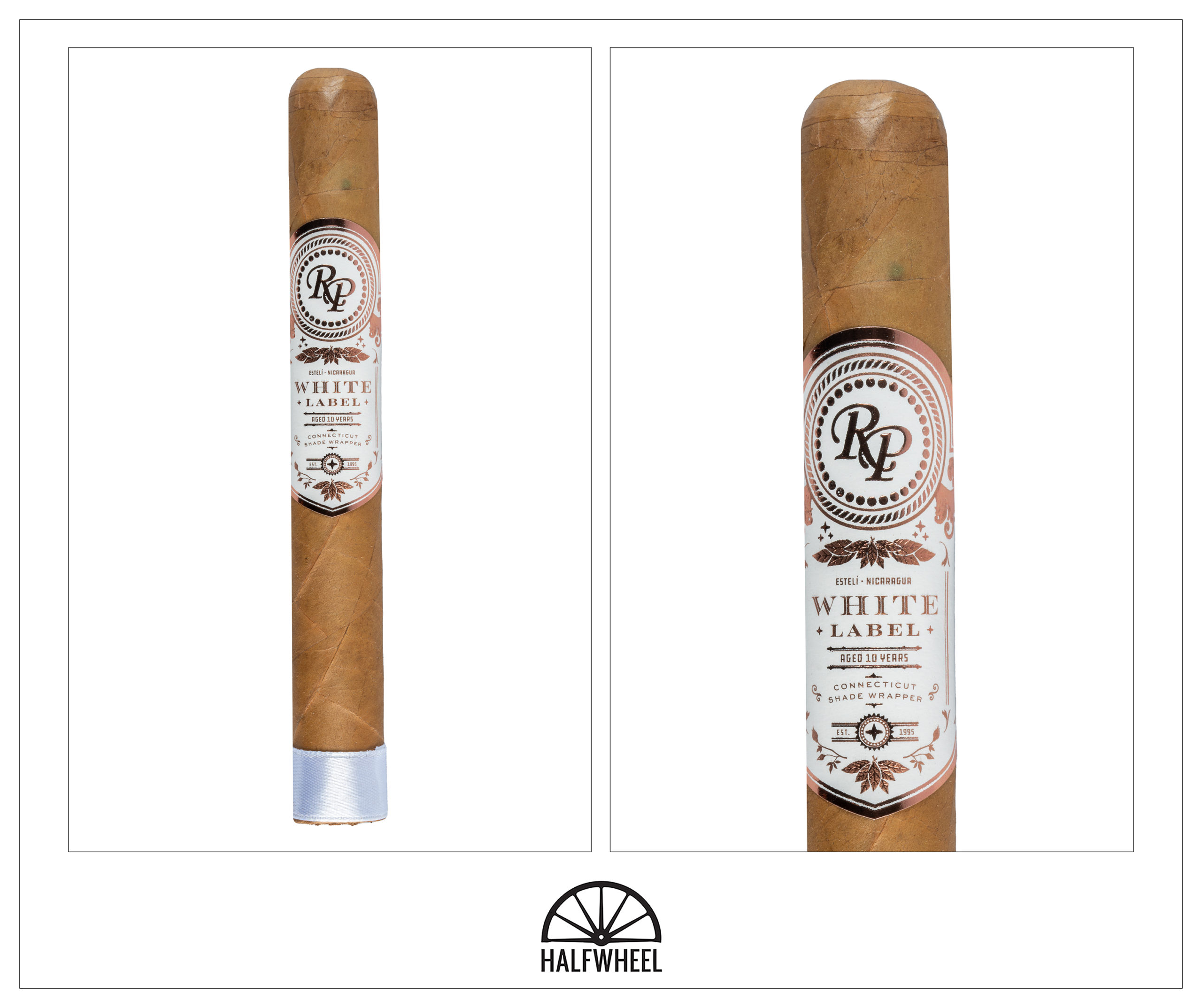 This is a premium cigar at a premium price and I’d say it generally looks the part. The tanned mustard color is rather consistent in color, though there are a fair amount of veins that are easy to spot. I’m impressed with the work around the head, where there’s an obvious triple cap that’s applied well on each cigar. While rose gold became quite popular in the last decade, it hasn’t really caught on for the cigar industry like it did for Apple, but it’s nice to see it here. The bands have a surprising amount of information on them: the wrapper used, where the cigar is made, the length of tobacco aging, and the name of the cigar. The aroma from the wrapper is medium-plus with peanuts, barnyard and a hint of a smell that reminds me of the Lexol brand leather cleaner. The foot is strong with nuttiness and chocolate syrup leading barnyard and a pepper aroma that varies between white and red pepper. I don’t think there’s a clear leading flavor from the cold draw, but it’s a great mixture of pasta, peanuts, berries, acorns, vanilla, meatiness and a touch of chocolate.

Once lit, there’s an enjoyable combination of earthiness and nuttiness over some toastiness, an underlying sweetness, and a burnt pepper sensation that reminds me of the crust of a well-seared and well-seasoned steak. Things change soon enough and the first third settles on a combination of cake batter, nuttiness and creaminess. Those three flavors rotate in and out of the top spot depending on the puff, but they also pretty much overwhelm whatever other flavors are there. The Rocky Patel White Label Toro’s finish has nuttiness and lemon leading leather, creaminess, herbal flavors and some pork broth sensation that reminds me of the end of a bowl of ramen. Retrohales have cedar, meatiness, citrus—grapefruit on two cigars and orange on the other—and then creaminess and nuttiness as the finish take over. As the retrohale’s finish develops, the nuttiness and the creaminess don’t give up, but there’s some added grapefruit and a metallic-like burning sensation. Flavor is full on two cigars though medium-full on another, body is medium-full and strength is medium. Construction is excellent in the first third.

Given the size of the band, it needs to be removed before the halfway mark and it causes some damage each time I need to take it off. Flavor-wise, the nuttiness remains, though it’s now joined by earthiness, corn chips, meatiness and white pepper. Creaminess remains depending on the cigar, but it’s no longer a leading flavor or really close to being a leading flavor. The finish has nuttiness and sourdough bread over leather, white pepper, meatiness and some interesting tartness on the sides of my tongue, something that reminds me of certain sour beers, particularly because of how it sits solely on the sides of the tongue. The sourdough bread flavor picks up quite a bit during the retrohale, beating out nuttiness and black pepper. After the smoke leaves my nostrils, I still find quite a bit of sourdough bread flavors, but now over creaminess, a grapefruit sweetness and some herbal flavors. Flavor is full, body is medium-full and strength is medium-plus. One cigar avoids a touch-up, another needs a touch-up, and another requires two different uses of the lighter, including a full relight. 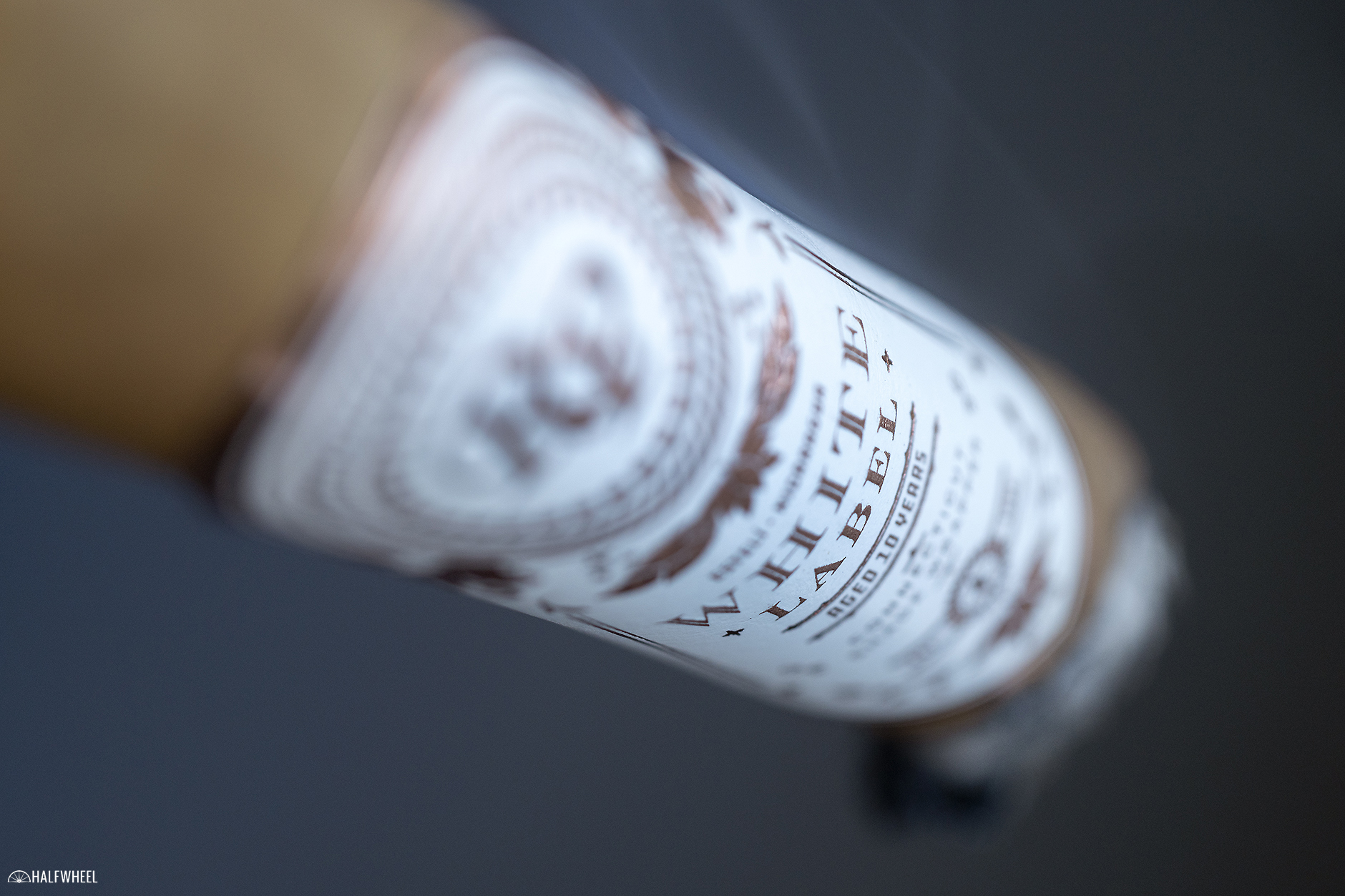 While the nuttiness was pretty vibrant during the first and second thirds of the Rocky Patel White Label, it gets a lot richer in the final third. Thanks to the return of some creaminess, it also takes on a peanut butter-like flavor. Additionally, there’s a minor amount of both herbal flavors and a touch of that metallic harshness. Both of them are mild and restrained, so they serve as accents instead of overwhelming the rest of the profile. The finish has a mineral water-like flavor in the transition before black pepper and oak emerge, though creaminess is the longest-lasting flavor, easily still detectable after more than 30 seconds. Retrohales have some floral flavors, orange, earthiness, black pepper and mineral flavors. One cigar has a bit of a burning rubber sensation, though it’s quite mild and not present on the other two cigars. Afterwards, I’m able to pick up a very familiar flavor that is remarkably like orange bitters along with earthiness, creaminess and leather. During the final third, flavor is full, body is medium-full and strength is medium. After the burn corrections in the second third, the final third does quite well, avoiding any need for corrections until I’m ready to stop smoking the cigar. 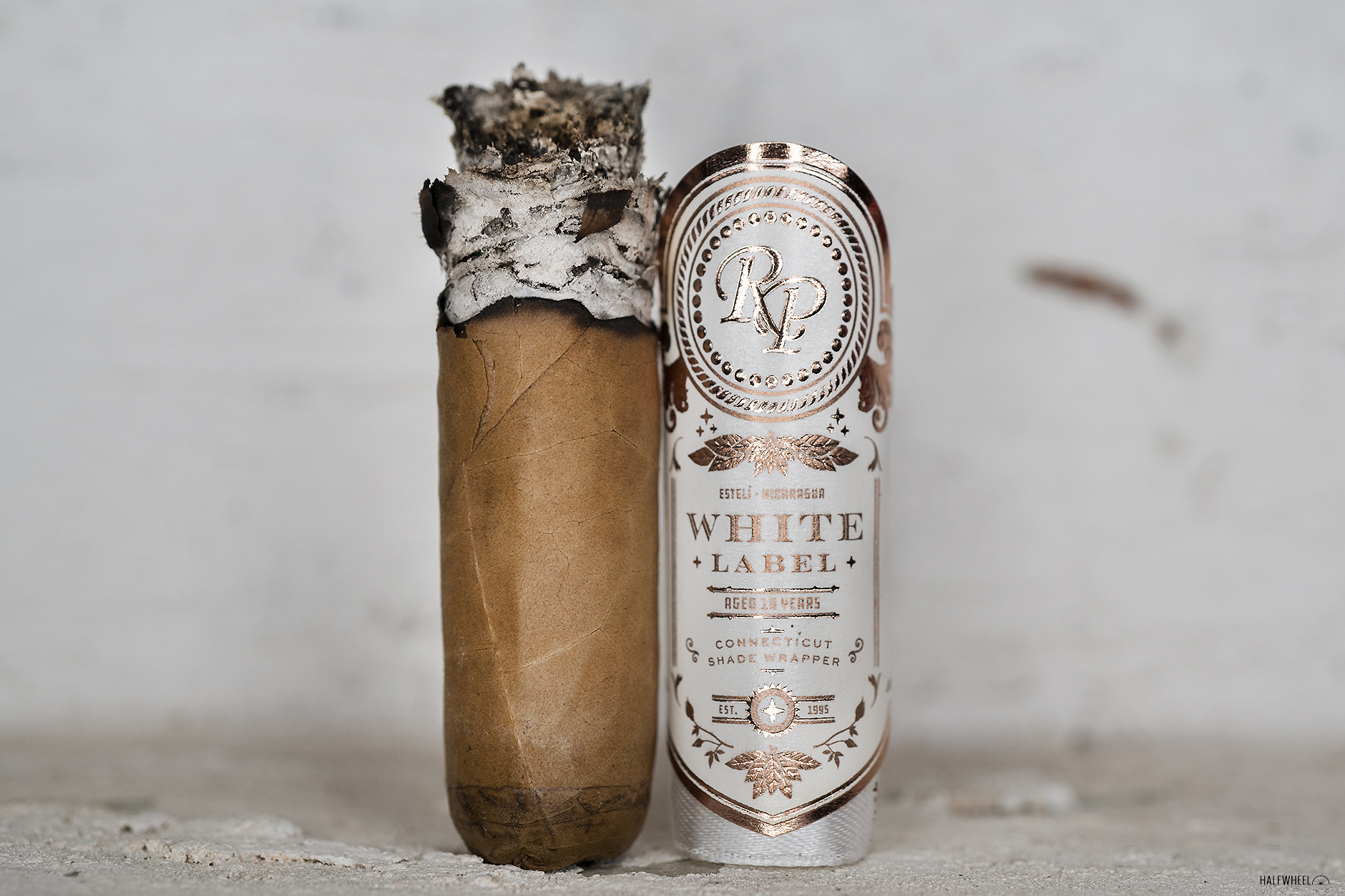 When I first started writing about cigars, Rocky Patel was not a company with a great reputation amongst the online cigar media or really, internet cigar culture. That ran counter to both the accolades the company received in cigar magazines, the volume of sales the company produced, and probably the truth. I still remember the first Rocky Patel cigar I smoked that really changed my mind to this fact—the original Nording—and then the first cigar that wowed me in a way few cigars do: the Zen by Nish Patel, back when the cigar still had that name. Since then, I’ve found plenty to like in Rocky Patel’s large portfolio and this White Label is certainly amongst the company’s very best. My hopes are that people are willing to give this cigar and its notable price point a chance because it’s more than worth your time, and that the company can keep the cigar consistent over time. If it can do the latter, this is not only one of the very best cigars from Rocky Patel, but also one of the best new cigars from last year.