At the 2017 IPCPR Convention & Trade Show, Rocky Patel Cigars showed off a cigar that featured two firsts for the company.

That cigar is Vintage 2006 San Andreas, and it is not only the first Vintage blend to incorporate a Mexican San Andrés wrapper, but is also the first blend under the Vintage brand that is being produced outside of Honduras.

The name of this particular release is a bit odd, as San Andreas is actually a location in California, whereas San Andrés, where the wrapper used on the cigar comes from, is located in southern Mexico.

“The Vintage 2006 will be the perfect companion brand to the Vintage Series,” said Patel in a press release. “It may be the youngest among the siblings, but it delivers with robust flavor and power.” 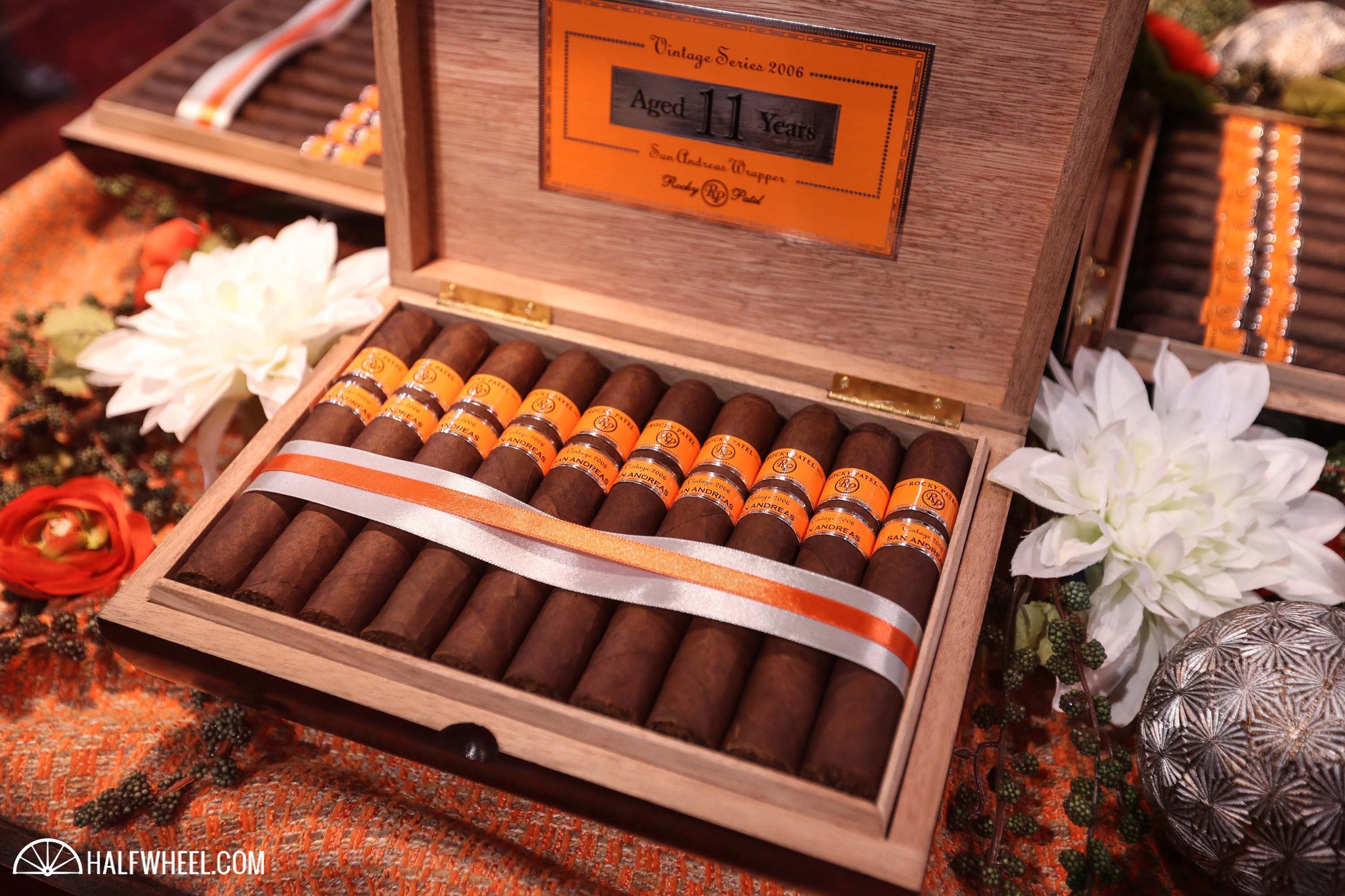 The four vitola line that is covered in an 11-year-old Mexican San Andrés wrapper covering a Connecticut broadleaf binder and Nicaraguan tobacco in the filler. The regular production cigars are being rolled at the company’s Tabacalera Villa Cuba S.A. (TAVICUSA) factory in Estelí, Nicaragua and shipped to retailers in August packaged in 20-count boxes. 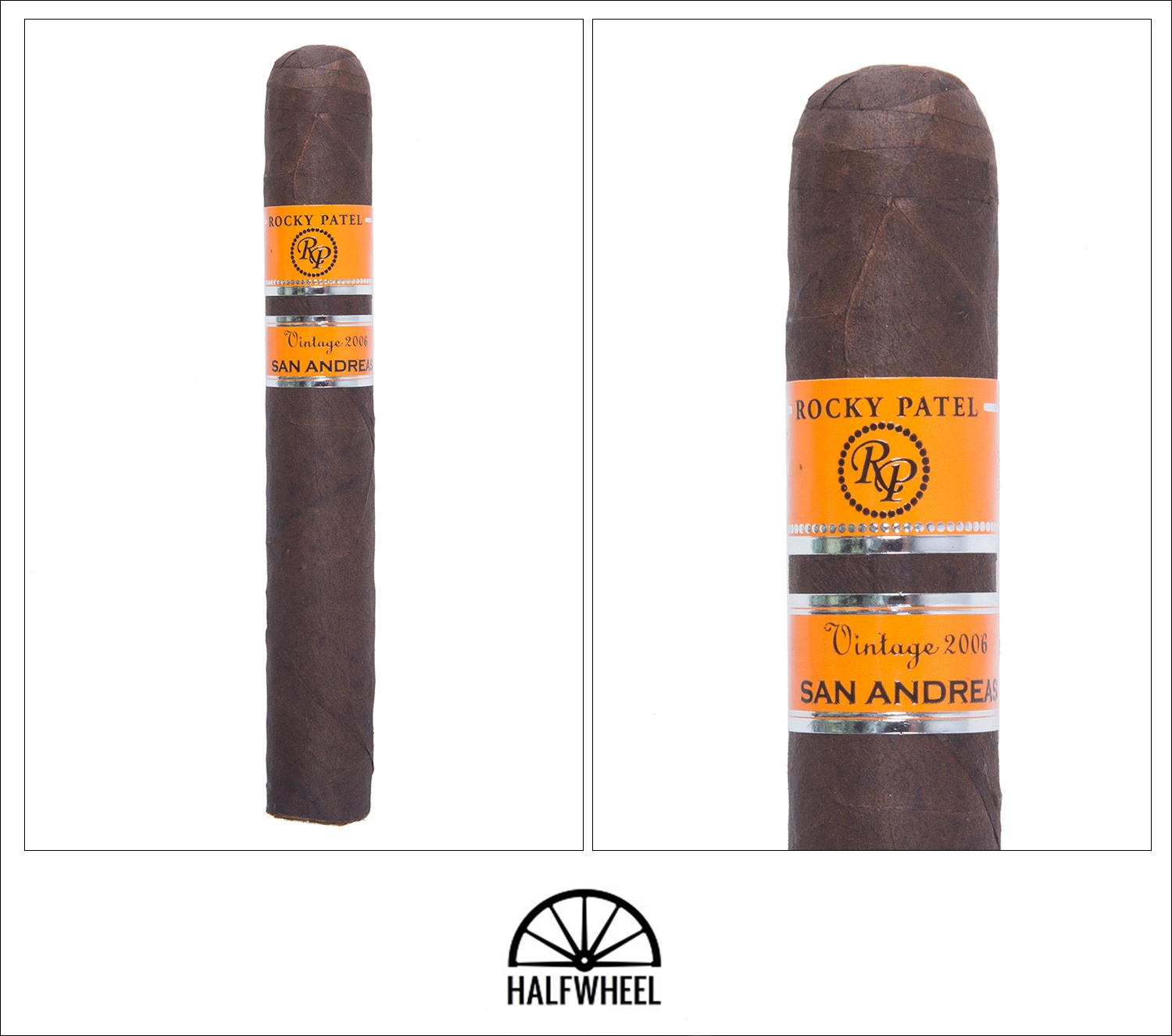 The first thing to jump out at you when you see the Rocky Patel Vintage 2006 San Andreas Robusto are the pumpkin orange bands, followed closely by the espresso brown wrapper that is extremely smooth to the touch. There is a touch of oil present as well as a couple of prominent veins running up and down the length. Aroma from the wrapper is a combination of massive dark chocolate, manure, creamy oak, barnyard and peanuts, while the cold draw brings flavors of the same strong dark chocolate, creamy oak, leather, black pepper and a touch of vanilla sweetness.

Immediately after lighting the foot, the first third of the Rocky Patel Vintage 2006 San Andreas starts off noticeably sweet on the palate, featuring the same dark and bitter chocolate from the cold draw as the dominant note, interspersed with other flavors of creamy oak, leather, earth and hay. In addition, there is a noticeable amount of pepper on the finish, but virtually nothing on the retrohale, and I am picking up some distinct raisin sweetness. Both the burn and draw are excellent so far, with neither giving me even a hint of a problem, and the smoke production is copious off of the foot. The overall strength starts out firmly between the mild and medium ranges, failing to hit the medium mark by the time the first third comes to an end. 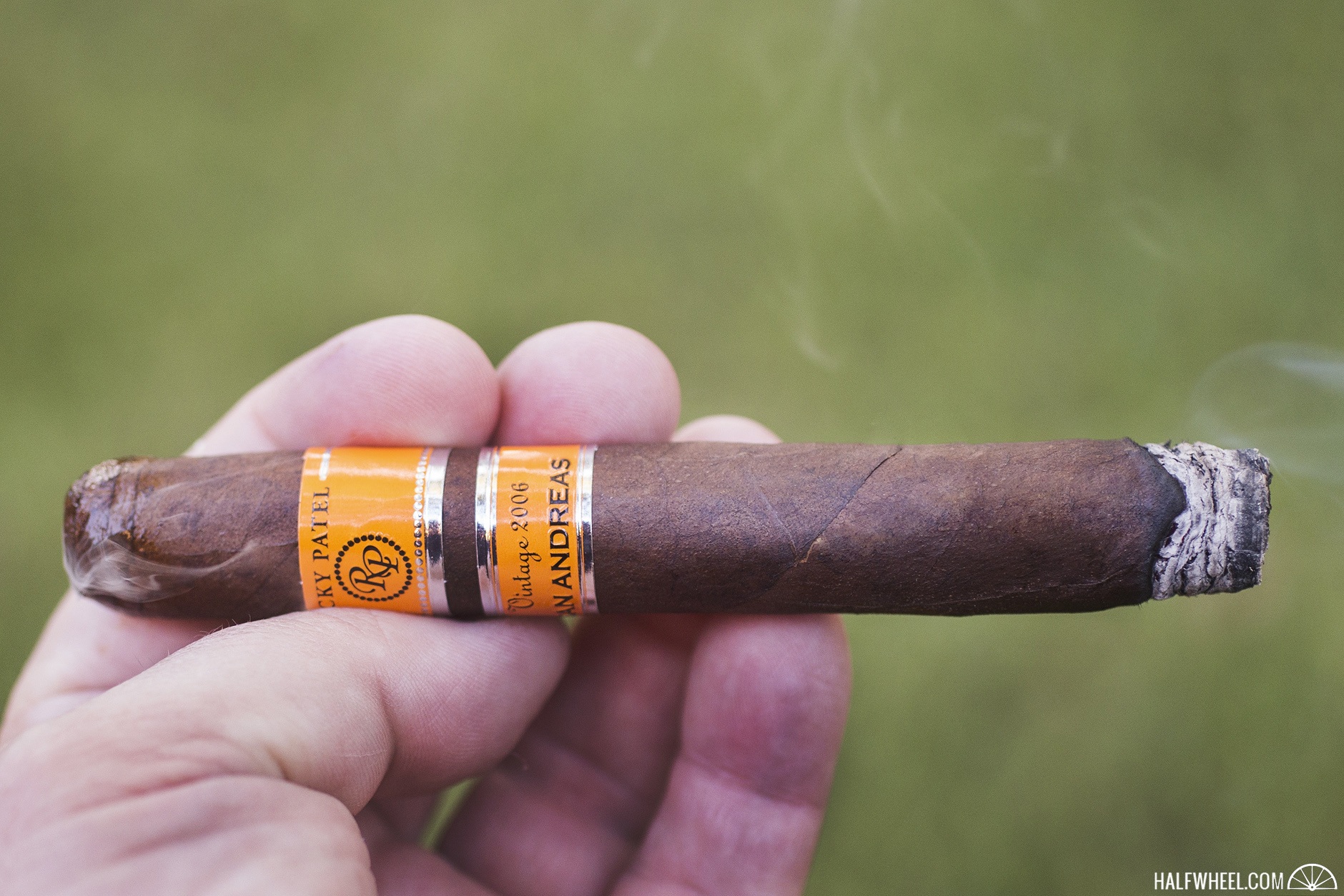 Coming into the second third of the Vintage 2006 San Andreas, the dark chocolate note is still quite dominant, although there are other notes noticeable that are easily strong enough to make an impact on the profile, including espresso beans, creamy oak, anise, hay, leather and a touch of floral. In addition, both the raisin sweetness on the retrohale and black pepper on the finish continue to make a positive impact. Construction-wise, the draw continues to impress, and while the burn has started to waver a bit, it is not close to bad enough to need touching up. The smoke production remains quite high, and while the overall strength does come close to the medium mark by the time the second third ends, it still does not quite make it over the line. 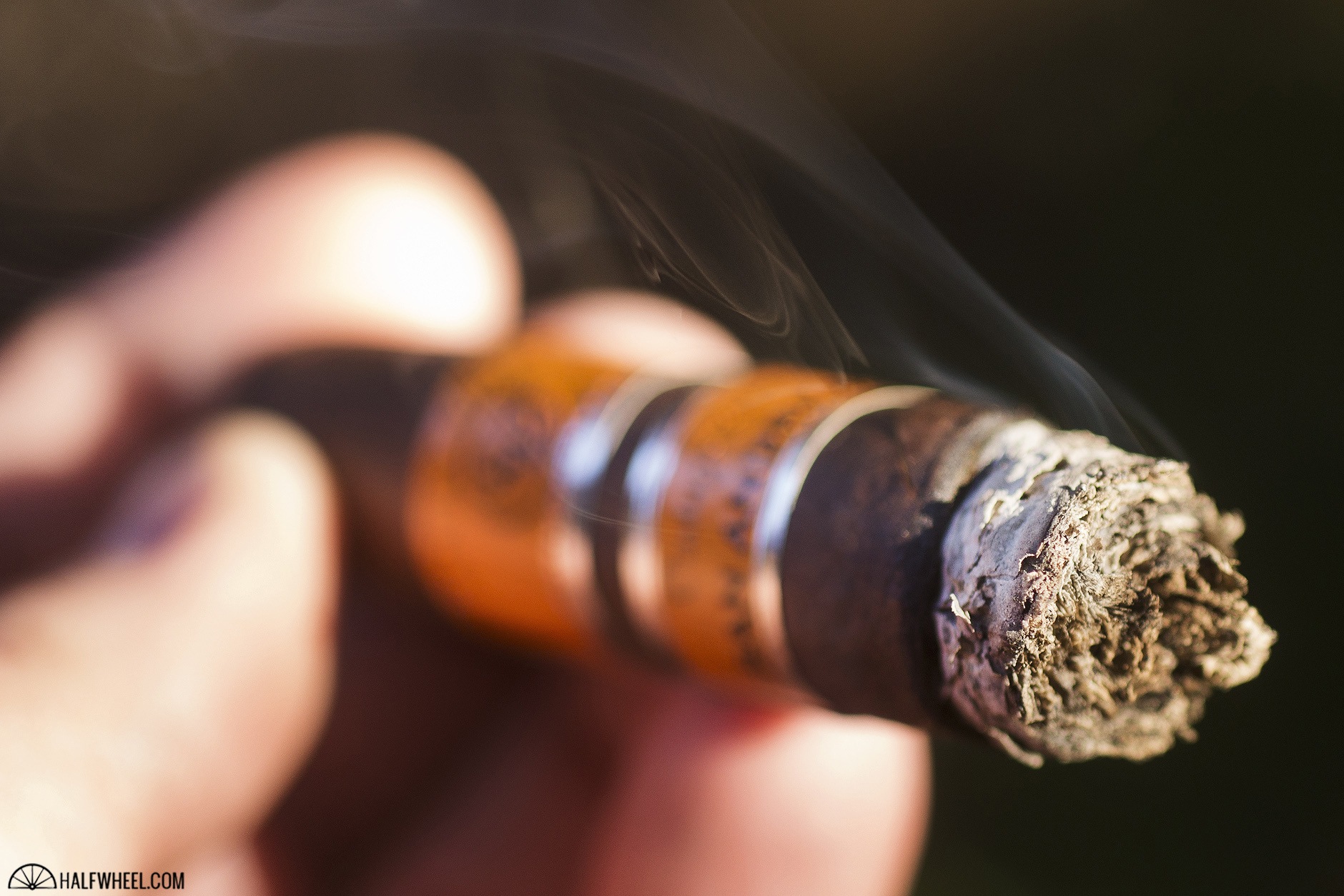 The raisin sweetness becomes a major part of the profile in the final third of the Rocky Patel Vintage 2006 San Andreas, combining wonderfully with the still dominant dark and bitter chocolate note. Other flavors of espresso beans, leather, earth, salted peanuts, cream, oak and yeast flit in and out, and while the black pepper on the finish that was so prevalent in the first two thirds is still noticeable, it is fading fast. The burn has evened up nicely and the draw remains fantastic, while the strength does finally hit a solid medium  right before I put the nub down will a little less than an inch to go. 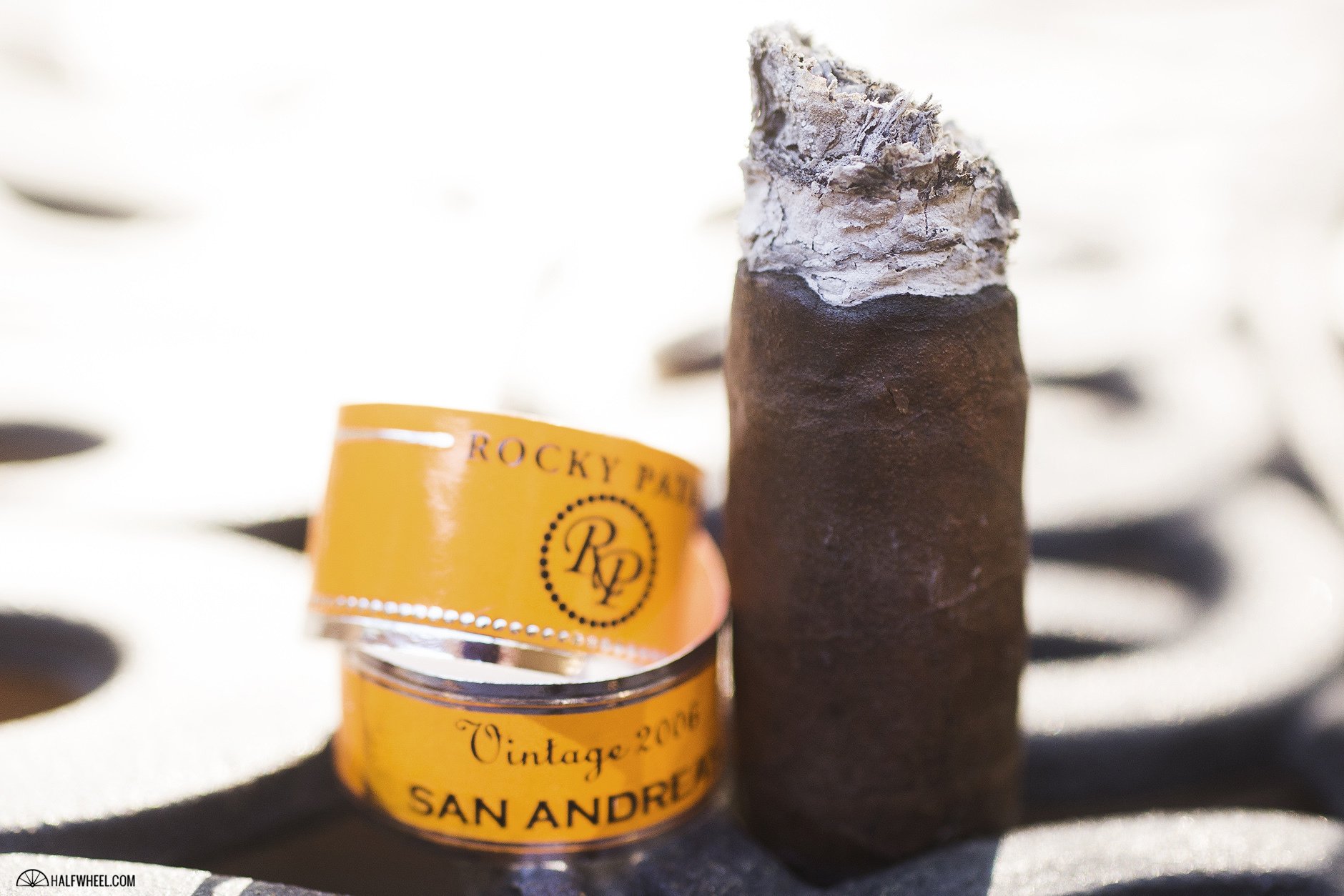 Rocky Patel sometimes gets a bad rap, but I have enjoyed a number of the company’s releases over the years, and I was looking forward to seeing what the Vintage 2006 San Andreas brought to the table. It ended up being one of the best I have smoked from the company, with a complex and smooth profile dominated by oak and dark chocolate as well as some persistent raisin sweetness that only gets stronger as the cigar burns down. This is a very, very good cigar, and one that most people will enjoy immensely if they give it a try.