For its 2017 entry into the ever-growing list of exclusive cigars made for the Tobacconists’ Association of America, Rocky Patel Premium Cigars created a Honduran puro called Martinique.

However, the line has been known about—at least on paper—since July 2016, when it showed up on the company’s price list for the 2016 IPCPR Convention & Trade Show, though the cigar itself was not on display.

Also of note, the cigar comes with the designation of celebrating the TAA’s 50th anniversary, even though that won’t happen until 2018. However, given that the Martinique is an ongoing release, it should likely still be readily available when the proper time has come to celebrate the organization’s golden anniversary.

While this is the second time Rocky Patel has crafted a cigar for the group—the other being a  new vitola for its RP 15th Anniversary line, the 5 1/2 x 54 Robusto Grande—Patel was involved in a second release for the group, the La Palina Bronze Label TAA. It too was heavy in Honduran tobacco, though some Nicaraguan leaves were used in the filler. It too came in the ever-present toro size, sharing a 52 ring gauge though half-an-inch longer than the Martinique. Both cigars were produced at Plasencia’s El Paraiso factory in Danlí, Honduras, which is home to a number of Rocky Patel cigars. 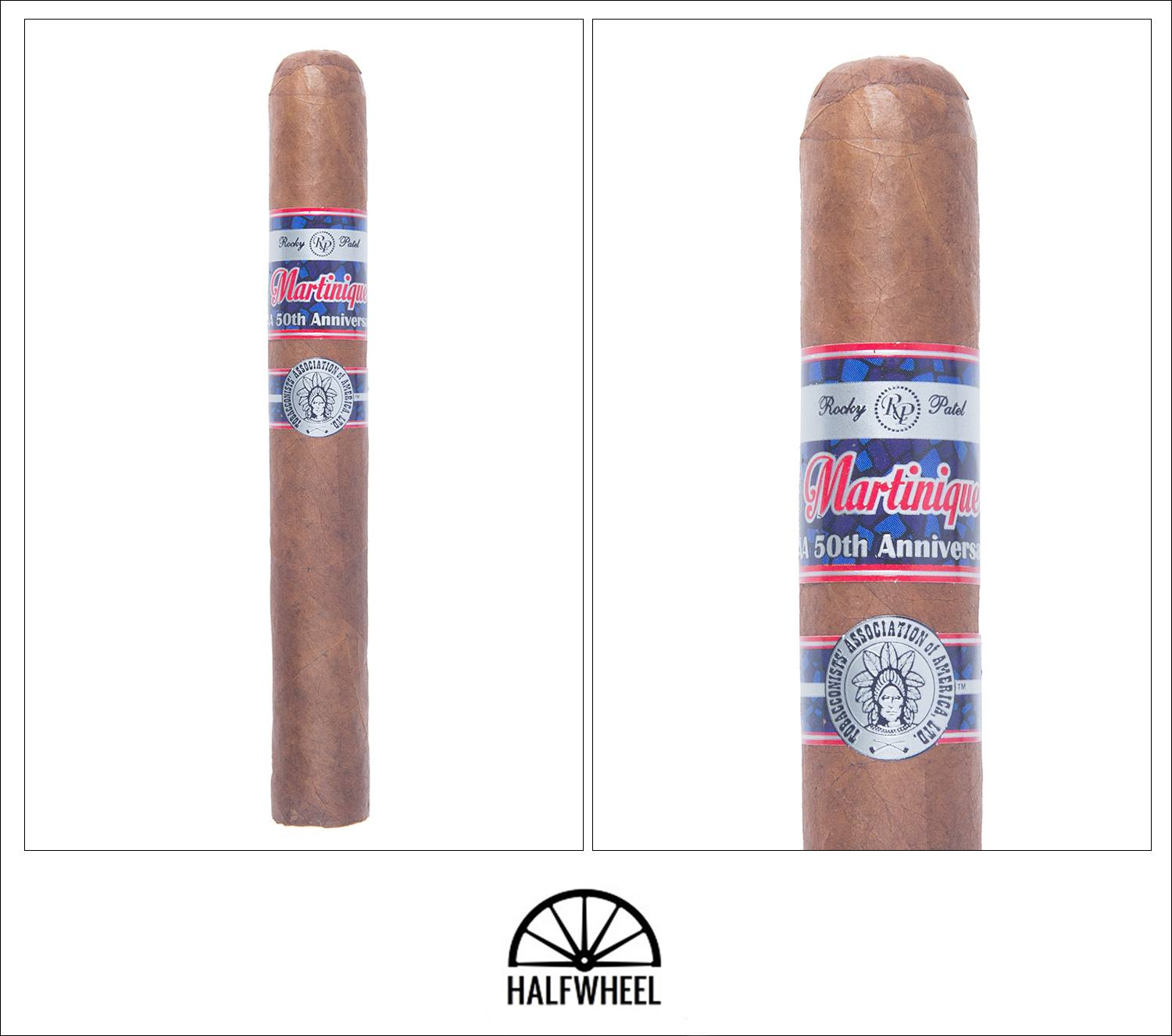 The oiliness in the wrapper leaf is apparent as soon as I pull it out of its cellophane sleeve, though thankfully not gushing with so much that it appears to have been manipulated. There are a few veins on each wrapper leaf that stand out, though none are excessive or distracting. There’s also a fair amount of tooth on the wrapper, something that is worth inspecting in the right light. The wrapper has a clay-like reddish hue to its slightly darker-than-medium brown color, making it both familiar and appealing. The cigar is generally firm and rolled well, with the seams flat but visible mainly due to some subtle differences in color. From the foot I get a light aroma that is highlighted by cedar and dried salami meatiness, with touches of dried fruits and flowers adding some brightness. The cold draw is smooth as far as air flow and mild as far as flavors, muted by what comes across as either a bit of dampness or buttery oiliness. There’s a bit of firewood and pepper to be found with enough exploring, yet neither jumps right out. 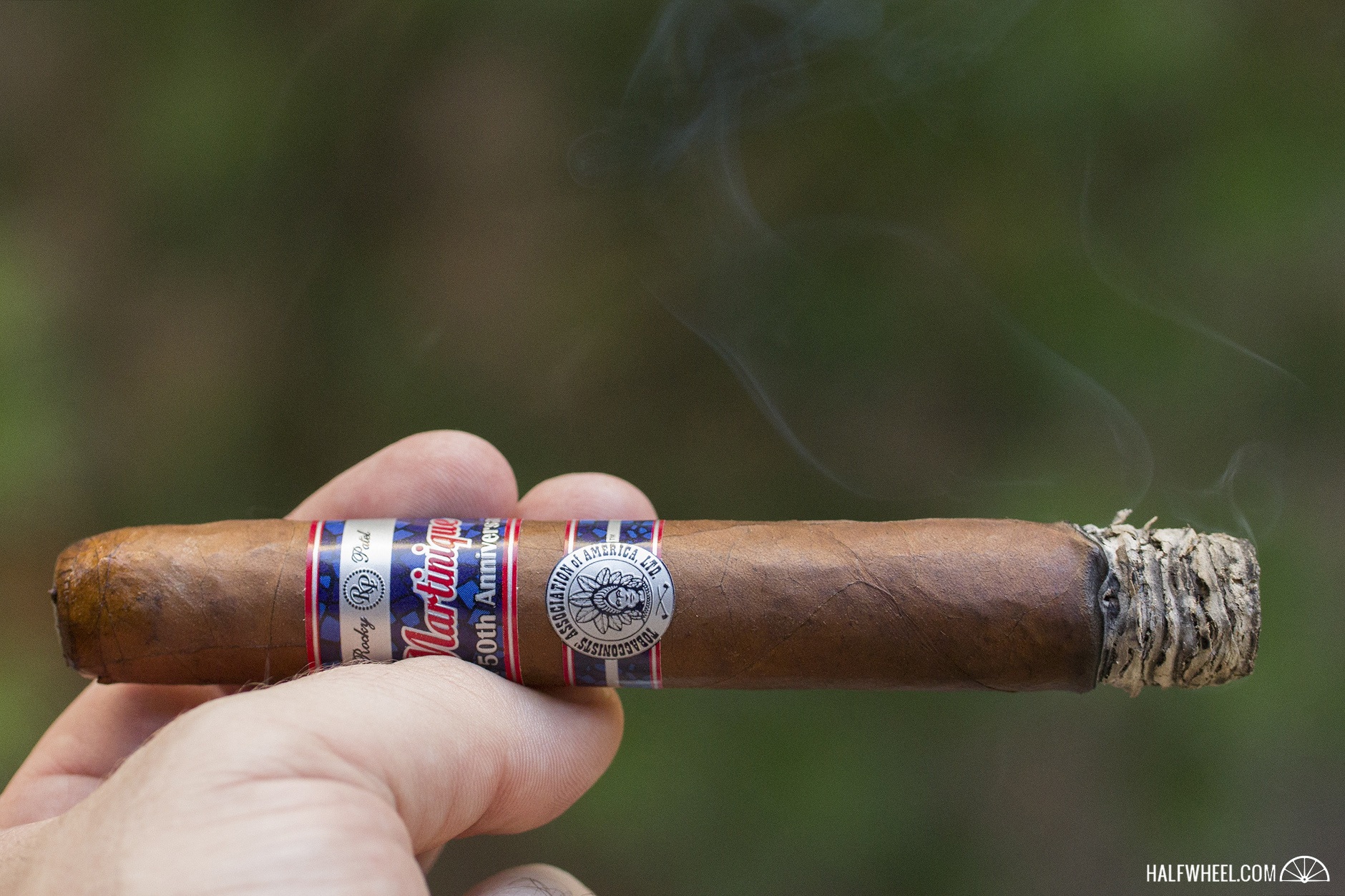 The Rocky Patel Martinique opens with a surprising amount of pepper in the first few puffs and at first it’s hard to pin it down as a specific flavor or expression, but it doesn’t struggle to provide an initial impression as well as a lingering tingle. Part of the issue is that the pepper is so tightly intertwined with the surrounding flavors of salami and cedar that were present in the cold draw and now are alive with depth and complexity. Once lit, the Martinique shows much of the same profile that I was greeted with earlier, including some juicy cedar that really works and seems to be show some of the tobacco’s terroir with a slight hint of earthiness coming through. At the tail end of the first third, the cigar dabbles in hard candy sweetness for a bit, before suddenly shedding some of its thicker base notes while the pepper becomes bright and familiar to both the nose and palate. The cedar then dries out and becomes a bit more vibrant on the front half of the tongue. The draw, combustion, and smoke production have all been good, though the first sample struggled a bit with staying lit and the third’s burn line got just uneven enough to merit a quick touch-up. 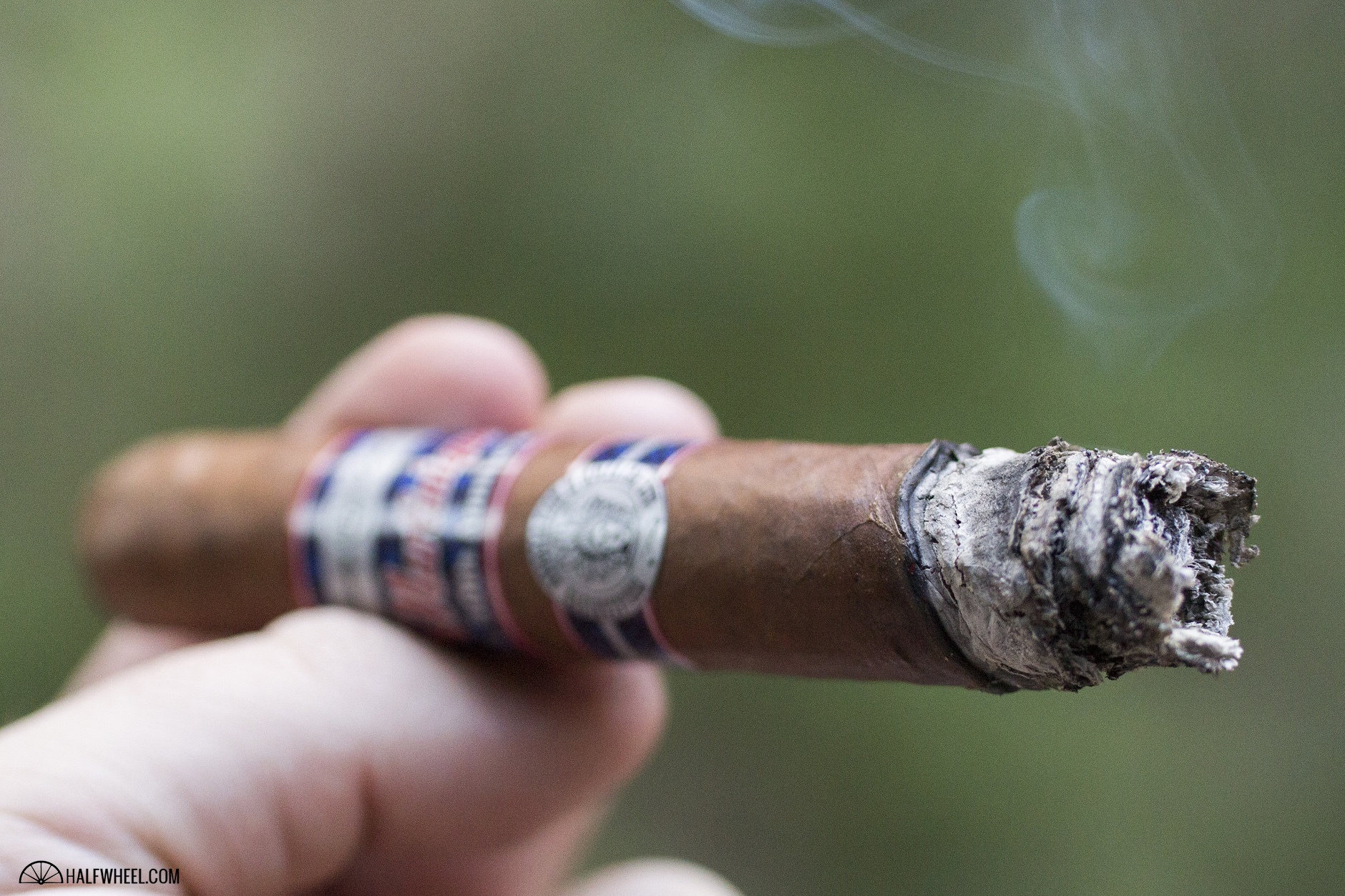 A campfire smokiness from the aroma greets me as I begin the second third of the Rocky Patel Martinique, though it doesn’t show nearly the black pepper that a retrohale delivers. The cigar holds course with its flavors until the midpoint, when it performs another shift in flavor similar to the one at the end of the first third, drying out a bit and moving towards a profile that puts earth, pepper, and a wood flavor that reminds me of aging room shelves towards the front. it’s more upfront than its preceding profile, though at the expense of the richness and complexity it had offered, taking on a profile that dare I say is stereotypically Honduran, something that those who smoke a fair amount of tobacco from the country should recognize. In one sample I get a bit of sourness and harshness, albeit it both have a certain juiciness from the smoke that makes it a unique sensation, while in another sample the candy sweetness returns, close to a lemon Jolly Rancher but without the sourness. The pepper gets more aggressive in retrohales, and I find myself having to pause after the slightest exhale and then slow down to ease out the rest. The cigar still burns quite well and hasn’t required much in the way of attention. 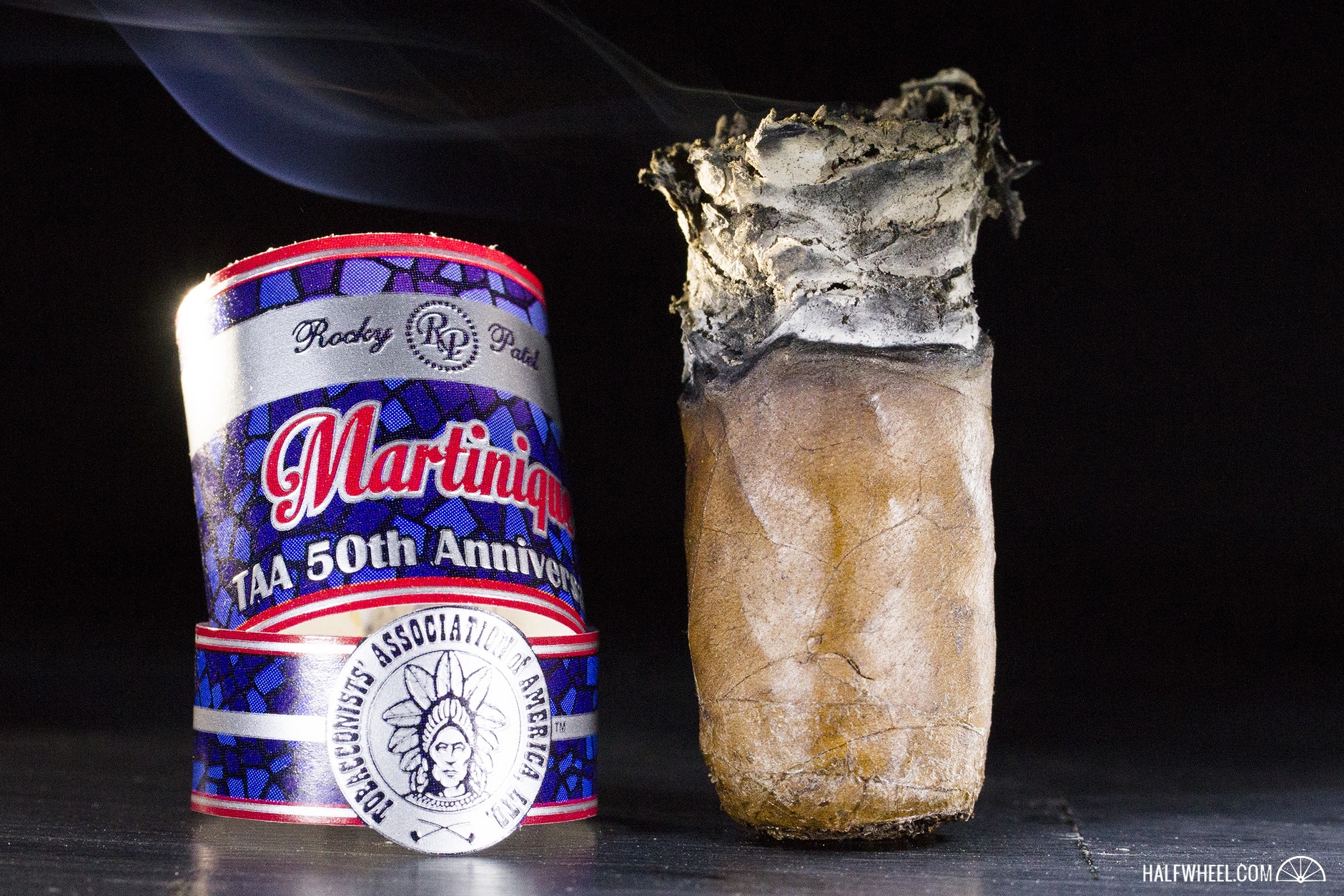 Much like the end of the first third carried right over to the start of the second third, the same happens here, with the previously described dry profile not changing much, if at all. While I’m not as thrilled about this iteration as I am that of the first half, it’s still pretty good. The final puffs of the Rocky Patel Martinique return some of the harshness and sharp pepper was found earlier, with a flavor that at times tastes like red chili pepper flakes that have been set on fire and sprinkled with hot sauce. Thankfully most of the sensation is fleeting, though there is some lingering tingle that calls for water or club soda to help cleanse the tongue of it. It an unexpected turn with just over an inch left, the cigar gets quite hot, and said heat does the cigar in with seeming nothing left as far as palatable flavor left to offer as pepper gets too bright on my palate, leaving behind a sensation similar to eating a pepper or hot sauce that’s simply too spicy. A much slower rate of puffing can salvage things a bit, but with no noticeable change in flavors, I’m content calling this two-plus hour smoke a wrap.

Despite being fairly commonly used, Honduran tobacco doesn't seem to carry the same level of buzz or appreciation that is often found for tobacco from other countries such as Nicaragua, which is quite a shame because when it's good—as it the case in the Rocky Patel Martinique TAA 50th Anniversary—is quite enjoyable. The tobacco used in this cigar shows impressive levels of depth and complexity, while also being blended to offer some notable progressions and transitions that keep the cigar far from monotone. While it's not a perfect cigar thanks to consistent overheating in the final third and a few spots where it gets rather dry, it is quite enjoyable from start to finish. For as much as I dislike the size and would love to see something a bit smaller, I wouldn't hesitate to pick up a few more.