Ever since acquiring the Rock-A-Feller cigar brand in January 2017, Kevin Schweitzer has steadily been working on bringing the cigar line back to stores and ultimately the hands of consumers.

In particular, Schweitzer has been looking into the company’s portfolio for lines that he thought needed to get more attention, and this year focused on one cigar in particular, the Rock-A-Feller Maduro Lancero.

The cigar originally debuted in late 2014 or early 2015 according to Schweitzer, well before he acquired the brand and when the Vintage Rockefeller Cigar Group was under the control of Jeffrey Uvezian, son of Avo Uvezian, and an undisclosed member of the Rockefeller family, who launched the company in 2009. It began to resurface earlier this year in limited quantities, and while he didn’t reveal any truly new products at this year’s IPCPR Convention & Trade Show, the cigar was front and center at the brand’s booth as the featured item.

The Rock-A-Feller MaduroLancero, which measures 7 x 38, is one of seven vitolas in the company’s red-banded line:

The blend uses a Mexican San Andrés wrapper, Ecuadorian binder and Nicaraguan filler, with production handled by American Caribbean Tobacco S.A. in Nicaragua, which the brand shared space with at the trade show this year. 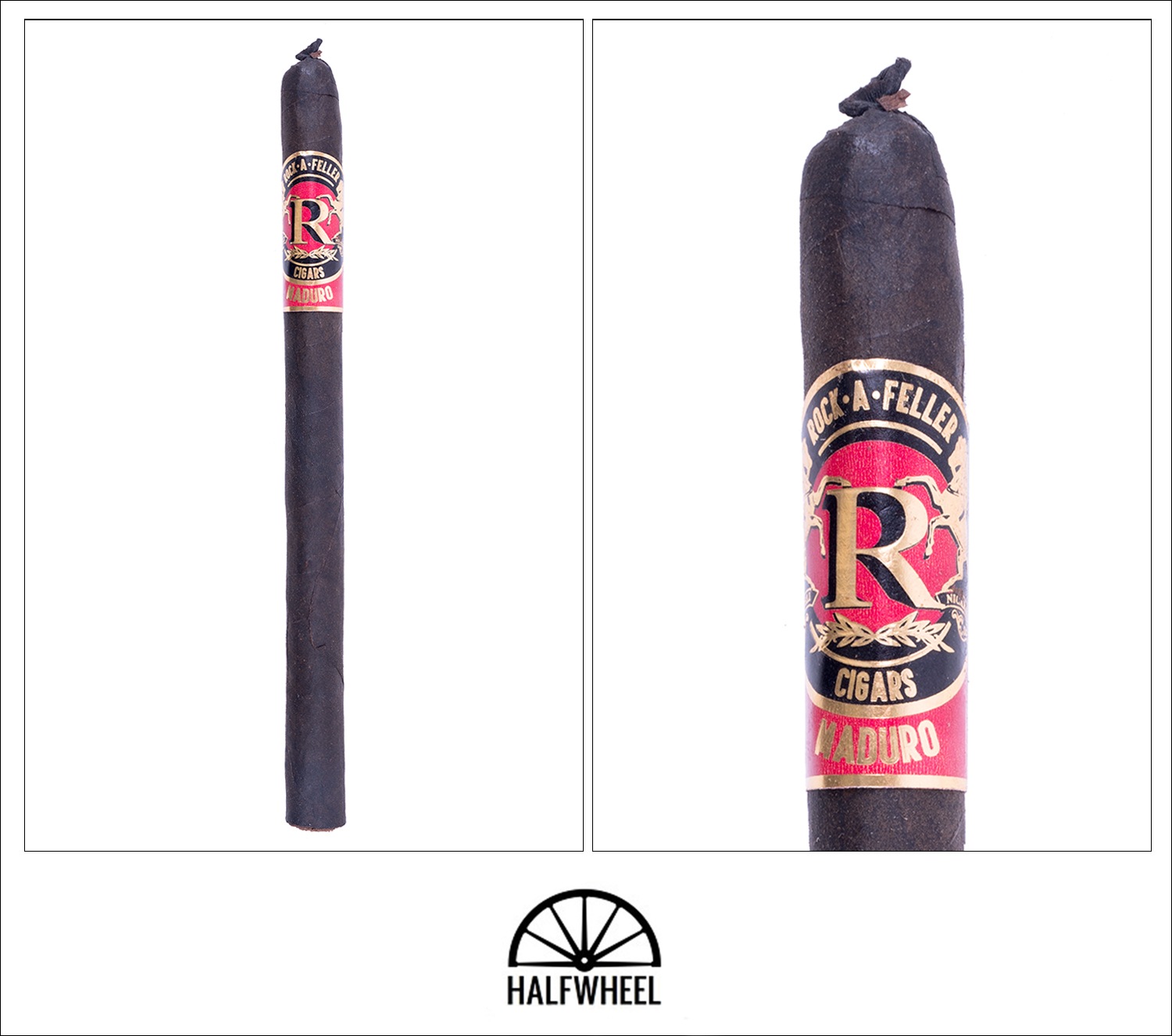 The wrapper on the Vintage Rock-A-Feller Maduro Lancero is one of the darker ones I have seen in recent memory; it’s a very deep brown that skews between dark chocolate and rich earth, depending on the particular sample and lighting. There’s a bit of sponginess to the roll, and while I don’t find any overly soft or hard spots on the first or third samples, the second is much softer and feels underfilled. The decorative cap is executed fairly well, though it’s easy to see it pulling on the rest of the tobacco and doesn’t sit quite as ideally as I think it could, notably off-center on the second cigar I smoked. The foot of the first sample has an interesting mix between wood chips and pepper, neither one standing out but each making the case to be recognized. The second adds a bit of a Raisinets-like aroma, mixing a candy chocolate and the sweetness of raisin, as well as a bit of barnyard and peat. The third is different yet again, more sweetness-forward with a green raisin note leading the chocolate and little to no pepper. The cold draw is smooth and offers varying amounts of resistance, from a bit in the first sample to hardly any in the second and just the right amount in the third. Flavors generally mirror what the nose finds, with varying chocolate sweetness, from dark to very light milk chocolate, with a bit of sweetness and cedar.

The first puffs of the Vintage Rock-A-Feller Maduro Lancero aren’t loaded with pepper, though the second sample has a fair amount to be found both in the nose and on the palate. The first clump abruptly shy of the one-inch mark, closer to three-quarters of an inch if I had to approximate. A cloying chocolate note continues to linger in the profile, yet through the first third it doesn’t seem to want to take the reins. Other than the second cigar, I’m a bit surprised by the lack of pepper, or at least lack of bold pepper so far; there is some kick to be found but it is rather restrained and limited to subtle accents. The one exception to that is the second cigar’s effect through the nose, where the pepper seems to be almost exclusively concentrated, now along with a bit of chalk pulling the aroma in a different direction. By the second clump of ash falling, the pepper has picked up a good bit and the cigar is stretching into more full-bodied territory, though I’m struggling to find some of the more common notes of Mexican San Andrés tobacco. Heading into its second third, the cigar is a solid medium-plus in terms of flavor and body while checking in just north of medium in strength. The draw is fairly easy, the burn line is almost razor sharp and each puff produces plenty of smoke, although the second cigar’s sponginess and loose draw are beginning to get a bit concerning. 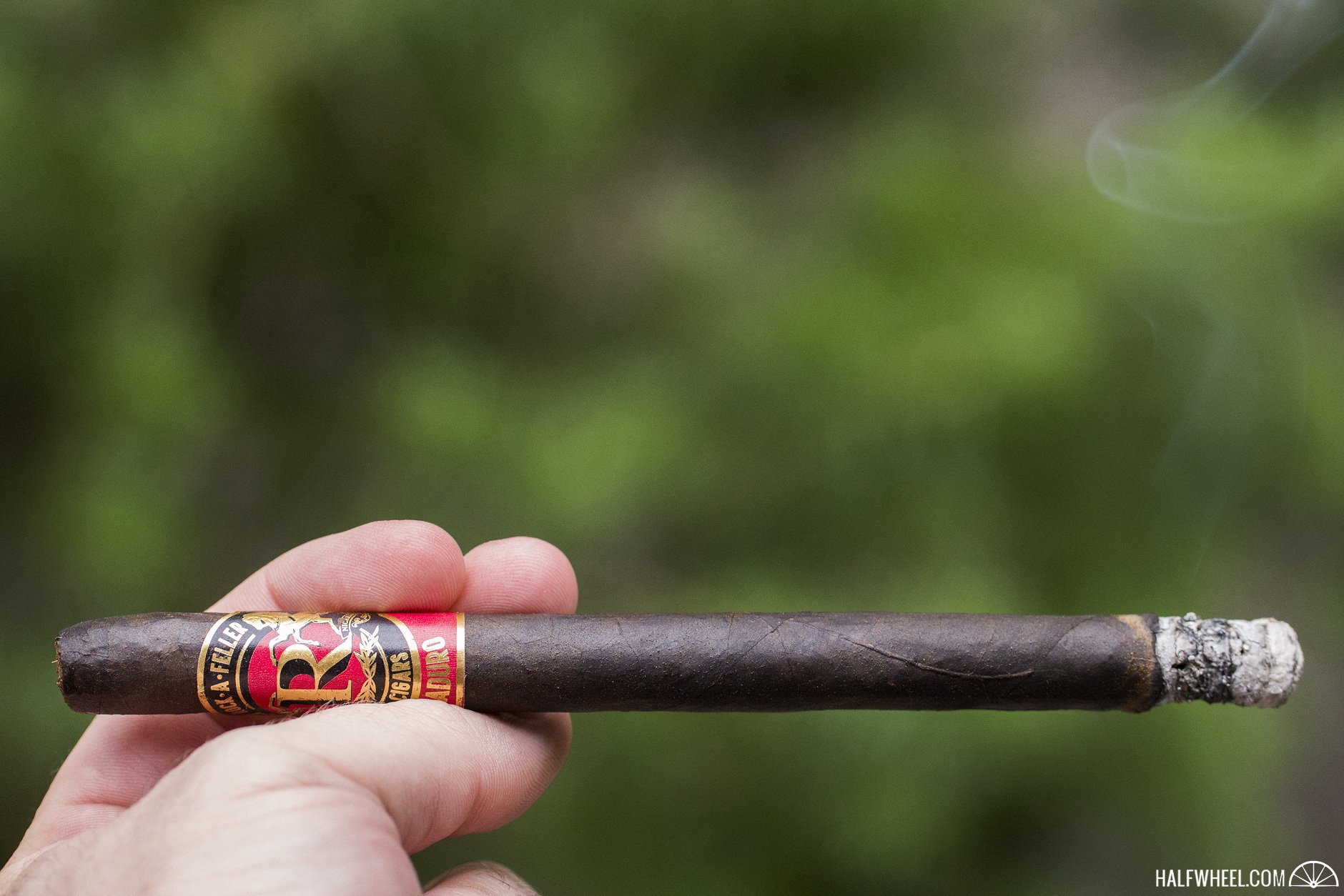 The start of the second third sees the body of the cigar ratchet up a tick, while the pepper and vibrance of the flavors really steps up in the second sample, which thankfully doesn’t seem to be suffering too adversely from a loose draw. I’m still looking for a bit more of the richness that I associate with San Andrés, but there is some earth and sweetness to be found in spurts. In particular, there’s more chocolate to be found around the midpoint, though here it tastes a bit like what you’d find in a s’more: milky and like it came off a campfire. Along with that comes a bit of dry woodiness and a slight retreat of the pepper, subtle changes that don’t drastically alter the profile but give it a slightly new spin ahead of the final third. The technical aspects of the cigar–draw, burn and smoke production—all remain quite good. 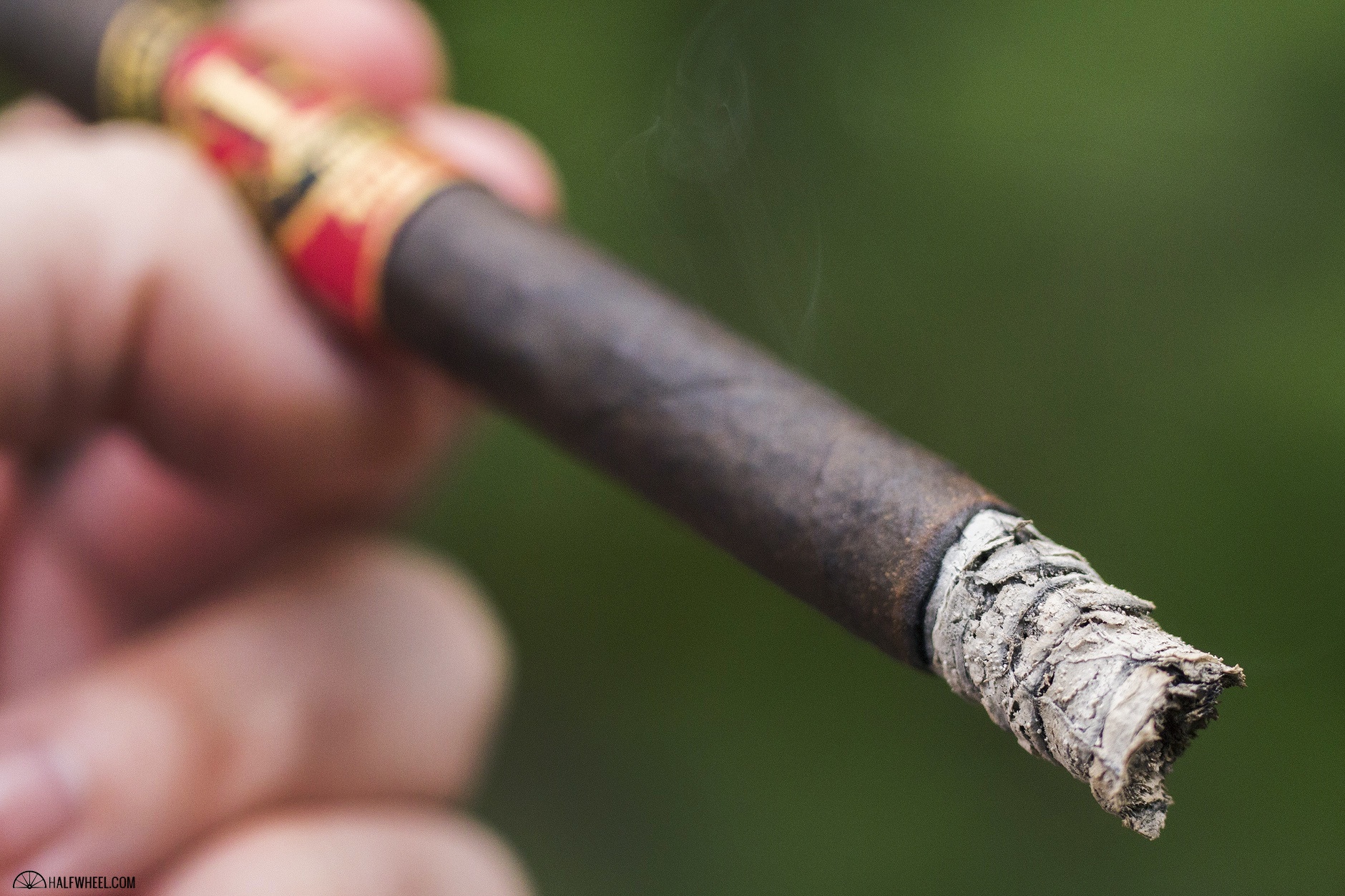 With the band removed and the final third underway, the Rock-A-Feller Maduro Lancero suddenly gets more robust, with the pepper turning sharper and more earth-laden, a pair of dual sensations that haven’t been felt yet to this point and make the cigar a bit more challenging on the palate. It’s not an overly long experience, and fortunately the shift out of it is quite enjoyable, bringing in just a bit of creaminess and a mellower black pepper. That wood note turns to bark in the final two inches, and the cigar seems to have finally found the complexity it is has been toying with up to this point, though it comes with a bit of harshness that I’m attributing to the increased heat component. Given how much of the cigar is left, it’s a shame there’s not more left to burn and subsequently enjoy, but it’s a very solid finish to the cigar. 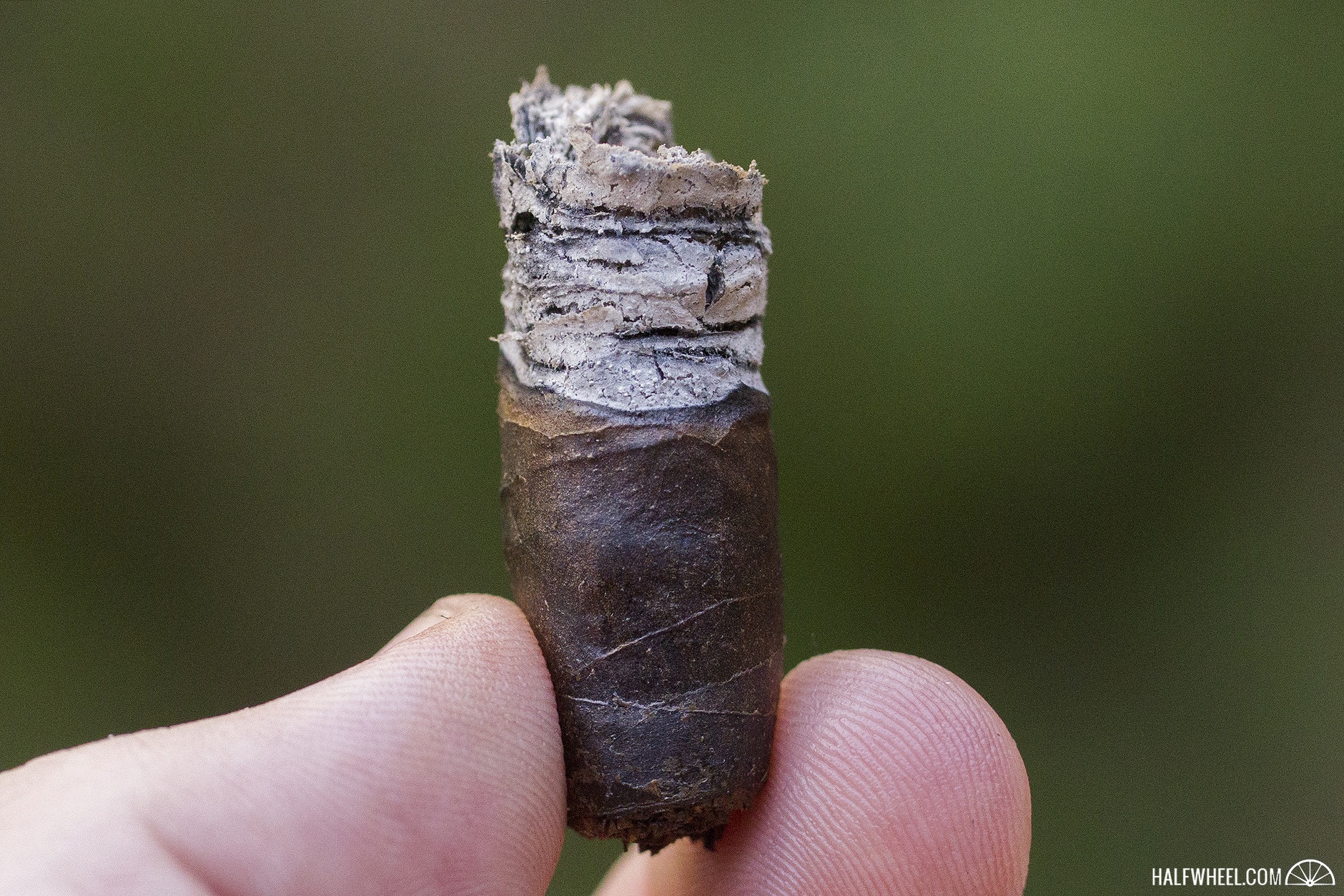 While I haven’t smoked every size in the Rock-A-Feller Maduro line, I’d think the lancero vitola would be as good as any to introduce someone to the line, assuming there aren’t any inherent biases against the size. The balance is generally very good, the draw and construction—second sample notwithstanding—are well above average, and the profile is generally very agreeable. Each cigar had some fairly minor detractor, whether it be the heat in the first, the overly spongy roll of the second or the lack of stellar moments of the third, but the bar on this cigar isn’t perfection, it’s whether or not it’s enjoyable, and after three samples, I’m confident in saying it is a very enjoyable cigar.