The original release was a 5 x 50 Robusto which has grown in the subsequent releases to be a 5 x 52 Robusto. Likewise, the production has increased each year, having started at 100 bundles of 25, with the following two releases growing to 150 and 175 respectively. Here is a picture of all three St. Patrick’s Day releases so far: 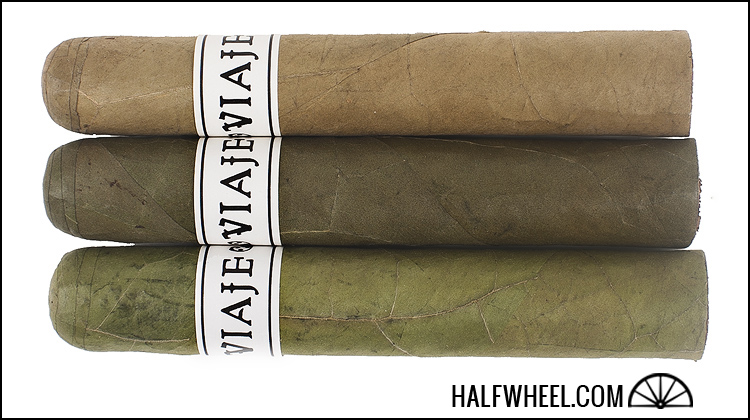 To date there have been 10 White Label Project releases: 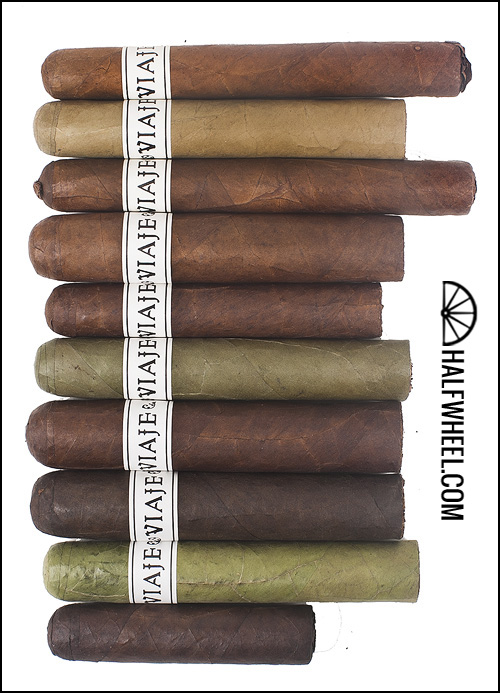 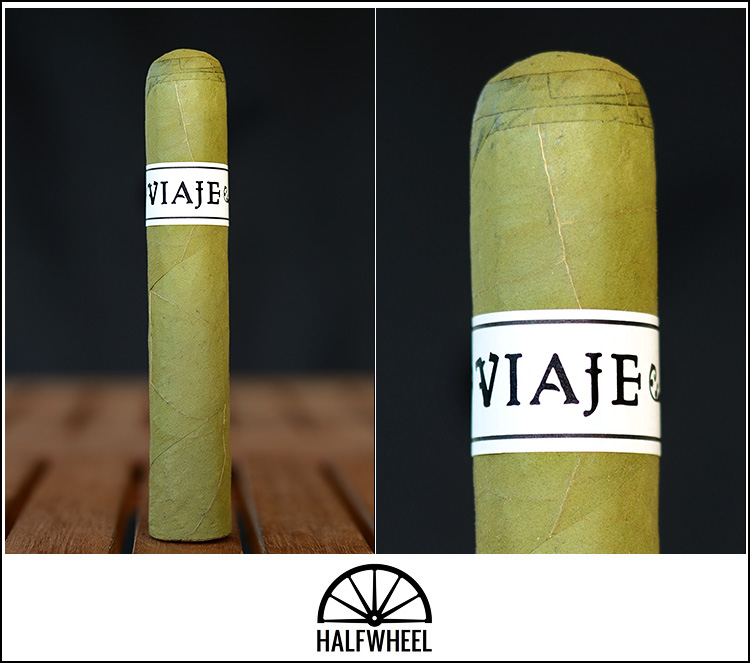 Obviously the first thing you will notice on this cigar is the wrapper. The bright green wrapper is one of the greener Candela wrappers I’ve seen and is a stark contrast to the brown filler tobacco at the foot. The triple capped wrapper is very soft to the touch and has a few visible veins. A squeeze of the cigar shows it to be a little squishy, perhaps a sign of it being slightly under filled  The aroma coming off the wrapper is strong grassy and barnyard notes, almost a mix between fresh cut hay and freshly cut grass, while the foot of the cigar gives off a strong grassy and floral aroma. Cold draw is a creamy, grassy profile with herbal and floral notes in the mix. The draw is a little loose, which supports the earlier theory on it possibly being underfilled.

Lighting the cigar we kick off the first third with a creamy and slightly sweet, freshly cut grass note in the forefront. Other notes include a touch of pepper and dried fruits. The burn quickly starts to get a little squirrely with some very obviously under filled spots. Even with the draw being fairly loose the smoke production is still fine, though when I set it down the cigar almost looks as if it goes out with little to no smoke coming off the foot. The dark gray and white ash has a brownish tint to it and held on strong when I ashed it around one inch, which was a slight surprise considering the other minor construction issues. The overall profile continues to be smooth, creamy, and slightly sweet. Great notes of grass, dried fruits, and some pepper in the background blend together nicely. 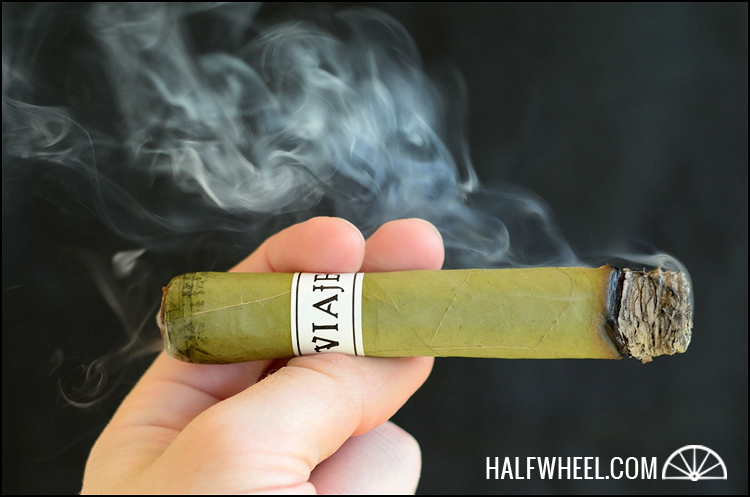 The second third continues with the pleasant profile of grass, dried fruits, and a touch more pepper than before, though the cigar still doesn’t have much bite to speak of. A little ways into this third the construction seems to have gotten even worse. Entire areas of the cigar aren’t igniting as the burn line passes them, requiring many touch ups along the way. Normally I don’t count errant burn lines against a cigar, but this time I’m pretty sure it’s detrimental to the flavor. The enjoyable profile from earlier has flat lined somewhat and become slightly harsh. The ash still holds on fairly well, but the edges are flaky and loose – especially in the areas I have to touch up. 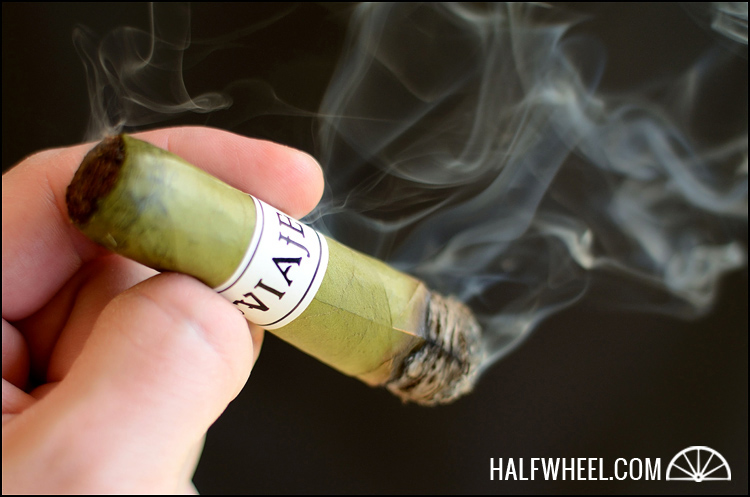 The final third continues with the harsh profile with a touch up needed here and there. Not much change throughout most of the final third. Ironically, towards the end the harshness fades a little bit allowing some grass and fruit notes to shine for a little while before the cigar is too hot to continue smoking. 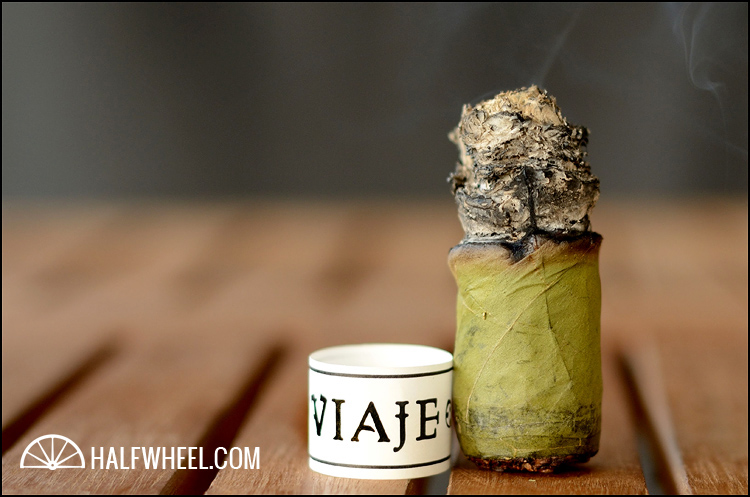 I enjoy an occasional Candela wrapped cigar now and then, and having never tried a Viaje cigar with a Candela wrapper I was excited to get to smoke these. Starting off the cigar had a very promising profile, however the construction issues started causing real problems after barely a third of the cigar was smoked. I wanted to like this cigar, especially with such a great start, but it went downhill so quickly and thoroughly that I won’t be seeking out any more of the 2013 release. There’s always the chance I got two bad cigars in a row, and I genuinely hope that’s the case and the rest out there are awesome. As it stands, I’ll move on and hope that the 2014 release lives up to the potential of what I think this blend really can be.