It’s been more than three and a half years since Viaje unveiled the White Label Project, a range of cigars that run the spectrum from candela to dark Nicaraguan leaves that pack a serious punch. The line was one described by Andre Farkas of Viaje as “the vehicle by which we will release experimental blends, shapes, mash ups, factory errors, etc. It’s a peek behind the factory curtain.”

Since that first White Label Project released in January 2011, a tweaked version of the Viaje Summerfest in a corona gorda vitola, there have been three annual releases for St. Patrick’s Day, a Thanksgiving line known as the Stuffed Turkey that has steadily grown and this year will leave the WLP as well as add a new member, plus a handful of other one-offs. With the release of the PL TB #7, Viaje’s White Label Project collection now 13 releases. Interestingly, this is the first WLP release for Viaje this year, despite having released an otherwise steady stream of cigars under existing and new names and the project having made additions across the calendar in years past.

A spokesman for Viaje told halfwheel that there isn’t much of a backstory to the PL TB#7’s history, other than that “Andre had been wanting to roll a petit lancero for some time.” Instead of adding the size to an existing line in Viaje’s portfolio, however, it was decided that the cigar would come out under the White Label Project. As for the name PL TB#7 translates into Petit Lancero Test Blend #7, as the blend went through seven rounds of revisions before being approved. I’m glad to see Andre Farkas using a size that is a personal favorite of mine and the first impression is certainly favorable. The wrapper covering the long and lean WLP PL TB#7 offers a couple shades of brown along its length, getting lighter near the veins and noticeably darker near the foot, a collection that evokes images of different roasts of coffee beans. There’s a little bit of sheen to it and the texture is fairly smooth on the fingers thanks to some small tobacco hairs. The pre-light aroma has a note that reminds me a bit of beef jerky in that it’s not outright meaty or saucy, but rather a combination of the two that has had time to mesh and mellow. One sample is much brighter and pepper-laden than the other two, but regardless of the intensity it’s an enjoyable and engaging start. The cold draw is equally as interesting but in a much different way, as it is heartier and more concentrated, almost what I think of beef broth tasting like, though again one leaned more towards hot-and-sour soup due to a complex spice note. The air movement ranged from spot on to a little firm but not seemingly problematic, as the cigar has a bit of give to it from head to toe.

The first puffs of the Viaje WLP PL TB#7 are a bit hard to describe other than saying it’s a fairly restrained yet balanced approach for this Nicaraguan puro that I was expecting a bit more kick from. There is a bit of pepper, chalk, earth. An early retrohale is almost surprisingly easy, but it does let on some hints that there’s more in store, and in fact it’s just a few puffs later before the pepper breaks through and retrohales get much fuller. Flavors of earth and coffee start to distinguish themselves on the palate, with a lingering tingle on the tongue left by gradually increasing amounts of pepper. There is a very enjoyable interplay between the cigar’s taste and its aroma, as the nose gets a brighter sensation than the tongue does, yet they work together very well. Pepper doesn’t begin to show up on the palate in earnest until the second third is on the horizon, and with the leash off it takes a few good steps forward in the flavor. It seems to be a bit lighter of a pepper note than I found earlier, making it punchier and eliciting a different physical reaction. So far the cigar has burned well, with ample smoke production, a sharp and even burn line and decent ash for the smaller ring gauge that has a fair amount of black and dark gray in it, almost to the point of being noteworthy. 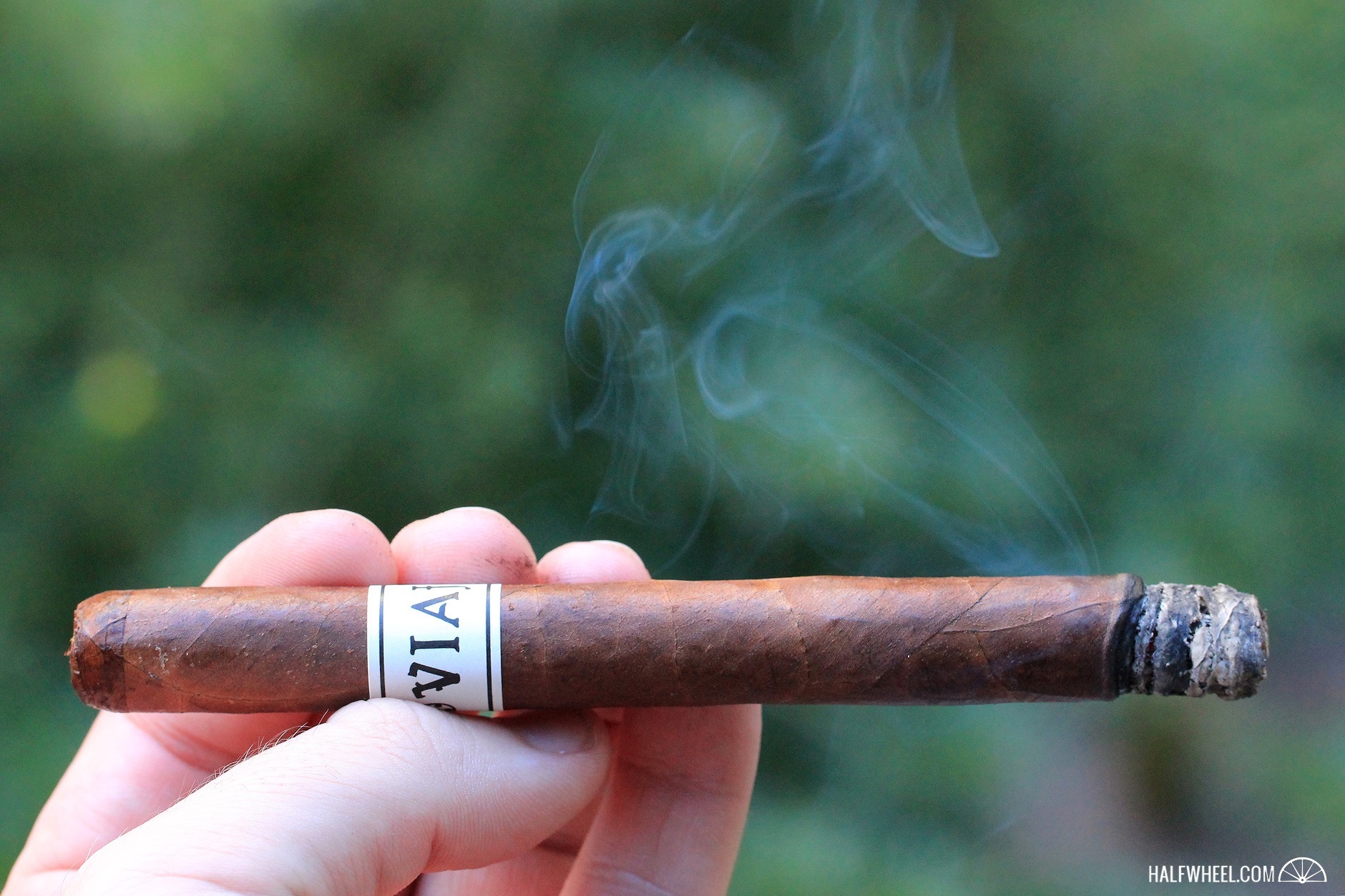 The flavor profile seems to shift gears fairly quickly, shifting to bright notes of chalk and white pepper and shedding the heavier base notes that were present at the start. There is an ample amount of pepper in both the flavor and aroma, yet it doesn’t seem to overpower or dominate the cigar, save for maybe a bit of a residual hit towards the back of the tongue and into the throat. Even with a bit of dryboxing, the first Viaje WLP PL TB#7 isn’t without a few burn issues, needing a total relight at the midpoint despite what has been an otherwise impressive burn. The second and third cigar overcame this with a day and day-and-a-half, respectively, in an empty cigar box, and in fact burned beautifully from start to finish, quite possibly one of the best burning Viajes I’ve had. The strength of the cigar continues to increase but by and large doesn’t regain the heavier base notes and now sits with its toes on the line of being a full-bodied smoke despite not offering what I would describe as lots of pepper, though a few retrohales show that the cigar does have a more polished kick to it. In the nose, the smoke is much brighter and aggressive than it had been earlier. The profile seems to have sharpened up a bit a bit more, with the pepper becoming more pointed and direct, something that gets amplified with too quick of a draw, as is the case with pretty much every smaller ring gauge cigar. Assuming you have helped this cigar along its development process with a bit of dryboxing, there’s no need to rush through it as the flavors can be bright and bold, with no lack of pepper either. Beyond that, there are plentiful notes of earth and coffee, a hearty and robust flavor that is very enjoyable provided its intensity isn’t too much for your palate. Again, burn issues hamper the final third in the first sample which didn’t have as much dryboxing time, but the second and third were as good as I could have asked for; as the burn line didn’t waver a bit. Given the smaller ring gauge, care has to be exercised not to puff too frequently on the cigar in the final third to keep the smoke from getting overly hot and rough on the palate, otherwise it’s a pleasantly full-bodied finish that will keep your taste buds and olfactory senses fully engaged until you decide you’ve had your fill. If there's one thing that can be said about the Viaje White Label Project as a whole, it's that you're never quite sure what you are going to get. For the notoriously tight-lipped company, the line is that much more of a mystery from release to release. In this installment, Viaje delivers a medium-plus to full bodied cigar that shifts more in intensity than flavor, save for steadily ramping up the pepper as the cigar goes along. I can't stress enough the benefits that dryboxing the cigar offered, other than to say it was worth a couple of points to the final score. While not Viaje's most complex offering to date, it's certainly not a let-down when it comes to a full-bodied cigar.