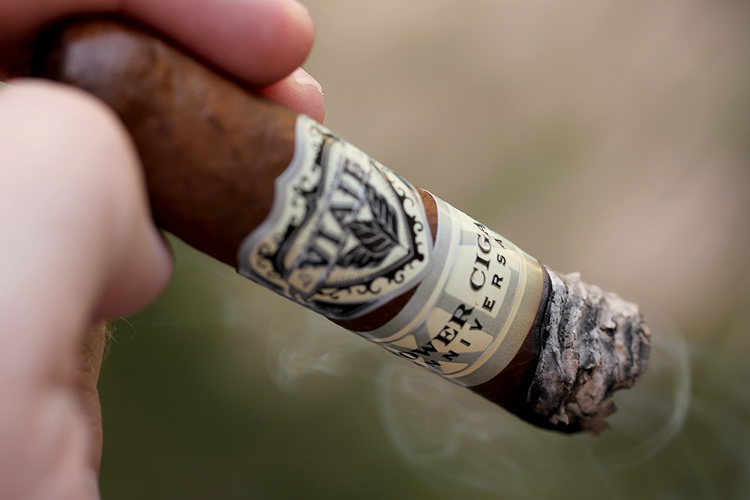 The first question that you’re probably wanting to ask about the Viaje Tower Cigars 45th Anniversary is: what is different about this year’s release from last year’s? The answer is simple: nothing, according to Mark Just, owner of Tower Pipes & Cigars in Sacramento, Calif.. That means the size, the blend, the packaging all stayed the same from last year to this year.

The real question that should be asked is what is different about this vitola of the Exclusivo line from the others? That answer is a little more interesting.

The history of this cigar is fairly well detailed in Brooks’ prerelease review of the 2011 version, with Just and Andre Farkas of Viaje agreeing on the vitola first and then tweaking the blend to fit the size. To get the box-pressed Robusto, a bit of tobacco needed to be taken out of the standard Exclusivo blend; had they left in all the leaves, the torcedores wouldn’t have been able to box press the cigar. While the Tower 45th Anniversary wasn’t the first Robusto in the Exclusivo line, it was the first box-pressed vitola. The 2012 edition becomes the 11th cigar in the line and the second to be released in 2012 alongside the new Robusto.

As you’re likely aware, the first edition of the Viaje Tower 45th came out in 2011, when the store was celebrating its 44th anniversary. The backstory on that is actually pretty easy to explain, which Brooks did in his review:

When Mark Just at Tower Cigars asked Andre to roll him a special cigar for the release in October of 2010, he assumed the entire process would take a little while and wanted to be on the ball for next year. What he did not know is that Andre was already looking for just such a project, and had already thought up a few things. As a result, it took quite bit less time then normal for the cigars to be finished since the initial legwork was already in process. Mark did not want them to sit for another entire year as the cigars have already been rolled and sitting in boxes for seven months now, so he decided to release it a year early.

What was also mentioned was the future of this cigar, although with a bit more vagueness than we have now. Just said that he had 30,000 of the secondary cigar bands made, adding that he wanted this to be a long term release. “I used the same theory that Padrón uses on their Anniversary cigars… 40th, 44th, 45th and so on,” he noted. He said that although the Tower 45th Anniversary only comes out once a year, “it will always be the 45th Anniversary.” 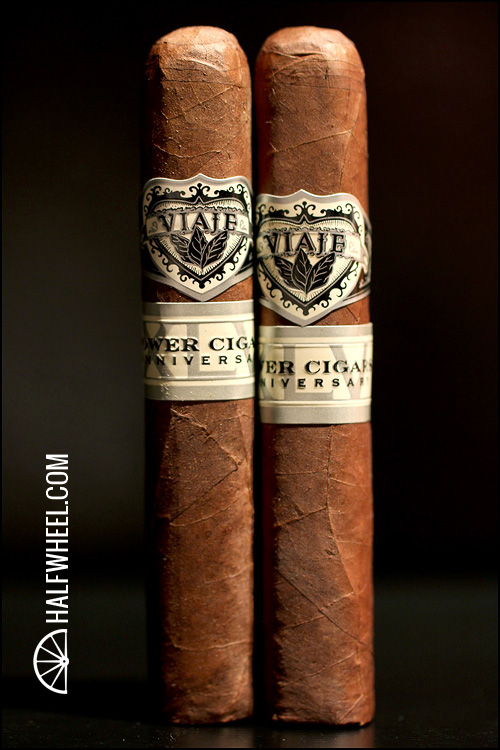 Another note of interest: Just didn’t plan on Viaje being the only manufacturer to produce a cigar for the store’s 45th anniversary. He said that he sent out a few e-mails to a “couple different manufacturers, but nothing came of it.” 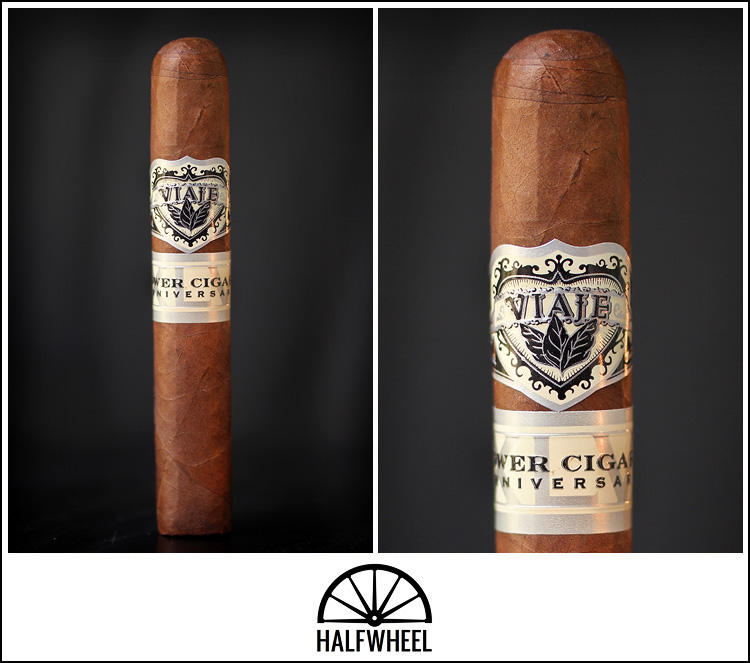 The pre-light aroma is rich and complex, loaded with stout, oatmeal, warm chocolate, wheat bread and a bit of wet bark that gives the nose and brain quite a knot of smells to untangle well before the first match is struck. There is just the faintest hint of spice – so much so that it’s almost non-existent in two out of the three cigars smoked. The cold draw is on the firm side, but not problematic, and shows varying levels of flavor and pepper, but without the complexity of what comes off the foot. The Tower 45th itself is very attractive, a medium-brown wrapper with just a few veins and a smooth appearance and in a classic vitola that fits nicely into the hand.

As the Viaje Tower Cigars 45th Anniversary is being toasted, distinct notes of barnyard start to come out in the smoke. The first third of the cigar starts out with a bit of pepper and spice that shows up more as a tingle on the tip of the tongue and the lips than as full-bore spice on the palate. There is some of that though, but the sensation isn’t quite as strong. That changes fairly quickly as the spice picks up intensity quickly, turning the cigar into a pepper bomb within the first inch. There’s plenty of smoke and an underlying note of chalk starts to emerge in the milder sticks. 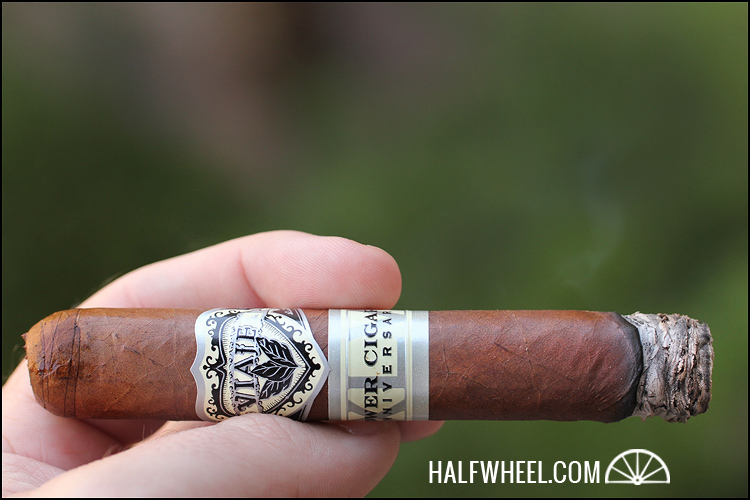 The intensity settles down a bit by the second third, but the Exclusivo certainly hasn’t let up and fans of milder cigars would likely find this much too strong, as each puff is loaded with a hearty serving of pepper and spice. There is a point just shy of the band where the cigar develops what’s sometimes referred to as a mustache and needs to be touched up to keep the burn line fairly straight. A woodsy note starts to come out in this third, though the predominant spice makes it a bit harder to isolate. There hasn’t been a touch of sweetness to this point, something that was more noticeable – and very enjoyable – in the 2011 version. 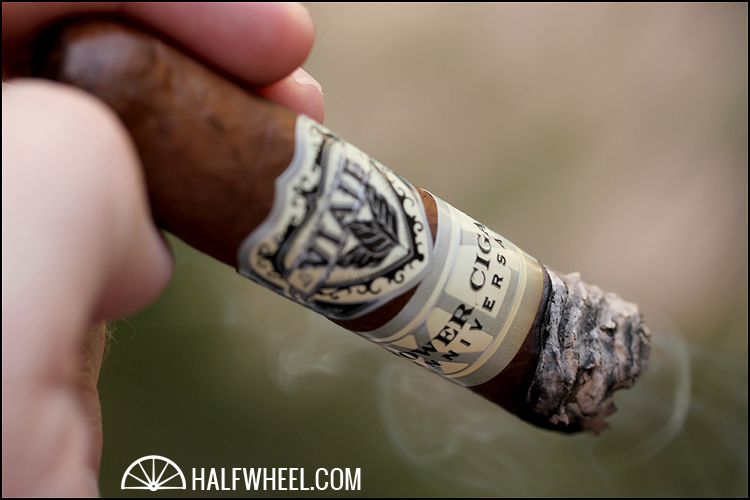 With combustion issues starting to emerge in two of the cigars, the final third of the Viaje Tower Cigars 45th Anniversary continues a mellowing of the spice and pepper, though it is remains fairly full-bodied. It’s not as brash or in your face as the first third, but it hasn’t given up its core strength. The woodsy notes have turned to a more leather flavor, though they both still play a supporting role to the driving spice and pepper. Smoke volume also decreases in the final third, going from an almost billowing first third to a more average amount of smoke by the time the cigar needs to be put out. 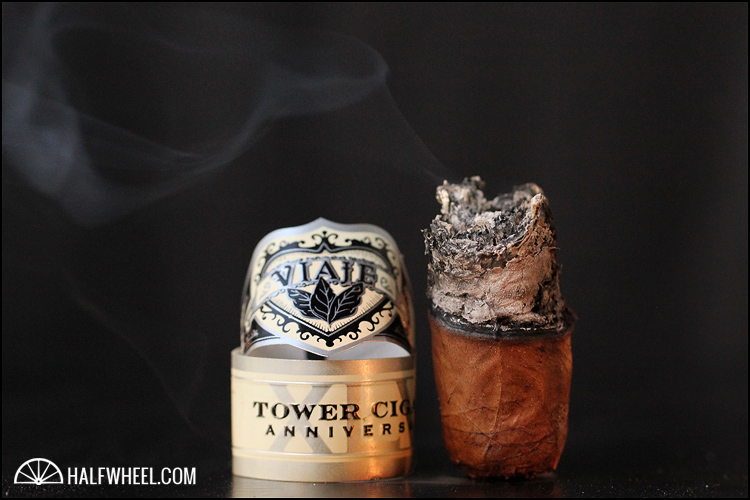 Much like Brooks noted in his pre-release review of last year's Viaje Tower Cigars 45th Anniversary, this cigar has a much different flavor profile than the event-only Corona Gorda or the Robusto that came out earlier this year, both of which I smoked during a Viaje Zombie release party and really fell in love with. The removal of some leaves to allow for the box press certainly affects the taste, and while I don't want to say this, it's not for the better. While I haven't smoked the entire Exclusivo line, the Corona Gorda remains the high-water mark and the 2012 edition of the Tower Cigars 45th Anniversary falls just a bit short of it in terms of complexity and balance, although it tries to make up for it with strength. I'd certainly have no qualms picking up at least five more of these for aging, and fans of the Exclusivo line shouldn't hesitate to secure a box of these, but put it against the Corona Gorda or even the 2011 edition of the Tower Cigars 45th Anniversary and I can guarantee you which one gets left on the shelf.