Launched in 2010 as a cigar available only to retailers who attended the IPCPR convention and trade show that year, Viaje’s Satori line was met with enthusiasm from retailers and as reported sold out pretty much immediately. Since then it has seen five different releases with varying levels of critical acclaim. From what I have seen, though, Satori has lost a good bit of its initial steam and doesn’t seem to generate much buzz when it arrives on store shelves.

Other than the fact that it has become about as regular of a release as one can expect from the small-batch brand, there isn’t any particular reason why it wouldn’t sell. Yes, it’s a bit on the expensive side but there are many cigars that could apply to that seem to sell just fine. The artwork and presentation are both as good as any in the line if not among the best, and there isn’t any exotic tobacco used that would make someone inherently avoid it. Yet for whatever reason, it’s just not a line that I find myself or many of my friends rushing to purchase.

The word satori is a Japanese Buddhist word that can mean enlightenment, awakening, comprehension or understanding, depending upon which source you base your translation. The kanji symbol is featured both on the back of the band as well as on the boxes.

Andre Farkas of Viaje has included notes inside boxes of the Satori that provide a little more personal explanation of the name.

Satori is the Japanese word for enlightenment, used to refer to a deep or lasting realization of the nature of existence. Experience has shown there are many paths to enlightenment: some may meditate, while others may practice Yoga. For me, cigars have often been the catalyst for achieving heightened awareness and a greater understanding of our complex and changing world. I have had the good fortune to meet many interesting people with whom I have spent countless hours deep in conversation with a fine cigar in hand. The experiences they shared with me, while we enjoyed our fine cigars, have truly enriched my life. This cigar is a tribute to the enlightenment one can achieve while indulging in one of life’s great luxuries.

While it has been an annual release that arrives shortly after the annual IPCPR convention and trade show, the line has seen a bit of change in those five years. Most notably, between the 2010 and 2011 releases, the wrapper changed from a Nicaraguan oscuro to a Mexican San Andrés, becoming the first cigar in the Viaje portfolio to use that leaf.

For the Satori’s fifth installment, Viaje released four sizes, three of which has previously been released and a new size for 2014. 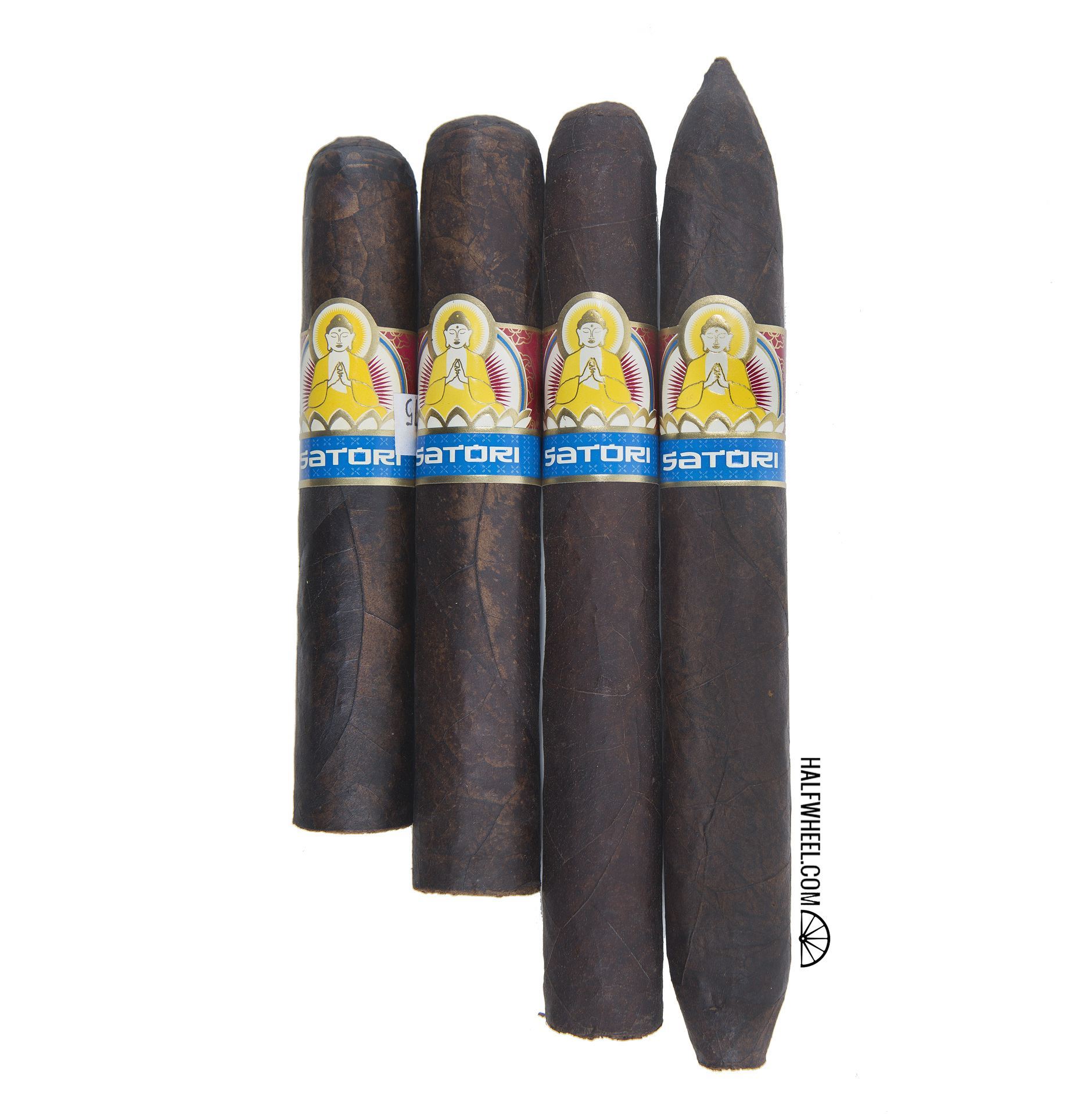 According to the company arya is Sanskrit for “noble, not ordinary, valuable, precious or pure.”

As is the protocol for Viaje, the Satori shipped with two other releases, both of which were new for 2014: Viaje Collaboration 2014 and Viaje Cache. 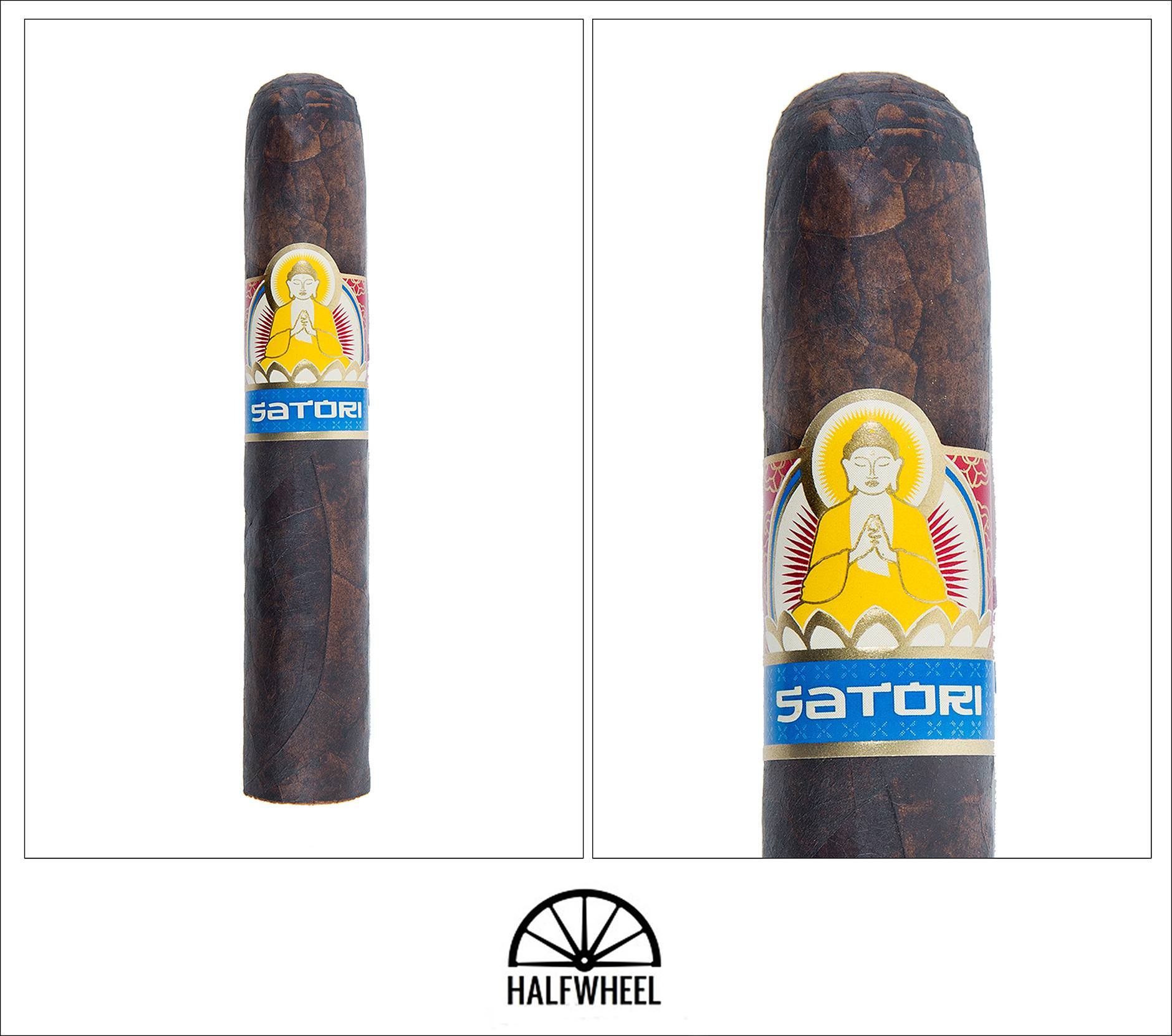 The Viaje Satori Arya is covered in a dark brown wrapper with a good bit of oily sheen, which is reflected in the right light is quite a visually appealing look. Color is by and large uniform, though there’s a little bit of variance that again will depend on the light you’re smoking on to really see the differences. There’s some ridge-creating veins but for the most part they are fairly small and don’t affect the feel. It’s a uniformly firm cigar with just a bit of give, a touch firmer towards the cap with most of the give showing up below the band. The pre-light aroma has an underlying grape jelly sweetness that is thick and very pleasant in the nose, off of which touches of wheat and fireplace kindling evolve. The cold draw is just a touch firm but by no means concerning, with a similar set of flavors though they come across a bit milder, with the sweetness generally not as present as the wheat and wood.

I’m a bit surprised by the relative mellowness of the Viaje Satori Arya’s start, as in the first cigar I smoked neither the first few puffs or the first retrohale are particularly strong. Instead, both have touches of thick dark berry sweetness that are more aperitif than first course. There is strength to be found though, and it’s not long after lighting that in each cigar strength and pepper are presented, as with the burn line about a quarter of an inch along an unexpected level of both come out from the cigar and into the eyes and palate. It’s a hit-and-retreat approach, with the strength dialing back for a few puffs before returning again shortly thereafter. Burn issues start to present themselves fairly early on as the burn line can’t stay straight past the half-inch mark, and the wrapper seems to crumple a bit as the burn line nears it as opposed to burning cleanly. There’s plenty of smoke coming off the cigar, but the draw feels a bit tight and getting adequate air through the cigar is a challenge at points. With the fairly frequent relighting, it’s tough to focus on individual flavors, but there are some bold coffee and tree bark with touches of pepper mixed in, with the flavors feeling heavy on the palate and leaving a slightly sour aftertaste. One redeeming technical quality is the ash, which does a fantastic job holding on through the entire first third of the cigar, finally forcing the removal of the band, a process which takes out the ash as a consequence. 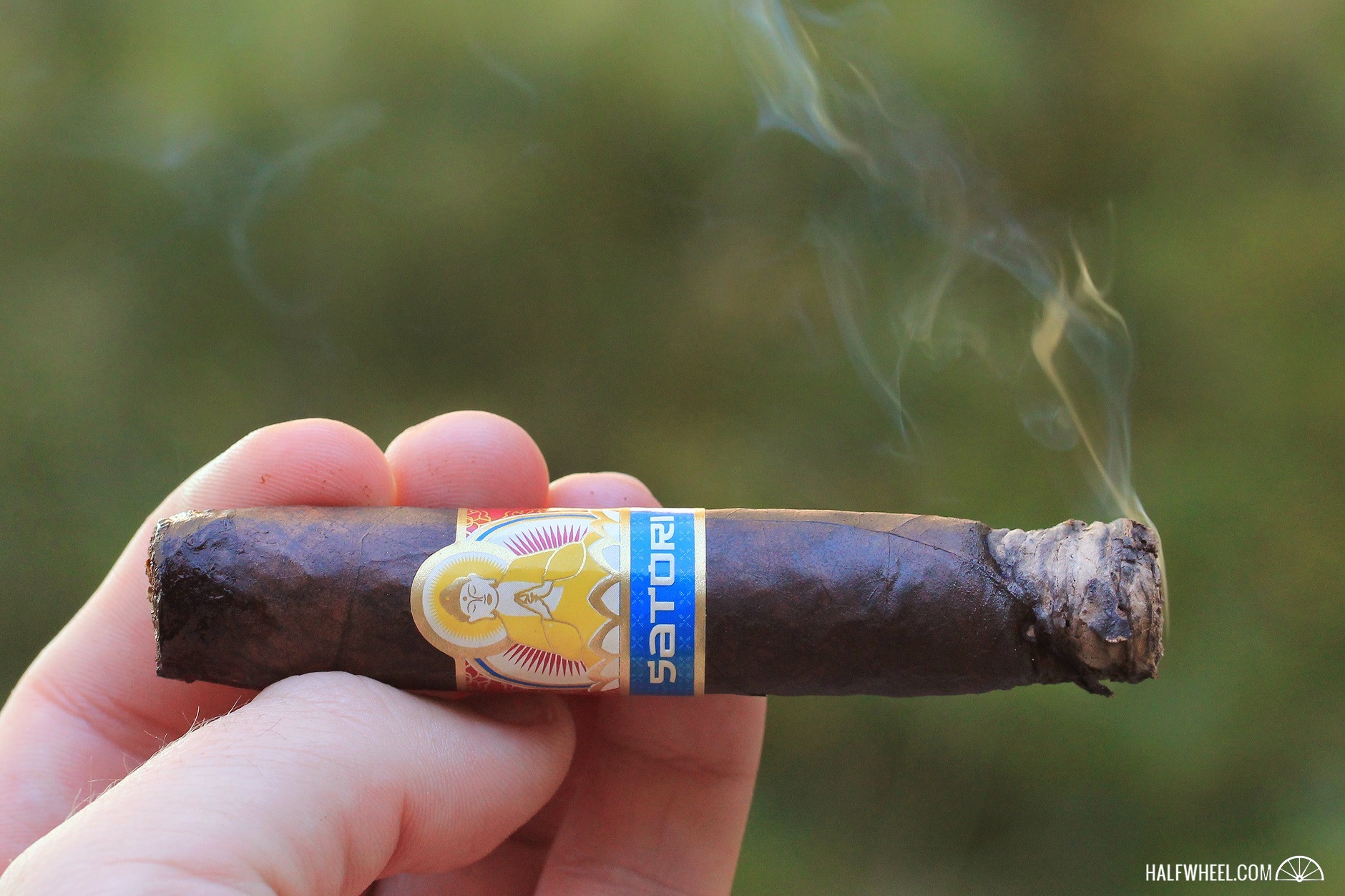 With the first two cigars smoked for this review, the second third is where things generally started going off track, as the burn issues presented too much of a challenge to overcome, leaving me frustrated and without anything substantive to say about the Viaje Satroi Arya. For the third cigar, which I dryboxed fairly extensively, there weren’t any burn issues, and as such was able to pick up much more from the cigar. After a brief mellowing, the flavor shifts to notes of warm nuts, dry soil and a bit of leather, with an underpinning of pepper to keep the flavor level well above medium. What touches of sweetness were in the flavor have left by the midpoint, though there is some left in the cigar’s aroma. There’s an uptick in the intensity of the flavor at the start of the second half that comes on fairly quickly, drying out the flavors a bit while the aroma picks up some kick as well. As the burn line approaches the start of the final third, the cigar starts to dial in on what I consider the signature Mexican San Andrés terroir flavors, as the technical performance has improved by leaps and bounds thanks to the dryboxing. 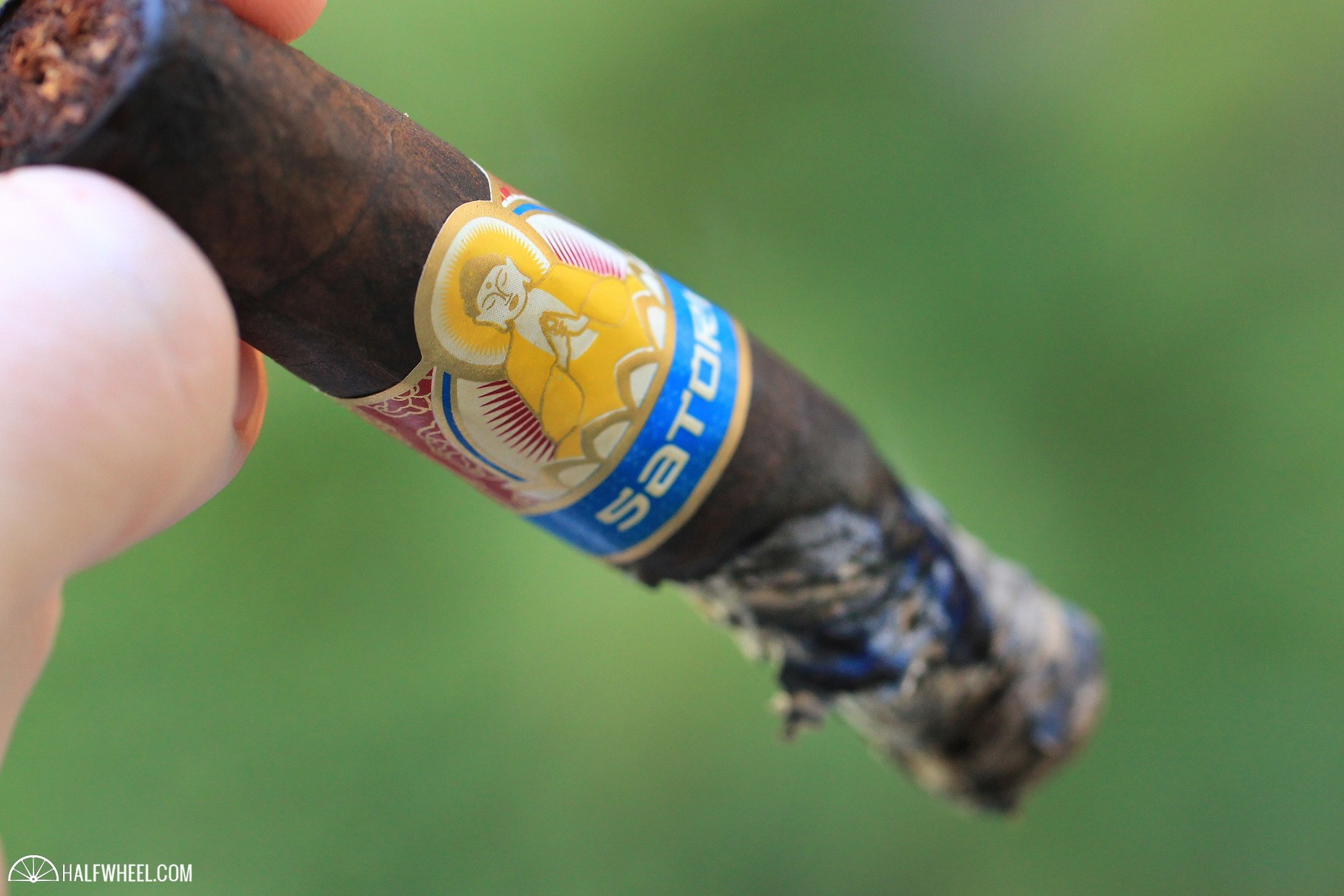 It’s the first puffs of the final third where I get the first touch of harshness, though I hesitate to call it that with any sense of negative connotation, as it’s more that the cigar has shifted gears to a place where pepper has returned to a bit more prominence, and when combined with the dry earth note, creates a different sensation when the smoke enters my mouth. There’s not a lot of pepper or spice in the final third, though more than what was found in the previous segment, and what is there is mostly felt on the aftertaste and exhale. The draw stays a bit tight but offers no issues, with the ash doing as good of a job holding strong as it has to this point. The cigar’s strength gets felt particularly acutely in the final puffs; up to this point it’s been fairly middle of the road as far as delivering any kind of physical kick. With the cigar burning properly, the only issue is how many “final” puffs you can take, as the intensity of the smoke gets to be a bit overwhelming with the burn line approaching the eyes and nose, and the smoke hitting both them and the palate at the same time. Yet when it burns right, the flavors seem to keep calling me back for one more draw. 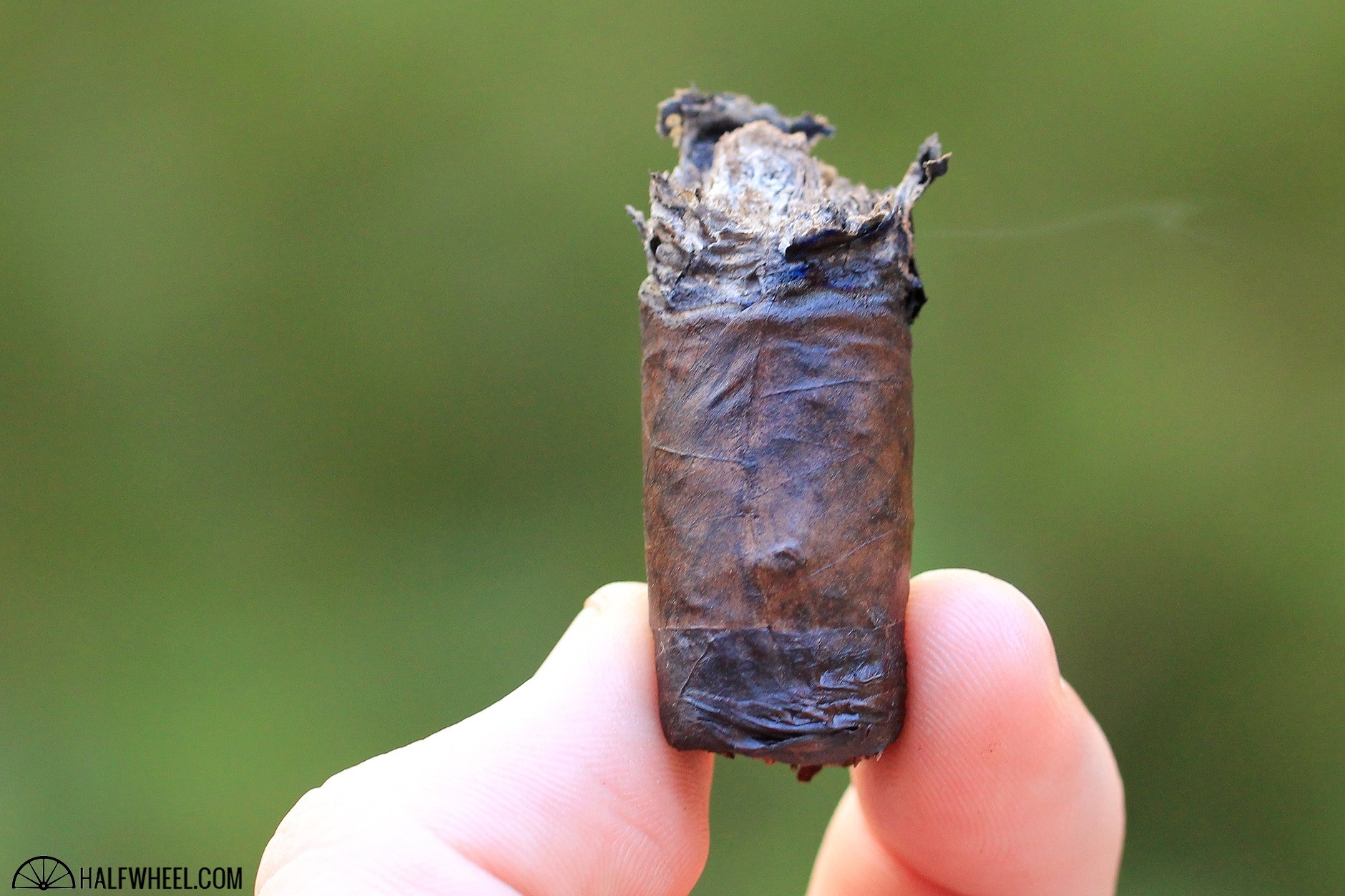 Part of my hope in reviewing cigars is to give you a fairly good idea of what to expect from a certain cigar, be it in flavor, strength, aroma or simply overall impression. While it can be a challenge to succinctly translate the experience of smoking a cigar into words, it's usually not that difficult. But with the Viaje Satoria Arya, there's the challenge of trying to bring together three fairly different experiences, all stemming from the same issue—burn problems—to give you an idea of what to expect. The third cigar—the one that was dryboxed—is the clearest example, offering the fullest flavors and truest notes of the San Andrés wrapper; though that assumes you don't have a cigar like my second sample which simply wouldn't burn past the midpoint, or the first one that managed to be smokeable but only after a number of relights doing who-knows-what to the flavor. If you like Mexican San Andrés tobacco, the Viaje Satori Arya should be on your radar, but be forewarned that it might need time to dry out before smoking it, and this might only be determined by smoking one, which sets you up for some possible frustration and disappointment. As much I would like to give this cigar an incomplete, that's not how it works, so take this review with the caveat that while the cigar is good, it may come with some challenges getting it to perform right off the shelf.