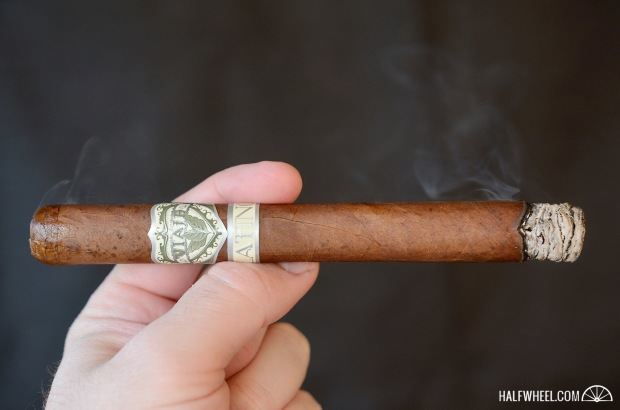 In 2010, Viaje introduced the Oro Reserva and Platino Reserva series. Much like the popular Habanos S.A. Edición Limitada series, the V.O.R. and V.P.R. cigars are annual releases of specific vitolas that used aged tobacco to create special versions of the company’s former core lines.

The Viaje V.O.R. No. 5 finished in second place on the 2010 version of Cigar Aficionado’s top 25 list, a major victory for the small manufacturer. While Viaje has not deliberately said the cigar is named after the magazine, emails sent to retailers describing this year’s release of the V.O.R. and V.P.R., which is named Aficionado, mentioned the ranking.

This year’s version is a box-pressed churchill, which is priced at $11.20 per cigar rand sold in boxes of 25. It marks the fifth consecutive year for the Reserva series and the ninth vitola to date. The wrapper is amazingly smooth with a silky oily feeling to it. There is a little bit of mottling in the medium brown wrapper, that looks quite nice. There’s a slight give to the cigar, just enough to be appreciated without any soft spots in it. The aroma coming off the wrapper is a deep earthy barnyard with manure, hay and leather while the cold draw is made up of milk chocolate, cinnamon, a bit of black pepper and a touch of vanilla bean.

It starts with a burst of black pepper, sawdust, a bit of cinnamon and cocoa. The draw is a bit snug, and thusly the smoke production is only at a medium. The burn is quite even starting out, even to the point of correcting itself from a slightly uneven light. Even at well over an inch the ash refused to let go with light taps. A little bitterness enters the profile, covering up the more delicate notes of cinnamon and cocoa while the sawdust and black pepper are still there. The second third loses the bitterness that plagued the last couple of inches, allowing a return of the cinnamon but more of a red hot cinnamon instead of a fresh ground cinnamon. The sawdust has changed more into a general woodsy note and the black pepper is still present.The draw has opened up some and with it I’m seeing an increased smoke production. The burn is still pretty great, though there was one touch up that I needed to do. Out of nowhere a bit of burnt sugar enters the picture, though it’s a little closer to caramelized sugar, so it’s nice. Towards the end of this section the burn gets quite crooked, which is slightly unexpected, but a quick touch-up later I hope I’m back on track keeping this burning evenly. The final third unfortunately heads back into the bitter and harsh territory. The caramelized sugar is gone, the woodsy note is a little more along the lines of a charring campfire, while the hot cinnamon and black pepper remain the same. The burn line is pretty jagged, though overall you could say it’s evenly jagged without one side lagging behind. The draw is the highlight, still nice and open producing plenty of smoke. I had been enjoying Viaje’s releases for the most part lately, but this one was a little disappointing. Between some construction issues that definitely affected the flavors and the harshness that was pretty prominent in all three samples, it put a damper on what could have otherwise been a pretty enjoyable profile. I don’t think rest will do it much good, as I don’t think they were over humidified, but I guess time will tell on that.