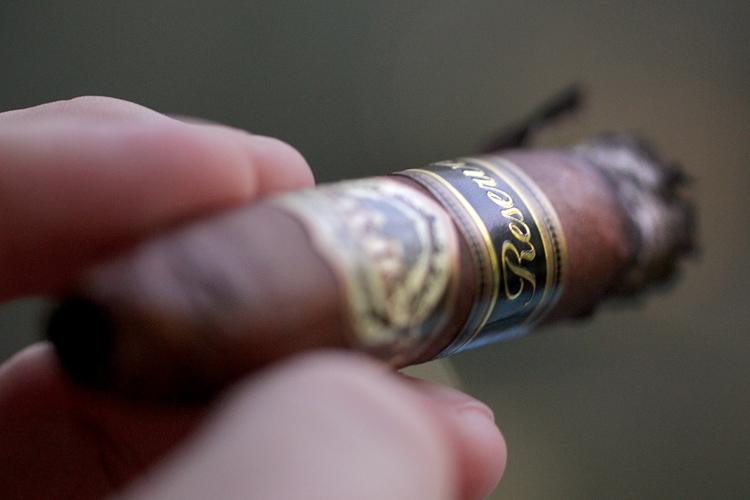 Following up on a finishing second in the 2010 cigar of the year rankings by Cigar Aficionado, Viaje put out another installment of their heralded Oro Reserva line in June 2011, this time in a Double Torpedo vitola with a closed foot.

The V.O.R., as it’s known, seemed to slip under many people’s radars when it was released in 2010,and with its extremely limited production, became almost impossible to find once the rankings were released over half a year later. Both the Oro Reserva and Platino Reserva, known as the V.P.R., were available in two formats in 2010 – a box-pressed robusto known as the #5 and a box-pressed Toro known as the #6.

The 2011 edition shares a vitola with 2010’s Double Edge Sword, another extremely limited production cigar that was sold through just five retailers who each got 25 of the 125 boxes, each containing 25 cigars. Other than the abundance of bands, the Viaje Oro Reserva’s Double Torpedo shape is the most notable thing from a visual standpoint, and something that will likely generate a few double takes. The closed foot immediately asks the question – cut me or burn through me? –  and it seems either could be the correct answer. The wrapper is a bit rustic looking at points, though its smooth texture overshadows the veins present, with only one of the three cigars smoked having any notable vein issue. It’s not a big cigar by any means, and the box-press gives it a form that fits nicely in the hand. For the first and third cigars I smoked, I left the capped foot intact to see how burning through it worked. With just a quick light I was able to get right through it and get a good spicy draw going. With the second stick, I clipped the foot to get a bit different experience, being able to test the cold draw and aroma of the clipped foot before lighting. The draw was a bit firm and had a note of chocolate milk most present –  smooth, creamy and a bit sweet –  though there was also a touch of spice in the mix. The pre-light was much less distinctive, though there was a definite pepper component.

There’s a long-lasting and very pleasing note that stays on the palate in the first third as the cigar rests – it’s not like a spice that you can’t shake from your palate, rather a conversation that you can’t get out of your head. Notes of grilled beef, leather and ligero-driven spice define the first third, all big flavors but well balanced and able to show a restraint that is often missing in Viaje’s cigars. Entering the second third, a pronounced note of grilled steak hits my nose – that fresh from the kitchen smell of an impeccably cooked piece of meat from your favorite steakhouse. The spice and pepper quotient isn’t as strong as I’d imagined it would be – it’s more robust than it is peppery with meaty and leathery notes standing out. The strength of the pepper blast out of the gate has tempered nicely into a more well-rounded flavor with the spice becoming more a flavor component, rather than the star of the show. Some final hits of pepper and spice close out the final third of the Viaje Oro Reserva Double Torpedo, waking up what has become a fairly dormant flavor profile. The cigar doesn’t lose its robust core and never becomes harsh or bitter, but it becomes a bit familiar over the first 90 minutes, and as they say familiarity builds contempt. Thankfully the pepper added a last minute flavor change that capped off a very enjoyable cigar. Viajes have been largely hit or miss for me, either because they were just too damn strong and felt like they needed time to come together or because they just lacked any great flavors. The Oro Reserva, however, bridged that gap as well as almost any Viaje I can remember smoking. There's strength and big meaty flavors, but it's also balanced and refined. Both the Oro and Platino Reservas dial back the assault-weapon grade spice into a connoisseur-worthy flavor. Which one is better is more or less a toss-up in my book – give me either and I'd be plenty happy.