Viaje’s Late Harvest, introduced two years ago, were born from the tradition of wine making, which refers to the grapes that are left on the vine longer than usual resulting in a higher sugar content and a sweeter wine. Since harvesting later doesn’t exactly translate into tobacco production, Andre Farkas instead took higher primings of the plant, which have been on the plant the longest. Farkas took this idea a little further with his latest release, the Late Harvest Hang Time.

Also referring to wine industry practices, the cigar uses the highest primings of the plant available. Here’s what was posted on Viaje’s Facebook page about the cigar:

In wine parlance, hang time refers to the length of time between flowering and harvest – in other words, how long the grapes hang on the vine. Hang Time is an extension of the Late Harvest line. It differs from Late Harvest in one important way. The wrapper selected for Hang Time is from a higher priming, which allows for more time on the stalk resulting in a more intense smoking experience.

Hang Time comes in the same two sizes as the rest of the Late Harvest line: 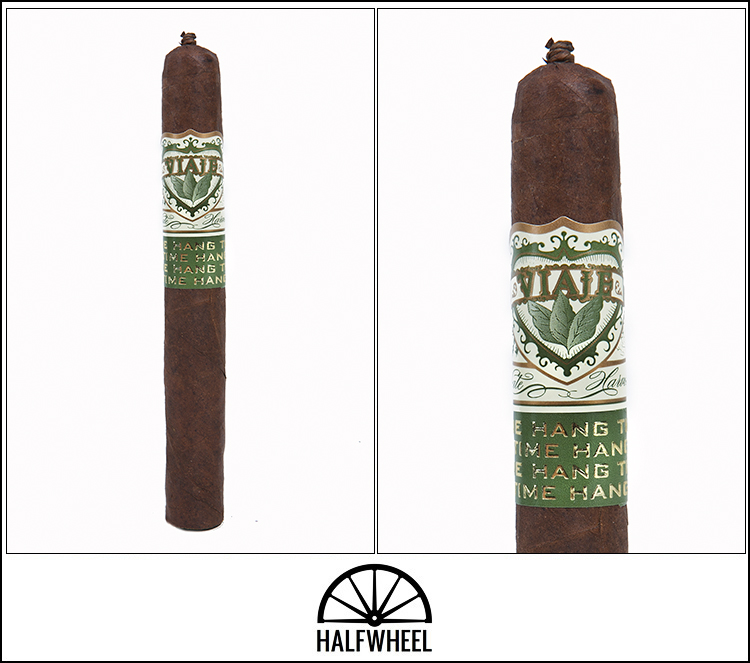 The wrapper is a mottled dark brown, and though it looks like there would be a few palpable veins, it is smooth and silky soft with the slightest oily sheen. Capped off with a very intricate pigtail, the overall look is quite appealing. Squeezing the cigar reveals only a few slightly soft spots with the overall cigar being fairly firm. While the wrapper has a singular sweet barnyard aroma to it, the cold draw is a little more flavorful with a very strong sweet fig note mixed with some rich tobacco notes.

Starting into the first third I get some of the same notes from the cold draw. Sweet fig, rich tobacco, mocha, burnt sugar and the slightest bit of pepper make up the initial profile. The burn isn’t perfect, but acceptable with only minor touch ups needed. While the construction seems solid, the ash falls off before it reaches half an inch. The second third sees the sweet fig note turn into more of a general sweet dried fruit note. While the burnt sugar is still around, it isn’t nearly as harsh. Background pepper and mocha notes have all but disappeared. Some cracks have appeared in the wrapper, and even though they don’t seem to be affecting the burn any, the burn is a little uneven and is requiring touch ups throughout. Despite the varying ability of the ash to hang on very long and the uneven burn, the draw is actually nicely in the middle of the acceptable range. Smoke production might not rival some of the more billowing Nicaraguan puros, but the Hang Time still produces a good amount of smoke. The final third has more of the sweet dried fruit note dominating the profile and the pepper has returned to the background with some spice and nutty notes rounding out the whole thing. There is a bit of harshness that’s been showing up off and on throughout the cigar that’s gotten a little stronger towards the end, though not enough to drown out the flavors. Finishing the cigar up, I’m able to smoke it until the end without it getting too hot. 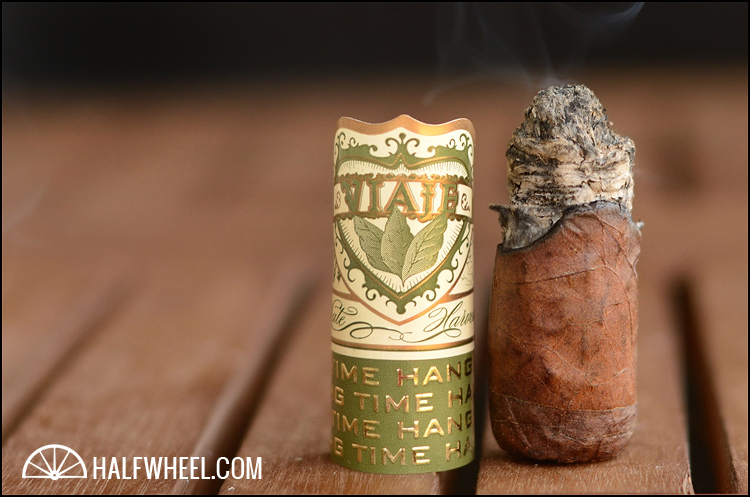 It’s been awhile since I've smoked any of the Viaje Late Harvest, but I think the Hang Time extension to the Late Harvest line is an interesting one. Overall the flavors were quite enjoyable, but the harshness that faded in and out through the cigar along with the burn issues detract from it a bit. It will be interesting to see if some time and rest smooths out the harshness, though I can’t see rest really fixing the burn issues as the cigar didn't seem over or under humidified. While a full box of 35 cigars makes it a little harder for me to recommend buying a full box, I still think this cigar is decent now and has some potential to get better. As of now, I can easily suggest seeking these out and getting your hands on a few to try for yourself.