Since debuting in December 2009, the Viaje Holiday Blend has been a regular Christmastime arrival in the humidors of Viaje retailers, at least until this year.

It was believed that the 2013 installment of Holiday Blend would appear as normal in December when Andre Farkas posted a picture of the cigar on his Facebook page. The regular release was slated to be a 4 1/2 x 56 vitola that came with a note from Farkas saying that ”(Holiday Blend) has a counterpart this year. Just waiting on the new stick.”

Just a few short weeks later, Farkas announced that the normal Holiday Blend was being shelved for this year, replaced by a cigar called the Viaje Holiday Blend Christmas Tree, a 4 x 60 Short Torpedo that would be a new shape for the line. In the announcement of the delay, Farkas said:

VIAJE UPDATE: Unfortunately production delays have made it impossible to release HOLIDAY BLEND this year. However, we will have something new for you to enjoy. HOLIDAY BLEND CHRISTMAS TREES are on their way……….

The new Viaje Holiday Blend Christmas Tree would be the second extension to the Holiday Blend brand that does not contain the regular release following last year’s release of Candy Cane, a barber pole that had originally been scheduled for a 2011 release before production delays finally bumped it to 2012.

This new vitola broke a string of 54 ring gauge releases for the Holiday Blend, as all seven previous releases had shared that same ring gauge, though with varying lengths:

While the cigars began showing up at retail around Thursday, December 19, the official nationwide release was held on Saturday, December 21 at the newest location of Anthony’s Cigar Emporium in Tucson, Ariz. The store previously hosted Farkas in May 2012 for the release of the Viaje Zombie. 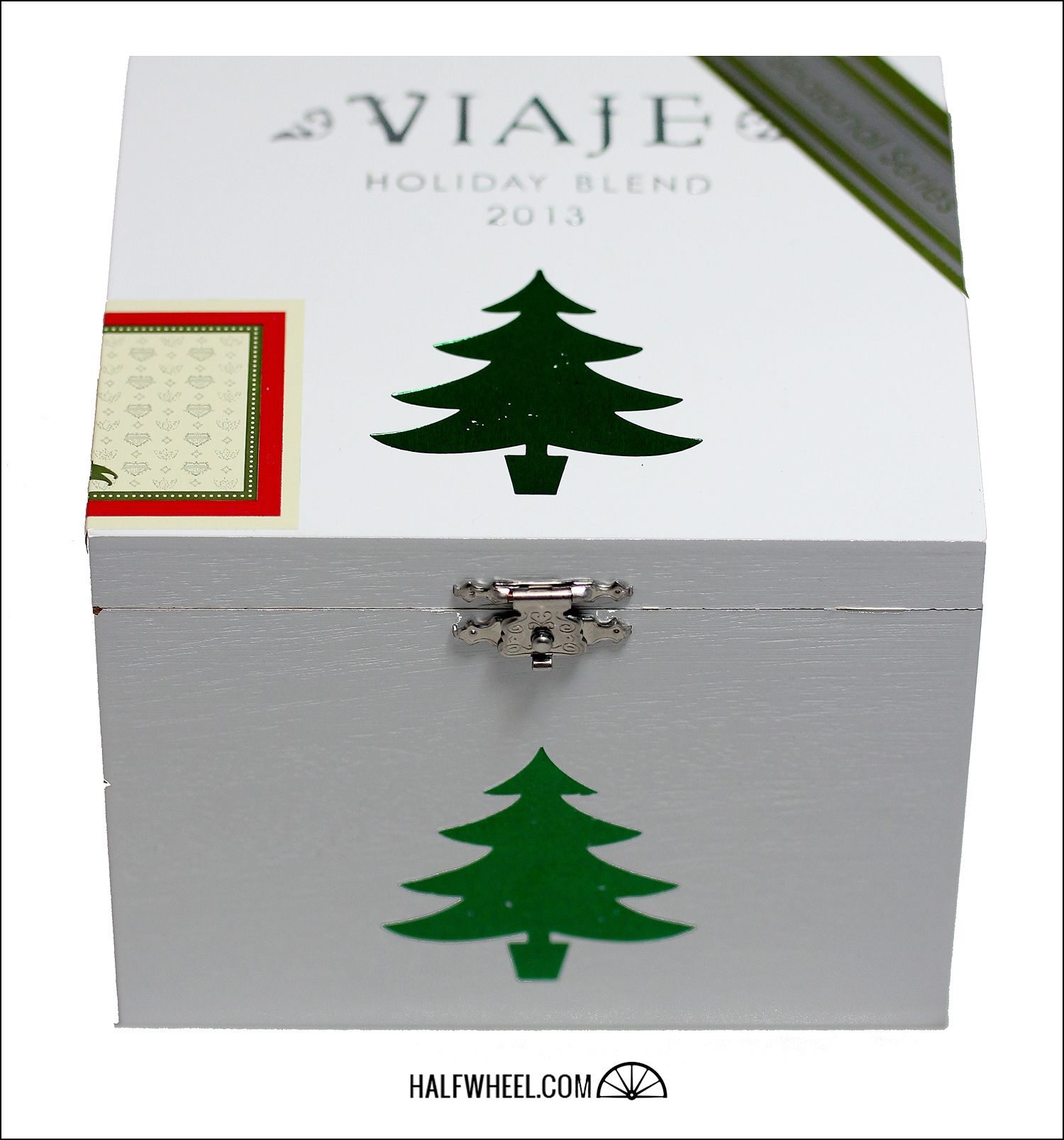 The Viaje Holiday Blend Christmas Tree is a short, stout Torpedo with a pointed and pronounced head. It’s a solid, well-built cigar that skews toward feeling a bit too firm, though some of the samples did have a bit of give. The wrapper is a medium leather brown with hardly a vein on it and no toothiness or oil, offering a smooth, almost velvet-like feel. Neither the cold draw or pre-light aroma provide many clues as to what to expect from the cigar: the foot presents a fairly neutral aroma with a touch of sweet wheat, while air moves easily on the cold draw and carrying that same neutral tobacco and wheat taste with just a touch of sweetness and no spice or pepper.

For not tipping its hand before being lit up, the Viaje Holiday Blend Christmas Tree kicks off with a big start both on the palate and in the nose as soon as the flame hits the foot. A sweet, syrupy molasses note hits the taste buds, backed by notes of woody, dry cedar and a solid amount of pepper in the nose. With such a short cigar the burn line moves fairly quickly and transitions seem to come and go in a matter of just a few puffs; while the pepper remains largely a constant, there are touches of coffee beans and sweet, spicy cedar that come through as secondary notes. Given its short length, it’s hard to divide this up into proper thirds, but by the time the first inch has been burned through, it’s clear that as with many Viaje releases, pepper is going to be the leading note in the Christmas Tree. The Nicaraguan criollo wrapper that has been used in several projects really sings here and reinforces its place as one of key components in the company’s better cigars. By the midway point—and assuming you haven’t knocked it off yet—you might begin to get the feeling that the ash on Viaje Holiday Blend Christmas Tree is pretty solid. It’s a tight, dark gray and doesn’t seem to want to go anywhere. The pepper notes continue to drive the Viaje Holiday Blend Christmas Tree, though it certainly isn’t a one-trick pony. The coffee bean and wood notes continue to intermingle in the background, while the sweetness is playing a less prominent role than it did earlier. The technical performance of the cigar has been more than admirable, never requiring a touchup and the ash holding on very well, in fact perfectly in two instances. Even if you don’t smoke at a quick rate, it is surprising how quickly the cigar burns, as its natural conclusion comes around fairly quickly and the cigar becomes hard to keep in the fingers without the assistance of a draw poker or similar implement. Update (January 8, 2014) — A Viaje representative confirmed the total production of this cigar and the review has been updated accordingly.

While the Viaje Holiday Blend hasn't been a must-buy cigar for me, I do think it is one of the company's better offerings and its performance has been noted in the several reviews we have done on the line since 2009's release. If anything, my only real gripe with the Christmas Tree release is the vitola, simply because the short, chubby vitola doesn't really work for me. While I tend to favor a bit longer, slimmer cigar, had the Christmas Tree's torpedo head not been so tapered and--for me--hard to hold in the mouth,  That said, the Viaje Holiday Blend Christmas Tree is still a very enjoyable cigar that fans of peppery cigars that also offer complexity should certainly find favorable.