Several years ago the Viaje Holiday Blend Candy Cane was talked about however multiple delays caused this cigar to be pushed back until this year. We talked about this in a few news stories last month. Patrick had this to say:

On Monday afternoon, Andre Farkas of Viaje showed off the new Candy Cane cigar that will be part of  the company’s 2012 Holiday Blend release.
In the accompanying comments on the photo, Farkas said that he started working on the Candy Cane several years ago, and that “delay after delay killed the project last year. After numerous setbacks, Im happy to say it has finally arrived.(sic)” The Candy Cane was discussed at the 2011 IPCPR convention as a release for that year’s Holiday Blends, before it became apparent that the cigar would not be making an appearance at retail.
No specifics about the cigar were released, though it is clearly a dual-wrapper barber pole that comes wrapped in a candy cane striped foil wrapper, seemingly similar to the Honey & Hand Grenades. Also visible in the background is the 2012 Holiday Blend, again with no details on that cigar released at this point.
It is the second picture of the Candy Cane project to emerge in the past two weeks, with Farkas posting a picture of the Candy Cane box on November 15.

Here is the image of the box that was posted to Facebook on November 15th: Viaje introduced the Holiday Blend in 2009 in a single 5 x 54 size. Since then, the company has released two vitolas of the cigar each year. This makes the 2012 Holiday Blend and Holiday Blend Candy Cane the eighth and ninth releases of the series. Even though the first thing most people will notice about the Viaje Candy Cane is the barber pole style wrapper the first thing that stood out most to me is the white Candy Cane label. The wrapper however is impressively applied with the seams only being visible simply for the fact that there are two different colored wrappers. There are a couple of visible veins but overall the cigar has a smooth and ever so slightly oily wrapper. Squeezing the cigar reveals very little give overall. The cold draw is slightly hindered by the covered foot but I still was able to detect some cinnamon, cocoa powder, and light hay notes.

The first third begins with an overall sweet profile including some of the previously stated cinnamon, milk chocolate, and a bit of lemon and fruity undertones dancing around in the background. Having some sweetness is a bit of a relief because a cigar named “Candy Cane” should have a certain level of sweetness to it. The draw has opened up perfectly after the covered foot has burned off and the burn line is wonderful not needing any touch ups. Smoke production is significant with the cigar continuing to billow smoke long after the draw. I don’t know if it’s the placebo effect of the name or if I’m actually tasting it but the second third has developed a fantastically fitting new flavor – peppermint. It’s not strong though and definitely takes a backseat to the sweet chocolate and cinnamon that are still dominating the rest of the notes. The burn has needed a slight touch up here and there but otherwise is still performing great. Overall construction is impressive with the brownish dirty gray ash holding on to nearly an inch. The flavor profile stays fairly consistent without much change throughout this part with the chocolate and cinnamon dominating while the peppermint and lemon zest notes continue on in the background. All of a sudden the final third turned noticeably harsh and unpleasant masking much of the enjoyable flavors from earlier. The burn has gone slightly uneven as well with one half burning much quicker than the other requiring frequent touch ups. On the good side it continues to burn cool, even until the end. 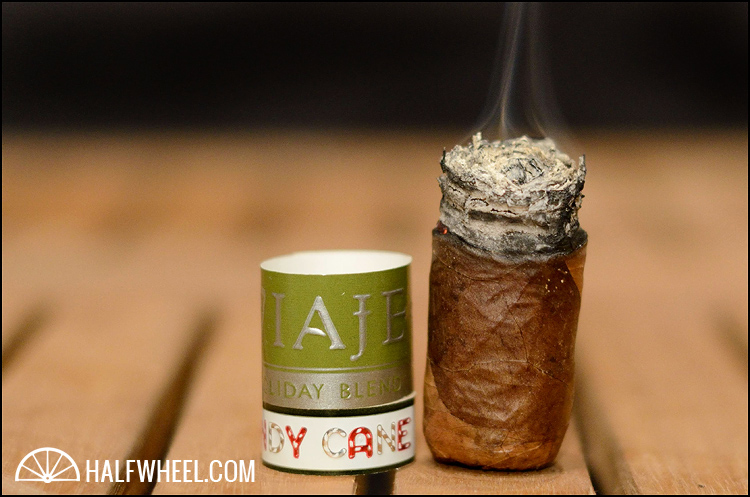 It’s always hard for me to score cigars that are enjoyable for two thirds and then just turns into a mess in the final third. The flavors in the first two thirds were enjoyable, smooth, and matched the naming of the cigar perfectly. The theme and outcome make it a great cigar to either enjoy yourself or gift out around the holidays. With it changing to the opposite of enjoyable at the end though it leaves a literal bad taste in your mouth, tarnishing my memory of the cigar. Time may change how this cigar smokes, but for now it falls short in my opinion. Finding them will probably be hard to near impossible with such a small release, so if you can find some I can easily suggest picking up two or three to try for yourself but limit yourself to that. Hopefully your experience is better than mine.