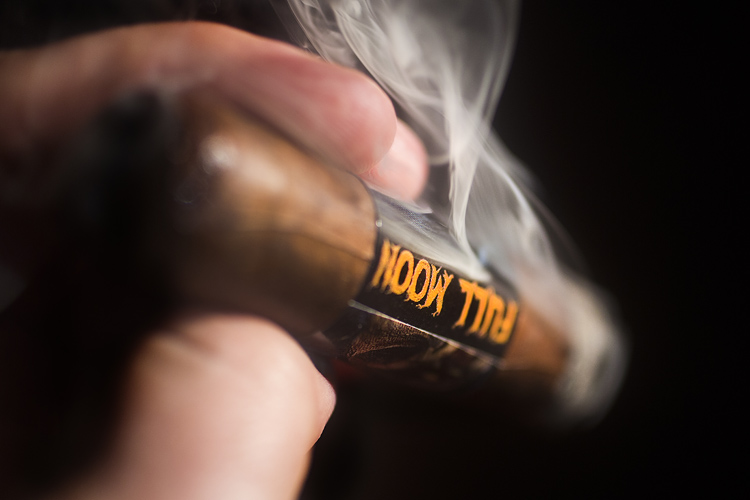 When we asked Viaje’s Andre Farkas about this year’s Skull and Bones M?stery—a release that has seen glow-in-the-dark boxes for Halloween—he said the company had something completely different planned for the October holiday.

Full Moon 2013, as the box would indicate, is a single 5 x 58 cigar that would be the grander project Farkas described. We detailed the release and the coinciding events in a news post on October 7:

Today, Viaje announced Full Moon, a project associated with two events with the company’s founder and head, Andre Farkas. A post on Facebook indicated that Full Moon would be happening later this month, alongside Viaje’s annual October shipment of Skull and Bones M?stery. The two events will be at Maxamar’s Ultimate Cigars in Orange, Calif. and Riverside Cigar Shop & Lounge in Jefferson, Ind., taking place on October 24 and 26 respectively.

While details are still predictably slim, Farkas told halfwheel that he had something completely different planned to coincide with the shipment of Skull and Bones for the October release.

The cigar is said to be a 5 x 58 vitola and described as full-body.

This is hardly the first Viaje release to coincide with an event. The Viaje Exclusivo Corona Gorda, Potato Masher, Super Lance and Special Sauce have all been passed out at events, while Viaje’s Zombie release has usually coincided with a visit from Farkas to each of the stores to receive the release.

There were more details to be had, much more. Retailers received multiple Full Moon bundles, wrapped in orange paper, but only one display box. The display boxes are a rather large wooden circle with “Full Moon 2013” written on them, a seemingly obvious indication there might be a 2014 version coming. 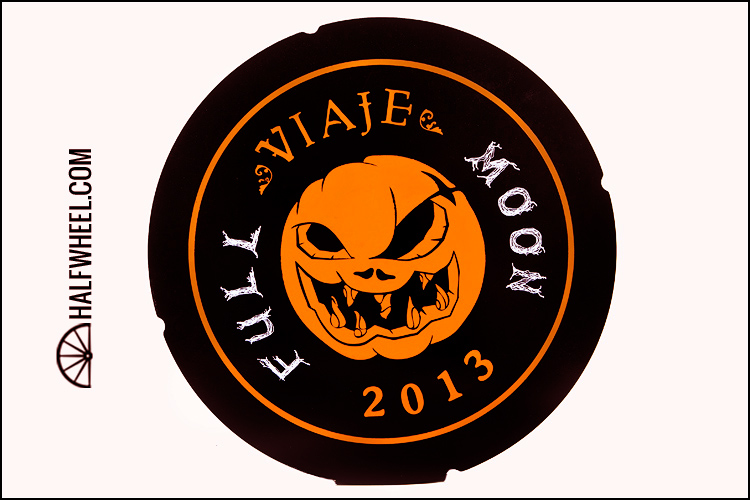 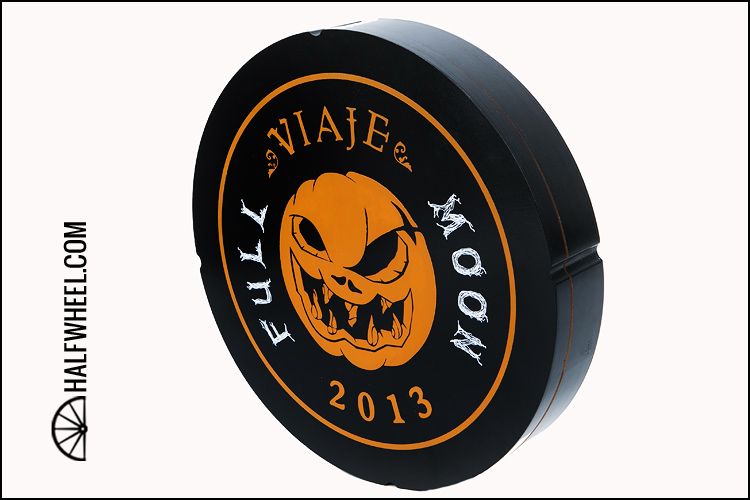 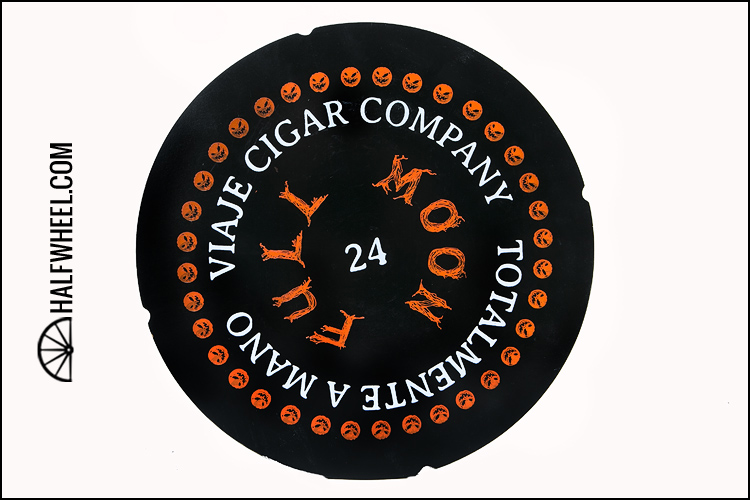 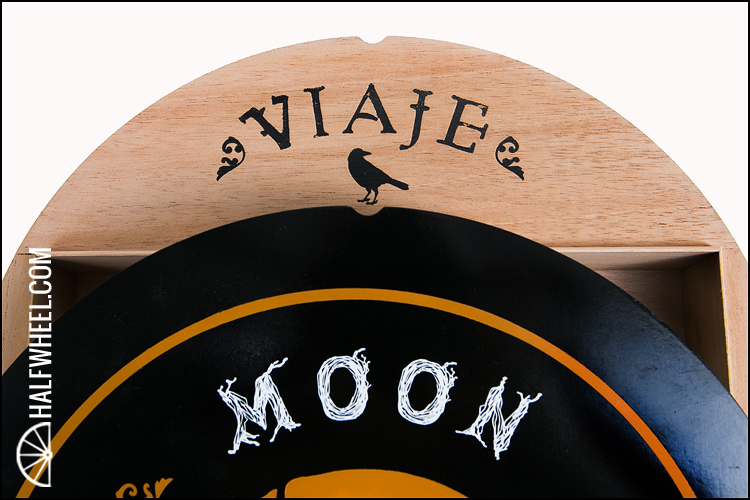 It should be noted, the cigars are sold in bundles of 24. Viaje invoiced the retailers for the boxes, listed as “Full Moon display box” separately. The price of the orange paper bundles is $274, while the display box was billed to retailers at $30.

While there is only one blend, each bundle actually comes with cigars wrapped in two different bands: one reads, “Viaje” and the other says, “Full Moon.”

Interestingly, if you take both bands off and put them together, a panoramic scene is revealed with the names on either end and the pumpkin logo connecting in the middle. 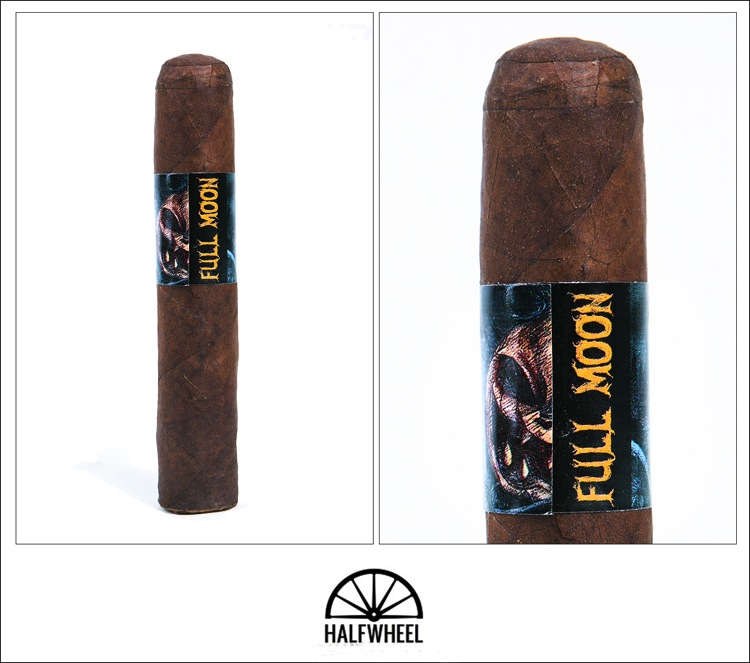 The Viaje Full Moon is a dense cigar, covered with a coffee bean brown wrapper that is silky smooth to the touch and devoid of both veins and oil. It feels almost too heavy, like it is overfilled, and the overt resistance when it is squeezed bears seems to bear this out. The aroma coming off of the wrapper is a combination of faint grass, tobacco, coffee and pepper.

It starts off with flavors of sweet tobacco, leather, barnyard, espresso and cocoa. There is a huge black pepper note on the retrohale up front, but it begins to recede almost immediately, albeit ending up fairly strong through the end of the first third. I am tasting some general sweetness that comes and goes, almost marzipan like, but it is not strong enough to distinguish as of yet. Smoke production is astounding, pouring out like a house on fire, dense and white. The draw is extremely open at this point—albeit smokable—but the burn is razor sharp so far. Strength-wise, the Full Moon easily hits the medium mark by the end of the first third, but does not seem to be increasing very quickly. 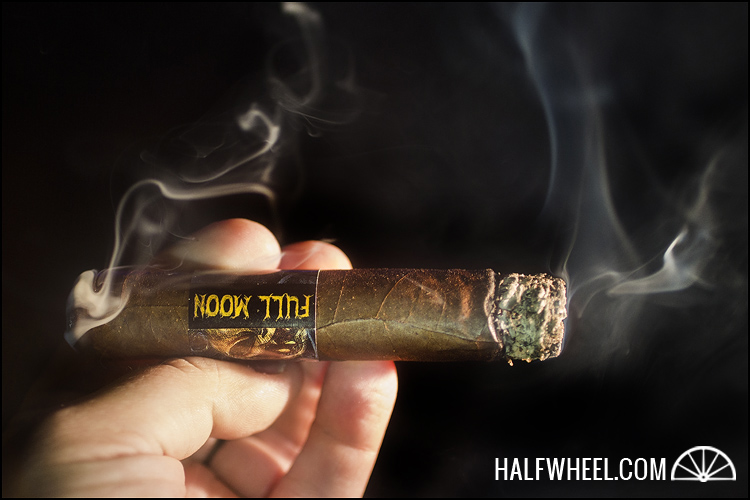 The burn becomes a bit uneven in the second third of the Viaje Full Moon, forcing me to touch it up a few times, while the draw is still way too loose for my tastes. The faint sweetness from the first third has come to the forefront of the profile with force, and is quite marzipan like. Other flavors flit in and out: bitter espresso, creamy cedar, leather and earth. There is a bit of a toastiness in the profile that I noticed every once in a while, but it does not stick around at this point. The smoke production is still humongous and while the strength has increased, it is still well short of the full mark. 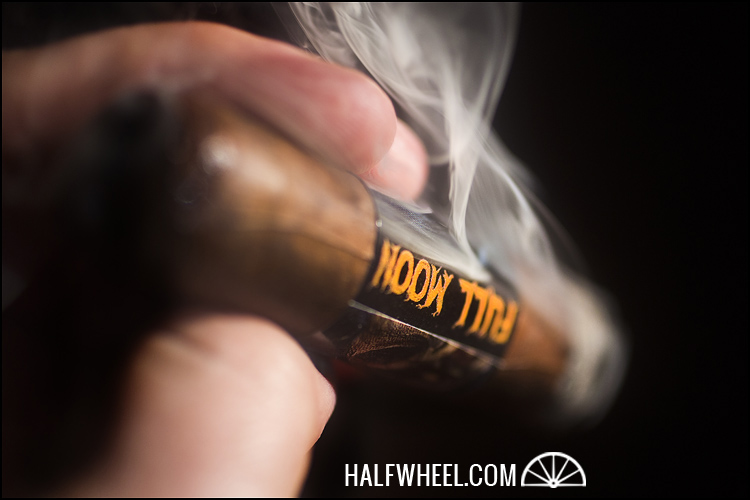 Quite a few of the same flavors—including leather, creamy cedar, earth and coffee—are around in the final third of the Full Moon, while the bready toast note increases as the cigar burns to the end. The marzipan sweetness recedes a bit from its peak in the second third, but there is still plenty remaining to affect the rest of the profile. There is still a nice amount of black pepper on the retrohale, but it has mellowed out noticeably compared the first third. The main difference is the strength, which takes a sharp turn towards the full category close to the start of the final third and continues increasing until it is well past the full mark. Construction-wise, the draw has sadly not tightened up at all, while the burn is unremarkable. 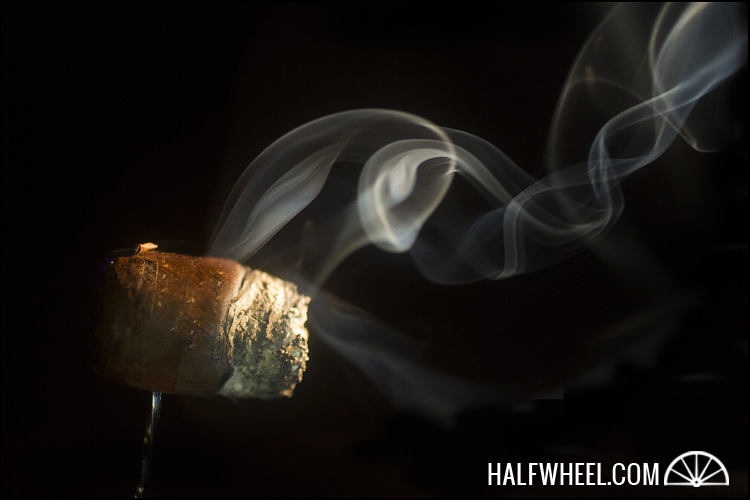 I was quite interested to see what Farkas had up his sleeve for one of his few new blends of 2013, and while the Viaje Full Moon was not a home run by and means, it was certainly a memorable addition to the brand. More approachable than the Skull and Bones M?stery and quite a bit more complex than many other Viajes, Full Moon has enough nuanced flavors of in the profile to satisfy. The marketing is quite memorable, and the bands—while equal parts campy and tacky—are well done. Still not a cigar I would run out and buy a bundle, but definitely one of Viaje's better releases for me this year.