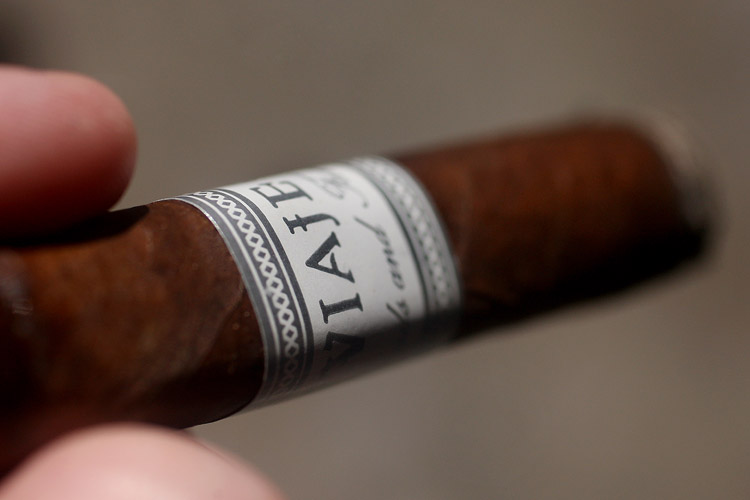 Last week, Viaje began shipping the long-awaited WLP Winter Classic and Super Shot 10. In addition, numerous retailers indicated that they were being sent a single box of Viaje Friends and Family. Even now, nearly a week after we broke the story and retailers began receiving boxes, there is almost nothing known about the latest Viaje. Charlie Minato explained the background of Friends and Family last week:

At IPCPR 2011, select individuals were handed a special blend from Andre Farkas, Viaje Friends and Family. The cigar has never publicly been shown off and nearly nothing is known about it, but a few retailers have indicated that they will be receiving a single box of Friends and Family in their upcoming shipment alongside WLP Winter Classic and Super Shot 10.
While the blend is still unknown, a hesitant Andre Farkas explained in Las Vegas that it was like his Cohiba. A reference to the famed Cuban brand that was originally created as a personal blend for Fidel Castro that was given to friends and diplomats before becoming a commercially available blend in 1984.
This is the second time that Farkas has created a personal blend for private consumption. The Viaje War Hammer was created for the consumption of the Viaje Office, although Farkas has given them out at least one event.
Currently, there has been zero indication that the War Hammer will be released for sale, which wasn’t always the case with Friends and Family.

While Viaje normally releases cigars in 20 or 25 count boxes, Friends and Family is packed in boxes of 15 cigars. The size is a 7 x 48 box-pressed churchill, which is consistent with what was at IPCPR 2011. Here is what the Viaje Friends and Family boxes look like: 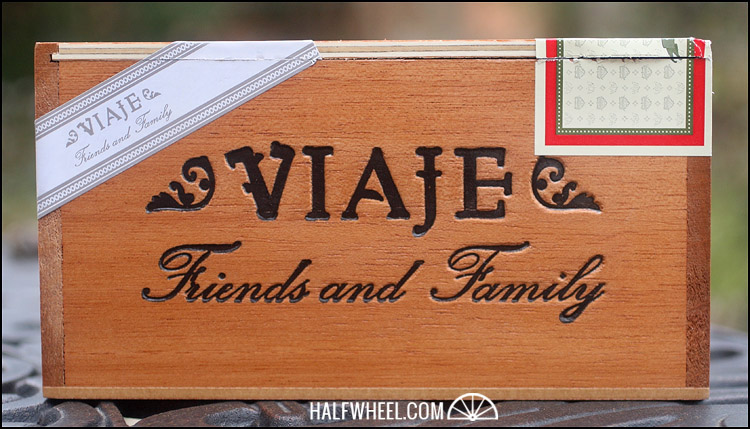 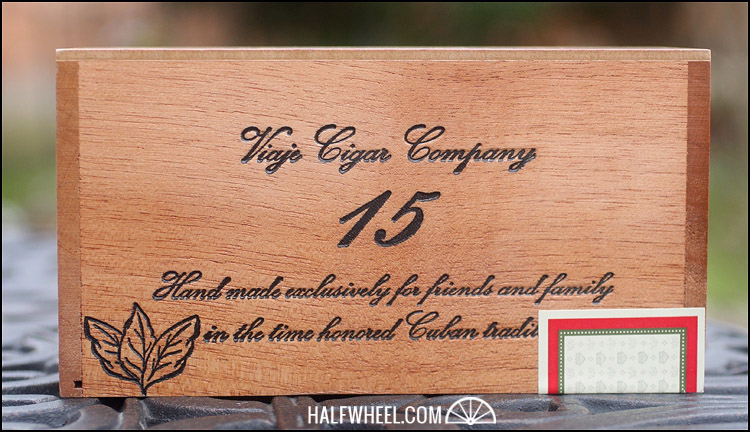 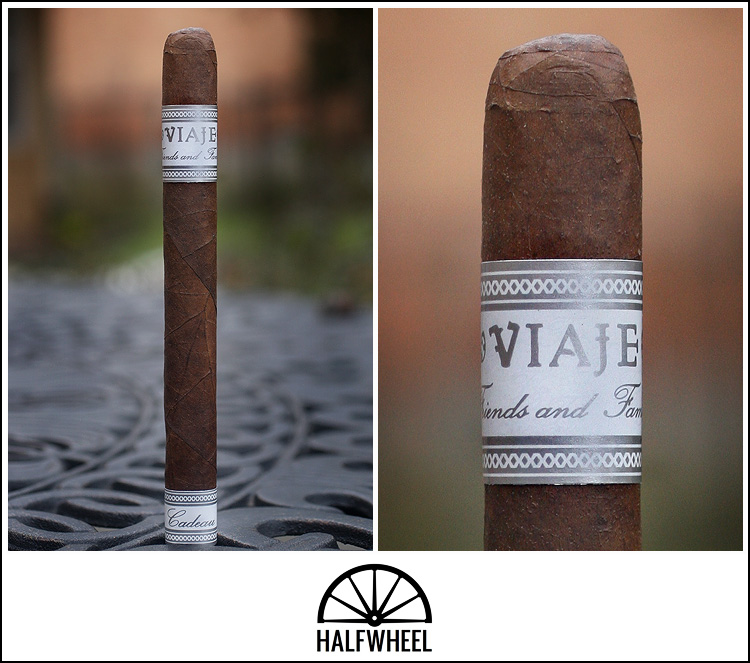 The Viaje Friends and Family is a great looking cigar, with a noticeable box press, and covered foot. It features two different bands with silver type on white background. The one near the cap reads, Viaje Friends and Family and the foot band says, Cadeau. The wrapper is a wonderful mocha chocolate brown, smooth to the touch and smells strongly of barnyard, hay, coffee and sweet chocolate. It has the perfect amount of give when squeezed, but seems quite heavy in the hand for the size.

The first third of the Viaje Friends and Family opens with a dark and gritty profile. It has strong flavors of espresso, dark chocolate, leather, earth and the perfect amount of spice on the tongue. There is some black pepper on the retrohale that comes and goes, but there is also a wonderful caramel-like sweetness underneath the other flavors that is really quite wonderful. Construction, draw and burn are perfect so far with the ash holding on for more than an inch before letting go. Strength is medium at best, but does seem to be picking up. 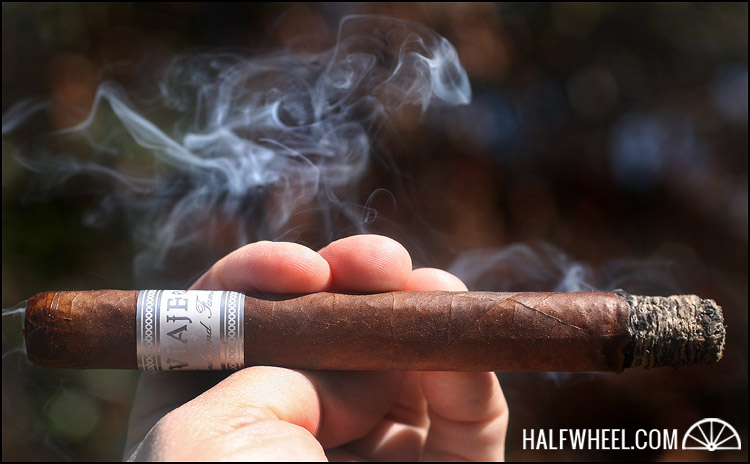 Moving into the second third of the Friends and Family and the spice that I am getting on my tongue really picks up. The flavors change up a bit with a dark and sweetish chocolate nougat note becoming dominant, but the earth, espresso and leather are still very much present. Construction, burn and draw remain amazing and there is quite a bit of smoke coming from the cigar which is a nice change. The only odd thing about the construction is the burn rate, which seems a bit slow. Strength is right at the border of full, but not quite there yet. 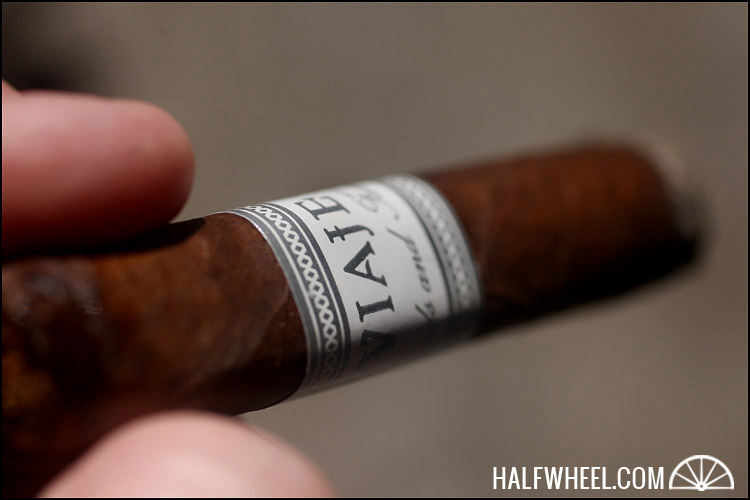 Coming into the final third of the Viaje, and the spice dies down a bit, although it’s still very noticeable, and the dominant flavor shifts again. This time the Friends and Family becomes more of a fruity sweetness that I could not place, although if pressed, I would probably say plum. The earthiness is still present, but diminished compared to the first two thirds, but the espresso and leather notes are a bit stronger. Strength of the Viaje does not increase from the level of the second third and the construction remains amazing until the end. 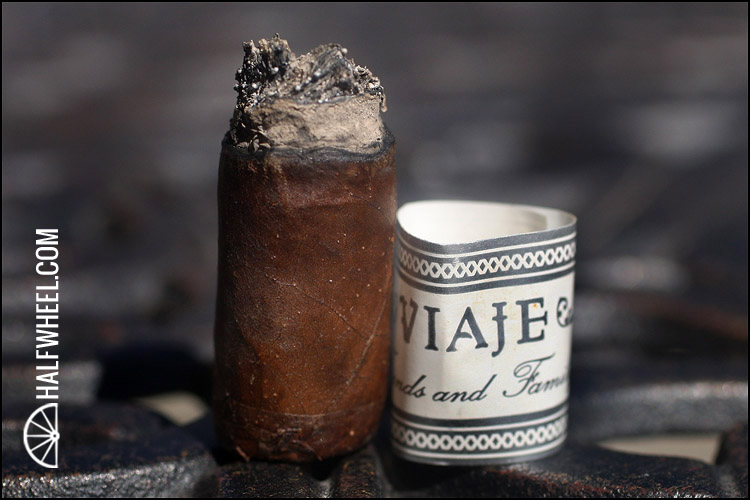 Everything about this release seemed to click with me. I love the vitola (although I do wish it was a lonsdale instead of a churchill), the box-press, the dark, earthy and gritty profile, and the sweetness that is prevalent throughout the smoke which makes the whole profile that much more complex. In addition, construction was amazing with absolutely no issues at all for the entire smoke. While the strength hovered around the full mark, it never pushed over, giving it just enough kick to enjoy without feeling like you were hit with a sledgehammer after finishing it. The main problem with this release is the same with most of Viaje's releases, only magnified. It seems likely that at most, each Viaje account got a box, which means there's a little over 1,500 cigars released. Yet unlike a normal Viaje limited edition, it seems like some retailers are never going to even offer these for sale. Having said that, the Viaje Friends and Family is an all around great cigar, easily one of Viaje's best, and I feel lucky to have tried it and I wish I had more.