In a never ending quest to conquer the summer cigar market, last year Viaje added a new cigar to their mid-year releases, a uniquely shaped cigar with a triple cap on both the head and foot and named for a popular and highly-charged explosive: the Viaje C-4. The cigar joined an existing lineup of the Summerfest and TNT, a 6 1/2 x 54 Double Robusto with a long pigtail designed to look like a fuse.

Like most annual releases from Viaje, not much has changed from the 2011 edition, which Brooks reviewed here. The cigars are packed in 75–count industrial-looking crates with stenciled writing, and the band is once again placed in the middle of the cigar with just the name of the cigar printed on it. There’s no mention of Viaje on the cigar, just on the box in the form of Viaje Demolition Co. The C-4 was the second Viaje cigar to feature triple capped ends, with the first being the 2011 Zombie. Like the recently released 2012 Zombie, the capped foot now has a pinhole in it, an addition designed to help rid the cigar of some of the moisture that it accumulates during the manufacturing process. Criticism of overly wet C-4s and Zombies was fairly prevalent in 2011, so Farkas and the team at Raíces Cubanas thought the pinhole would help alleviate that problem. Farkas told me that the pinhole helps the cigar breathe and allows the excess moisture to escape, although not enough of it escaped to prevent burn problems with the 2012 Zombie. He added that the idea of a double-capped cigar is so new that they are still learning about the particulars of such a stick. The Viaje C-4 has one of the more interesting shapes for a cigar – an extreme box press with a capped head and foot. Minimal veins and oils really compress the look of this cigar and the matted brown color doesn’t help. The pre-light aroma shows wheat toast and a note that varies in my mind between a steak with A-1 Steak Sauce or HP Brown Sauce. Even with the foot cap in place, the cold draw remains surprisingly agreeable, with a meaty note that has just a bit of spice that lands on the tongue. What I had originally noted as a bit of a flavor tinge in the cold draw seems to be a repeat of that steak sauce note. It’s not sour or bitter, but if you think of the flavor sensation from eating A-1 straight, you get the picture.

As the Viaje C-4 is being lit, the pinhole provides an escape valve for the smoke to come out of, providing a visual not seen in many cigars. The initial puffs of the first third are surprisingly meaty but only one of the three cigars offers much in the way of pepper or spice, despite smoking through the closed foot cap which has generally added quite a punch to Viaje offerings. It takes about 10 puffs before the pepper really starts to kick in, ramping up quickly before backing off and returning soon thereafter. The ash in the first third is a dirty gray that is surprisingly strong and the foot cap stays attached, something I recall having a bit of an issue with when smoking the Zombie. Burn line problems start to emerge within the first inch and a half, as things get off track and the infamous cigar mustache starts to appear. Towards the end of the second third of the first cigar, an unburnt patch of wrapper leaf clings to the ash, a wart of unburnt tobacco that showed up again in both of the other cigars smoked. This blemish is a detriment to what has been an enjoyable cigar to this point, as it leads to questioning the care of the leaf in the fermenting and aging processes. Sharp pepper notes return but hit more in the back of the throat, causing an irritation more than a pleasant palate sensation. 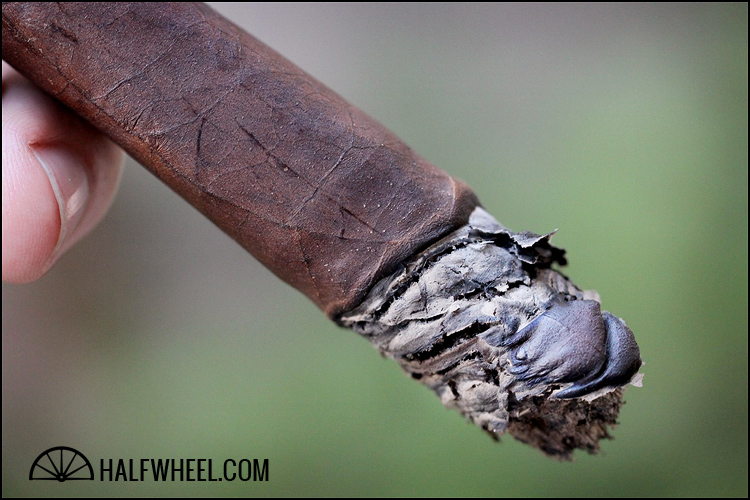 Despite some burn problems in the transition to the final third, the pepper and nicotine kick up a notch or two and deliver the explosiveness that would seem fitting for a cigar called the C-4. There’s a leathery, chewy texture that starts to emerge as the Viaje C-4 is starting to show some honest flavors for the first time. The heat also picks up a bit in the final inches, getting almost too hot to hold in my fingers, which is a shame because a bit of sweetness started to emerge in the final two inches and provide a balance to the pepper and spice that had been dominating the cigar. 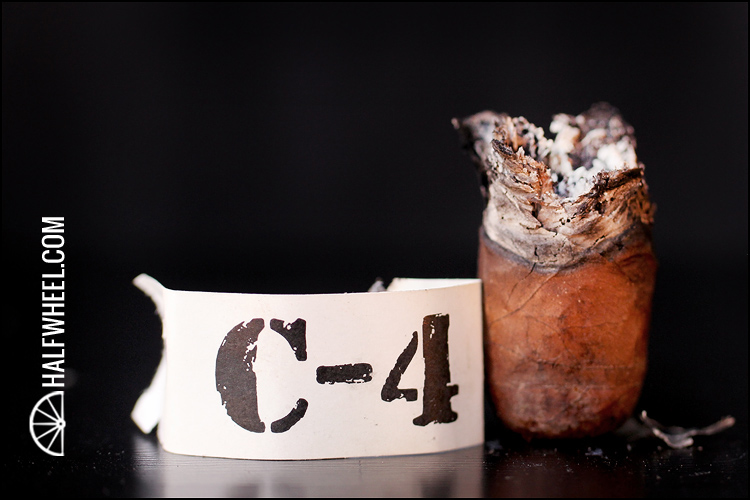 The Viaje C-4 is a good cigar for the moment, although I don't think it's something I'd run out and buy a bunch of to age. While I'd be interested to see how the spice and pepper mellow in six months or a year, I don't think the mellowing of those two components would allow other flavors to come out and redefine the profile of the cigar. I could be wrong, but I don't think I'll hedge my bet with a few in the humidor.