Last year Janny García of My Father and Patricia and Raquel Quesada of SAG Imports/Quesada announced a joint project, Tres Reynas. While the cigar was limited, it was announced earlier the line would return. Patrick covered the history behind the cigar last year:

Following up on the news of Tres Reynas, a new collaborative project between the Quesada and García families, Patricia and Raquel Quesada shared some more details about the cigar and its origins.
The name Tres Reynas, which means Three Queens, wasn’t the first choice. The project was originally slated to be called Tres Hermanas, or Three Sisters, “because that is the relationship we have with Janny” the Quesada sisters said. In researching the availability of the name, it was decided that it was too similar to a cigar already on the market. While they did not go into which cigar the name was too close to, there are a pair of cigars that could have presented the obstacle. Casa Fernandez and Tropical Tobacco make a cigar called Los Hermanos, and the New Orleans Cigar Factory produces a cigar called Tres Hermanos.

When asked if the name ‘Three Queens’ might be seen as a bit boastful, especially considering that both their parents and Janny’s parents are alive and very active in the cigar industry, the Quesada sisters responded that “the name is not to be taken so literally…of course we do not think of ourselves as actual queens but rather wanted a name that would simply represent us as strong independent women in the industry that is dominated mostly by men.”As reported by Cigar Aficionado, the Tres Reynas cigars will be produced at My Father Cigars S.A. in Esteli, Nicaragua, but distribution will be handled by the Quesada family’s SAG Imports. “That’s just the way we approached it from the beginning,” said the Quesadas.
The three women came to be friends approximately two years ago when Raquel met Janny at the Nicaraguan Cigar Festival and “we just clicked,” Raquel said.  ”A few months later we all got together with Patricia as well and we’ve all been friends ever since.  It’s hard to explain.  Sometimes you just meet a person that you immediately get along with and become close in a way that would normally take much longer to develop.”
Could this project be the first of several projects between the two families and their companies? “We are taking it one step at a time but we will certainly look to do future projects together again in the future.”
The Tres Reynas cigars will debut at the upcoming IPCPR convention and trade show and will be available in three sizes: a 6 x 60 Gordo, a 6 x 54 Torpedo and 5 x 50 Robusto. The cigars will consist of Nicaraguan filler and binder with a dark Connecticut Broadleaf wrapper. Only 1,000 boxes of each size are being made, with prices between $7-8 per cigar.

Two changes were made for the 2013 release, the bands changed to black and a Corona size was added. The four sizes are:

For a consecutive year, there will be 1,000 boxes of each size. 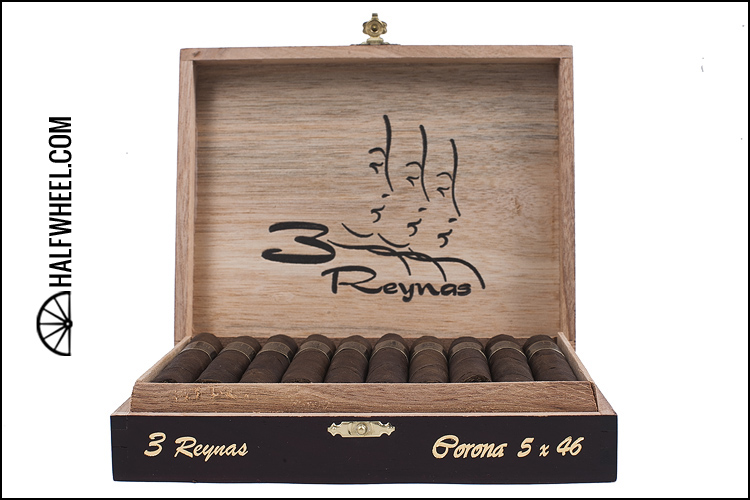 Out of the cellophane, the Tres Reynas has a great fruity aroma. There’s strong notes of leather, cranberry and pepper. The wrapper itself has a chocolate note to it, definitely not the darkest of the tobacco that comes from My Father, but the factory’s traditional triple cap is ever present and the band contrast is great. From the cold draw I get a mixture of leather, sweet sugar, pepper and some mint. It’s smooth, full and complex. On one occasion there was a prominent cherry note and most featured some sort of dry earth, but all were enjoyable.

Unfortunately, the first third of the Tres Reynas Corona is harsh. It happens each of the five times I smoked the cigar, the first minute or two were just difficult. There’s some barnyard, but it’s mainly a harsh pepper and tobacco mixture that almost makes me want to stop. What I learned is that it pays off to keep smoking as the cocoa, earth, berry and grassy notes emerge shortly, detailed and pretty full. The pepper is still there, fading and smoothing out, which is a good thing. Strength-wise it’s on the lighter end of medium-full with a body that compliments that nicotine level well. While the first third’s construction was largely flawless absent an open draw, the second third seemed to find some way to require some attention. Occasionally the burn went a bit off, once the smoke production went from its heavy level to near non-existent and the pictures don’t show the prettiest ash. Annoyances aside, the flavor is still good: cocoa, pepper and coffee. The grassiness fades a bit, which is a welcome change, but I definitely would have welcomed another flavor. As the final third begins, the Tres Reynas definitely gets a tad bit hotter. After slowing down my pace slightly, the problem seems less threatening to the coffee, pepper and earth notes that remain. I’d say the Corona is medium-full in flavor throughout the first two thirds, medium-plus in the final third with a body and strength level that was consistent from the first third. Let's get this out of the way first. We've had these cigars for a few weeks, and while it is still early, I liked the 2012 version better when they were fresh. For me, the Tres Reynas Corona suffers because of the portfolios of both My Father and SAG Imports. This is a decent cigar that has a lot of good qualities, there are just a few issues and no real defining unique aspect that would make me pick this over another cigar from the Garcías or Quesadas. The price point is a gigantic breath of fresh air, but there are a lot of cigars the two companies have that I'd pay a dollar or two more.