Pricing is set at $8.05 per cigar with the cigars sold in boxes of 48. The Cedro No.5 is the first of three new sizes for the Tortuga 215 Reserva line, the other two vitolas are still being finalized, although scheduled to be released in the spring. The three new sizes will be distinguished by the inclusion of a cedar wrap as well as the fact that they are round as opposed to being box-pressed.

According to brand owner Victor Vitale, the Tortuga 215 Reserva Cedro No.5 will be shipped to retailers on December 9, 2013.

The boxes of the Tortuga 215 Reserva Cedro No.5 look like this: With the addition of the Cedro No.5, the line now sits at five confirmed vitolas with two future sizes planned:

There is also a regular Tortuga line with six sizes. It’s a Dominican-made cigar completely different from the Nicaraguan puro Reserva. 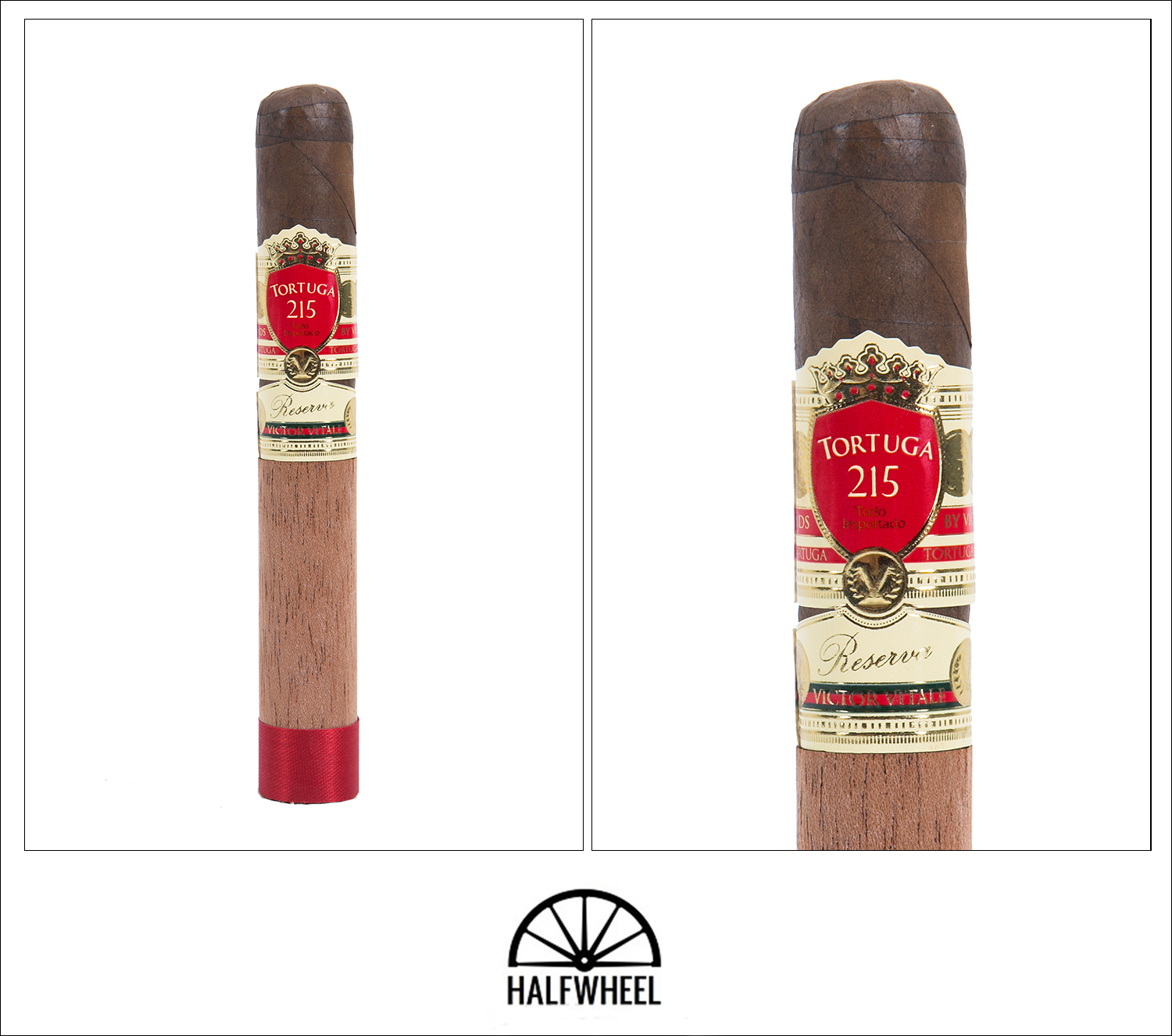 The presentation is nice, a little busy, but it works. Removing the cigar from cedar is a task that wasn’t as easy as it should have been. Even in our low RH humidor for over a week, one example saw the Cedro No.5 force me to break the cedar rather than sliding it off. It was at that point that I also noticed the cigar was very squishy. Given that it was not consistent throughout, my guess is a filling problem, rather than a humidity problem. If it is a humidity problem, it’s bad news for Vitale, because the cigars we had were nearly dry-boxed for a week and a half before being smoked. Fortunately, the cold draw is incredible. A rich candied orange note with a touch of blossom water hints and a bubble gum texture. It’s a sweet tooth heaven as far as traditional cigars go.

Despite the cold draw, the Cedro No.5 starts off with little sweetness. A deep cedar coats the palate, a bit of coffee bean on the finish and a light creaminess through the nose. An inch in and the Tortuga 215 Reserva is presenting great notes of nuttiness and mushroom with some cedar and soft nuttiness. Easily the most impressive feat is the smoke production, albeit not volume, I’m pretty sure I could have had a three-course meal in between puffs and I would have come back to a cigar that was still lit with a slightly open draw and slow moving smoke. Unfortunately, the Tortuga 215 Reserva softens out in the second third with the cedar note fading behind the creaminess. Herbal and toasty notes develop towards the end, but the profile has gone from medium plus to mild to medium. I get some butter as well, which might lead you to believe that this is a Connecticut profile, it’s not, even if it might be looking that way on paper. Smoke production is great, the draw remains good, although I touch-up a few times. The lack of filling is apparent in the final third, the cigar is becoming overly squishy in the mouth. Flavor-wise, the last quarter of the second third and the final third are hardly different. The Tortuga becomes milder, which is fine, but the flavors don’t develop in detail, which is frustrating. Tortuga was a brand I got excited for. While Jerry Cruz of Stogie Review and I don’t always see eye-to-eye, a lot of times when it comes to the less obvious cigars, we are on the same page. He loved the original Tortuga, I liked it. And that’s more than I can say about the Reserva Cedros. There is nothing wrong with the cigar, but outside of a few moments in the first half, it’s average at best. Despite what seemed like some obvious filling problems, the cigar is constructed wonderfully and burns on levels rarely seen, but flavor is the ultimate judge.