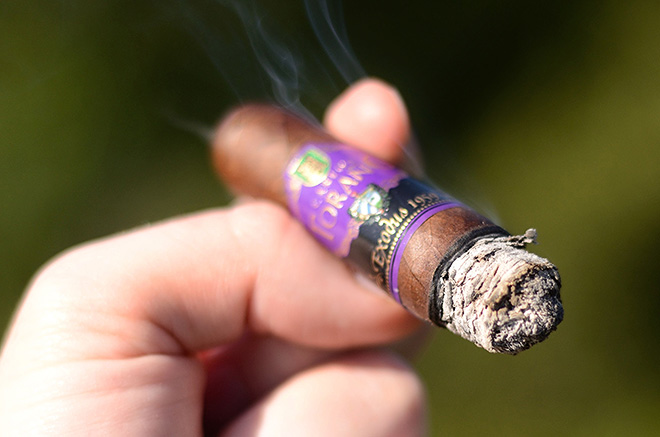 At the 2013 IPCPR trade show and convention, Toraño’s flagship cigar, Exodus 1959, saw its first new line in four years in the form of a limited edition called the Exodus Finite. Unlike the other three Exodus blends, the Finite is a Nicaraguan puro.

Announced the month before the trade show, the Exodus Finite was released at IPCPR 2013, though according to a representative from the company, it won’t be seen in stores until “mid-September.” Coming in three sizes, it will be the smallest selection of sizes in any of the Exodus offerings. The sizes are:

The Finite isn’t just another Exodus blend with a different wrapper either, considering it is a Nicaraguan puro, and the only other Exodus blend that has all Nicaraguan filler is the 50 Years blend. Bruce Lewis, Toraño’s vp of sales and marketing, explains the blend in more detail in the press release:

Although the wrapper and binder are both grown in Nicaragua’s Jalapa region, the wrapper is shade-grown viso and comes from a higher priming, whereas the binder is sun-grown seco and is among the first leaves picked. This blending gives the medium-bodied Finite its well-balanced character, one that hints of roasted nuts, complemented by a raisin-like sweetness. The finish is long and features a cedar note.

We got a picture of what the box will look like at IPCPR: 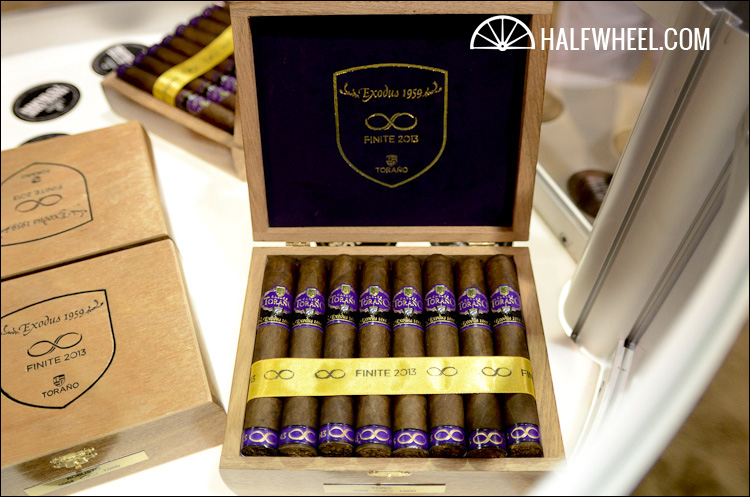 The first thing I think when I take a look at the Exodus Finite, is that it’s just a very pretty cigar. A deep chocolate colored wrapper gives an excellent contrast with the purple, black and gold bands. Running my fingers over the wrapper it feels only slightly rough with just a bit of an oily sheen. It’s applied well without any visible seams and there are only a couple of minor veins visible. Squeezing the cigar I don’t get much give, though there is the slightest of soft spots towards the foot. When I bring the cigar to my nose the wrapper gives off a pleasant and singular sweet tobacco note, though the foot’s aroma is more complex with notes of cocoa, dried fruits, and toast. The cold draw is a very interesting bouquet of flavors, including notes of dark cherry, vanilla, orange and a little spice on the end that gives it an almost cola-like profile.

Starting the first third I don’t get that interestingly specific cola profile, though many of the notes are still there. Dark cherry, vanilla and orange zest persist, but the spice from before is missing which gave it that cola-like taste. Not very far into the cigar there is a sweet cedar and nutty note that develops, adding nicely to the already interesting and complex profile. The light grey ash is striped with dark grey lines and gives it a pattern very reminiscent of a zebra. Holding well over an inch, the ash still wanted to hold strong when I rolled it off in the ashtray. Towards the end of this third the fruity profile has faded a little, while the cedar and nutty notes have increased in strength.

The second third of the Exodus Finite continues with the cedar and nutty notes dominating while a new minor note of hot cinnamon has developed. The construction is still proving to be excellent with the burn straight and ash holding on tight. The fruit notes that were so prominent to begin with have faded to almost nothing at this point, with mostly cedar, nuts and cinnamon making up the profile.

Moving into the final third the sweet cedar has turned into more of a dry cedar and the overall flavor has gone a little harsh. With the harshness, not many other flavors are detectable anymore and the cigar kind of flat lines. Construction-wise the Toraño was flawless to the very end however and I am able to smoke it until I can’t hold it anymore.

If I only smoked the first two inches of this cigar, the score would have been obscenely high. Complex, melding perfectly and intriguing, the initial flavors were so enjoyable that the subsequent quelling of flavors brought more disappointment than if the cigar had just been so-so to begin with. Construction on all of them were great, without a single touch up needed across all three samples. Despite the disappointment of the last part of the cigar, I still enjoyed this enough that I can easily recommend seeking these limited cigars out. I’d hesitate to suggest a full box, though I can say that you should definitely grab a fiver and see for yourself what you think of the cigar.