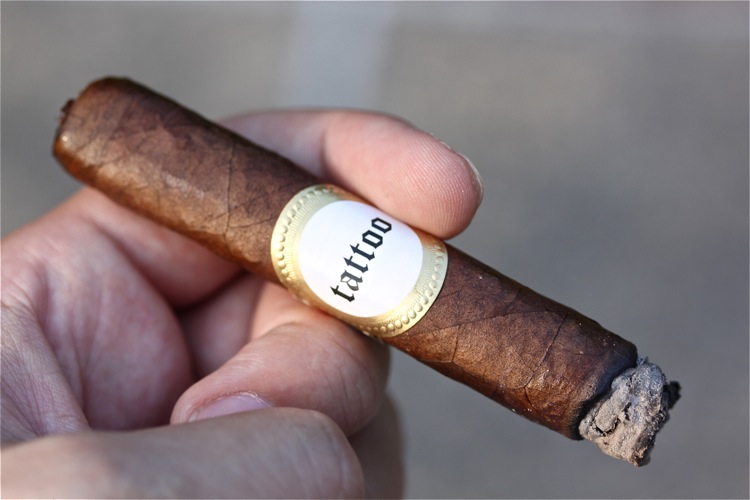 (You can read Brooks’ review here.)

Oh the Tatuaje Tattoo. Not exactly a shining moment in journalistic accuracy for el niño diablo, albeit, eventually Pete Johnson cleared everything up. I still remember the excitement I had when Jose Agosto, of Gloucester Street Cigar Co., told me about a box-pressed Broadleaf Lancero, an idea I literally had discussed as a possibility only a few days before. But, it wasn’t to be… Instead, Pete Johnson released a box-pressed El Laguito No. 1, which he described as the Tatuaje “Brown Label” Especiales with a Habano Rosado Oscuro wrapper. Today’s Smoke
Ironically, just yesterday Frank Herrera of CigarLaw posted some more info on the trademark dispute that inspired this cigar. As we mentioned in State of the Brand: Tatuaje, Nicaraguan Imports (Cuban Crafters) tried to register the trademark “Tattoo” for cigar related purposes. Pete Johnson objective given that Tatuaje translates into “tattoo” in Spanish. As part of his efforts to secure the trademark, Pete Johnson decided to release a cigar known as “Tattoo” annually. The first release was just over 5,000 cigars released to twenty Tatuaje accounts in the middle of March.

Unlike the Especiales, which uses the lightest wrapper of any Brown Label, the Habano Rosado Oscuro wrapper of the Tattoo is a rather dark leather note, with a bit of reds and heavy veins. Packing is loose, likely due to the box-pressed nature, which requires a bit less tobacco than a traditional roll, and it’s a bit soft to the touch. From the wrapper, I get a dry powdered cocoa note over leather and earth. This isn’t the best example of a clean box-press, but it is fairly good. The foot is much of the same with a powdered cocoa over a bark-like earth and quite a bit of pepper. Lighting
My v-cutters (yes plural) are still MIA, so for this particular rendition of the Tattoo it’s a straight cut via the Palió. As far as 38 RGs go, the v-cutter really shines on the Tattoo, which has a rectangular box-press, but there’s nothing wrong with the straight cut. After removing the cap, it’s an aroma of leather, caramel, cocoa and earth; dense and full, and rather reminiscent of your typical Oliva Serie V. The Tattoo’s cold draw is rather tight, flavors of leather, cocoa, caramel, earth and hints of sweet grass round out a relatively full profile. Toasting produces a warm dark toasty note with strong pines, cherry woods and some classic Tatuaje spice. The initial draw of the box-pressed Lancero is a tight start with dry powdered cocoa that transforms into pine and cocoa with toasty and cedar; full flavor and medium in length. First Third
The main flavor of the first third of the Tatuaje Tattoo is a neutral powdered cocoa with cedar and a touch of generic sweetness accompanying the interesting cocoa note to comprise of the full flavor. At times, a pepper completely overwhelms the flavor profile and stays fairly strong through the first third. The pepper and cocoa notes comprise of the finish, which is full and long, yet not very complex as it rather stagnate. Draw is tight and smoke production sits slightly below average with a spicy woody aroma, but things are moving. Second Third
A lot more flavor is present, although it seems to be more about the toning down of the cocoa and pepper that allows for earth and cedar to break through. It’s still full, but the powdered cocoa note has evened out with the rest of the flavor profile and the pepper is on a sharp decline. I’ve smoked three, one example of the Tattoo was start to finish a pepper monster, shockingly not very enjoyable, but the other two were pretty consistent. Finish is pepper up front developing into earth, cedar and herbs, full and a bit more complex than the initial. Of the three I’ve smoked, I’ve pulled nearly inch long stems out of two of them. Both times the draw was improved, as well as the flavor, but the cigar is rather tight as far as draws go. Strength is medium-full to full and fairly stable throughout, no complaints there. Final Third
I get a bit more herbs, but the flavor profile has lightened a bit. The powered cocoa that was the signature of the Tattoo at the beginning is now almost completely gone and a mixture of earth and cedar now dominate the flavor profile. Finish provides a bit more pepper, and is still full, oddly perhaps the most complex finish of the cigar. Burn is still a bit uneven, but the cigar remains lit with a slightly quicker puffing rate than normal, so I could care less. Getting close to two hours, the ashtray gets emptied and I head inside before a downpour of Carolina summer rain.

For the Novice
It’s too strong, not easy to find and likely a bit overwhelming as far as flavor goes. Another Tatuaje, another cigar just not for someone starting out. 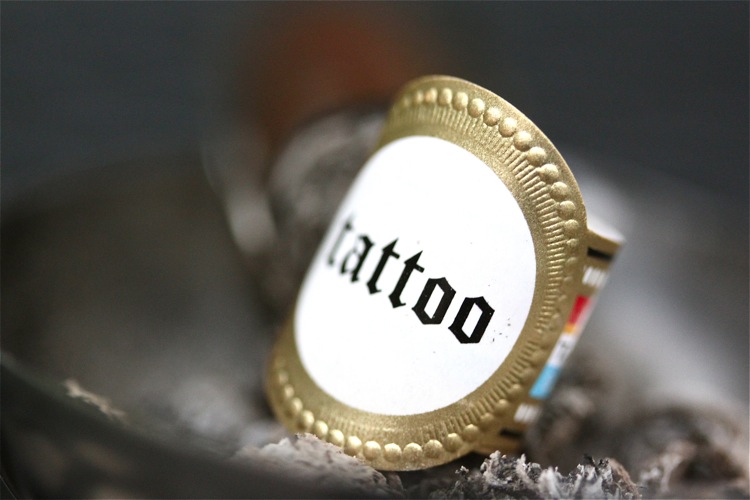 In the End
Reflecting on the Tatuaje Tattoo, nothing really comes to mind. The initial third of the cigar is a great start, what occurs for the remaining hour and a half is just not memorable. It’s not that the cigar is offensive, or bad, it’s just boring. Brooks speculated that perhaps this release was rushed, given the legal matters and the flavor profile, Pete replied explaining that this was far from a rushed release. Whatever the case, for better or for worse, the predictable nature of the Tatuaje Tattoo is not so memorable.

78. A bit disappointing in a lot of regards, hope next year’s Tattoo is better.