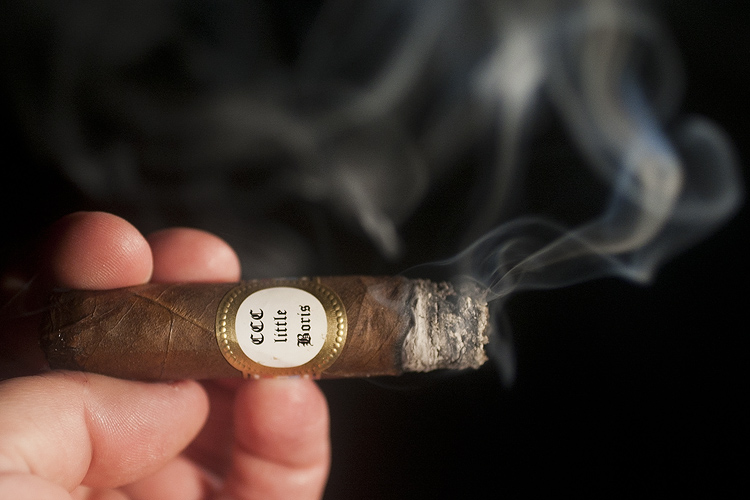 In 2008, Pete Johnson announced his first Monster Series release, The Frank, named after the movie monster of the 1931 classic film. After the fanfare that release attracted, Pete announced another release, the so called Actors Series, which was supposedly going to be another line, each one named after the film star that played in the monsters movies in the first place.

The first and only release in the Actors Series was The Boris, named after Boris Karloff, who played Frankenstein in the 1931 film of the same name. The Boris were about as different in just about every way possible to The Frank release: 10 count boxes instead of 13, basic white boxes instead of a coffin, Sumatra wrapper instead of Broadleaf, white bands instead of green, etc.  Only 1,000 boxes of 10 cigars were released of the original The Boris, which measure 7 x 49. The Little Boris is great looking cigar with a medium chocolate brown wrapper almost totally devoid of veins. It has a seemingly perfect triple cap and gives a great give when squeezed—perhaps just a bit hard. The Sumatra wrapper is neither rough nor smooth—sort of in between those two descriptions, feeling almost like really old, dry leather that used to be supple. There an aroma of a strong of barnyard, sweet cedar, manure and a little black pepper.

The first third of the Little Boris starts out with the absolutely perfect amount of spice on the tongue—along with intense flavors of sweet wood, leather, milk chocolate and coffee. The finish is absolutely amazing and the profile is almost equal parts sweet, creamy and spicy. In fact, along with the milk chocolate note, I am reminded strongly of spicy chocolate bars. There is just a touch of white pepper on the retrohale, and it comes and goes throughout the first third. Strength starts out at slightly less than medium, and is increasing, but slowly. Construction is perfect, and the ash waits for about 1 1/2 inches before falling for the first time. Coming into the second third of the Little Boris and the profile stays creamy and spicy overall, although the spice does mellow out a tad bit around the halfway point before picking up again near the start of the final third. The flavors are distinct: still that wonderful spicy chocolate on top with nuts, cedar, coffee and cinnamon. There is also a great sweet floral note that ebbs and flows throughout the third that was not present before, but at this point, it is not strong enough to really impact the profile. Construction remains excellent, and the strength continues to build, ending at a very strong Medium by the end of the second third. The final third of the Tatuaje Little Boris sees some major shifts. The minor sweet floral note from the second third explodes, becoming the dominant flavor for much of the final third, while the strength also bumps up a notch, ending just shy of the full mark. Other flavors are still roaming in and out, most notably creamy nuts, espresso, and earth. The spicy chocolate note that dominated the first two thirds is still around, but much reduced, although the spice is still very much in evidence. Still a bit of white pepper on the retrohale as well, and the construction ends the same as it began: wonderful. The cigar did get a bit hot at the end, but I was still able to nub it fairly easily.