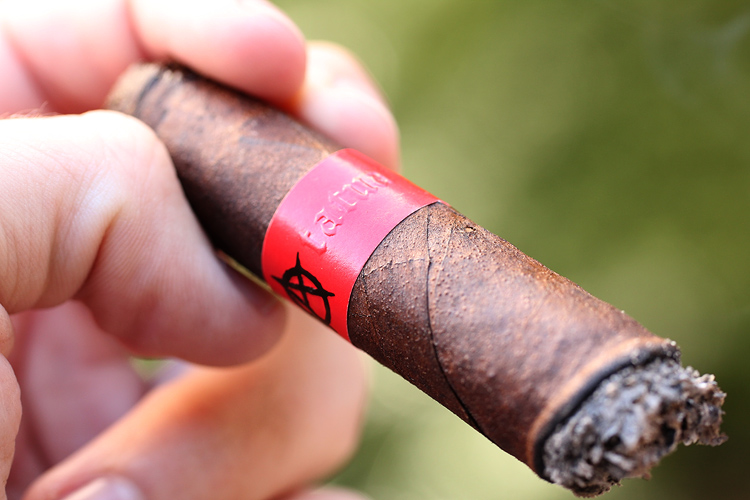 You’ve no doubt heard about the predictions for the end of the world that came and went in recent weeks – specifically the end of the Mayan calendar that had some people fearing the explosion of the planet on either December 21.

The Tatuaje Anarchy Apocalypse is a smaller version of the Tatuaje Anarchy, a cigar released in December 2010 as a store exclusive for Smoke Inn in South Florida. The Anarchy was the first cigar in Smoke Inn’s Microblend Series, which has gone on to include the Padrón SI-15 in Natural and Maduro, the Arturo Fuente Solaris, and the El Hijo from My Father Cigars.

On December 10, 2010 Smoke Inn Cigars of South Florida released upon the world a masterful creation concocted by Pete Johnson of Havana Cellars and the Garcia Family of My Father Cigars. The cigar was the Tatuaje Anarchy and it took the nation by storm. The cigar is made with an extremely limited Ecuadorian Habano wrapper that was hand-selected by both Pete & the Garcia family.

You will find this dark, oily wrapper having almost a “fuzzy” feeling on your lips. This cigar is bold yet extremely smooth. Going against the grain of typical limited run releases, we wanted Tatuaje Anarchy to be priced reasonably, so that all who are fans of Pete’s brands could embrace this release without breaking the bank. The cigar is a perfecto a little over 6″ and has a slow taper of 48 to 52 ring gauge. Only 1500 boxes were produced and it will be a sad day when they are gone.

While the second installment of the Tatuaje Anarchy line is basically the same blend as the first in a shorter and slightly skinnier vitola, there was a subtle bit of blend tweaking to evoke the flavors of the original Tatuaje Anarchy but according to the Tatuaje Anarchy website, deliver them in “somewhat of a more concentrated fashion.”

Where you will find more notable changes are in both the band and the box. The color scheme has been reversed with black text featured on red backgrounds for the Apocalypse release and the box receiving a more ornate design, including what could be interpreted as references to the Mayan calendar. In addition, production was also scaled back by 200 boxes to only 1,300 boxes of 15 cigars. 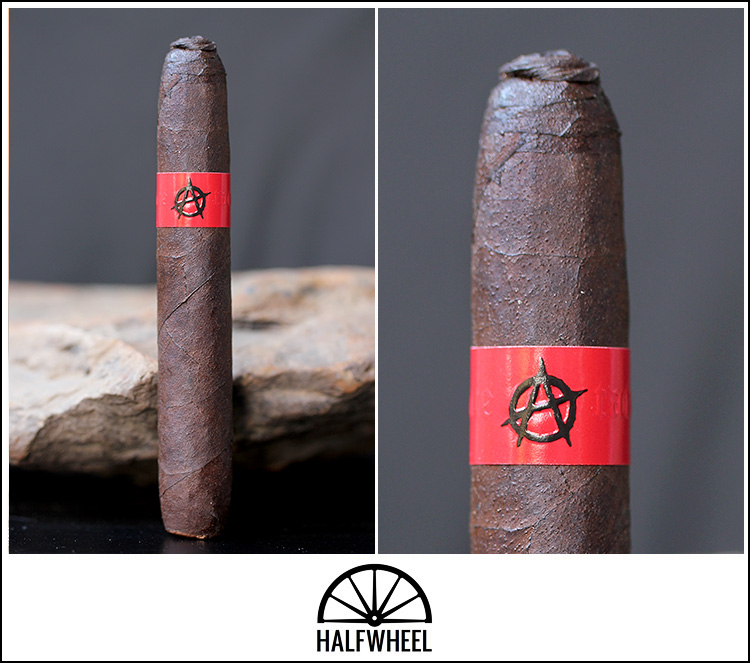 The Tatuaje Apocalypse has a toothy and textured wrapper in an earthy, chocolate shade of brown. The foot and head are equally eye-catching, with the Figurado shape drawing your eyes to both equally. The wide, open foot is balanced by a tightly coiled strand of tobacco at the head of the cigar that resembles a cinnamon bun. There is a temptation to want to pull the coiled cap off, though it seems pretty well attached to the cigar and to itself, so a clip with the blades right underneath the bun is the more appropriate cut. Pre-light notes of tree bark, dark baking spice, leather, wet earth and a bit of pepper dominate the nose, while the cold draw has a distinctive red pepper note backed by rich hot chocolate, reminiscent of a particular Mexican hot cocoa I became mildly addicted to several years ago in Playa del Carmen. Subtle notes of wood and leather round out the noticeable flavors.

As soon as the flame hits the foot of the cigar, the first third of the Tatuaje Apocalypse comes alive with notes of warm barnyard and pepper. Smoke billows off the foot of the cigar, creating a warm, rich and spicy aroma in the air – and making for an incredibly enjoyable start. Rushing through the cigar brings immediate consequences – in addition to getting overly warm, the taste goes from fairly heavy and rich to a bit lighter and much sharper – a quick reminder to take your time with this. The first third is strong but not overpowering when it comes to strength and spice and falls right in line with what most people would expect from a limited production Tatuaje. 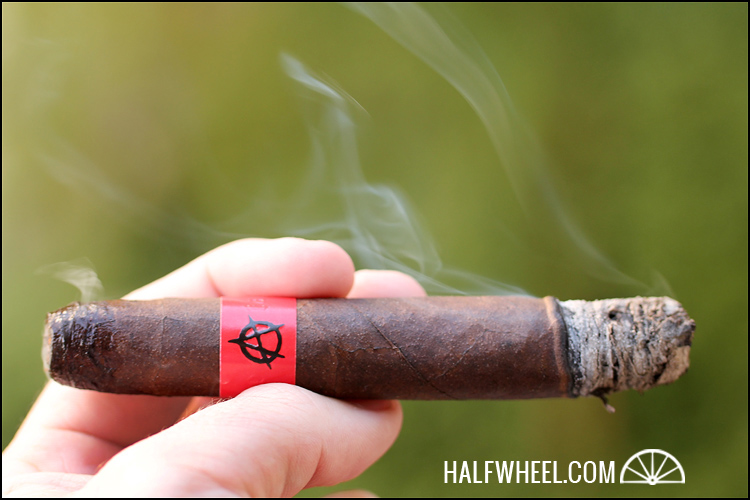 The second third doesn’t bring a significant amount of flavor changes, though it has mellowed out just a bit from the explosion of flavor that was found early on. There is still a fair amount of spice in the nose and a good retrohale proves to be quite the challenge. There are a few points where a flavor that can only be described as thick, warm root beer starts to come out. Up to this point it’s been the only real discernible flavor change, as once the spice settles down after the first inch, the Tatuaje Anarchy Apocalypse seems to find its groove and doesn’t deviate too much. Black pepper plays a fairly steady role through the midpoint, never taking the lead role but always staying on stage and fairly close to the spotlight. 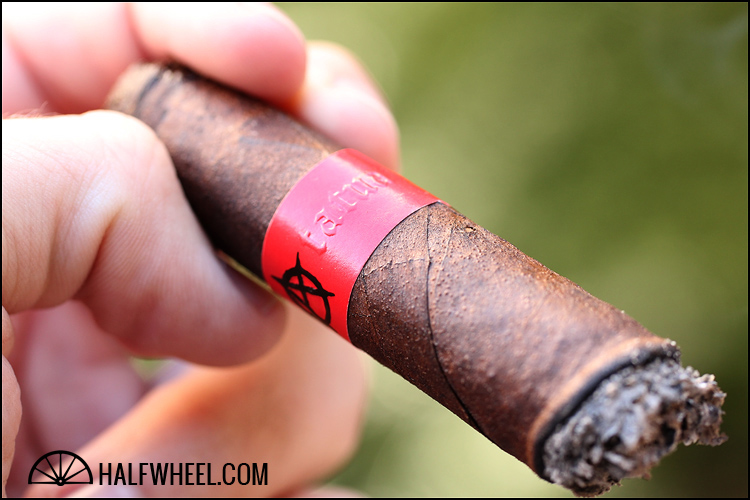 The final third of the Tatuaje Anarchy Apocalypse sees a turn towards a richer, heartier and somewhat sharper flavor—not necessarily a burnt taste, but certainly heading in that direction, similar to a steak cooked past medium but not to medium well. There is a definite increase in the white pepper component, as well as the introduction of a chalk note, with the pair combining to really light up the palate in the final inches. The shrinking ring gauge and increased proximity of the burn line make the cigar hard to nub, with each one needing to be put down with about an inch and change left. 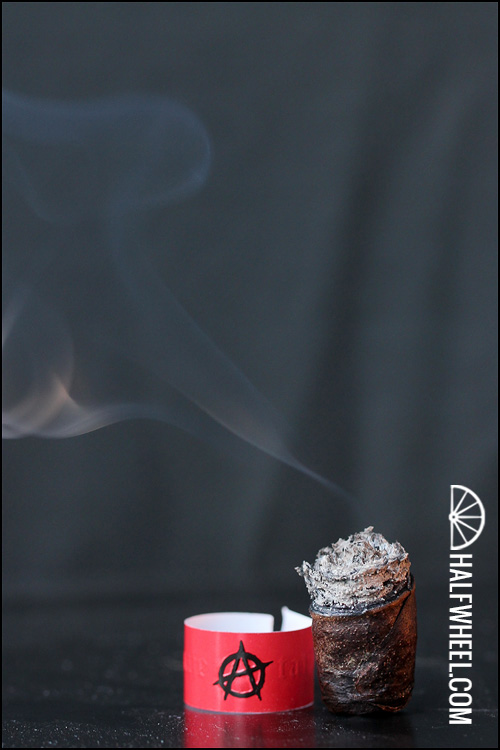 The Tatuaje Anarchy Apocalypse wastes no time getting things started in the flavor department before finding its groove fairly early on in the initial third. Other than a few minor variations, it doesn't veer too far off course from what has proven to be a very successful formula for Tatuaje: medium-plus in strength and body, a good bit of spice throughout the cigar and excellent construction. The only thing really lacking in this cigar was variation in flavor – once the Tatuaje Anarchy Apocalypse finds its groove, it just doesn't want to get out of it. Fortunately it's got a good groove going and fans of Tatuaje should be completely satisfied by this cigar. However, it doesn't do much to push boundaries or show a new side of the brand, which leaves it as a very good but not game-changing smoke. It's worth picking up a few, but it certainly won't be the end of the world if this one passes you by.