Last month Fox Cigar Bar held its second annual Foxtoberfest Cigar & Beer Festival in Gilbert, Ariz. A number of manufacturers attended the event, but three of them brought an exclusive cigar with them as well. The three manufacturers—La Flor Dominicana, Boutique Blends (Aging Room/SWAG) and Ortega Cigars—brought new blends for the event. 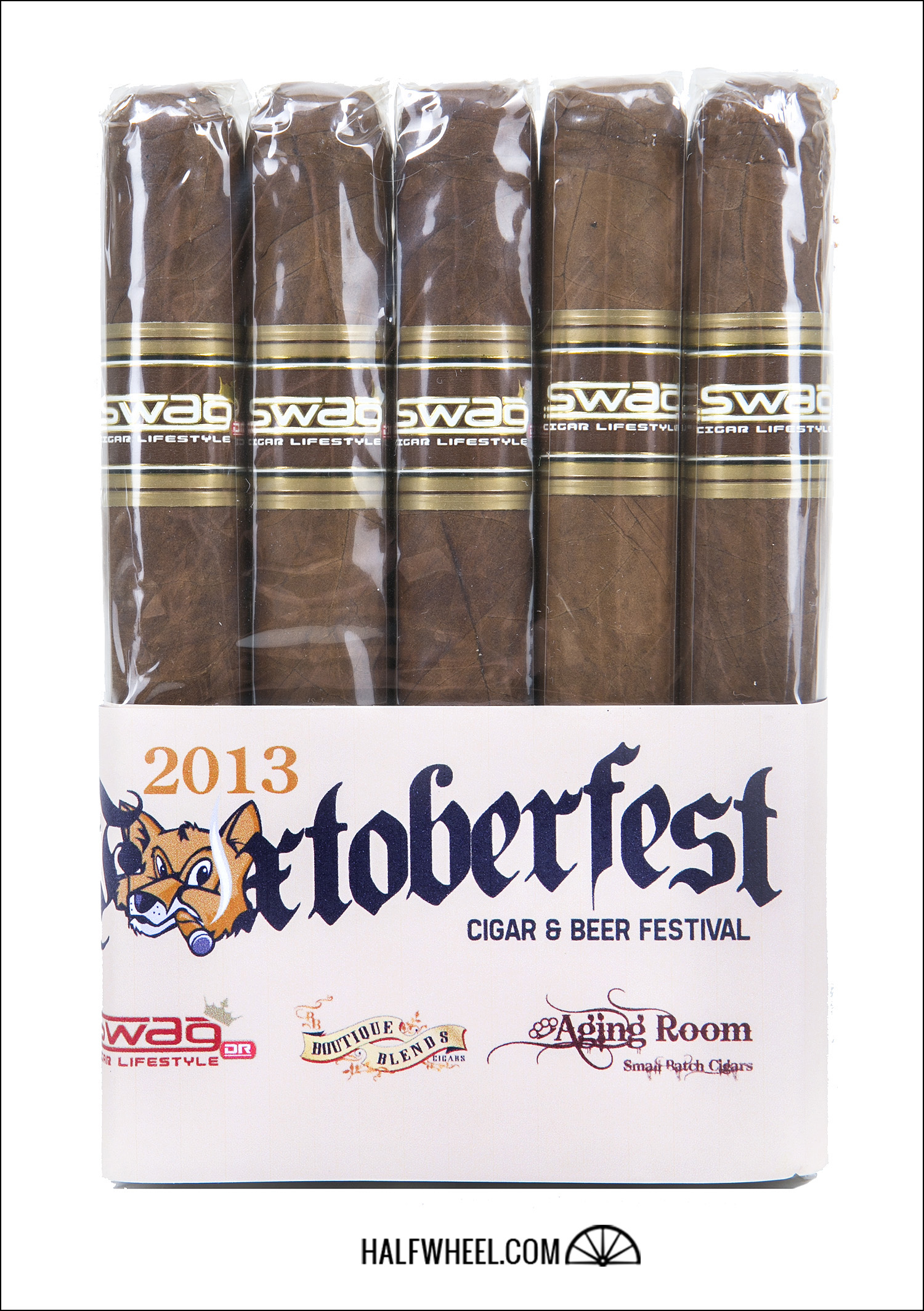 The SWAG Foxtoberfest is a really nice looking cigar sporting a mottled light brown wrapper that is applied well. It is extremely soft, supple and oily and a slight squeeze of the cigar reveals only a few minor soft spots. With such an oily feeling wrapper, the aroma coming off of it is a big milk chocolate note. Clipping the cap and taking a cold draw I get more of the milk chocolate notes with some heavy chili pepper spiciness overlaying it.

Starting out the first third I get some of the earlier chocolate along with some toast, a bit of spice and a very big, bold black pepper note. The draw is the tiniest bit tight and the aromatic smoke is quite plentiful. While the burn is a little rough it is staying even for the most part. With the chocolate fading, the rest of the flavors have morphed into a deep, rich profile of wood notes, spice and still a ton of black pepper. Medium grey ash holds to well over an inch before it drops off. The profile continues to develop nuanced notes including some roasted coffee beans and caramel. Moving into the second third of the SWAG, the bold cornucopia of flavors have become somewhat muted. While I can still discern the notes of wood, spice, coffee and caramel, the pepper has virtually disappeared and any hints of it are held far in the background. The burn has become quite squirrely and I’ve had to make numerous touch-ups here and there. With the draw opening up slightly, I see an increase on even the plentiful amount of smoke earlier. Wood and coffee notes are at the forefront of the profile with the others fading slightly further into the background. Continuing the trend, the final third sees the entire profile fading even further with some bitterness showing up, though I still get hints of the delicious profile from earlier. The profile of the Foxtoberfest has reminded me of a dying candle, giving off less and less light until only the slightest flame remains. Adding to the cigar’s now seemingly constant touch ups is a relight as well, which doesn’t help the waning notes. With only a little bit left to the cigar, the flavors have deteriorated into a muddied, bitter mess that gives an unfortunate ending to the whole thing. Given that the first cigars I smoked were wet, it was nice to see a few weeks drying out produced a experience. Unfortunately however, the SWAG Foxtoberfest still seemed to devolve into a mess by the final third of the cigar. I’m confident rest will continue to improve this cigar, as the difference between the first two and the third I smoked was immense. The initial profile of the cigar was phenomenal and I was very sad to have it fade as I smoked it. At the moment, half the cigar is very good and half is bad; and that’s enough for me not to want to smoke anymore right now. I don’t think you would be foolish buying a five-pack if Boutique Blends or the flavors from the first half are your thing, but don’t expect anything except disappointment at the moment. The cigars need time, more time.