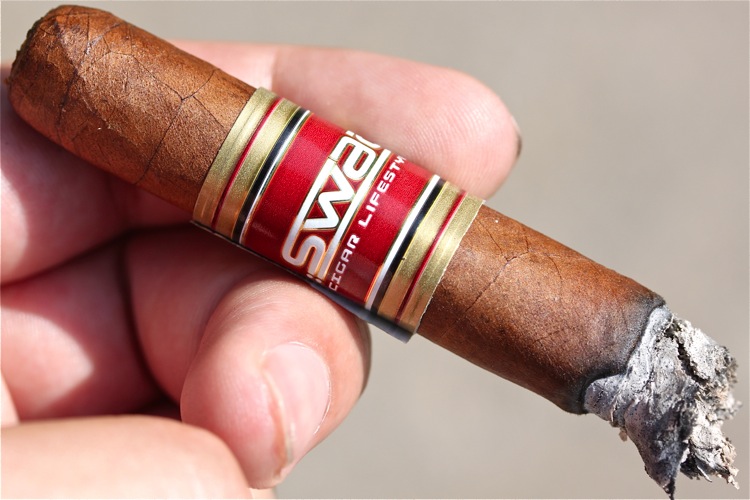 SWAG is a bit mysterious as far as brands go. Oliveros introduced SWAG last year at IPCPR, their take on the “boutique” brand that also sought rebrand the Dominican profile. I’m not sure as to why this is deemed necessary as the DR has seemingly shook off the “mild” reputation with Fuente’s Opus and Litto Gomez’s La Flor Dominicana, but Oliveros tries nonetheless. While packaging and SWAG Club cards are great, the real question comes down to the cigars themselves. Today’s offering is the SWAG Elite, i.e. the Lancero, my thoughts after the jump.

Today’s Smoke
Pepín tried to make a Dominican cigar in Nicaragua, the Nestor Miranda Dominicano. The results aren’t my favorite. This is an attempt to produce a Nicaraguan profile from Dominican tobaccos. There’s a lot going on here, causing a lot to be overlooked. Most notably the fact that this is a single farm vintage of all Dominican Habano Ligero. Each cigar covered in a thin paper in place of a traditional cedar sleeve. Foot bands read “Puro Dominicano” a reference to the aforementioned sourcing of tobacco. It’s not your topical Oliveros in appearance, most noted with a small “Lifestyle” embedded below “SWAG” on the main band.

The Elite is a half inch shorter (7 x 38) than the traditional El Laguito No. 1, fairly typical of the modern Lancero. More noticeable, the lack of veins on the reddish leather colored Dominican Habano wrapper. Not much aroma from the wrapper, some faint leathers and a medium cocoa. It’s a very good roll that produces a cigar that is a bit soft the touch, but nothing worth complaining about. Aroma from the foot of the SWAG is a bit interesting, lots of candy fruits dominate over bits of earth and cocoa on the medium-ish aroma. Lighting
Another clip with Xikar’s famed scissors. There’s a lot of some fruity cotton candy with leather, red wine, earth and spices adding body to the medium-full aroma. Cold draw is perfect allowing a medium-full flavor of sweet candy fruits mixed with red wines and some vintage tobacco underneath, medium-full. Lighting is a complex aroma of toasty, fruits, leather and cocoa. First draw of the SWAG is mix of leather and cedar that transitions to deep nuts with ints of spice followed by a cedar and earth finish, medium-full all the way around.

First Third
Nuts and earth on top of herbs, spice and cocoa. It’s full-bodied and smooth, albeit medium-plus in the flavor department. Finish is cedar and cocoa mix on top of some earth, medium-plus and short. Construction is good, although both cigars had a bit hard of a time staying lit and holding even a half inch of light white ash, but in terms of draw, we are in a good place. Smoke production of the Elite Habano Lancero could be a bit better, but the toasty aroma that fills the humid Carolina air is a classic.

Second Third
You recognize the second third by the spices that begin to build. An elementary nutty flavor is the strong flavor, but cocoa, herbs and tobacco are molding into a mix behind it that make it a bit hard to distinguish amongst the medium-full flavor. Finish is a lot of black pepper with oak and tobacco calming down the slightly harsh medium-full flavor. The SWAG lengthens a bit, but it’s still not breaking any records. Much of the rest is the same. Both times, the ash is continuing to fall off as it pleases and relighting was necessary on one of the sticks.Aroma adds some sweeter earth notes, but it’s pretty overwhelmingly Dominican toastiness. Final Third
Things change a lot. It’s a mixture of herbs, cocoa, spices, and a thick syrup flavor on the medium-full. On both Lanceros, it became apparent the flavors were molding together as the cigar progressed, which is not necessarily a bad thing. That awkward syrup note extends to the finish where is is joined by woods and some spicy earth notes. It’s odd, the syrup is not at all sweet, a bit harsh exactly. The finish really extends itself, which is a welcomed improvement. While I still struggle with the ash, the smoke production skyrockets, which is nice. Eventually at about an hour and a half I set the cigar down.

For the Novice
While this cigar is definitely not for the new smoker because of a combination of factors, it does raise some time to talk about marketing. This isn’t directed at Oliveros, as much as it is for the entire industry. There’s no need to extend yourself with marketing, because that’s what happens here. This cigar doesn’t have the strength of a fuller Nicaraguan profile, it just doesn’t. So, when one smokes a cigar with the assumption of this fullness, it can be a bit disappointing. Is this full-bodied? Yes. Full strength? No. It’s about medium plus, at best. That discussion takes away from what is here, which is a fairly impressive medium cigar for the price, and a unique Dominican single farm vintage. In the End
The SWAG Elite Puro Dominicano is a good cigar. Construction details need some help, but nonetheless, the smoothness and body is definitely there. However, I feel that marketing this as a stronger cigar is just a falsehood. Is it a different cigar than most of the Oliveros I’ve had? Yes. The delicateness that is present in a lot of other cigars is gone. The SWAG seems to have a bit of an unrestrained nature, but it doesn’t translate into “strong.” At $6ish MSRP, it’s towards the bottom of the Lancero marketplace in price, and I think it’s in a fair place for what you get, better if you avoid the annoying construction issues that I experienced.

81. Another solid option for an everyday cigar, particularly when construction is better than what I got.