It’s been a while since we’ve reviewed anything from the 2012 STUDIO TOBAC World Tour sampler, but we still haven’t take on the Prototype Connecticut ST-EFG01. While it’s rather limited in nature, it’s Oliva’s entry into a category that has received a lot of attention of late — full-bodied Connecticuts. The EFG01 has a great roll with a rather noticeable cap for an Oliva-made product. The Connecticut wrapper has light veins, but is relatively rough overall making for a somewhat deceiving appearance. Color is actually pretty dark, more of a mocha than a mustard with very little yellow. Aroma from the wrapper is medium-full with sweet nuts, earth and a bit of fruits. Roll is even and pretty solid, not terribly surprising for the STUDIO TOBAC custom rolls. From the foot it’s an aroma of a very strong sweet nuts and with a bit of brown sugar and earth underneath. Flavor is layered and just south of full. Cold draw is once again full with grass, sour nuts, milk cocoa and earth; there’s also a noticeable spice through the nose.

The first third begins with a heavy Nicaraguan aroma before a mild pepper starts with some woods and sweet nuts taking the core before the finish of nuts and cedar comes in. Core settles into a slightly sweet woods over earth and letter. The creaminess from the wrapper is coming through nicely, but there is a bit of a Nicaraguan pepper coming through. Strength-wise, the ST-EFG01is barely a medium, but the body is full. 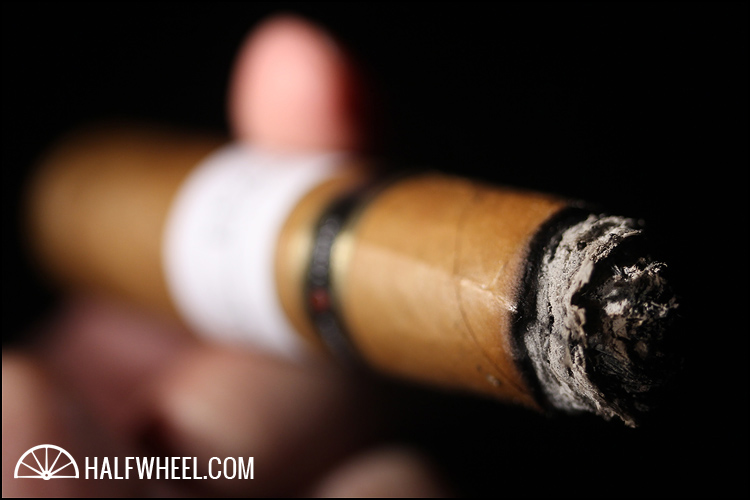 Into the second third and there’s a slight increase in the overall flavor. There’s a touch of coffee, but the cedar and earth remain at the front with an ample amount of creaminess from the STUDIO TOBAC. Draw remains phenomenal and the smoke production doesn’t leave anything to complain about. Once again, flavor and body — full; strength — medium. It gets a lot earthier in the final third. The cedar is still the core of the STUDIO TOBAC, but the pepper is dying down. As you can see, the cigar begins to fall apart. I’m able to smoke it to a point, and then I stop — no point in ruining a good thing. The Bottom Line: The Oliva Connecticut Reserve and the Camacho Connecticut were the two cigars credited with changing the perception of the lighter shade a few years ago. Over the past 12 months, a variety of manufacturers have tried releasing Connecticut-wrapped cigars, almost exclusively the Ecuadorian variety, with stronger bodies and fuller flavor. To this point, I think they’ve been close, but no one has put together this complete of a cigar, no one. This has the great Connecticut flavor with some of the more classic Nicaraguan notes along with a full and rounded body and a strength level that sits around medium. Off the top of my head, there’s only a single Connecticut-wrapped cigar that is definitively better than the STUDIO TOBAC Prototype Connecticut ST-EFG01 — the Cabaiguan WCD 120 and WCD 120 REDUX. They are two very different cigars, but they are both complete and excellent, something that seems to be missing more and more.