Later this week—or early next week—when the debut release of B.G. Meyer Co. lands on a retailer’s shelves, a transition will be complete. It’s not for Rob Weiss, the owner and face of B.G. Meyer Co., but rather, for Camacho—who serves as his partner in the new venture.

It’s the completion of the new Camacho, which formally kicked off a little over a year ago in Dallas, Texas when the Honduran brand showed off new branding, and in some cases, new blends of its entire portfolio. This extended all the way to Honduras, where the factory Oettinger Davidoff Group had purchased from the Eiroa family four and a half years before, was getting a new name, new management and much like the brand itself—a new identity. Weiss, a television producer, is the third member of Camacho’s Board of Bold, joining football coach Mike Ditka and jewelry designer Matt Booth, as celebrity brand ambassadors who also have their own brands, all made at Agroindustria LAEPE S.A., better known as “the Camacho factory.”

Weiss, who has served as a producer and writer on HBO’s Entourage, How to Make It in America and more recently Ballers, is the final piece in the larger transition, the last public step of the old becoming the bold. Camacho looks—and tastes—different, its factory is now called something new and now the Ditka, Room101 and B.G. Meyer Co. have a place in the larger Davidoff family.

Standard Issue is the first release from B.G. Meyer Co., which is named after Weiss’s Rottweiler, Big Meyer. It is a five-vitola line made up entirely of Nicaraguan tobaccos, each packed in a heavy washed-out wooden box of 20, which closes via a rubber band instead of a traditional clasp. 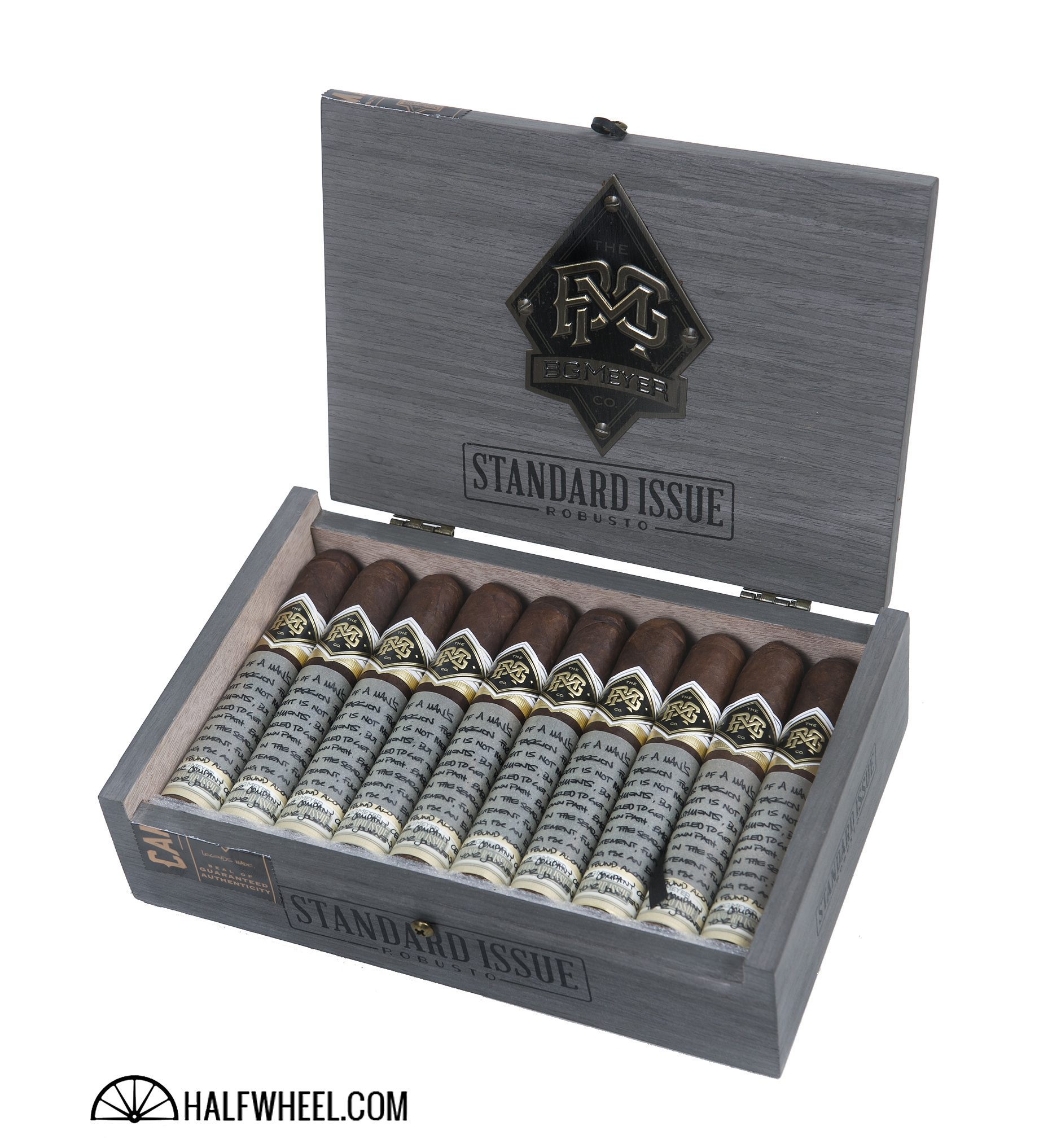 Each cigar features three different pieces of paper: the main band, foot band and a sleeve, which includes the following:

THE BREADTH OF A MAN’S SPIRIT RESTS IN HIS PASSION FOR ADVENTURE. A LIFE OF MERIT IS NOT MEASURED BY ACCOMPLISHMENTS, BUT RATHER THE RAOD TRAVELED TO GET THERE. FORGING YOUR OWN PATH. EMBRACING THE UNKNOWN IN THE SEARCH OF MEANING, EXCITEMENT, FULFILLMENT. THOSE SEARCHING FOR AN EPIPHANY & THE FREEDOM FOUND ALONG THE WAY. THE B.G. MEYER COMPANY CELEBRATES THIS JOURNEY. YOUR JOURNEY. The Nicaraguan habano wrapper has decent oils, but they are more present to the eye than the touch. Aroma from the cigars, which ship without cellophane, is relatively sweet with some more pleasant barnyard notes. From the foot, it’s a sweet cinnamon note—similar to the transition of an Atomic Fireball candy from cinnamon in to sweet—with touches of chocolate. The cold draw has a unique fruitiness—almost like an intense melon rind, somewhat green to the mouth and not particularly pleasant. There’s dry earth and bitterness as well, which don’t pair particularly well with the exotic fruit flavor.

Standard Issue is quite elementary with it start: sweet cedar and cocoa that rush to a hearty cedar peak before creaminess begins to set it. The good news is that only lasts for a few puffs. A toasty bread note adds itself to the cedar and then through the retrohale something rather familiar emerges, the refreshing citrus note that dominated the Las Calaveras LC550. It’s a bit reduced compared to what I find from the Crowned Heads creation and a bit more orange-like than grapefruit, but it retains that refreshing characteristic on the retrohale that I thoroughly enjoyed. While the construction was generally quite good, one sample I smoked had an uneven burn, nothing too problematic. At the transition mark a hickory-based barbecue emerges from the inherent sweetness. It’s not only through the nose, but also in the air around me, which dramatically improves my initial experience with B.G. Meyer Co. The citrus and hickory notes remain on the retrohale, which is really where the action is. At times, a cleaner avocado note appears on the back end of the citrus note, reminding me it’s been a few days since I’ve had guacamole. There’s an increasing earthiness, a bit too generic for my liking, although it does add another dimension to the profile. Strength is medium-plus, seemingly wanting to increase at every puff, but never actually following through on that hint. By the final third, the citrus note has begin to slip. It’s still easily identifiable, but reduced and losing the battle to some of the newer notes: coffee grounds, the cedar, a growing toastiness and the return of the cinnamon note right at the final inch. There’s been almost no pepper for the entire length of the cigar, although it’s beginning to show that it might have been masked a bit under the larger citrus, particularly as the cigar warms up in the final inch. Outside of touch-ups, the Standard Issue showed no construction problems and all three samples stayed lit from start to finish. While I would not say this is a freshman release in the truest sense, in some ways it is—and a highly impressive one at that. Standard Issue was not anything standard. And now that the obvious pun is out of the way, there’s the positives to focus on: a sold unique flavor, decent construction and perhaps most importantly, a cigar that keeps you thoroughly engaged from start to finish. There will inevitably be lots of comparisons with this cigar: the recently launched Room101 The Big Payback, another Nicaraguan puro from the factory, perhaps even anything that Camacho, Room101 and Ditka have done—and maybe even Las Calaveras. For me, if the latter is part of the conversation, you have a very good start. For the sake of another pun, I’ll put it boldly—my favorite cigar to come out of Agroindustria LAEPE S.A.