We started hearing faint rumors about a brand of cigars that would be backed by various large cigar retailers more than a year ago, although details were very scarce at the time. Eventually we learned that the brand would be called Sindicato Cigars, and that it would be headed by none other than Jim Colucci, the former executive vice president of sales and marketing of Altadis USA.

We had all of the details in a news post back in July:

Sindicato Cigars, the cigar company formed by a group of retailers that will makes its IPCPR debut later this week, has officially announced the trio of lines that they will offer at the trade show, as Member Chairman Abe Dababneh sent out details  of their launch on Thursday afternoon.

The Sindicato Cigars Hex is “a bold and hearty smoke (that) delivers complex flavors,” according to the company’s promotional information. It uses a select dark Ecuadoran wrapper over Nicaraguan binder and filler that is being produced in Condega, Nicaragua. It will debut in five sizes, all packed in 21-count boxes:

The Sindicato Cigars Affinity uses an Ecuadoran Connecticut wrapper over a Nicaraguan binder and filler from Nicaragua and the Dominican Republic to create a medium bodied smoke that the company describes as “rich, flavorful and complex.” It will debut in six sizes:

Completing Sindicato’s debut portfolio is the Sindicato Cigars Casa Bella, a value-based cigar that will be offered in five sizes with MSRPs under $2.10. It uses an Ecuadoran Connecticut wrapper over a Nicaraguan binder and filler from Nicaragua and the Dominican Republic to create a “smooth, flavorful mild to medium bodied smoke.” All five sizes are packed in 20-count bundles.

Sindicato Cigars formally announced their formation in early March but has been largely quiet since that time. The group has brought on former Altadis USA Executive VP of Sales & Marketing Jim Colucci as President/CEO of the company.

The blend of the Hex is described on the Sindicato Cigars website:

A unique and special cigar made from aged rare tobaccos carefully selected and blended in Condega, Nicaragua. The wrapper is a rich, dark Ecuadorian Habano wrapper crafted by the finest torcedors to create an unforgettable smoking experience. This bold and hearty smoke will deliver complex flavors and is destined to become a favorite of cigar smokers.

Sindicato debuted Hex at the IPCPR 2013 trade show and convention in July. The boxes of Hex look like this: 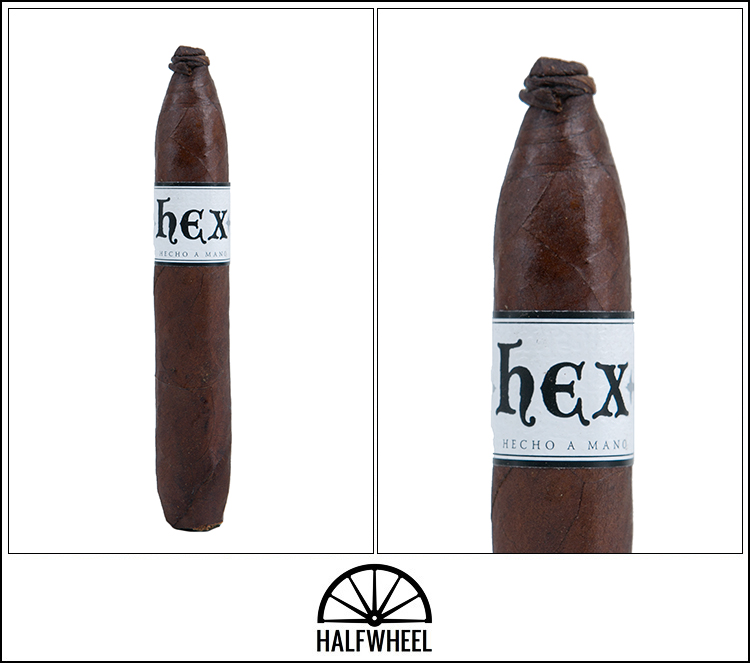 The Hex Perfecto is an interesting vitola with a bun on the cap and an open foot. The wrapper is a dark espresso, smooth to the touch and with a little oil present, while the bun is securely attached. There is a bit more resistance than normal when squeezed and the aroma coming off of the wrapper is a combination of coffee, leather, sweet chocolate, hay and earth.

The Hex starts off the first third with a strong and dominant leather note, along with bitter coffee, dark chocolate and gritty earthy notes also present at various points. There is very little sweetness present at this point in the cigar, but there is a decent amount of black pepper on the retrohale, enough to impact the profile. Smoke production is sparse, but both the burn and draw are excellent. Strength-wise, the Hex Perfecto barely moves out of the lighter medium range by the end of the first third. Unfortunately, the second third of the Hex starts out pretty much the same as the first, with flavors of leather and chocolate leading the pack. Other flavors of earth, dark coffee and nuts flow in and out, but none strong enough to really dominate the leather note. Construction-wise, the draw is fine and burn is razor sharp with the ash not falling for the first time until very close to the halfway point. The black pepper on the retrohale is still strong enough to notice, but it really seems to be dissipating quickly, and the strength has not budged much, ending the second third just a little closer to the medium mark. The final third of the cigar is a virtual carbon copy of the first two thirds with flavors of espresso, earth, leather, meaty  and chocolate. There is still a noticeable amount of pepper on the retrohale, but the slight sweetness that was present in the first third is all but gone. The one standout is the construction with the draw and burn really hitting all of the high notes. The strength has not increased much, and ends the cigar firmly in the medium category. Hearty? Perhaps. Bold? A bit. Complex? Not so much. Sindicato was definitely one of the brands I wanted to try from the most recent IPCPR show, based on who was in charge, and the unique circumstances behind who was behind it. What could a company funded by some of the largest retailers in the country and headed by a cigar legend come up with? Well, at least in regards to the Hex, the answer is: nothing special. While it is a good-looking cigar with some decent flavors and great construction, it had nothing overly distinctive or interesting to really set it apart. It will probably sell fairly well based on the price point, but the lack of complexity really hurt the overall profile.