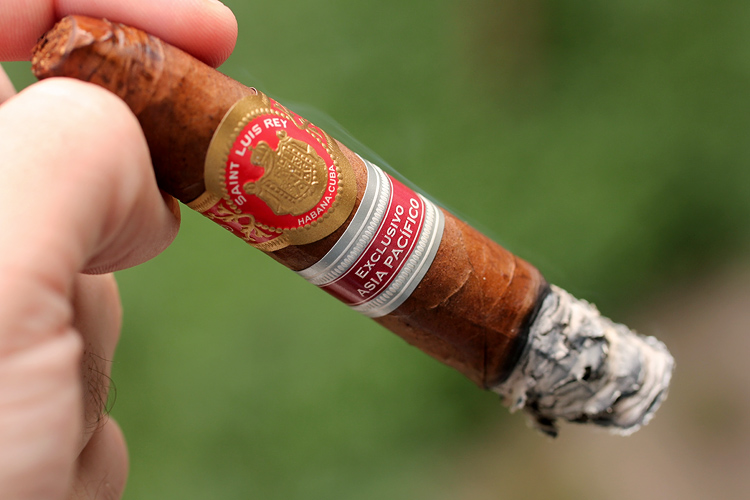 The Saint Luis Rey brand is not the most well-known of the Cuban marcas, but it isn’t for a lack of history. It dates back to a registration of the name in 1927 by a pair by the name of Zamora and Guerra. However, not much is known about it from that time until 1940, when it was relaunched at the behest of a British cigar import company. It has been in production ever since, and is currently classified by Habanos S.A. as a Local brand with minor market share.

Like all premium handmade Cuban cigars, the tobacco primarily comes from the Vuelta Abajo region of Pinar del Río, the westernmost province on the island, as well as the Semi Vuelta region of the same province. There is a good bit of discrepancy as to their flavor profile, as CubanCigarWebsite.com says they are generally considered to be full strength cigars, while a number of retailers tend to place them on the lighter side of the strength scale.

The name also has some uncertainty in its origins: one theory is that they are named for the main town in Pinar del Río, San Luis, that is the hub of the tobacco industry, while another is that they reference The Bridge of San Luis Rey, the popular 1927 novel by American author Thornton Wilder.

This is the first and only time that the Saint Luis Rey marca has been used for an Edición Regional release. However, it is far from the first regional release for the Asia Pacific region.

The Asia Pacific region currently has 13 Edición Regional releases, dating all the way back to 2006, which was the second year of the program:

You’ll notice that the 6 1/3 x 52 Pirámides vitola has been featured three times in Asia Pacific regional releases. I sent an e-mail to The Pacific Cigar Co. Ltd., who is the distributor for the region asking for some insight as to why that is but have yet to hear back from them.

As for the 13 Edición Regional releases for the Asia Pacific region, it’s the most made for any country or region. Switzerland is second with 12, while Germany (Alemania) is third with 10.

If you’re not familiar with the Edición Regional program, here’s a quick refresher:

The Edición Regional program started in 2005 and utilizes the 17 local and multi-local brands for their releases exempting the ten worldwide premium global and niche brands. The cigars are limited production releases with a minimum run of 25,000 cigars and are made exclusively for a regional market, which can range from a specific country to a geographic region. The distributor for the market initiates the release and must also underwrite the costs of the release.

They are generally available for one to two years, after which time the cigar can be added to the line’s current production range. A distributor can also re-release an Edición Regional in a subsequent year, often with a note included in the box indicating that fact. The vitolas used for Edición Regional releases must be selected from current production vitolas, but ones that are not already used by that line. In addition, new vitolas from other premium brands are not eligible to be used as part of an Edición Regional release.

In addition, recent changes, as noted by Trevor Leask of CubanCigarWebsite.com, have included a lifespan of 12 months with release dates generally in August, September and October. In addition, while some regions have received multiple releases in a calendar year, in 2012 the Edición Regional program was changed to limit Edición Regional releases to one per distributor per year.

At a surface level the Saint Luis Rey Pacificos looks like almost any other Cuban cigar with its medium brown color, a bit of color variation, visible veins and seams and some bumpiness to the roll. It has a bit of give to it, not particularly underfilled but certainly not overfilled. The shape is almost instantly recognizable, as it is shared with numerous other releases in the Habanos S.A. portfolio. The pre-light aroma has notes of sweet hay and a bit of barnyard, along with some faint and varied notes of cake and pretzel dough, with very little spice or pepper. With the pointed cap clipped, air moves easily on the cold draw, with notes of cereal grain (Cheerios, in particular) and wheat bread most noticeable, and again little if any pepper or spice.

As soon as I toast the foot of the cigar, I’m surprised by how much pepper is in the smoke, though this varies from cigar to cigar. Either way, the Saint Luis Rey Pacificos is definitely above medium in strength and body, and wastes no time getting down to business. The burn line gets a bit off track before it’s passed an inch in one cigar, though it doesn’t create a problem and doesn’t appear in the other cigars smoked. There’s a bit of a pretzel dough note that comes out in the smoke, while the flavor seems geared more toward a middle-of-the-road profile. It has notes of bread, cereal and some wood, with no sweetness or overt spice to be found. It’s very engaging without being overpowering and has backed off a bit from its higher octane beginning.

Moving into the second third, the Saint Luis Rey Pacificos stays between medium and medium-full in strength, and I’m wondering just how some have described this as a softer, milder cigar. It’s not overly peppery, but rather driven by intense notes of toast, wood, grain and hay. In one cigar, there was a touch more sourness than in the other two, and it also seemed to have just a bit of mint that I didn’t find in the others. Granted, I haven’t smoked the full catalog of offerings, but this has more oomph that I would have given it credit for based on certain tasting notes I came across. There are a few burn issues in the second third, more with keeping the cigar lit past the midway point.

When the cigar is able to keep itself burning, the final third of the Saint Luis Rey Pacificos is very enjoyable. More upfront notes of hay and wood dominate, with continued backing flavors of cereal grain and wheat bread toast adding a touch of complexity. Hints of earth start to come in at times but seem to be more a remnant than a current note. It’s far from being the most complex cigar I’ve ever smoked, though it is plenty enjoyable and leaves an enjoyable finish on the palate and in the nose. While there seems to be a touch more pepper as the burn line approaches the bands, the hope of finding any significant sweetness of pepper diminish with each puff, and by the time the cigar is ready to be put down for good, it’s clear they won’t be making a memorable appearance. While the overall flavor profile stays fairly one dimensional with only a slight bit of variance from where it started, it’s very enjoyable and would seem to work for most palates and situations.

Avid readers of halfwheel will likely see a repeated theme here: as I've mentioned in many other reviews of regional releases, the cigars found as part of the Edición Regional program are typically enjoyable if not exceptional, and while that's basically the case again here, I do think that the Saint Luis Rey Pacificos is a good bit better than average. I readily admit that I haven't smoked the rest of the Saint Luis Rey catalog, and as such my ability to compare it to its non-ER brethren is lacking. Based on my experience with the Pacificos, I'd certainly be interested in trying them though, as the flavor profile is very agreeable: not overly strong, not too upfront with big, overpowering flavors but also not so mild or bland that it's a waste of time. The blend certainly doesn't seem to get lost in the Piramides shape, and the pointed head seems to concentrate the flavors a good bit and bring them a bit more to life. Yes, there is a premium price being asked for these cigars given the nature of their release, and I don't think I'd be willing to pay that premium on a regular basis. However, as an occasional splurge I don't think I'd find myself disappointed with them, and I don't think you would either. If nothing less, the Pacificos seems to be a good showing of the Saint Luis Rey marca and certainly has me interested in the rest of the line.