In December 2012, halfwheel broke the story of a new cigar coming from Room101 and Smoke Inn, a project called “Big Delicious” that takes its name from Matt Booth’s nickname for Abe Dababneh, proprietor of the South Florida retailer.

The new cigar, the six installment in Smoke Inn’s MicroBlend Series™, made its first public appearance on February 15, 2013, at a dinner hosted by Booth as part of Smoke Inn’s annual Great Smoke event. Attendees of the VIP dinner were given a commemorative five-pack of the cigars, just over two months ahead of its April 26 release date. The dinner was limited to just 60 people, meaning that 300 cigars were released as part of that event.

The cigar is the first collaboration between Dababneh and Booth, whom is known in this project as “Swanky White.” As part of the build-up to the release, a website was launched for the project and contains a weekly comic strip chronicling “The Adventures of Big Delicious and Swanky White.”

Further details came out via a press release on January 15, including a note that the cigar would be based off of Room101’s last successful limited release and use a Habano 2000 wrapper with binder and filler tobaccos from Brazil, Honduras, Nicaragua and the Dominican Republic.

As mentioned above, this is the sixth release in Smoke Inn’s MicroBlend Series™, which launched in December of 2010 and has become an increasing staple of Smoke Inn’s offerings. 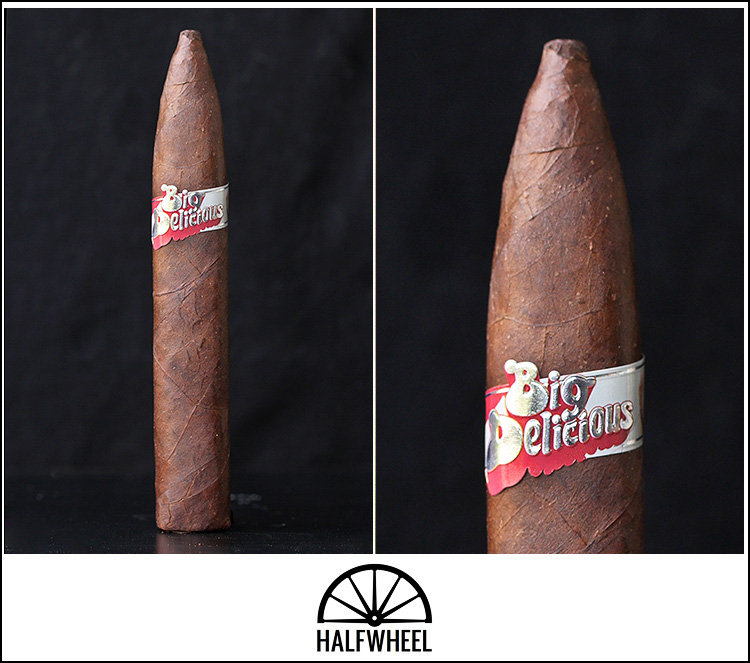 The wrapper of the Room101 Big Delicious is silky smooth and has a slightly oily finish that gives it a unique texture that feels great in the hand. Both samples received had slight cracks in the wrapper at the feet, something that possibly attributed to the closed foot and the wrapper being stretched to cover the end of the cigar. The Room101 Big Delicious is also hefty in the hand, possibly a nod to Booth’s jewelry designs or just the byproduct of the tobaccos used. The pre-light is rich and complex, just spicy enough to be noticeable and backed by an earthy component that has notes of tree bark, some soil, floral notes and in the first cigar sampled, a rich gravy-like note bringing it all together. The cold draw is surprisingly loose with air moving almost unchallenged through the cigar. The flavors here aren’t as dense or intense, yet the pepper note is still present and the flavor is just a bit sharper.

The covered foot wastes no time picking up the flame from the match, releasing a spicy, rich smoke into the air. Pieces of the covered foot begin breaking off and floating away with the breeze while the Room101 Big Delicious billows a peppery white smoke that is meaty, saucy and tangy when it hits the nostrils. The pepper settles down considerably within the first inch or so, likely diluted a bit as the filler and binder come into play and it’s not just the wrapper-covered foot driving the flavor. It has also slowed the smoke production down considerably, and while still impressive, it’s not as voluminous as it was out of the gate. Depending on where you happen to be smoking the Room101 Big Delicious, the first third of the cigar infuses the air with some a slightly sweet aroma that is fantastic. By the time the burn line is an inch or so along, the flavor has softened considerably, becoming slightly sweet and almost like cotton candy in the mouth, minus that cheap sugar crunch. Subsequent puffs take add a creamy flavor to it as it has gone from strong and peppery to smooth and creamy in a remarkably short amount of time. 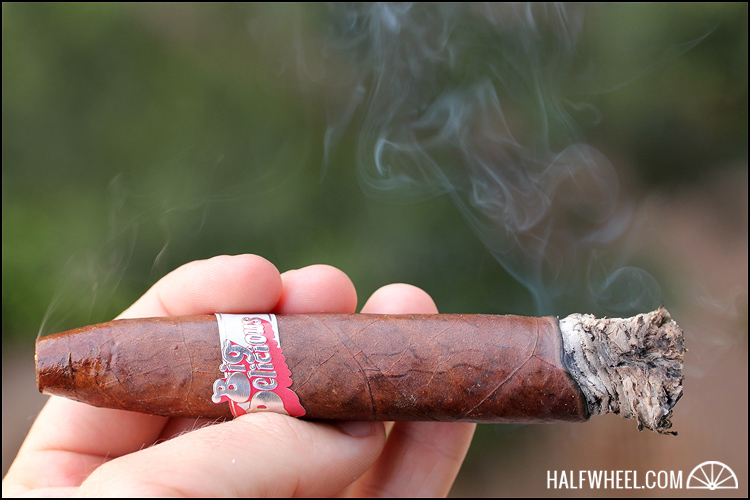 After the ash breaks off nearly two inches in, the pepper returns in a big way but with just enough sweetness to provide balance and contrast and give the Room101 Big Delicious a very complex flavor profile. The flavor starts to intensify and then back off in this middle third, teasing the idea of returning to being big and brash before morphing into a much softer smoke that fills the mouth with fluffy smoke and delicate flavors. What becomes most interesting is that the Room101 sneaks up on me more in the nose than on the palate, particularly when it’s at rest. Nearing the final third, a warm, sweet, strawberry jam note wafts through the air, commanding my attention. 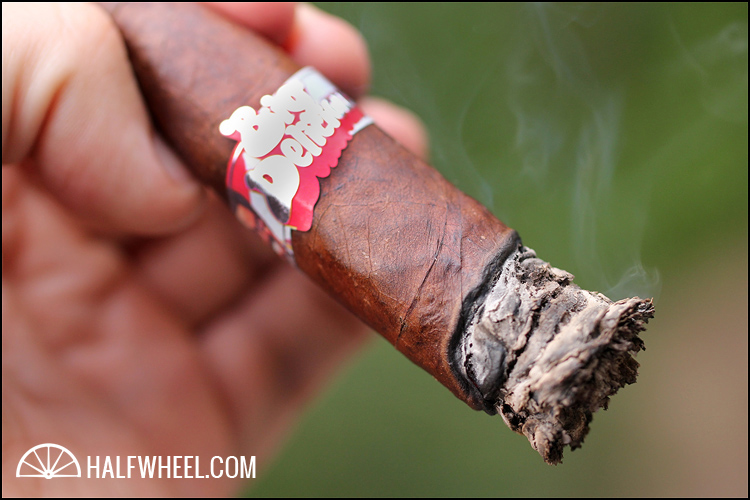 The final third of the Room101 Big Delicious brings the pepper back in a big way, as the smoke makes my eyes water almost to the point of thinking I’d been doused with Tabasco sauce. The palate doesn’t get quite the same level of intensity, but the change is certainly noticeable. The cigar has also ramped up its kick in the final inches, delivering much more of a body punch than it did in the first two thirds. The final third also seems to burn at a much slower rate, with the smoke getting heavier and denser than it was earlier, and providing more time to reflect on the experience up to this point while soaking in the more robust flavors offered in the final inches. 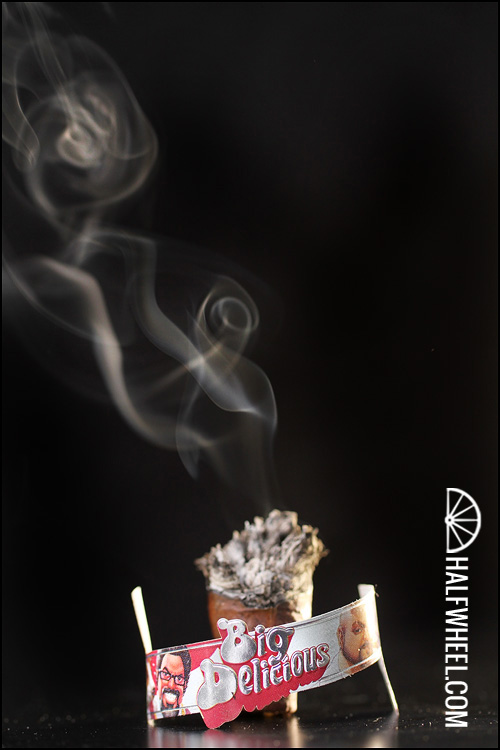 I'm quick to pick on the names that cigars are given, especially ones so upfront as Big Delicious. The big part is pretty easy to agree on – this cigar is sizable and will engage you for nearly three hours if you let it. The delicious part is more subjective, but for my palate hit on a lot of the right notes. It's big and bold to start before beginning an extended dance of moving from creamy and near mild to almost full-bodied and robust, thanks to notes of spice, pepper and earth that sneak up and hit you square in the face with eye-watering smoke. Separate the two extremes and you could create two winning cigars; bring them together the way the Room101 Big Delicious does and you have a complex cigar that lives up to its name.