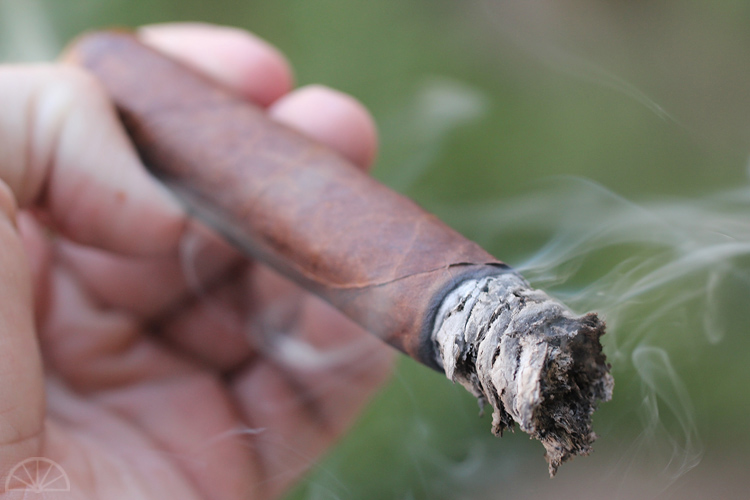 Since the launch of RoMaCraft Tobac in January 2012, the company has quickly expanded into three full lines of cigars, each of which contain a number of event-only, limited availability cigars.

The RoMaCraft Tobac website offers a good amount of detail about the Aquitaine, noting that the filler leaf comes from three separate areas of Nicaragua, Estelí, Condega and a small farm on the Honduran border called Pueblo Nuevo. The blend is similar to the company’s CroMagnon cigar with the difference being the Ecuadoran Habano Ligero wrapper.

News of the new Blockhead vitola started surfacing in mid-February when LeafAndGrape.com reported that it would be added to the CroMagnon and Aquitaine lines as event-only offerings. The vitola is a a box-pressed version of the 6 x 54 Cranium that appears in both lines, making the origins of the name a bit more obvious.

The news also coincided with buzz of several other new releases that RoMaCraft was working on, including the CroMagnon Mode 5 and the event-only CroMagnon Formorian, an Ecuadorian Connecticut Candela wrapped version of the 5 x 56 CroMagnon EMH. Martin announced in late March that the CroMagnon Mode 5 would become a regular addition to the line.

If you’re active in our forums, you might recall that Brooks posted that he was smoking one in late March with RoMaCraft’s co-founders, Michael Rosales and Skip Martin, with the note that “only 100 of them were rolled, but they could be lying lol…”

Here are the two Blockheads together:

However, a recent e-mail to Martin was replied to with him telling me that the Aquitaine Blockhead is “just a test” at this point and that “we have no plans for Aquitaine Blockhead.” So if you want to try this vitola at this point, you’ll have to do so in the CroMagnon blend, which is an event-only size that comes with an MSRP of $9.00 per cigar. 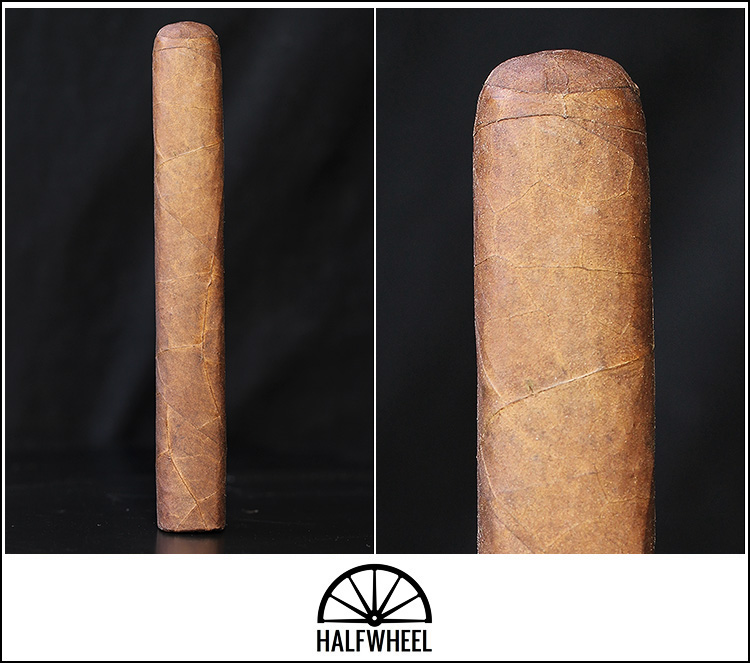 The wrapper is coffee bean brown with some noticeable lighter spots near the veins, which form an interesting grid when studied, almost like looking at a region’s land parcel map. There is one substantial vein but the rest are by and large small and flat, keeping the texture smooth and pleasing to the fingers.  There is a bit of give throughout the Blockhead, though it doesn’t feel underfilled. The pre-light aroma is almost surprisingly mild with just a slight note of graham cracker and such a small amount of spice you have to almost imagine it being there. There was little resistance to the cold draw, showing flavors of nutmeg, a bit of wheat, dry wood and a touch of pepper.

For a lack of pepper on the pre-light aroma and cold draw, there is a good helping of it for the eyes, nose and palate when the RoMaCraft Aquitaine Blockhead begins the first third. White smoke billows out of the cigar from the get-go and the first retrohale delivers notes of white pepper and chalk, along with a bit of marshmallow that is fairly pleasing. Through the first third, the smoke is very smooth, hardly any bite with the pepper felt more in a steady tingling of the nose and eyes. The first bit of ash holds on just long enough to be photographed before falling off, at which point it starts to flower just a bit. 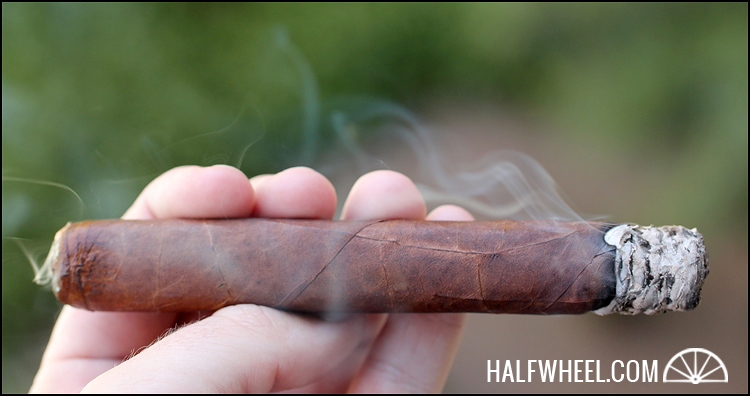 Flavors start to inch up just a bit in the second third of the Aquitaine Blockhead, though I’m a bit surprised by their mildness. The spice bumps it up into a more medium-bodied smoke, but what hits the palate is so smooth and almost creamy at times that it seems more medium-minus. Having peaked at the company’s description of the cigar, I’m wondering where the “strong, smoky, savory flavor” has been to this point. Crossing the midline, that flavor seems to wake up a bit further, and a definite smoky and savory flavor has entered the mix, though it stops short of becoming an all-encompassing flavor. 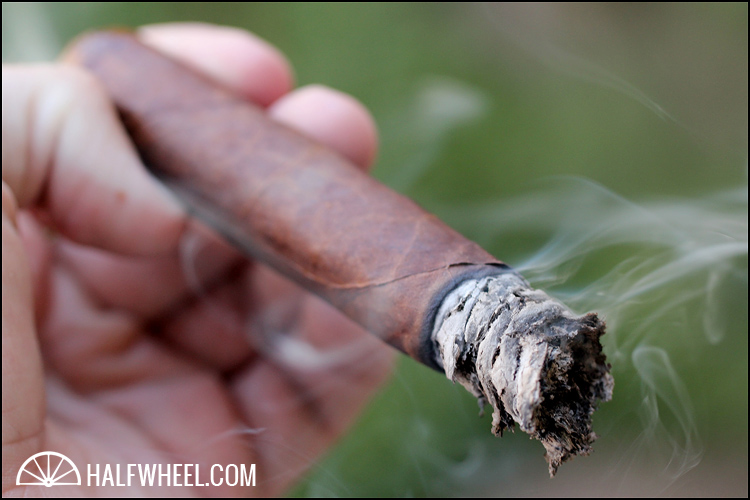 The start of the final third of the Aquitaine Blockhead brings about a delicious, thick note of a fresh baked warm pretzel – just the slightest bit salty and incredibly chewy. The ligero that was mentioned in the cigar’s description seems to be putting out the most spice it has up to this point, as now all of my tongue is getting a good bit of pepper and zing. There is little to no excess heat coming through in the final inches and the smoke stays incredibly friendly on the palate, which calls for a draw poker to help get this cigar as far down as possible. 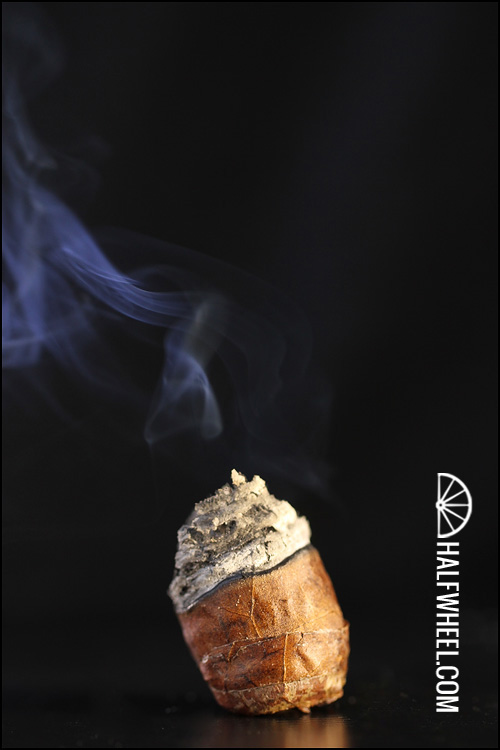 The RoMaCraft Aquitaine Blockhead is an impressive cigar, though I'm not totally sure it stood out enough to have me clamoring for it to be a regular production cigar, or even an event-only stick for that matter. I've thoroughly enjoyed every Aquitaine vitola I've smoked, and this stands up there with all of them, and because the box-press takes some of the size off of the Cranium, might even be a bit preferable to that vitola. For now, the Aquitaine Blockhead is solid proof that RoMaCraft Tobac is putting out some very good cigars that are worthy of trying when you get a chance.