In late 2011, Rocky Patel released the Edición Unica 2011. According to the company, this cigar was the winner of the Humo Jaguar Festival that was held in Honduras towards the beginning of the year. Both the cigar and the festival itself went quiet in 2012, but at the 2013 IPCPR trade show and convention, the company showed off the cigar, once again in the gigantic 100-count chests, but with different colored bands.

The cigar itself actually carried some controversy, mainly that both Rocky Patel and Miami Cigar & Co. claimed to have the winning blend. Charlie Minato detailed this in his review of the original cigar:

Before the 2011 IPCPR trade show, we broke the news that Miami Cigar & Co. would be introducing a host of new cigars, including Humo Jaguar, which they claimed won the Humo Jaguar festival. The cigar would be offered in three vitolas (Robusto, Toro and Gigante) and was made by Plasencia.

Fast forward a few months and Rocky Patel shipped their version. To date, neither company seems to have publicly resolved what actually took place. Miami Cigar & Co. still claims that they have the winning blend, whereas Rocky Patel has described the Miami Cigar & Co. version as a commemorative cigar for the festival, whereas the Edición Unica 2011 is in fact the winning cigar.

Of note, both the Rocky Patel Edición Unica 2011 and Humo Jaguar Toro are 6 x 52 Toros. While the full blends aren’t known, both are Honduran puros and both feature a wrapper grown in Jamastra.

Both Patel himself and representatives from the company told halfwheel that the company decided to bring back the cigar in 2013 after determining that it had enough tobaccos to create the blend. 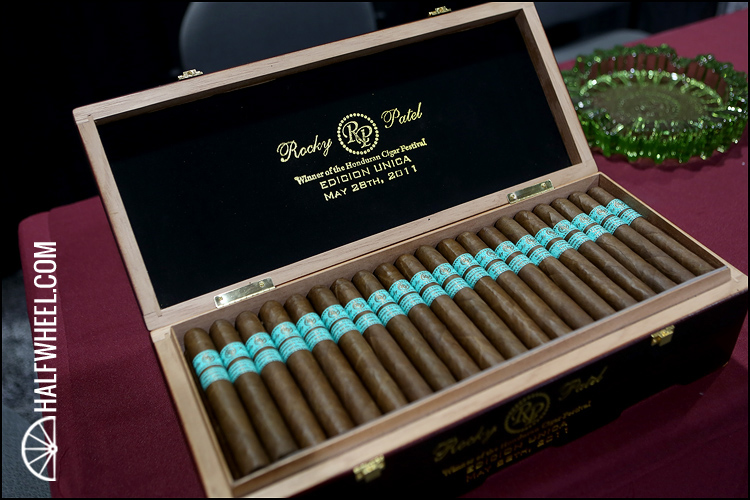 The wrapper on the Unica 2011 is incredibly smooth, an even rich milk chocolate brown color and oily to the touch. There is only the slightest give to the cigar when squeezed with no soft spots that I felt. The wrapper’s aroma is a bright mix of fresh cut hay, a slight bit of vanilla and just a touch of barnyard aroma. Moving on to the cold draw I get notes of rich milk chocolate, a little bit of chili pepper and some sweet tobacco.

Starting into the first third the profile consists of a smokey barbecue note, some cocoa and only the slightest bit of pepper. After about an inch a slight bitter note develops that isn’t necessarily unpleasant, but more like a touch of bite on the tongue. The draw is a little more open than I’d prefer, but it’s not what I would call loose. Holding on to about three quarters of an inch, the ash is an interesting light gray color with a brownish tint to it. The burn could be better and has required a couple touch ups, though it’s not too crooked. Smoke is plentiful when I get it going, but the looser draw requires a little more action to get it there, so it’s a balance between keeping it burning at the correct rate and not hot boxing it.

Moving into the second third the bitterness moves in between a little bite on the tongue and a more unpleasant harshness. The earlier barbecue like notes have developed more into a general woodsy flavor, mostly cedar and oak, with a nuttiness, the previous cocoa and still only the slightest bit of pepper. I’m continuing to have to touch up the cigar here and there as random parts of the cigar seem to lag behind the rest of the burn line.

The final third sees the earlier profile unraveling with mostly muted flavors. The good news is that it’s not as bitter, but the lack of the earlier profile makes for somewhat of a disappointment.. After a couple more touch ups and one relight, the harshness has returned and is overpowering any of the enjoyable woodsy, nutty and cocoa notes, so I decide to go ahead and put it down.

After I finished the review, I went back and read Charlie Minato’s review of the 2011 release. While we each tasted some subtle differences in the profile, it appears the 2013 release suffers from a very similar issue of harshness and bitter notes. The profile underneath is a very solid one that I enjoyed when it was clean. Unfortunately though, the harshness that ended up overpowering it for about half the cigar, combined with the frustrating burn issues, made for an overall so-so cigar. I do believe that with a little bit of rest this cigar could shed the bitter notes and allow the enjoyable flavors to shine. For now however I can’t suggest you buy more than one or two to try for yourself and maybe another one to put away for a little while. In the mean time, I’ll look forward to a possible redux down the line.