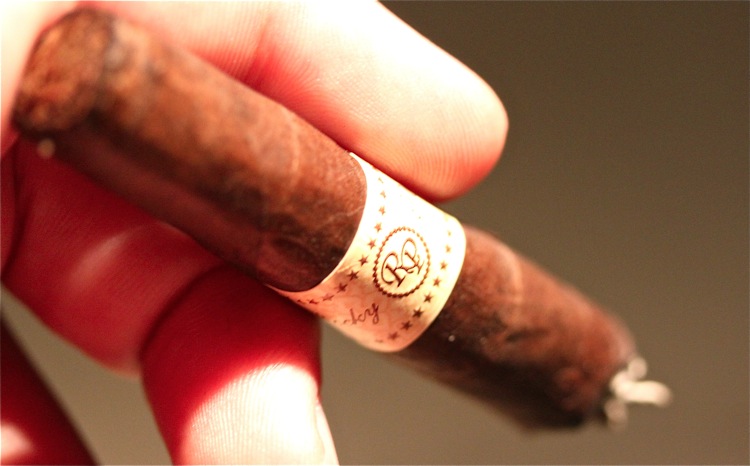 For a lot of smokers, the plethora of new lines and unique marketing tactics of Rocky Patel (particularly in the catalogs), seems to be a turn-off. I’ll admit that I’m really not sure where to start when it comes to the seemingly endless options that Rocky Patel offers. However, even those that don’t consider themselves to be fans of Rocky have little to complain about when it comes to the Decade. Many, particularly those not in the Rocky fan club, seem to consider it his greatest work to date. For me, the Nordings, recommended by Bill Davies of Tobacco Locker given my cluelessness regarding Rocky Patel, remain my favorite. Yet, my expectations for the Rocky Patel Decade Lancero are definitely higher than most would likely assume them at. 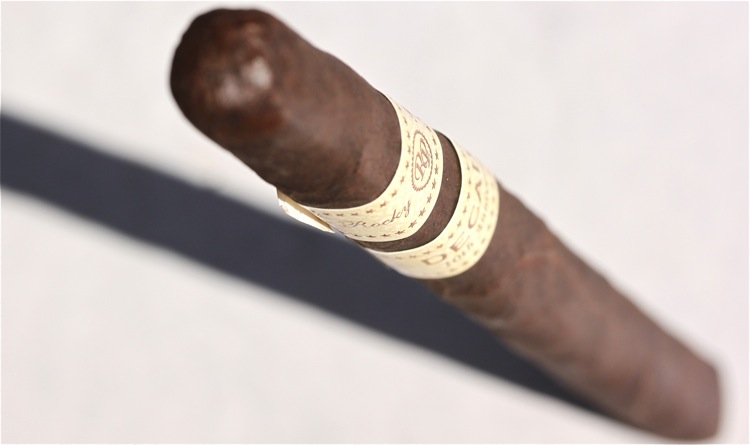 Today’s Smoke
Rocky’s marketing strategies are always exciting. A recent approach when characterizing the Rocky Patel 15th Anniversary seemed to be an us against the world strategy. While I don’t believe everything I read in the Holt’s catalog about what goes on in the Plasencia factory, Rocky isn’t lying about the hardships and difficulties he has had breaking into the culture of the industry. With a few breaks, Rocky went from just another start-up to a major force in the industry. Rather than celebrating his tenth anniversary in business by giving the finger to all those who doubted him, he created the Decade, a cigar that would be the virtual middle finger for all the naysayers. Introduced at the 2007 RTDA (now known as IPCPR) tradeshow in Houston, they were a hit from the start. Each box employs the similar us against the world menatlity with “Against all odds” inscribed inside. While the cigars were good, a 95 rating by Cigar Aficionado took the Decade from “good” to “upping the ante, a few times over.”

When the Tatuaje Tattoo was announced, and the details were finally confirmed by Pete Johnson, the question of “is this the first box-pressed Lancero?” arose. While not the dean of Lanceros, okay, in some circles I guess I am. My first reaction was that Gurkha released a cigar called a Lancero in the form of their Gurkha Micro-Batch Liga TPB-1 for Cigars International, although at 6 1/2 x 44 seems more Lonsdale than El Laguito No. 1. A few hours later, the Decade came to mind as the candidate. However, like many this is a 7 x 38 vitola, so on a technicality, the Tattoo is the first true box-pressed El Laguito No. 1. Anyways, it’s a dark earthy Ecuadorian Sumatra wrapper with light veins. Two simple vanilla bands adorn the box-pressed cigar, perhaps Rocky’s best use of bands. Aromas are fully aged mixture of leather and cocoa at the full scale. It’s soft to the touch despite a consistent tight packing. The foot gives off a straightforward mix of leather, meatiness and spice, seems to be Rocky signature. 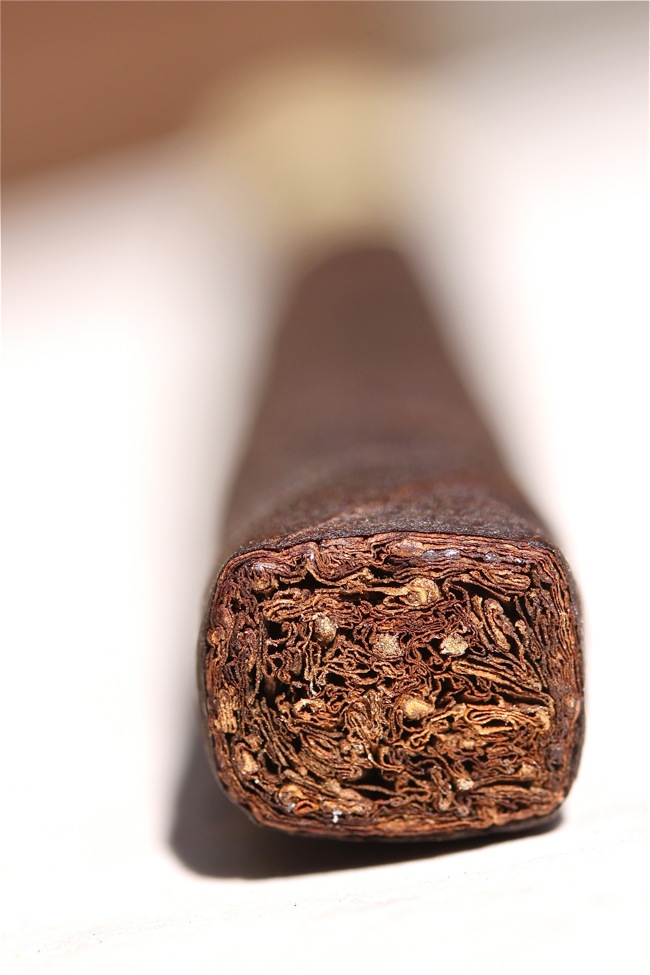 Lighting
After clipping the top, it’s leather, cedar and a bit of pepper, somewhere on medium-full. Cold draw is a bit tight with flavors of earth, dark tobacco, cedar and a hint of citrus. Aromas as the Ecuadorian, Honduran and Nicaraguan are lit are dark cocoa, cedar and a bit of musty earth. It begins with cocoa, then a heavier cedar and spice, lots of earthy spices finishing the cigar. 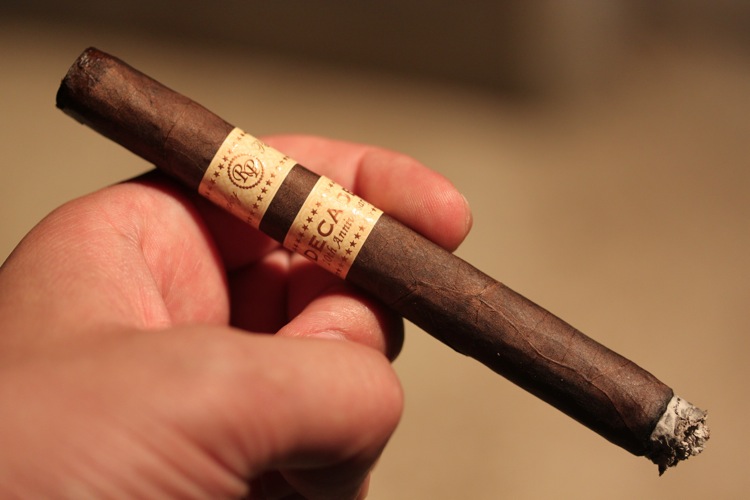 First Third
There’s a sweet darkness to the overall flavor profile of the Rocky Patel Decade. Dark tobacco, mild cocoa, earth are joined with pepper to create a rather enjoyable flavor. It’s full and to the point, still containing quite a bit of complexity despite the direct nature. Finish is cocoa, earth, cedar and spice, full and medium in length. While the draw is fine and the burn is straight, the Decade Lancero consistently was plagued by an inability to stay lit, even in the first third. Strength is medium-full at the beginning with a subtle rise from the start.

Second Third
It’s much of the same… Most of the Decade vitolas seem to be more about subtle changes, rather than a complete change in flavor. A bit more earth with an added cedar note over the tobacco and cocoa. Finish is much of the same with a bit of grassiness sweetening the flavor profile. Smoke production is moderate through the entire smoke, a dark cedar profile for the air, nothing overly surprising. Strength is slightly into the full range by the halfway point of the Rocky Patel Decade Lancero, but it seems to stall (for the better), at that point. 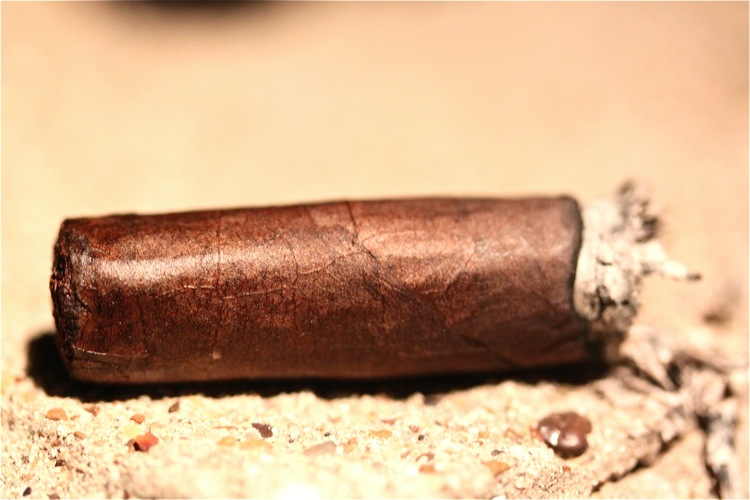 FInal Third
The construction issues plague the final third a bit more than the rest of the cigar, which is unfortunate. To be honest, I originally expected the cigar to fall apart flavor-wise, as many of the cigars that are of a relatively similar flavor profile and have problematic construction tend to do that, but it didn’t. It’s still a full dark tobacco, earth and cedary note. Sweetness comes from chocolate, which is now milky chocolate, citrus and some of the earth notes. A spice is easily one of the top two strongest notes, recognizingable a second or so after the smoke hits the palate. Finish of the Decade adds some herb and a bit less pepper, but still tasty. Eventually, with all three Decades I’ve smoked, the cigar had to be put down, too many relights. 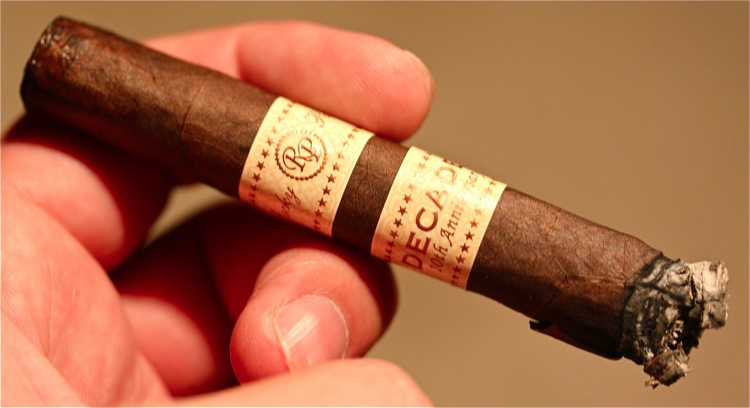 For the Novice
Nicotine-wise this is a bit too strong. It’s a great smoke when it stays lit, but that is the Decade Lancero’s problem. Rocky Patel makes plenty of other cigars (cue laughter), and plenty for the novice, this just isn’t one of them. If you are just starting out and have had your fair share of Rocky’s and now progressing to a bit more experienced of a palate, wondering if there are any Rocky Patel products that can stay in your rotation, this is the line to look to. 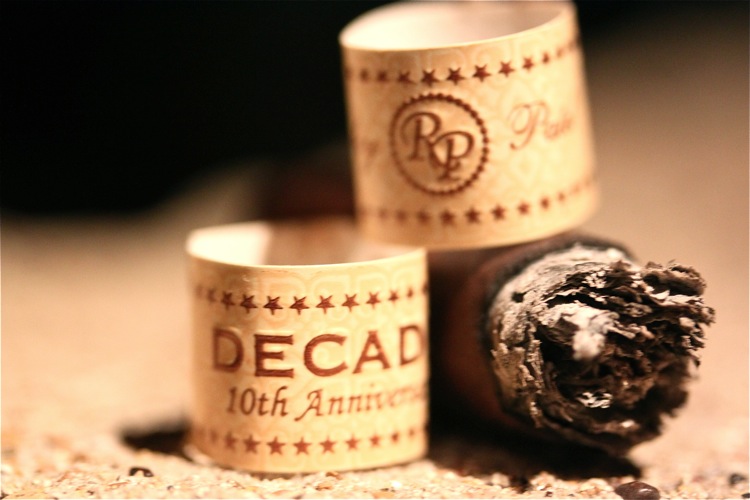 In the End
For Rocky Patel fans who need to defend their beloved product against the sea of haters, the Decade is the cigar you point to when people argue about the quality of product Rocky produces. Unfortunately, the Lancero is not the best vitola in terms of construction, which negatively impacts the flavor, as well as the overall experience of the cigar. Other vitolas have shown consistency and quality over time, enough that it’s worthy to make this a notable try for any smoker. Without a doubt the price tag raises the bar, however, for the most part Rocky’s Decade answers the challenge.

Site sponsor Tobacco Locker has free shipping on a price that is already about the lowest you’ll find.