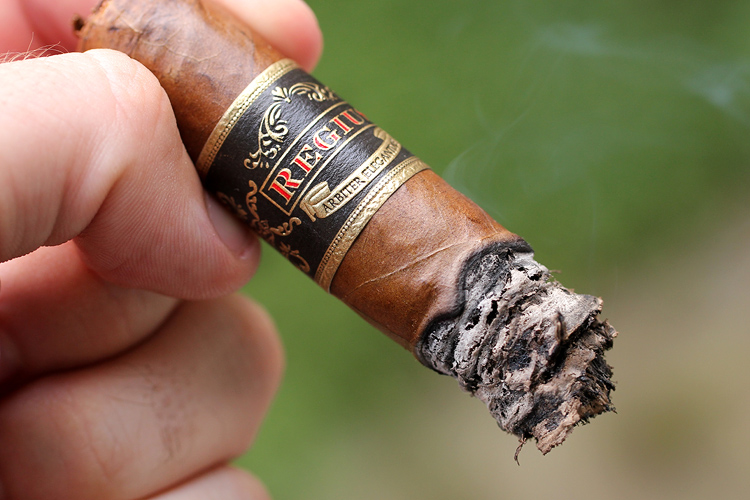 London has earned its place as a hotbed of cigars, due in some part to retailers who can trace their roots back some 200 years and an affluent population who can afford the luxury. But what it hasn’t been known for is being a home to many cigar manufacturers, and for good reason. It’s not a tobacco growing region, it doesn’t have the same population as say, South Florida—and of course—they don’t have an embargo against Cuba and its cigars.

However, that didn’t stop Akhil Kapacee and a group of colleagues from launching Regius Cigars in 2009. It has been a slow but steady climb for Regius, with the last year or so seemingly their most expansive. They signed a distribution agreement with Manuel Quesada’s SAG Imports and spent the past two IPCPR trade shows as part of the SAG Imports booth which greatly increased their exposure.

At this year’s trade show, the company introduced a pair of new releases that were created in partnership with Mitchell Orchant, the UK cigar retailer with a range of shops both in the city and in Scotland, Germany and other locations. Orchant’s collection of stores includes the legendary Alfie Turmeaus Tobacconist in London’s Mayfair district, a store that first opened in 1817. It was bought by Orchant’s C.Gars Ltd. in 2003 and remains open to this day.

Orchant and Kapacee’s friendship can be attributed to a man named John Darnton, who had been a Director of Hunters & Frankau and a long-time colleague of Orchant’s. Darnton is the London representative for Regius, and as such brought the two men together. Orchant said that there are “few people in the cigar industry that I respect more than John and when he asked me to support the brand I was more than happy to oblige.”

The project was discussed over many months, with the details finally being agreed upon in December 2012, with several months of sampling and tweaks, the Regius Orchant Seleccion was agreed upon and Orchant said it is “a blend of merit that we are both proud to put our names to.” The goal for the blend was to find a balance between medium strength and full sweet flavors, a challenging process according to Orchant, and one that he thought would take longer than it actually did.

Kapacee describes the Robusto blend as “classically Cuban” and told halfwheel that the cigar was crafted to be “akin to the Partagás Serie D No.4.” While it remains a Nicaraguan puro, it is billed as being a bit fuller bodied than the rest of the line.

As for the Seleccion Orchant designation, it isn’t a new idea, as the retailer has been offering hand-selected Cuban cigars via his UK shops that represent “the finest examples of brand, vitola and vintage” for some time. He selects a band and size of choice with the assistance of Sean Croley, Director of Hunters & Frankau, then a factory and date code, and then he checks the wrapper color and condition of the cigars, pulling samples from four random boxes of a mastercase. If he finds those cigars to be what he describes as a “blend of merit,” Orchant releases between 32–64 boxes of them.

The cigars that are selected get a secondary band very similar to the one on this Regius offering as well as an additional box sticker denoting their status. Currently, he offers cigars from Juan Lopez, Partagás and Quai D’Orsay that bear the Seleccion Orchant designation, with previous selections including cigars from Ramón Allones, Bolívar, Sancho Panza, El Rey del Mundo and Punch.

With this limited edition, the Regius Black Label line stands at eight offerings:

This limited edition Robusto was one of two new offerings from Regius that involved Mitchell Orchant; the other was the Regius Culebra mentioned above and pictured here. It’s the second Culebra produced by the company, as they made a store exclusive for Winston’s Humidor in Midlothian, Va., which Brooks reviewed here.

There will be 400 boxes of the Regius Seleccion Orchant produced, but only 200 will end up in the US, with the rest going to Alfie Turmeau’s Tobacconist in Mayfair. 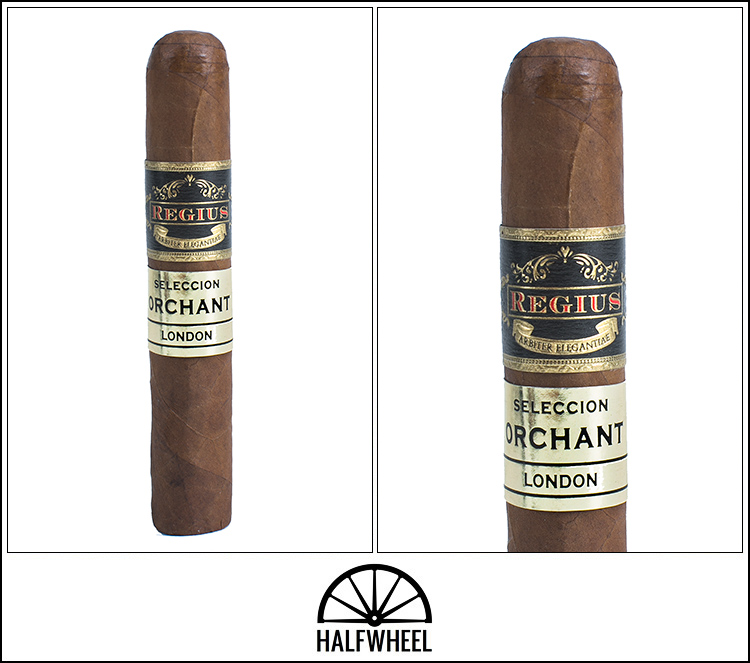 For such a compact cigar, there is plenty of band on it, with the two bands taking up about two inches of space. Underneath those bands is a very smooth wrapper that is just a bit past medium-brown with a touch of oil and just a few veins. The cap on the first cigar was notably off center, while the other two were applied much better. The pre-light aroma is light, with varying notes of grass, white toast, cereal grain, hay, graham cracker and brown sugar, along with the faintest amount pepper. The cold draw is smooth – not too easy, but no real restrictions with very mild flavors that lean towards cereal grain.

The first puffs are mild-plus at best with a bit of dry tang on the lips and front of the tongue, but otherwise very mellow flavors. Through most of the first third of the Regius Seleccion Orchant, flavors stay fairly mild, with a bit of creaminess and a good amount of white pepper that is found primarily in the retrohale and ambient smoke. Neither the volume or body of the smoke are lacking in any way, and the burn line stays sharp for the first inch before beginning to get a bit wavy. The ash is dark gray and not very tight, as evidenced by its loosely woven structure that shows the orange glow of the cigar’s combusting core. 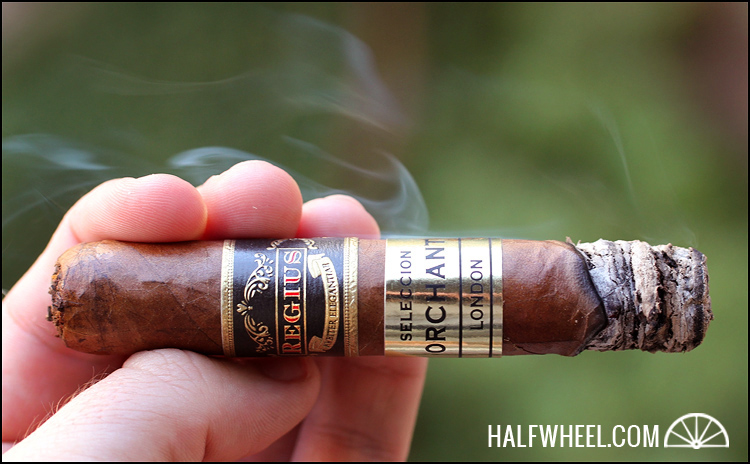 Strength picks up in the second third of the Regius Seleccion Orchant, though given where the cigar started, it isn’t much of a surprise. Cereal and grain notes dominate the flavor and start to bring about a sharper, more pronounced flavor, as the cigar has done away with the pleasantries of the first third and wants to move into the real flavors. The tobacco still isn’t very flavorful, yet it has significant body and a good bit of pepper with a dry flavor led by earth and wood. 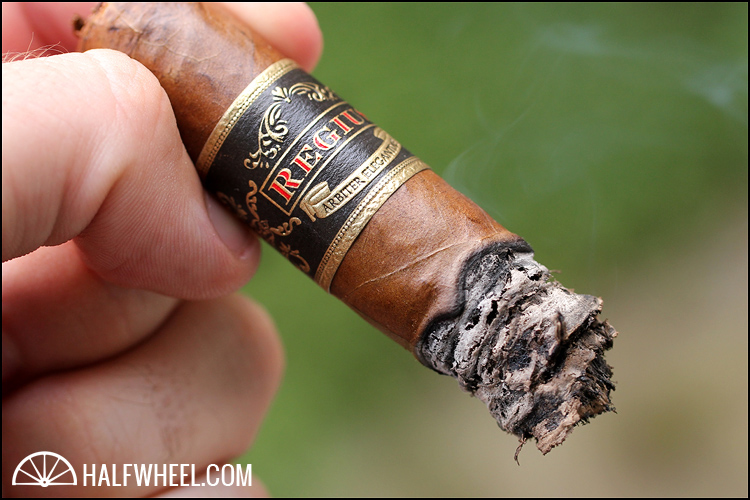 The draw firms up just a bit entering the final third of the Regius Seleccion Orchant and the smoke heats up a bit as well, with a slightly charred note starting to come out as an extension of the dry wood that has been a consistent note in the second half. There is a good amount of pepper in the nose and lots of smoke volume, with the cigar picking up just the slightest bit of bite at times. The final third is by far the most flavorful section of each cigar, though the strength and flavor varies seems to vary a bit from cigar to cigar. 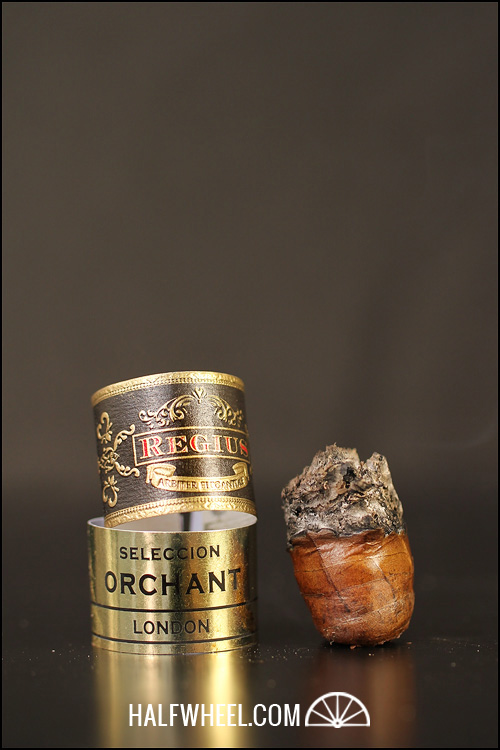 The thing that sticks out the most about the Regius Seleccion Orchant Robusto LE is how they varied in strength from one to the other, and coincidentally went up in strength in a manner that corresponded to the order I smoked them. It's one of the milder Nicaraguan cigars I can remember having, though it does develop into a respectable medium-minus to just shy of medium. While I never want to knock a cigar for being mild, I can't help but deduct points for a cigar lacking in real flavor, which the Regius Seleccion Orchant does at points. It does develop some strength and flavor, though with the varied levels I experienced, I'm not terribly sure which one was the real profile. Given the comparison to the Cuban Partagás Serie D No.4, I can't help but find the Regius Seleccion Orchant a bit of a disappointment.