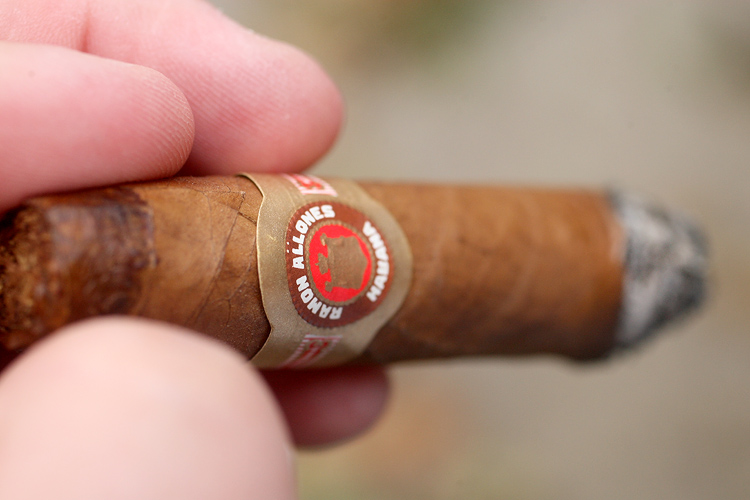 In 2005, Habanos S.A. released a limited addition Ramón Allones Belicoso that was only available in the United Kingdom. This release was actually before the Edición Regional program was in effect, so while this release is essentially one of the first ERs, it is not officially labeled as one. In fact, there was almost no fanfare at all when these were released.

In 2005, Habanos S.A. introduced the Regional Edition (Edición Regional) Series.The ten worldwide premium Global & Niche brands are excluded from this series.  This leaves the seventeen local and multi-local brands for these regional editions.  As these brands are not promoted worldwide, this series was seen as an ideal marketing method to promote them.  Despite this criteria, in 2007 a previously unheard-of brand, Edmundo Dante (a de-facto Montecristo) was released for Mexico.The series comprises special limited production cigars made exclusively for a regional market, and are available for a one or two year period.  After this, Habanos has the right to add this cigar to the current production range.  The cigars must be selected from current production vitolas that are not already available in that brand.  Some of the newly introduced vitolas from the premium brands are also excluded.Each release is initiated by the Regional Distributor, who under-right the setup costs. Some distributors have elected to reissue in the second year.  Reissue cigars are identical but the box leaflet may have a statement “Its great acceptance encourages us to present this edition again…” or similar, depending on the country of distribution. Regional Editions currently now have a lifespan of 12 months, and have a minimum run of 25,000 cigars. They are usually released in August, September and October of each year.From 2012, it is reported that there will only be one Regional Edition per Distributor.

The U.K. distributor, Hunters & Frankau had the 5 1/2 x 52 Belicoso size made in the Ramón Allones brand specially for its market. There were an unspecified number of boxes of 25 of these cigars released and unlike almost all preceding Edición Regionals, there are no secondary bands. In fact, there is nothing at all about the cigars outward appearance that signifies it is special in any way, other than the vitola, which has never been a regular production size in the Ramón Allones marca.

Here is what the boxes for the 2005 release of the Ramón Allones Belicosos look like: 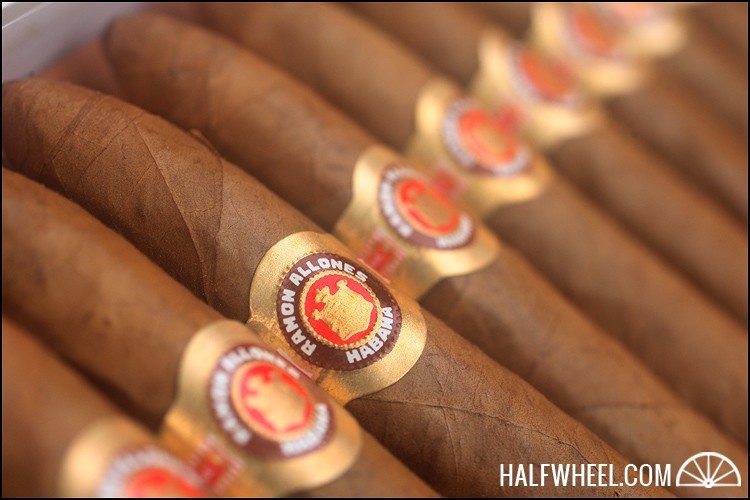 The Belicoso itself is a excellent example of a perfectly made Cuban cigar. It has a gorgeous milk chocolate brown wrapper with just a bit of oil present, but is fairly dry to the touch and has the perfect give on the obvious box-press when squeezed. The wrapper smells strongly like a combination of cedar, barnyard, manure and chocolate.

The first third of the Ramón Allones immediately starts off with strong flavors of coffee, sweet cedar, earth and nuts. There is also a bit of black pepper on the retrohale and a touch of spice on the tongue,  enough of both to keep things interesting in that department. There is also a sweetness in the background, that at various points in the third feels like it is trying to break through. The Belicoso has a very dry profile, but the strength is virtually nonexistent by the end of the first third. Draw and burn are both perfect, and I don’t see that changing anytime soon. 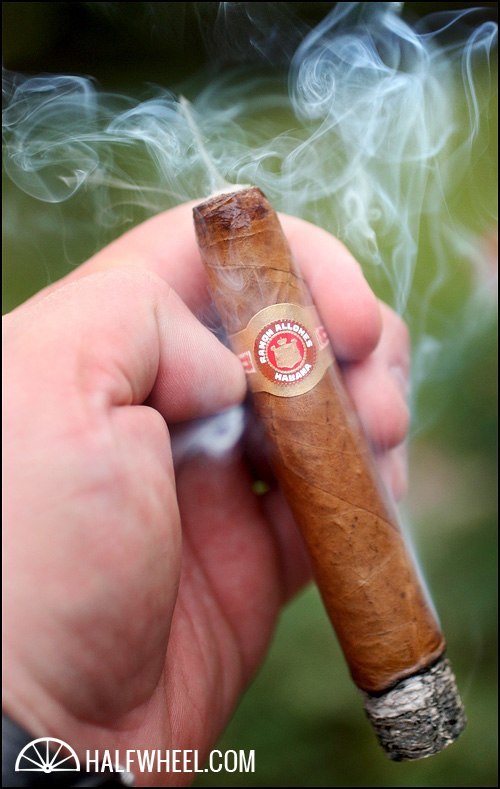 Coming into the second third of the Ramón Allones Belicoso, and the profile keeps the cedar and nuttiness, loses almost all of the pepper, but really ramps up the sweetness. It tastes like caramel to me, a wonderful, rich note that goes almost perfectly with the nutty flavor that has also increased in intensity. The strength is a solid medium at this point and does not seem to be increasing at all, and construction remains excellent in every way. The final third continues the roller coaster of flavors for the Ramón Allones Belicoso. Although the sweetness has died down quite a bit, it is still present, just not as strong as the second third. There is a bit of a floral note along with amazing flavors of espresso, cream, earthy spice and nuts. Construction ends as it began, perfect, and the strength finishes  at a solid medium. I am able to nub the cigar very easily, and there is no harshness to be had no matter how far I smoke them down. I have made no secret of the fact that most of the recent Edición Regionals have disappointed me, oftentimes because they just seem to be boring and somewhat bland examples of cigars, both in flavors and profiles. These sticks from 2005 are quite a bit sweeter than the classic Ramón Allones profile, but it seems to me that they take the normal Ramón Allones profile and complex it up quite a bit. Wonderfully rich and complex flavors, and excellent construction makes the Ramón Allones Belicoso UK release not only easily one of the best Edición Regionals, but also one of the best Cubans I have had in quite a while. These are worth the price that are paid for them all day long, and if you are looking for a classic Cuban in the making, look no further.