It would be wrong to refer to the Quesada España as “legendary”, but it has without a doubt reached mythical status. Part of that has to do with the limited nature. Part of it has to do with the blend profile and its distinct reminders to Havana. But at the end of the day, a cigar, is a cigar, is a cigar. And a good cigar, that’s almost always what matters. I’ve been smoking Españas since late March, but, despite my request, Quesada doesn’t make a Selección España Lancero, so I just haven’t gotten around to reviewing these. In February of this past year, Manuel “Manolo” Quesada, head of the SAG Imports/Quesada/MATASA (makers of a lot of brands including the Dominican Fonseca and partners with the Plasencias on Casa Magna) made a mistake.

At the annual ProCigar Festival, cigar enthusiasts, retailers and makers were given a chance to sample a cigar that was to be made only for Spain, the Quesada Selección España. Three sizes using a peculiar blend that includes an Ecuadorian Arapiraca (a tobacco normally native to Brazil) wrapper over Dominican and Nicaraguan fillers.

See the problem was the cigars were good, really good. A few Quesada accounts got ahold of some of the unreleased cigars and liked them, a lot. Very quickly, a cigar that was only supposed to be released in Spain was being demanded amongst the top Quesada accounts in the U.S., and by March, the Españas were stateside.

There are a lot of explanations as to why the España isn’t supposed to be offered in the U.S., one of them is the formats: Corona (5 1/2 x 42), Robusto (5 x 52) & Short Robusto (4 x 50). Quesada believes that the sizes, combined with the pricepoints (which are a bit higher than your typical stick) are not conducive to the U.S. markets. They are however competitive in the Spanish market, where Cuban cigars are legal and dominant. Still, given the requests, Quesada has given a handful of U.S. accounts access to a few boxes a month, but it’s rather limited and the plan is to keep it that way.

The Ecuadorian Arapirca has a somewhat dull brown hue, with average amount of veins. The only difference between the pre-production and regular production cigars is the second band, which earlier ones were without. It’s odd, on my box the bands never aligned correctly, it doesn’t seem to be a widespread problem, but it’s something you make note of. The simplicity of the large Quesada logo, over to rows of smaller renditions (along with the color scheme) creates a Behike like feel to it, or at least to me. Aroma from the España’s wrapper is a very sweet chocolate over some cedar, earth and a bit of leather, full and deep, but mainly just sweet cocoa. It’s an above average roll with great distribution and consistently, a bit soft to the touch, but no concerns. For whatever reason, the Coronas seem a bit rougher than the rest of the Españas, but it’s still above average at worst. The cedar picks up a bit on the aroma of the foot of the Quesada España, but it’s still largely sweet cocoa with a bit of spice making its way into the profile. I haven’t found which cut I prefer on the España, but this time it’s my traditional v-cut. Aroma from the top of the Corona is a more balanced profile with the sweet cocoa still mainly up front, but there’s an increased amount of spice, harsh leathers and earthy tobacco. Cold draw is similar, the cocoa no longer miles in front, coffee and raisins are the only things that stick out from an earthy sweet (caramel) core that’s underneath the cocoa, full and balanced. Lighting produces some dark smoke outside that smells of peppery cedar and a chocolate tobacco mix, although it’s not one of those notes I would necessarily associate with pipes. First draw is average in tightness, with a blast of sweet cocoa and pepper bittering as leather, earth and cedar (in somewhat random orders) slowly join the party before an aged tobacco and herbs show themselves on the spicier and average length finish.

It’s not a pepper bomb, but pepper starts the party up top. Eventually it dies down and let’s a cedar and sweet leather battle it out up front. Below are raisins, cocoa, earth, the aforementioned pepper and a bit of red wine here and there. Finish continues the fullness with the pepper coming off the tongue and entering all portions of the palate (although not exploding on retrohales) and coffee making a more noticeable stake. Smoke production is good as the draw remains open. I seem to need to puff at a rate that equates close to 45 seconds, a bit quicker than average, and noticeably faster than what yours truly normally smokes at, but otherwise the Españas seems prone to going out. The difference between the young Españas and the slightly older Españas become apparent pretty quickly into the second third. Two inches in, everythingdeepens. A deeper cocoa, a deeper pepper, a deeper coffee and a deeper leather. The addition of a walnut note doesn’t hurt either. It’s still full and with the bit of extra time, flavors are just unbelievably good, and clean. While I would have appreciated the raisins and some of the tobacco, the generic sweet earth mixture that gets left over on so many cigars is completely gone, which is a welcome change. Finish adds a bit more pepper with even less cocoa, still not terribly long. Strength is medium, where it was in the first third, body is on the lighter side of full (smoke good be a bit denser), but that’s not what you focus on here.

And then there’s the creaminess. You wouldn’t really think that there was much to add, but as the end nears a creaminess appears (a bit later than on the Robusto and Short Robusto) and everything gets tied together. The last third continues the relative activeness with an odd lemon floral note on the finish, but it’s mainly what’s above: cocoa, pepper, coffee, nuts, leather and a return of the tobacco. Construction remains the same, although the ash does seem to occasionally become seamless, as is above. Once again, not really something I’m spending much time fretting over.

Err… no. Strength wise this is fine, but there’s just too much going on. I guess this falls in the: if you see them, buy them and let them sit until you are ready. These are a great cigar for most any smoker, but appreciation comes with experience. I will say, if you find them, buy them. 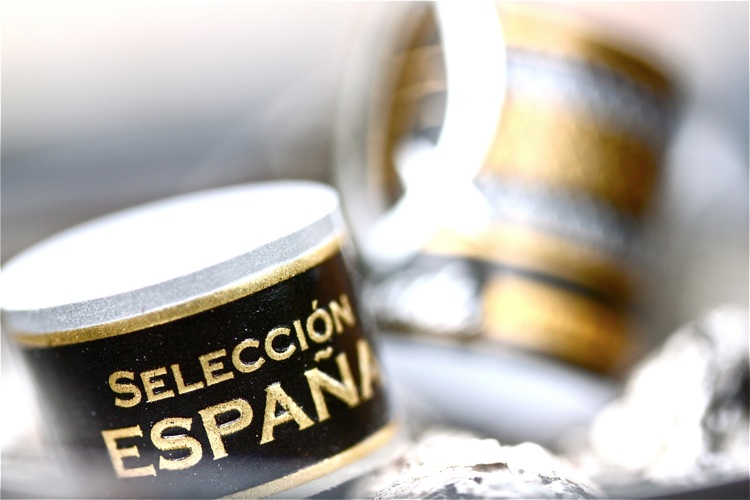 The folks at Quesada are fighting one of the most peculiar battles in the cigar industry. As much as it helps to market the España, there isn't enough to go around (in the U.S.) and as such, there's a limit to building the hype. (The other large problem is Quesada doesn't want to expand these to anymore accounts, as they simply don't have enough given Spanish demands.) It's odd, but it's something they actively face, particularly given the response to Spain's Quesada in the U.S. And then there's the Cuba problem. While it definitely helps to market the España for its similarities to Cuba (particularly in the U.S.), it's problematic as it overlooks the España for what it is, a very good cigar. It's not the most complex non-Cuban cigar on the market, it's not a mirror replica of Havana's finest; but it's reminiscent. The España has the tamed boldness, balance and character that feels Cuban, and for that, it deserves the escalades. It's a good cigar, a very good cigar, but it's still rough around the edges, it still needs more time and it will get better. The improvement in a month has been remarkable, and that's saying something; six months? That could just be unfortunately good. Improvement in flavor and a deepening balance are going to persist for a while; but, (complete speculation here) I do believe there will be a (short) window in the future where the Quesada Selección España will be simply sublime.