In December of 2011, SAG Imports/Quesada announced a new project that would be the company’s first cigar solely created at Quesada’s new factory and an effort to raise awareness for cigar rights. Manuel “Manolo” Quesada’s company would create the q d’etat line as a way to protest increased restrictions on cigar smoking and higher taxes for the industry. The first size was aptly named, Molotov.

December 8, 2011 — The Q d’etat line represents a symbolic revolt against the unfair taxation practices and mistreatment of the premium cigar industry.  The brand is intended to create awareness of the dangers increased government regulation and taxation will produce, specifically the FDA’s desire to regulate premium cigars. There will be three sizes, released at different dates, of 1,000 ten-count boxes.  Each box will contain a form to register for membership in Cigar Rights of America.

The first of the three sizes is a figurado called the “Molotov” and will be released in January.  We chose the name because the term was first coined by the Finns in reference to the cocktail bombs they utilized to fight against Communist oppression from the Soviet Union during the Winter War in 1939.  When the Soviet foreign minister Vyacheslav Molotov falsely claimed Soviet planes were dropping bread baskets and not bombs over Finland, the Finns began to refer to the bombs as Molotov Bread Baskets and responded by naming their own improvised incendiary devices Molotov cocktails, joking that they needed a drink to enjoy with the food.

We chose Dec 8th, 2011 to issue this press release because it is the 20th anniversary of the dissolution of the Soviet Union.  Shaped like a Molotov cocktail measuring 5 x 38/58/44, this cigar is a great size for the thousands of us who will have to smoke outside in the freezing cold this winter because of draconian smoking bans that prevent us from enjoying a cigar indoors at our favorite bars, restaurants, and, oftentimes, even cigar shops.

Wrapper, binder, filler are all Dominican.  MSRP for the Molotov will be $7.95

Quesada shipped the Molotov to retailers on February 8, 2012 and the cigars went on sale this past Thursday. 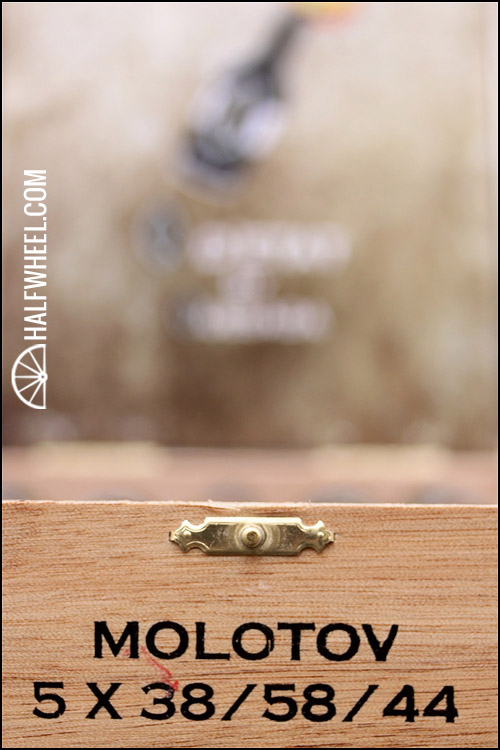 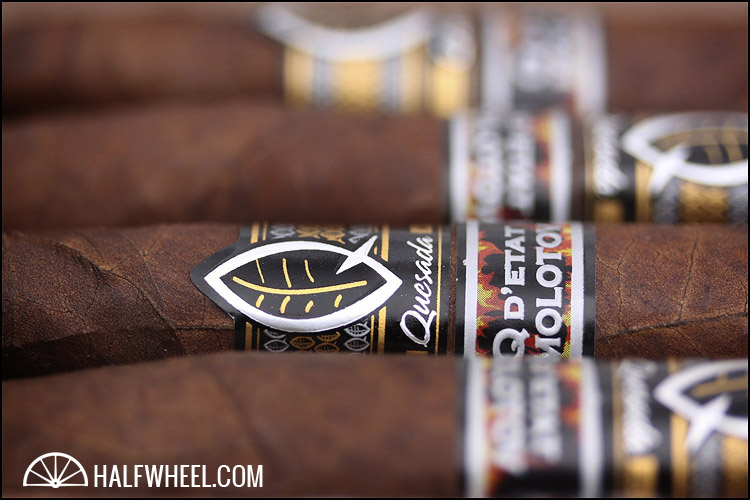 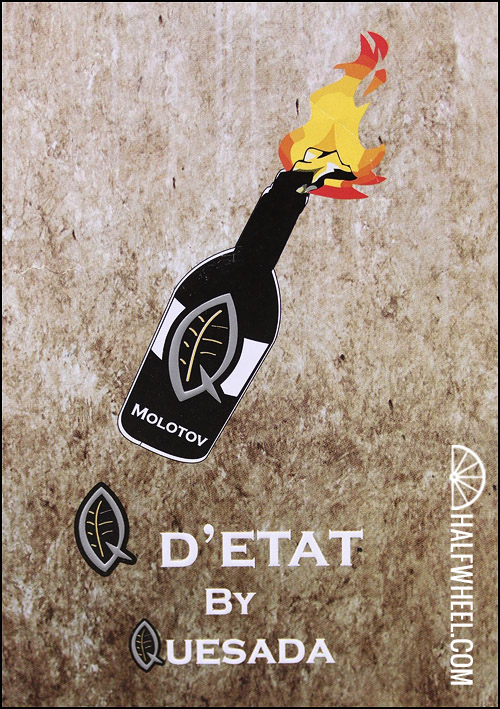 At the top of each box is a card to sign up for Cigar Rights of America. 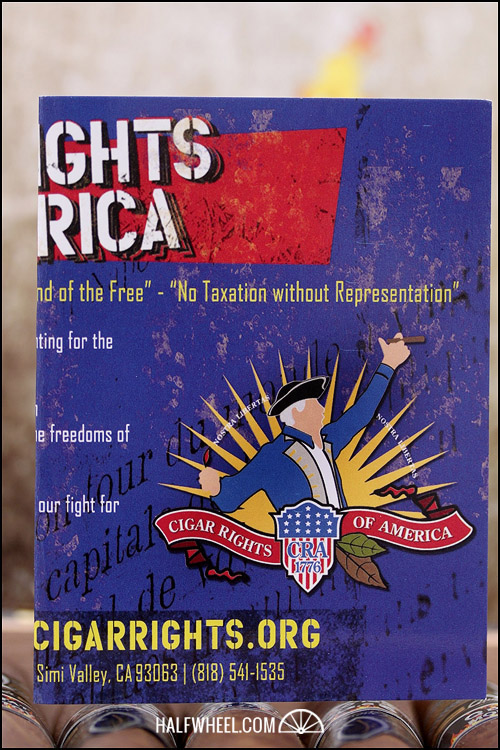 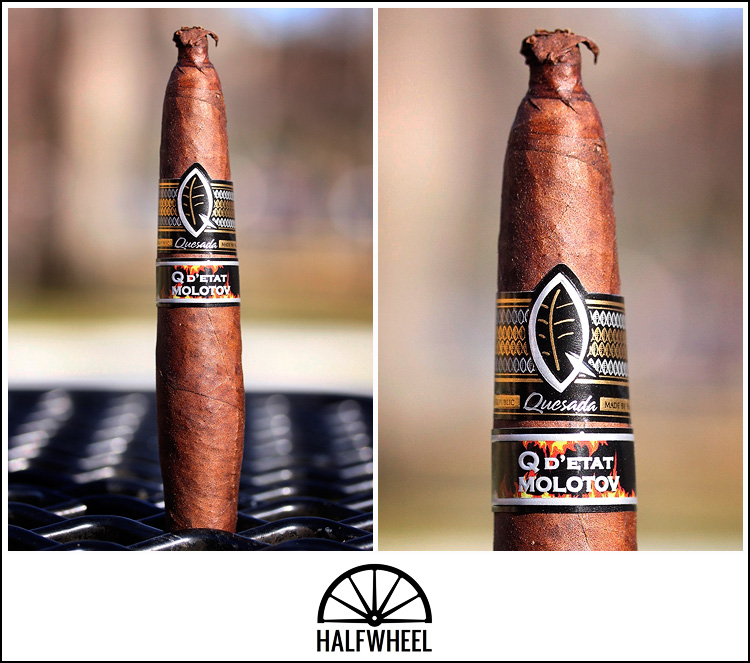 The Molotov has one of the weirdest shapes I’ve ever seen in the world of cigars. Even beyond the unclosed cap at the top, it’s just weird. The good news is that it’s a pretty clean roll and a solidly packed cigar. From the dark Dominican wrapper I get a fairly pungent and acidic aroma, whereas the foot is more earth and chocolate. Cold draw doesn’t help the normalization process as the Quesada gives off a very sweet orange aroma, some underlying spice, vanilla and harshness at medium-full. Unfortunately, aroma from the wrapper is easily recognizable while taking a cold draw. That encourages the lighting of the cigar, which produces a pretty typical toasty note from the Dominican puro.
It starts with cedar, earth, bits of leather and fruit on the medium finish. There’s not much pepper at the beginning of the first third, but that quickly changes. Once it settles down the profile is a lot of layered cedar, pepper on the throat and some earthy notes. There’s little in terms of flavors and there’s not an overwhelming amount of complexity, but the Molotov is in your face. Unfortunately, the burn struggles to stay straight pretty early on, nothing major, but obviously a concern given my lack of experience with the shape. 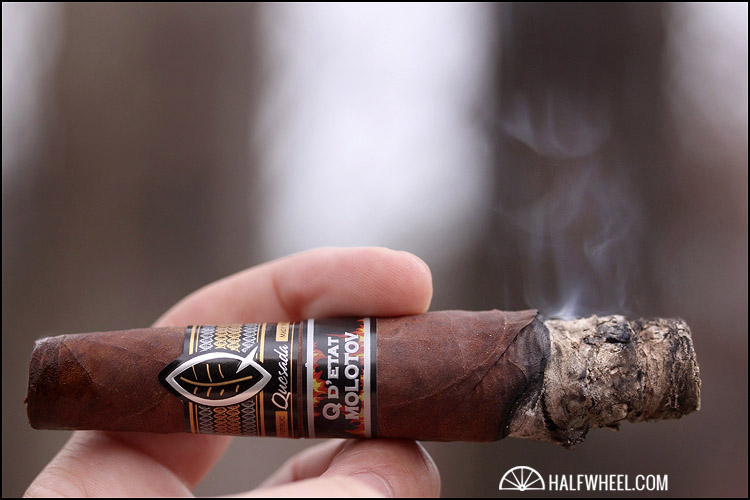 The second third sees the pepper temporarily amp up before dying down. Overall, the cedar gets a bit sweeter and fruits on the retrohale help the process, but the flavor profile really doesn’t change much with the only other addition being a hint of dry cocoa. The strength is still medium, which isn’t much of a change from the first third, but the Molotov definitely tones itself down a bit in terms of being in your face. 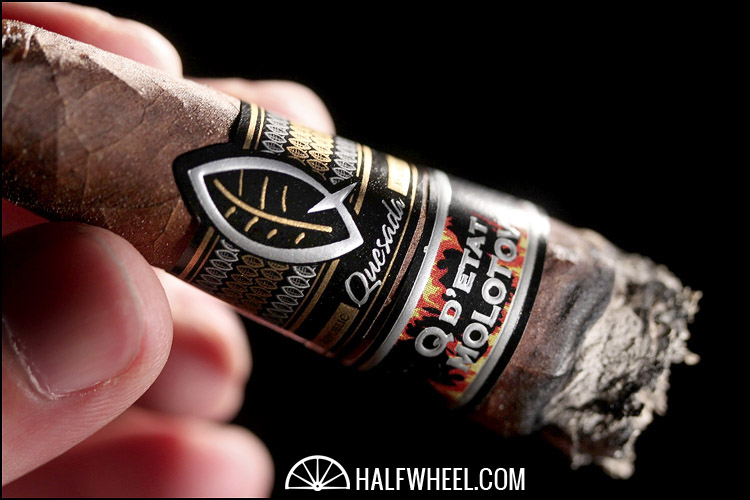 By the time the final third comes around, I’m a bit mystified at how slow the Molotov burns, but nonetheless, interested as to if the flavors are going to change. At this point, the cigar will only narrow in terms of size, almost looking like an ice cream cone. In the end, there’s a bit of changes, but it’s still cedar at the core, some black pepper and a bit of fruits. With an inch left, the cigar definitely begins to go, and I let the Molotov go out. I previously have proclaimed that 2012 was going to be a rather important year for Quesada. While the Molotov is definitely is a much different direction than the products that have come from Quesada, I'm not necessarily the largest fan of it. The in your face nature of the flavor profile is interesting, but for me, it doesn't work. Still, this is a cigar that many will enjoy and I imagine most will enjoy more than me. Yet my largest gripe has to do with the burn rate, which for me is just too slow. A good cigar, but one that makes me want to try the upcoming two sizes of q d'etat more than returning to another Molotov.