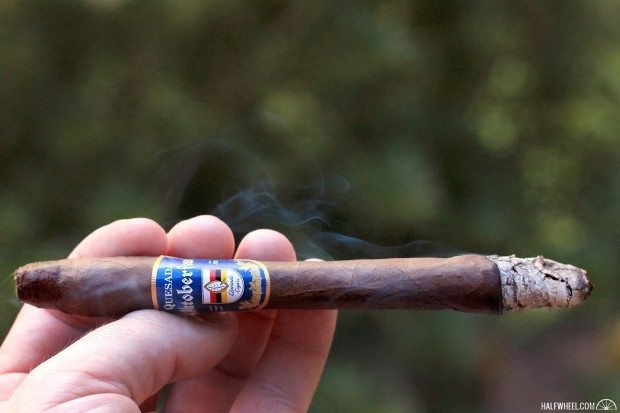 Now in its fourth year, the Quesada Oktoberfest returns with both a new look and a new shape, though the latter is reserved for events while the former is being applied throughout the line. The Quesada Oktoberfest Salomon Press becomes the 10th vitola in the line and the second cigar to use what is one of the most distinctive vitolas you will find in any humidor.

If the vitola looks familiar, it’s for good reason as it made its debut as part of the Quesada 40th Anniversary line released in late April. When Quesada first announced the Salomon Press as part of the Q40 line, the company described the origins of the unique shape: As mentioned above, it’s the 10th vitola released for Oktoberfest, joining six regular production sizes, an unnamed event-only size from 2013 that has since been discontinued, a vitola called the Dunkel made for Smoke Inn’s Microblend Series (TM), and a store-exclusive lancero for Binny’s that was made as part of a raffle held at the 2013 IPCPR Convention and Trade Show.

For the past two years, Quesada has raffled off a chance for retailers to order a custom cigar of their choice from the company’s lines. This year, rather than choosing an all-new size, Cigar Emporium of Lyndhurst, N.J. chose to receive the Quesada Oktoberfest Salomon Press in 20-count boxes. For everyone else, the cigar will come in either samplers or in five-count boxes at events. Production numbers are relatively the same as 2012 with only a few changes: Kaiser production is up to 750 boxes from 250, the 5 1/2 x 56 event cigar is no longer offered and the Salomon Press has been added. 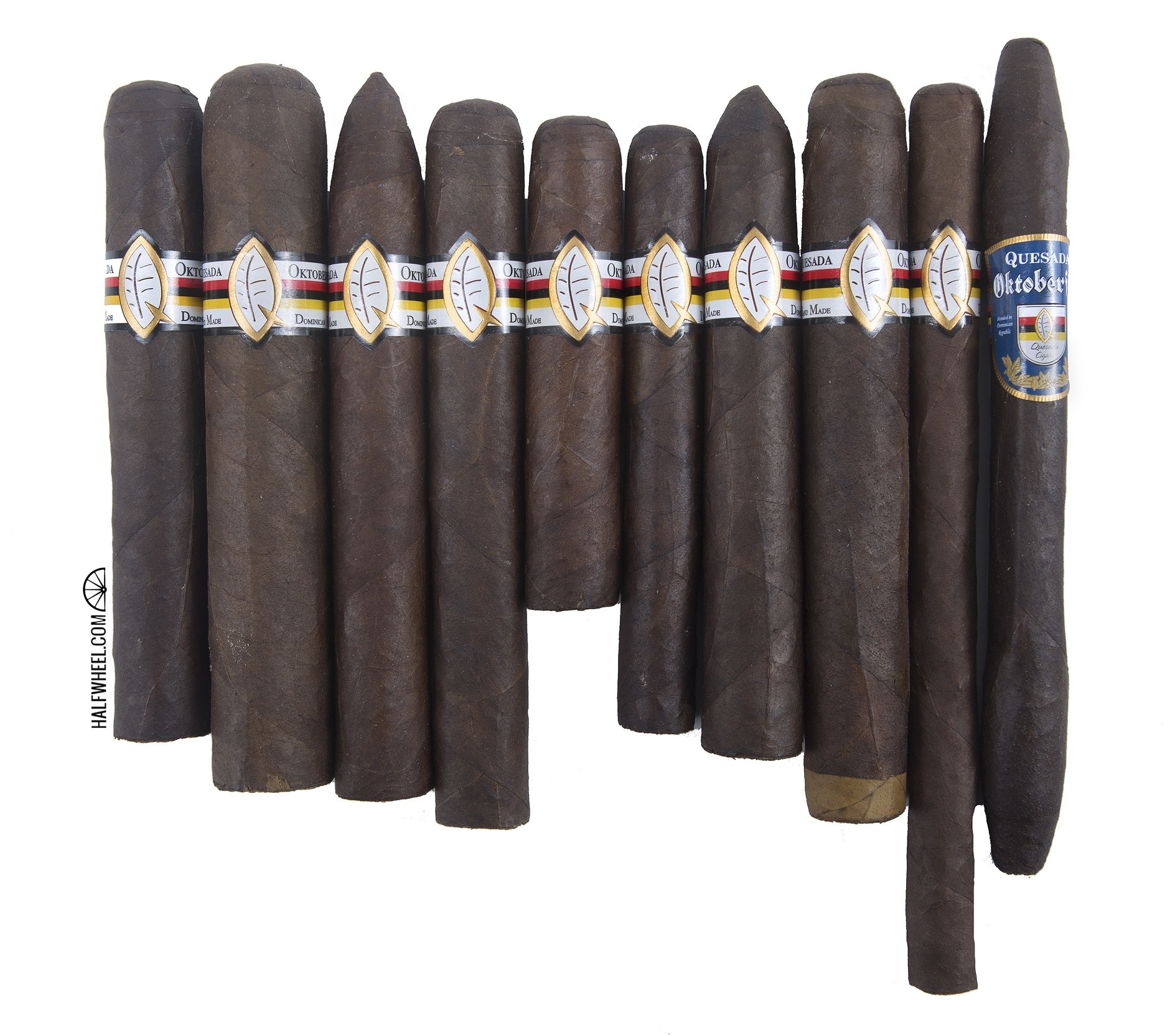 *Notes a limited edition size not part of 2014 production.

To go along with the new event-only vitola, Quesada decided to update the bands, largely to help retailers and consumer differentiate between years. As you might know, the Oktoberfest is only released once per year—generally starting in August—so the cigars will be ready to coincide with the event for which they are named. That all said, it’s worth noting that there is no year on the band other than 2011, when the line debuted, so don’t expect to throw these in your humidor without adding a secondary band or noting down that this color scheme was from 2014. The boxes, however, do make mention of the year. I guarantee you that unless you knew exactly what this cigar was that you could not look at it and think it had gotten squished somehow. It’s a bit distracting even to handle it, as what you are used to being there in terms of physical form simply isn’t. I’m also a bit surprised by just how sharp and visible the press points are, which further suggest that this is a wildly unique design or something happened to them along the way. A rich chocolate brown wrapper with a pronounced vein structure and a decent bit of tooth; the wrapper has a velvet texture that provides a  soft tactile sensation to the fingers. There’s a fair amount of give in the cigar from top to bottom, enough that in a standard vitola I might be a bit wary of just how well-filled it is, but with this unique shape I’m inclined to think it might dictate just how the cigar gets bunched. The pre-light aroma leans to the nondescript side, with the subtlest suggestions of red pepper flakes off the foot and kettle corn from the wrapper. The cold draw is a bit firm, likely due to the small head of the cigar more than anything as air seems to be moving fairly freely before getting forced through a small opening. The cold draw flavor are fairly muted as well, save for a bit of peanut butter and a touch of rock candy sweetness, with any semblance of pepper showing up on only one of the three samples.

While the flavor in the first puffs of the Quesada Oktoberfest Salomon Press isn’t particularly peppery, it is rather upfront with body, as I’m greeted by a woody taste on the lips. The pepper doesn’t lag too far behind, showing up by the time the burn line reaches the largest ring gauge offered on the foot. The retrohales offer a decidedly different experience, with more chalk and a bit of white pepper that offer a gentle brush with the olfactory nerves rather than a tingle or punch. There’s a bit of work required to get a significant amount of air flowing through the cigar, and at times it definitely feels similar to the experience of getting a cold milkshake through a straw. Almost on queue, the ash from the first cigar breaks off at the point where the press begins. After that point I generally get much more pepper in the nose than I am on the tongue, creating an interesting sensation as based on what I taste I wouldn’t necessarily describe this as a pepper-laden cigar, but when the smoke gets in the nose that description has to do a 180 degree about face. One sample delivered a particularly distasteful metallic note that hit the tip of my tongue and overtook the otherwise enjoyable flavors in its shadows, though it could have been attributed to a bit of buildup at the head of the cigar. A quick clip seemed to rid the cigar of the bulk of the taste, a trick I learned at a very famous cigar retailer in Las Vegas. There isn’t much change in flavor heading into the second third, as touches of chalk stay in the forefront and are more on the tongue than they had been earlier. Pepper still isn’t much of a factor, and in some ways the flavor neither excites my palate or offers much to describe. There’s bits of wood in there as well, but little that stands up and commands my attention. What does command my attention about the Quesada Oktoberfest Salomon Press is the burn, as all three cigars smoked for this review burn well until the midpoint, when they hit a roadblock in one form or another and begin presenting worrisome  issues. On the first, something on one side obstructs the burn, while the second and third cigars had issues staying lit around midpoint, with the draw also seems to tighten up a bit in both samples. Assuming those can get cleared without too much frustration, the pronounced wood component to the flavor steps forward in the middle of the second third as the flavor dries out significantly and touches of char become more common. The last few puffs before the cigar enters the home stretch get a bit more gruff and certainly drier. Burn issues return to prevalence in the final third, largely distracting from any flavor that the Quesada Oktoberfest Salomon Press offers. It gets to a point where I finally snip off even more of the cap of the third sample in hopes that increasing the air flow will do something to get these cigars to burn down to a respectable finish, which it seems to do. However it doesn’t totally shake some of that metallic note that creeped in earlier, and I find myself reaching for a glass of water to cleanse my palate all too often. The char has turned harsh, and while the increased air flow from a second clipping of the head has helped the burn, I can’t say the flavors are much to praise. Some fleeting notes of neutral wood try and salvage things, but it only takes a few puffs to realize that it’s time to put this cigar where it belongs—in the ashtray. For a company that has been on the extended roll that Quesada has been on, the performance and flavor of the Oktobefest Salomon Press comes as a pretty big surprise and disappointment. Not having tried the other vitolas in this year's release, I'm not sure if it's the blend or the vitola that generated problems in both the flavor and technical realms, but either way I find myself hoping that this experience has simply been an aberration as the Oktoberfest series has been much better than this cigar suggests.