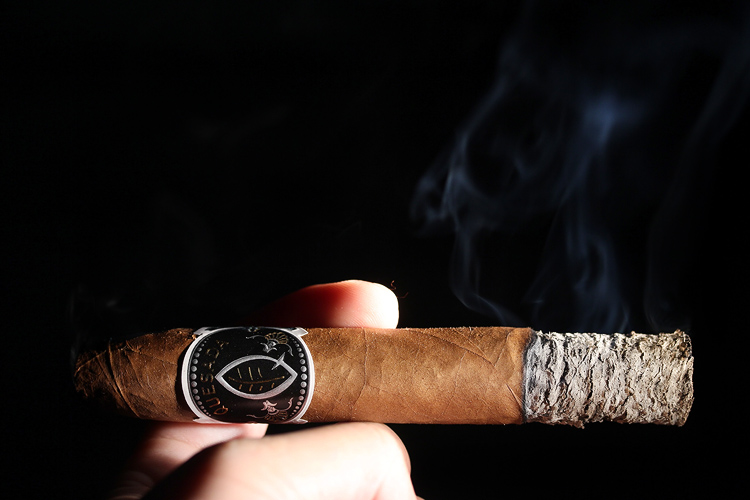 At the 2011 ProCigar festival in the Dominican Republic, the Quesada family showed off its newest creation—the Quesada Selección España. As implied by the name, the cigar was created specifically for the Spanish market and actually made to compete alongside offerings from Habanos S.A.

I described the basics last year:

In February of this past year, Manuel “Manolo” Quesada, head of the SAG Imports/Quesada/MATASA (makers of a lot of brands including the Dominican Fonseca and partners with the Plasencias on Casa Magna) made a mistake. (Yes, let’s repeat, Manolo made a mistake. Well, I guess whoever was responsible for handing out the cigars, Terrence.) At the annual ProCigar Festival, cigar enthusiasts, retailers and makers were given a chance to sample a cigar that was to be made only for Spain, the Quesada Selección España. Three sizes using a peculiar blend that includes an Ecuadorian Arapiraca (a tobacco normally native to Brazil) wrapper over Dominican & Nicaraguan fillers. See the problem was the cigars were good, really good. A few Quesada accounts got ahold of some of the unreleased cigars and liked them, a lot. Very quickly, a cigar that was only supposed to be released in Spain was being demanded amongst the top Quesada accounts in the U.S., and by March, the Españas were stateside. There are a lot of explanations as to why the España isn’t supposed to be offered in the U.S., one of them is the formats: Corona (5 1/2 x 42), Robusto (5 x 52) & Short Robusto (4 x 50). Quesada believes that the sizes, combined with the pricepoints (which are a bit higher than your typical stick) are not conducive to the U.S. markets. They are however competitive in the Spanish market, where Cuban cigars are legal and dominant. Still, given the requests, Quesada has given a handful of U.S. accounts access to a few boxes a month, but it’s rather limited and the plan is to keep it that way.

While SAG Imports, the distribution arm for the Quesada family was able to open some additional accounts throughout the year, the España remains in short supply in Spain, let alone the U.S. where the cigar enjoyed high demand. The Quesadas looked for ways to bring the España to more domestic accounts and ultimately found their solution in a ten year-old wrapper from Nestor Plasencia, something announced a few weeks ago.

Unfortunately, the wrapper on the España is an unusual variety and very rare; it is an arapiraca seed grown in Ecuador. this has made increasing production to accommodate the US market impossible; however, we wanted to produce a cigar in the same vein for the US market and have created the Quesada Jalapa. the binder and fillers of this cigar are exactly the same as the España but the wrapper is a gorgeous claro from the Jalapa region in Nicaragua. Grown in 2002 as an experimental crop by Nestor Plasencia, only a few hundred bales were produced and Manuel Quesada purchased the majority of them.

The Quesada Jalapa will come in three sizes, each limited to 1,000 boxes of 10 cigars. 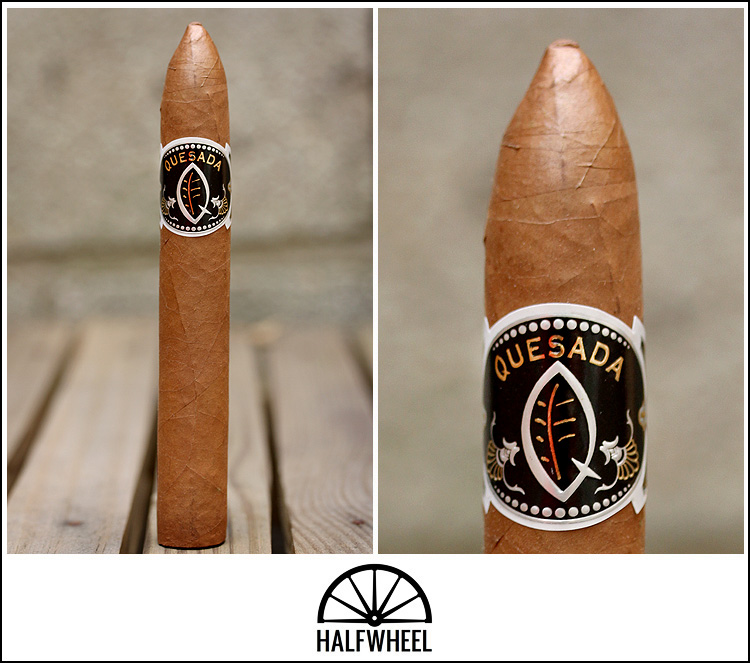 The Nicaraguan wrapper is a bit sandier with less brown than the Ecuadorian wrapper on the España. Quite frankly, it reminds me a lot of the tone of many of Padrón’s Anniversarios in Natural form. One thing that really sticks out to you is how circular the foot is—at least on mine, which never made it into a box presumably, the foot is a near perfect circle—something you nearly never see. Aroma off the wrapper is sweet nuts, earth a touch of leather and some creaminess right around medium-full. From the foot it’s orange peel, creaminess, nuts, earth, a mild sweet cedar and a touch of spices. Cold draw exhibits the right amount of tightness and the Belicoso delivers nuts with a distinct pine and a chocolate and almond core that becomes prominent after the up front notes. There’s a touch of pepper, but it is nearly impossible to detect.

The first third of the Quesada Jalapa begins with a creaminess, nuttiness and cedars with touches of orange peel and black pepper. Both Draw and smoke production could be better for the first few puffs, but each turnaround quite quickly. I’m not going to talk about the burn, besides in the final notes, but it is truly unreal for the first inch. Flavor settles to an intense buttery cedar with nuts, grassiness and a creamy generic woodsiness. Smooth is the key word. 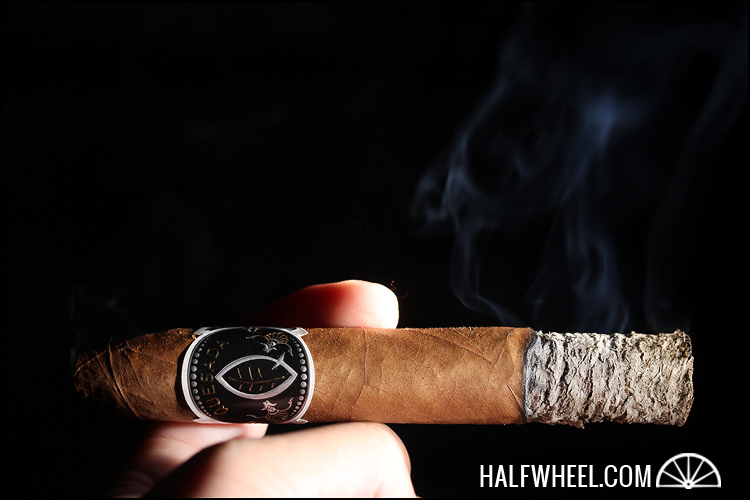 Into the second third and the butter cedar notes remains with a bit of earth and aged tobacco coming through. I will say on both Belicosos and the one Robusto I smoked, the second third is really somewhat chaotic. It’s never concerning, but every few puffs orange peel breaks out to the top of the flavor and occasionally the leather and coffee mixture combines with the earth—something that really stands out in the España. However, for the most part, the Jalapa remains this unique buttery cedar combination. Smoke production is above average with plenty of room to play with smoking speed without any effect on flavor or burn and the draw remains perfect for me, a tad bit tight, but very easy. 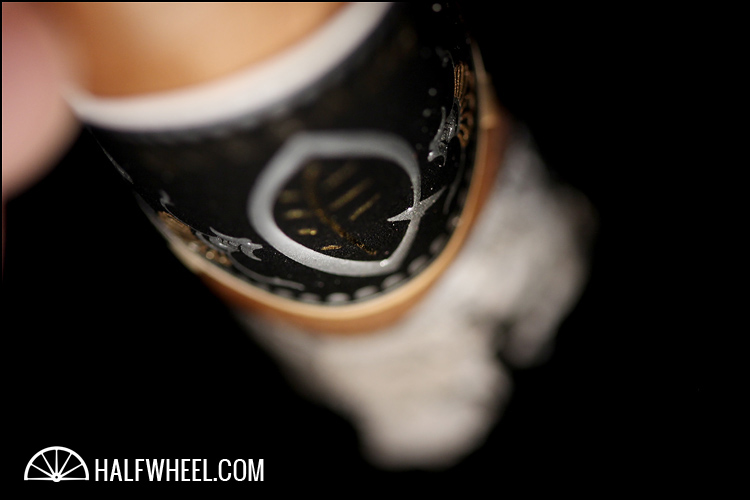 The final third sees a bit of toastiness through the nose and the end to the buttery cedar. Ultimately, the Quesada turns into a creaminess and light meatiness over some young charred earth. Towards the final inch a black pepper develops for the first time—an indicator of youth and where I am in the cigar more than anything else. Construction remains the same up until the inch mark where the Quesada Jalapa begins to die, something I let it do gracefully. 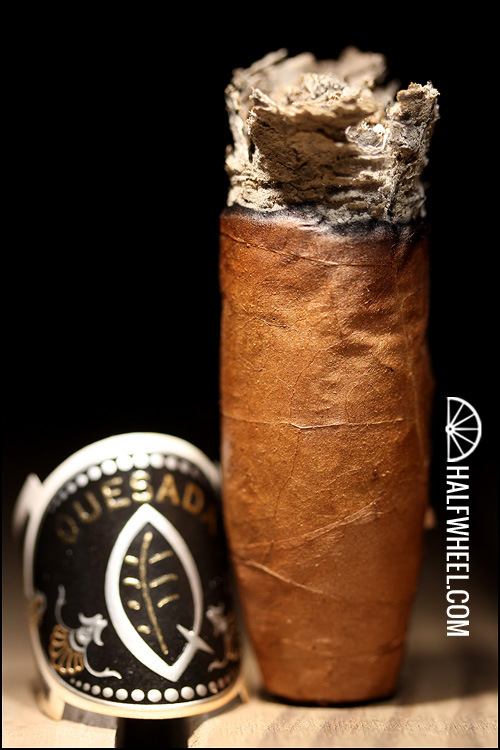 The question you are wondering is does this taste like the España? Unequivocally, no; not even close. And that is a good thing. The Quesada Jalapa is a very good cigar right now and dare-I-say-it, I like the line better than the España. This is not a cigar really made to compete with anything. With so much of the market focused on putting out Ecuadorian Connecticut-wrapped cigars made to have bolder flavor and bigger bodies for a more advanced consumer, the Jalapa just accomplishes the end goal better. The smoothness is there, the buttery flavor is easy to pick out, the creaminess somehow differentiates itself and there are reminders of complexities like orange peel and leather along the way. This isn't España, this isn't the new Connecticuts, this isn't like anything Quesada has put out on the market—plain and simple, it's just shockingly good.