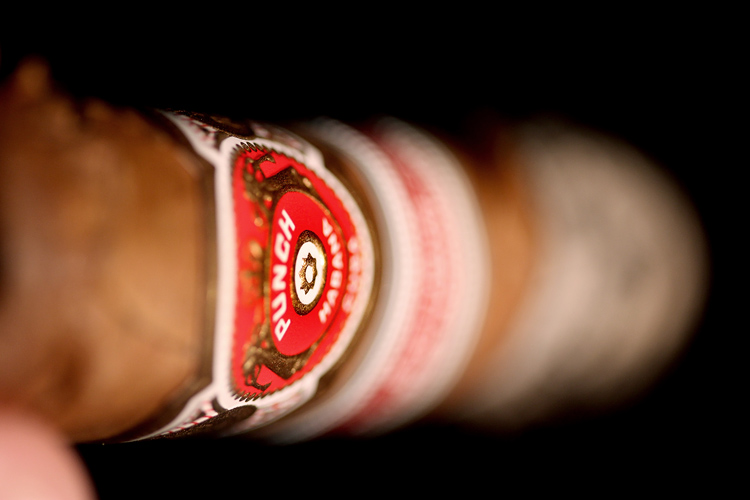 At one point in time, Punch was the strongest brand in the world. Today, not so much.

Despite not having the status similar to Cohiba, Montecristo or Romeo y Julieta, Punch has dominated the Edición Regional series with 18 of the 105 released ERs baring the Punch crown, second only to Ramón Allones’ 19 releases.

As Patrick explained in the Por Larrañaga Robusto review:

The Punch Northern Lights is the only release exclusive to Habanos Nordic, the distributor for Denmark, Finland, Iceland, Norway and Sweden.

For Punch, 2009 was a huge year for ERs as there was six releases:

The Northern Lights is one of the smallest cigars to be part of the ER series at just 4 1/3 x 52 and the second smallest release size with just 1,500 individually numbered boxes of 10 being commissioned.

So. The wrapper is weak. This one didn’t fare well and neither did the first one I smoked. Even for Cuba this was frail, but more on that below. The Northern Lights doesn’t do well in the aroma category: disgusting ammonia and barnyard, although it’s honestly not that strong. From the foot there’s a bit of cereal and ammonia. The cold draw is where the aroma of the wrapper really comes alive, while the flavor through the cigar displays a bit of twang, bits of dry coffee and chocolate after a necessary application of the draw tools.

The Punch Northern Lights starts off the first third very woodsy with a classic Cuban nuttiness and a bit of twang, although it’s not very full. If you are hoping for classic Punch strength, it’s a bit missing at what I’d describe as medium. Eventually, the flavor settles to mainly cedar, some creaminess, caramel and coffee notes with some spices. Draw is average, although without the draw tools neither would have been smokeable, so take that for what it’s worth.

Into the second third and the Northern Lights’ pace slows down from its frantic first third pace and some grassiness and dryness to the bitter flavor. Both the spice and sweetness die down, ultimately leaving a flavor that is much earthier, even if that’s not the primary note. The classic cedar aroma adds some sweetness and is quite frankly the most enjoyable part of the cigar, even if the smoke production could be better.

The final third sees the burn of the short Punch get warmer, which isn’t something that was necessarily welcomed. A very intriguing chocolate note adds itself into the fray, although the flavor profile is largely becoming linear. The Northern Lights strength peaks in between the second and final thirds at medium-full and quickly begins to fall off into the final third. Eventually, the warming smoke and struggling burn force me to put down this cigar pretty early.

I don't mind paying $20 for a good cigar, even if it's tiny. The market is flooded with plenty of cigars with big prices incapable of coming close to deliver par. However, what becomes particularly frustrating is when there's a cigar with an obnoxious price tag that is only average, welcome to the Northern Lights. At $8, this would still seem a bit oversized on size alone, but you could at least justify it occasionally. But, at $20 per cigar, which is the absolute low-end of what they retailed for when released, this is just impossible to justify.