Today we’re looking at the Prometheus 2012 Limited Edition 20th Anniversary Ultimo X lighter. Established in 1992, Prometheus International, Inc. started out exclusively as a lighter company. Since then it has grown to include all sorts of cigar accessories besides lighters, including cutters, humidors and more. In 2004 Keith Park, owner of Prometheus, expanded into the cigar business even further by partnering with the Fuentes to create the God of Fire cigar company.

In addition to the regular accessory production lines, Prometheus has come out with many limited edition accessories for different companies. They have also celebrated milestone anniversaries of their own with limited edition accessories, the latest of which is the 2012 Limited Edition 20th Anniversary line which we wrote about here. Part of that line is the Ultimo X lighter, which is available in both black and white.

The lighter itself is quite beautiful, with a gorgeous chrome and lacquered finish, sporting the Prometheus logo on one side and the 20th Anniversary logo on the other. Normally this model comes in five different designs – blank white or black lacquer and three silver metal designs. The lacquered finish—while beautiful—is very delicate. Since it doesn’t come with a case of some type, I wouldn’t put it in your pocket with any keys or any other hard-edged objects. As long as you don’t throw it around or slide it along rough surfaces though, it should hold up fine. Having found another one of my lighter’s case that fits it perfectly, I’ve been able to carry it around and use it for a month now without getting any scuffs or scrapes on it. Getting into the features of the Ultimo X you can see an easy to operate design. When held between your thumb and index finger, it makes it easy to flip the lid open with your thumb, slide down to press the side lever to ignite the triple flame torch, then when you’re finished you can nudge the lid closed again with the side of your index finger. The triple flame design is an interesting one. It has all three nozzles in a row instead of clustered together and the outer two nozzles pointed slightly inward to create the finest point I’ve seen on a triple flame lighter. On the side you have an oversized, easy to read fuel window. Along the bottom there is a swing out 7mm cigar punch that when closed allows the refill nozzle and flame adjustment to poke through the hole. While the lighter itself is pretty large, even to the point of almost filling up your hand when held, it still fits easily into your pocket without seeming too bulky or taking up too much room. I think the size is perfect because it allows for as big a fuel tank as possible without getting into a larger format, and with a triple flame the possibility is there to eat through fuel much quicker than a single flame lighter would. It also has a decent weight to it, giving off an air of quality to the build that a lighter weighing less would not. The month that I’ve had this lighter I’ve tried to use it for every cigar I smoked, whether or not I normally would reach for a triple flame lighter. I’ve also used the punch for every cigar as well, unless it was a torpedo or ended up needing a larger opening. The punch is quite sharp and didn’t have a problem with any cigar, from the most delicate to the thickest wrappers. It is fairly consistent with lighting successfully most of the time on the first push of the lever. Sometimes it would take two pushes to get it lit, which happened more if I had the flame output turned down lower. 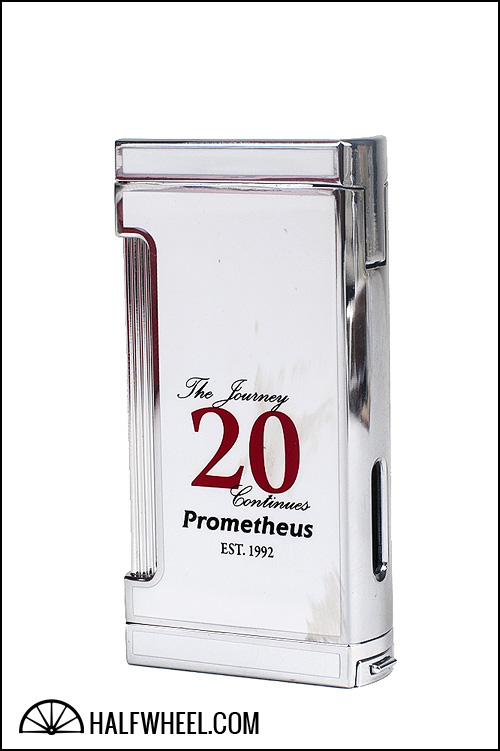 As far as the flame’s adjustability is concerned there is actually only a very small area that it successfully works in. Just like most torch lighters it is very hard to consistently get it to light, or even get it to light at all, when turned down below 50%. Around 75% you’re getting a more consistent light with flames that don’t stand up to wind very well but do conserve the fuel better. Fully open the flames are nearly two inches long, burning through the fuel fairly quickly and incinerating anything that gets closer than six inches away from the tip of the flame. The sweet spot I found was around 85% open, which allowed the flames to stand up well against wind, didn’t require me to hold the cigar eight inches away to light it and let the fuel last for lighting around 10 cigars. XIKAR would probably be the closest competition, specifically the Trezo triple flame lighter. It also boasts an inline triple nozzle design with the outer two nozzles pointed inward to create a more defined flame. The only thing I would say the Trezo has over the Ultimo X is the oversized flame adjustment wheel, allowing you to adjust it without a tool. Otherwise, it is lacking the punch cutter, it is $10 more than the Limited Edition Ultimo X and in my opinion doesn’t look nearly as good. I’ve enjoyed using this lighter. While I wouldn’t use it for every cigar I smoke, it lights larger ring gauge cigars even faster and more evenly than my single flame Blazer Torch. The punch is an actual nice addition as opposed to a useless feature and it has an easy to use design to top it all off. The things that would cause me to hesitate would be the fact that it’s a triple flame torch lighter and the price point. Triple flame lighters aren’t for everybody, but despite that fact this triple flame lighter still is fairly versatile thanks to the in line, angled nozzle design. As far as the price point is concerned, if you want a beautiful, sophisticated looking lighter you’re going to pay for it no matter what the brand is, and the Ultimo X is actually cheaper than some other high-end lighters. Comparing it to your other options out there for similar lighters, it seems that the 2012 Limited Edition 20th Anniversary Ultimo X is an easy choice.