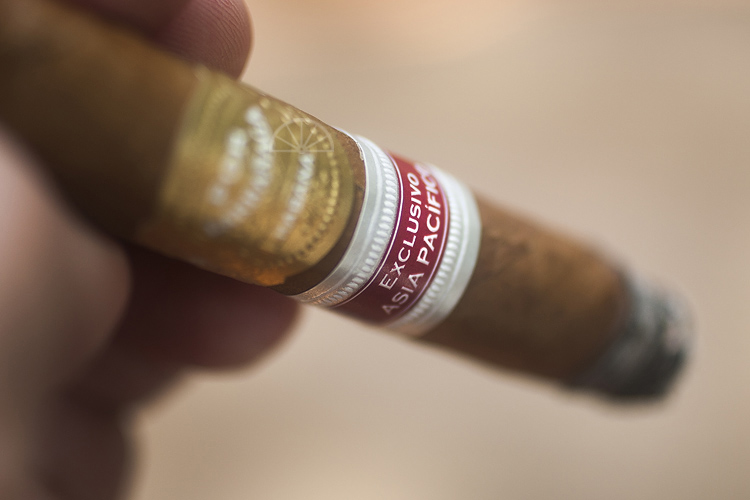 In 2010, Habanos S.A.’s Edición Regional series was in its fifth year of existence and the number of the releases seemed to show no signs of slowing down. One of the most intriguing of the 2010 releases was the Por Larrañaga Edición Regional Asia Pacifico Encantos, which was produced for the Asia Pacific region and distributed by Pacific Cigars. The 6 3/4 x 43 Encantos is to date, the longest of any of the marca’s Edición Regional releases.

The Edición Regional program started in 2005 and utilizes the 17 local and multi-local brands for their releases exempting the ten worldwide premium global and niche brands. The cigars are limited production releases with a minimum run of 25,000 cigars and are made exclusively for a regional market, which can range from a specific country to a geographic region.
They are available for one to two years, after which time the cigar can be added to the line’s current production range. The vitolas used for Edición Regional releases must be selected from current production vitolas, but ones that are not already used by that line
In addition, recent changes, as noted by Trevor Leask of CubanCigarWebsite.com, have included a lifespan of 12 months with release dates generally in August, September and October. In addition, while some regions have received multiple releases in a calendar year, it has been reported that starting in 2012 Edición Regional releases will be limited to one per distributor
Finally, the cigars generally use the marca’s main band with a second red and silver band that indicates the region it was made for, in the format “Exclusivo ___” with the region’s name in Spanish. Neither Por Larrañaga nor Alemania was part of the inaugural group of Edición Regional cigars in 2005 – Italy and Switzerland each got a Punch and Ramón Allones release that year.

The official press release for the Encantos had some details on the cigar:

Por Larranage Encanto, a cigar of the Dalias shape with a girth of 43 and a length of 170mm. A 2010 Regional Edition Cigar was made by Habanos S.A. for Asia Pacific smokers by the request of The Pacific Cigar Company, this size & shape resembles the Ramon Allones 8-9-8 that was discontinued by Habanos S.A. some years ago.

Available in all leading cigar stores in Asia, this is a never-made before size of the Por Larranage brand. Bearing the brand characteristic taste of subtle herbal sweetness tingle with slight spice, pepper and earthiness, it has a mid to full body with slight creaminess. This is a well-constructed cigar for savoring now. As in all Habanos, it is also a cigar with aging potential.

The Por Larrañaga Encantos is a beautiful looking cigar with a honey brown wrapper that is smooth to the touch. There are some bumps up and down the cigar, as well as some veins noticeable, but the overall look is still gorgeous. There is a little more give than I would like when the cigar is squeezed, while the aroma coming off of the wrapper is a combination of sweet hay, barnyard, manure and leather.

The Por Larrañaga starts out quickly with distinct flavors of leather, cedar, sweet hay, earth, and chocolate. There is a wonderful honey sweetness that is very noticeable, but only on the retrohale, and a tiny amount of white pepper ebbs in and out. Construction-wise, the draw is a bit tighter than I would like, but still within acceptable limits and the burn is giving me no problems at all. The overall strength rises to a milder medium by the end of the first third.

As the second third of the Edición Regional Asia Pacifico begins, the base profile remains close to the same with sweet hay, earth, chocolate, wood and leather, there is some added tart lemon that I taste every now and then as well. However, the major change is in the sweetness, which has morphed from a honey to a caramel note that combines wonderfully with the rest of the flavors. The amount of white pepper on the retrohale remains consistent with the first third, and the strength has barely moved, ending the second third just under the medium mark.

The final third of the Por Larrañaga Encantos adds a noticeable floral note that really sets off the slightly diminished caramel sweetness from the second third. The other flavors of earth, leather, hay, coffee, light chocolate and hay ebb in and out, while the white pepper on the retrohale continues to be a great addition. Strength-wise, the Encantos hits the medium mark, but goes no higher, and the burn and draw are both excellent until the end of the cigar.

As I am sure many of you long time readers are aware after all these years, I struggle to find Cuban Edición Regionals that I really love. Most samples I have smoked have been underwhelming at best, and just plain awful at worst, regardless of marca. Thankfully, the Por Larrañaga Edición Regional Asia Pacifico Encantos is not one of those. While the strength in the cigar is fairly light, the profile is sweet and woody, very complex, ever changing and extremely well balanced. I absolutely love the Dalias vitola, and I think it was a perfect choice for this blend. This will continue to age well, and my only regret is not picking up more of them.