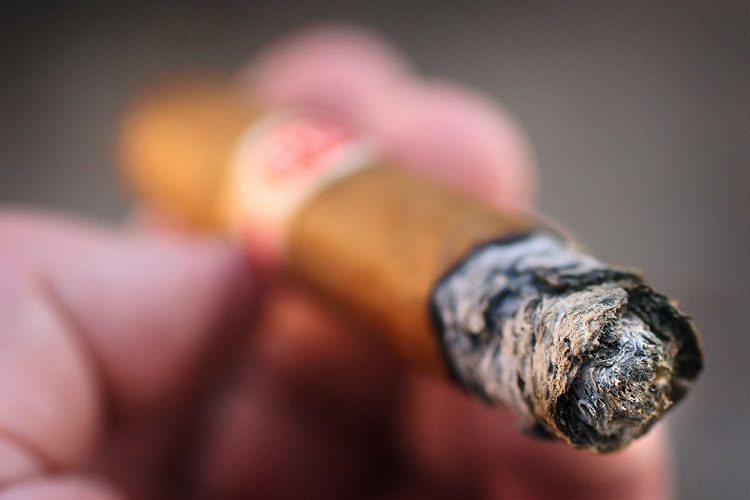 Today is the first non-Cuban cigar that will qualify as “vintage” as per our standards and it comes from Dr. Paul Garmirian. Paul Garmirian has been around the cigar business for a while and may well be one of the most interesting cigar brands you have never heard of.

Rather than rewrite what has already been said, I will quote Charlie from his review of the Paul Garmirian Reserva Exclusiva Gran Panatela:

Where do you start when it comes to Paul Garmirian. The place to start is probably his book, The Gourmet Guide to Cigars, which was published in 1990. Later that year, he introduced his first line of cigars at Georgetown Tobacco, a tobacconist he had long been associated with, and in 1991, the TABADOM-made cigars were released nationally in six sizes. The Reserva Exclusiva line was introduced in 2001, made like the every other Paul Garmirian cigar by Henke Kelner and Eladio Diaz. The big selling point is ten-year old tobacco, something Garmirian has grown a reputation for. All PG Cigars are aged for a minimum of a year after rolling and most feature fairly aged tobaccos. What’s a bit surprising is that the price of the Reserva Exclusiva line is identical in price to Garmirian’s core line, the Gourmet Series.

If that was not interesting enough, we get to the cigar that we are reviewing today.

When Paul Garmirian officially released his first line of cigars on May 1st, 1991, dubbed simply the “PG” Line, there were six original vitolas, all of them classic Cuban sizes. They were:

While I have never seen a cigar from that original release, I got an email in my inbox recently that announced that Jack Schwartz had received a few boxes of different sizes of cigars from PG that were rolled back in 1995 and then put into storage to await a future release. I thought it was pretty cool that a cigar manufacturer would go through the effort to not only save enough boxes, which I am sure most do to differing degrees, but to then send those cigars to a specific store to sell to customers, at MSRP. I thought the story was interesting, so I picked up a five pack to see what I thought.

Here is what the boxes of Paul Garmirian rolled in 1995 look like: The Corona Grande is an obviously aged cigar with a light brown Colorado wrapper that has no oil present at all. There’s a slight box-press and has the perfect give when squeezed. The wrapper has some bumps on it, but is smooth as silk when you run your finger down the length. It smells wonderful: a combination of extremely sweet chocolate, cinnamon and cedar. I am really hoping at this point, before I smoke it that the Paul Garmirian tastes it as good as it smells.

It begins with just the tiniest amount of spice on the lips in the first third, along with strong flavors of sweet chocolate, coffee, leather and cinnamon. There is a slight bitterness underneath all of the flavors, but it is not that strong to begin with and is reduced to nothing by the time the first third of the Corona Grande ends, a great start for such an aged cigar. The second third of the PG has flavors flying from all over the place. Sweet chocolate is still the dominant note, but I also tasted nuts, leather, espresso, cedar and even a bit of mint, albeit only on the retrohale. The spice is gone totally, but there is a touch of pepper here and there. Burn of the Corona Grande is perfect up to this point, but no strength at all — I put it at a strong mild by the end of the second third and that is being generous. As for the final third, it is much the same as the second third flavor-wise, but there is quite a bit more sweetness in the profile and an added floral note that was quite distinct. The Paul Garmirian is still quite mild strength-wise ending the way it began, at a mild plus. Draw and burn are still spot on. It is easy to nub and kind of wish the Corona Grande was a bit larger by the end. The Bottom Line: When I heard about these being sold, I bought some mainly out of curiosity. I think it is pretty cool that Garmirian saved these himself to release at a later point. I thought there was no way that a cigar that was fairly mild to begin with could have much left after 16 years. Well, I am happy to say I was wrong. Although it WAS quite mild, there was an impressive amount of flavor and complexity that came out of the Corona Grande and the construction was phenomenal. It would make a WONDERFUL morning cigar, and now I am wishing I had purchased a box before they sold out.