A few months ago, Ernesto Padilla announced he was—for lack of a better term—blowing up his portfolio. Gone were the staples such as 1932 and Miami, as well as new lines such as Artemis and Dominus. While the La Terraza and Legacies, both introduced last year, will continue to be made—Padilla is introducing a series of new lines reshaping his portfolio.

Four new lines are being introduced:

While the Invictus and Miami Maduro use the same fillers, Nicaraguan mixture from Aganorsa, ASP and Oliva, Padilla said the difference in blend was not simply the wrapper.

The three sizes of Miami Maduro are:

Padilla has said he will only open up 100 accounts this year for both the Invictus and Miami Maduro. In addition, the cigars are rolled every two months, limited to 100 boxes of each size. 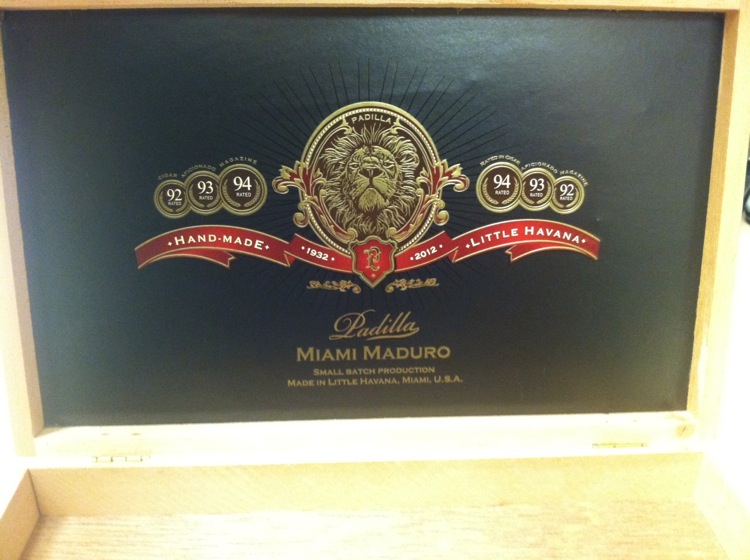 If I had to guess, Ecuadorian habano would have been my choice. The color of the Mexican wrapper is just somewhat faded. There’s little oil, although it’s much more noticeable to the touch than eye, and it’s a lot rougher than much of what is coming out of Mexico these days, but there’s a decent leather and barnyard. For the most part, the roll is good, but the roughness of the wrapper and the coloring around the cap give an outward appearance that would suggest otherwise. From the foot, there’s bark, leather coco and some spices on the nose, incredibly soft and pales in comparison to the San Andrés. Cold draw from the Miami Maduro is a bit tight with a heavy bark, sweet cocoa, coffee and a hint of lemon on the finish.

The Padilla begins with a generic woodsy, cocoa and toasty aroma. Unfortunately, the draw is tight and the cigar takes a bit more to get going than normal, but rather quickly my taste buds are salivating heavily due to a woodsy and cocoa mixture. This deepens with some nuts before the toastiness and pepper emerge. There’s a sweet finish with a bit of a bite. One inch and the cigar settles with toastiness, woodsiness, some bitter cocoa and a touch of harsh earth. There’s a bit of black pepper up front, but it’s far from the full-bodied nature Padilla has delivered in the past. Unfortunately, the draw remains a bit tight well into the second third of the Miami Maduro. Flavor really begins to show its youth: earthiness and charred cocoa over creaminess, nuttiness and some barnyard. Strength is now on the lighter side of medium-full, definitely less than what the Padilla began with. Draw begins to open up while smoke production remains the same—well above average. Overall, with the exception of the draw, there’s zero complaints about the construction of the Padilla—decent weight to the smoke itself and an excellent ash. The final third sees the charred cocoa and earth mix with some creaminess. I was hoping the barnyard, cocoa or perhaps a new flavor would break through—but there was nothing. Draw continued to loosen, beginning solidly in the center, something I wish the Miami Maduro would have done before. Finally, the burn lines start to go and I eventually call it quits. Ernesto Padilla has not struggled with the task of making good cigars. The reality is, his early 2011 portfolio would stack up quite well against a lot of bigger names in a blind shoot-out. His problem, to put it bluntly, is whether or not the brick and mortar shops will be willing to reinvest with him. His decision to reshape the portfolio was one that was necessary, and quite frankly—a huge step forward in that regard. The four lines he got rid of were all discounted in fairly significant ways across the major catalogs making it difficult for retailers to compete. He has stressed his new lines are for the brick and mortars and if enough of them get behind him—it can stay that way. As for Miami Maduro, this is not his finest work. While I think the cigar will get better, perhaps even a lot better, with more than a month in the humidor—this is not the cigar I see reinventing Padilla, even absent the price point. I'd rather pay $12.00 for La Terraza, something Padilla probably doesn't want to hear. Miami Maduro is a good cigar, and better than the current state of three of the four lines discontinued, but unfortunately Ernesto has made a lot better cigars—a few even in the last year.